How to Paint Everything: Squats

Well we’re three years into 2nd edition, and most of the armies in the Codex Army List Supplements have been expanded into full army books, which makes a change from White Dwarf articles you have to carry around or compendium books. Some armies in 1st edition had gotten to the point where you had to carry as many as 3 copies of White Dwarf or both compendiums as well as the rulebook just to play a game, and it’s good to see GW tackle this rules bloat.

With the release of Codex: Angels of Death Space Marines now have a massive 3 codexes to choose from, and with Codex: Chaos releasing the only armies without codexes are Genestealer Cults and Squats, both of which are firm fan favourites and sure to get a new book soon. So let’s dive into the lore of these wonderful bearded warriors and how to paint (and convert) them for games in Warhammer 40,000.

Who are the Squats?

The Squats most recently got a full fluff update and rundown in the 2nd edition starter box’s Codex: Imperialis book, which detailed the armies and settings of the 41st millennium. A species of abhumans descended from the ancient pioneers who first settled the planets near the stars of the galactic core, the Squats have been shaped by harsh, rocky environments, monotonous diets, and high gravity into stout, hardy beings. Cut off for thousands of years between the Age of Strife and the Horus Heresy, the Squats re-emerged as a galactic force when the warp storms keeping them cut off were dissipated by the shockwaves sent out by the birth of Slaanesh. Re-emerging into the galaxy after the Time of Isolation, they’re a force to be reckoned with – they’re tough warriors and capable weaponsmiths, able to use their vast wealth of minerals and rare metals to create fantastic war machines. These days, they trade and deal openly with the Imperium and relations are relatively peaceful between the two races.  After all, they share many common enemies – the Squats have a bitter enmity for Orks, having fought a number of devastating wars against the green tide over planets in their homeworld empire.

Squat society is separated into a series of semi-autonomous groups called the 700 Leagues. These groups operate independently but work together in times of need and typically encompass a series of fortified outposts called Strongholds. The largest and most powerful of these is the League of Thor, which encompasses some 300 Squat strongholds. Squats preserve their culture, artifice, and engineering knowledge through a series of guilds that operate independently across the strongholds of the Leagues. And it’s important that they do so – the Squats are technologically very capable, and guard their secrets carefully from other races. They regard the tech-priests of the Adeptus Mechanicus as little more than court magicians who wallow in superstition and ignorance. And to be fair, they aren’t far off.

With a fervent fan backing and an amazing backstory, it’s only a matter of time before GW releases the 2nd edition Codex: Squats to mass acclaim.

Squats may look like dawrves – what with the beards and all – but they have a much wider array of sci-fi weaponry at their disposal. They tend to have a wide variety of weapons and wargear to pick from, and can use a variety of schemes, though their heraldry will often resemble that of fantasy dwarves and incorporate runes. Also, you’ll need to have a method for painting beards.

Bair: I’ve started working on a new faction which I am stoked to see expanded on in the coming years, Squats! I mean, dwarfs in SPACE what’s not to love about that? Beards and bolters. But I didn’t want to go the standard green/khaki kind of look and prefer some nice dark colours, so went with a deep blue for the cloth and a nice dark red tone for the armour. I also only used Citadel’s contrast paint range because it’s quicker and looks great on these. 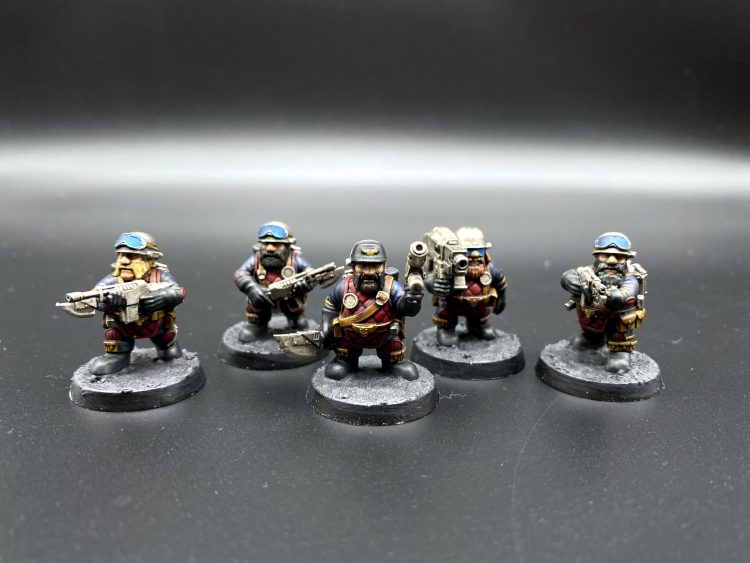 Honestly you can skip all of the browns if you don’t mind having just 1 beard colour, but having the variety is nice to make them stand out as individuals. Similarly, any part that was painted with Basilicanum Grey or Black Templar could have been either or, just having that much more variation between hat and sack is nice.

And that’s all there is to it! My 12-step Squats. Guaranteed to be ready for the battlefield in no time. Really excited to get a few more units done for this army, definitely the army I want to be using in the coming editions of the game!

BuffaloChicken has his own method for painting his Squats, which he fields in 9th edition games as counts-as Grey Knights with a variety of allies. You can find the army showcase for his Squats army here.

How to Paint the Squat Mechanicus Enclave

Yes, there’s no telling what kind of good stuff the future holds in store for Squats as GW prepares its releases for 1997 and we couldn’t be more excited to see the treatment they’ll give the Squats. Hopefully this article has given you some thought about ways to paint this wonderful, unique army. As always, if you have any questions or feedback drop us a note in the comments below or email us at contact@goonhammer.com.