How to Paint Everything: Veteran Guardsmen (Death Korps of Krieg)

With the launch of the Kill Team 2.0 and the Octarius Killzone, Games Workshop unveiled two new kill teams: Veteran Guardsmen and Kommandos, finally giving us full, multi-part plastic kits for each. With the release we finally have plastic kits for the Death Korps of Krieg, giving us wonderfully detailed kits for these long-coated soldiers. The models in the new box are outstanding, and so we’ve set ourselves to work over the past two weeks getting them painted and talking about the process. In today’s How to Paint Everything, we’re walking you through how we painted the brave guardsmen and women of the new kill team.

This scheme was developed as a way to paint a large number of Forgeworld resin Death Korps of Krieg models very efficiently. As much fun as that army project was, I was very glad to see Death Korps redone in glorious plastic. Efficiency, repeatability, and looking good en-masse are the keys to this scheme; which I think it accomplishes. I went with a classic blue-grey greatcoat, yellow calfskin leather, and steel detailing. The calfskin and blue-grey contrast each other well and keep the bare bones infantry squads visually distinct on the table. 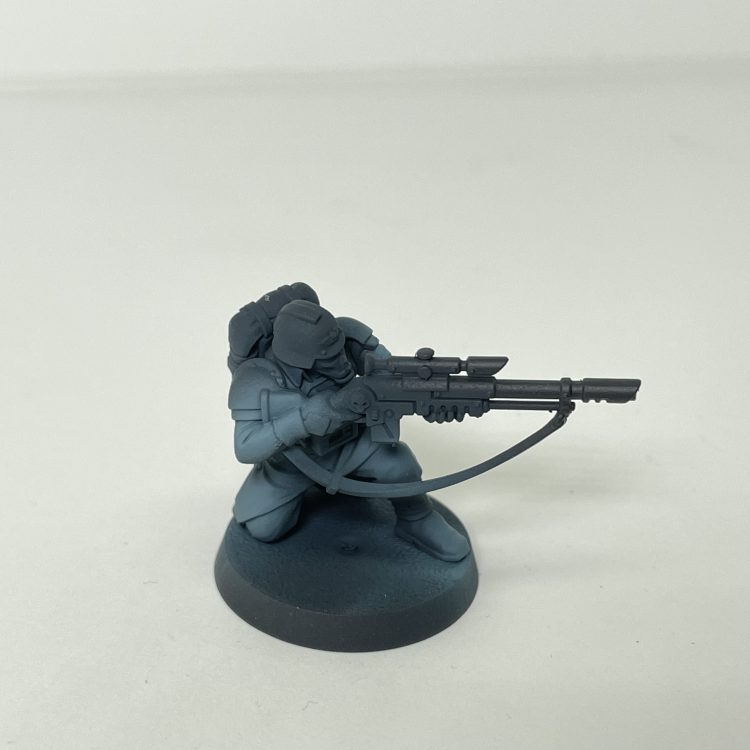 To get the blue-grey for the greatcoat and pants, I first primed the model black. I then did an overall basecoat of Vallejo Game Color Dark Sea Blue. To highlight, I added some Vallejo Game Color Blue Grey Pale to the Dark Sea Blue and concentrated on the arms, upper chest, lower greatcoat, and knees. For the final airbrush highlight I added more Blue Grey Pale to the previous mix. 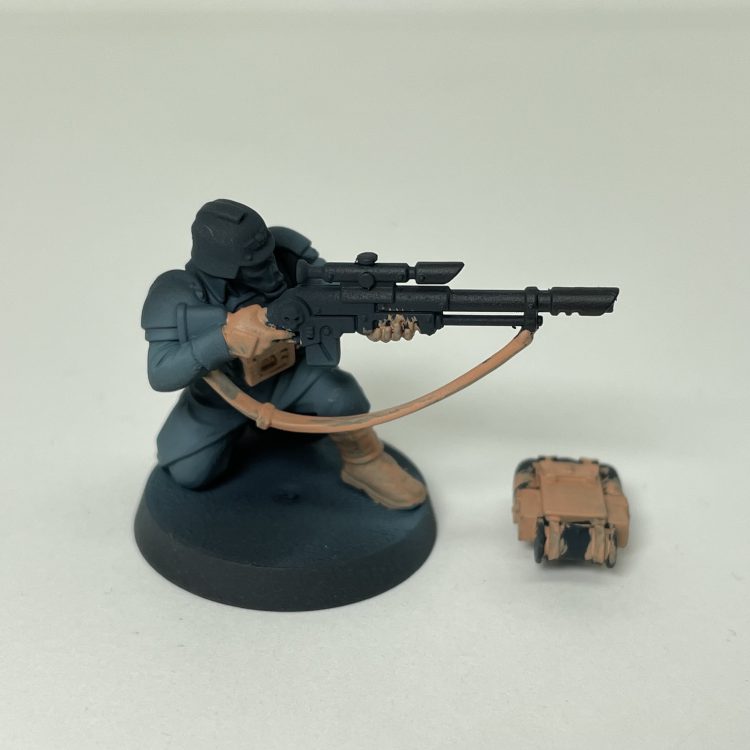 I wanted to get a nice desaturated yellow calfskin leather for the gloves, boots, wraps, and pouches. The decision to paint them all in the same yellow ochre was definitely a decision borne of efficiency, but one that works for what is a horde infantry army. I basecoated the leather boots, wraps, straps, pouches, packs, and gloves with Vallejo Model Color Basic Flesh. 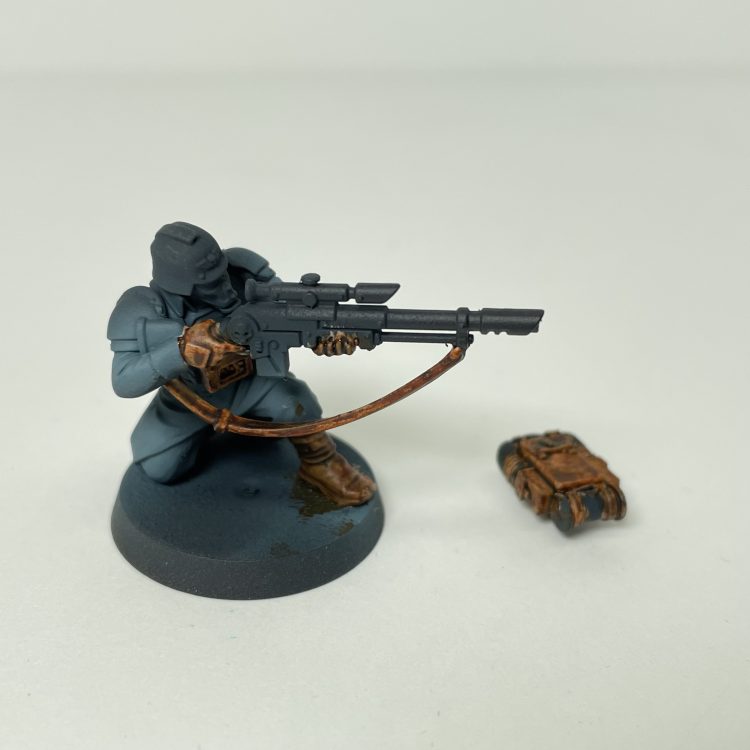 I then washed the leather with Vallejo Game Ink Sepia 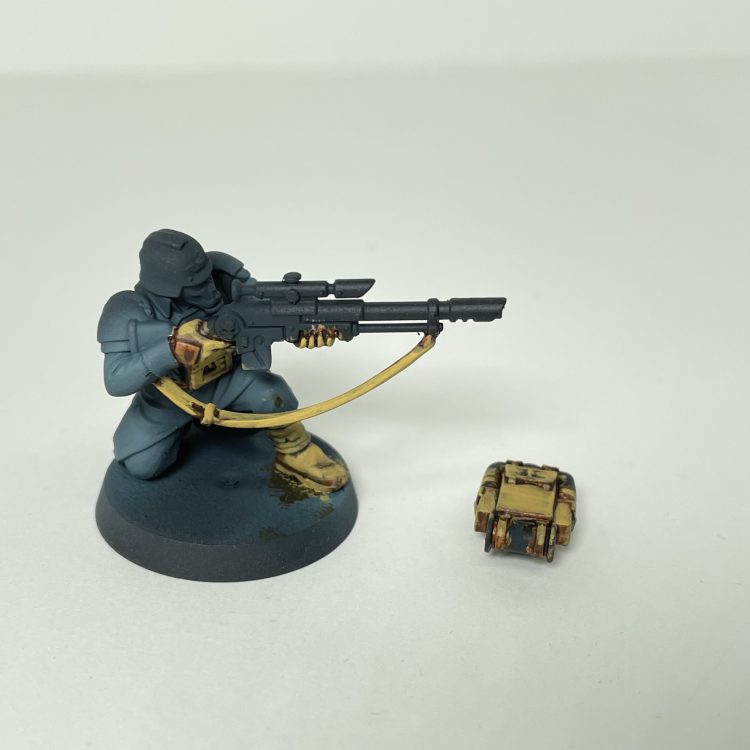 All the leather is highlighted with Vallejo Game Color Yellow Ochre 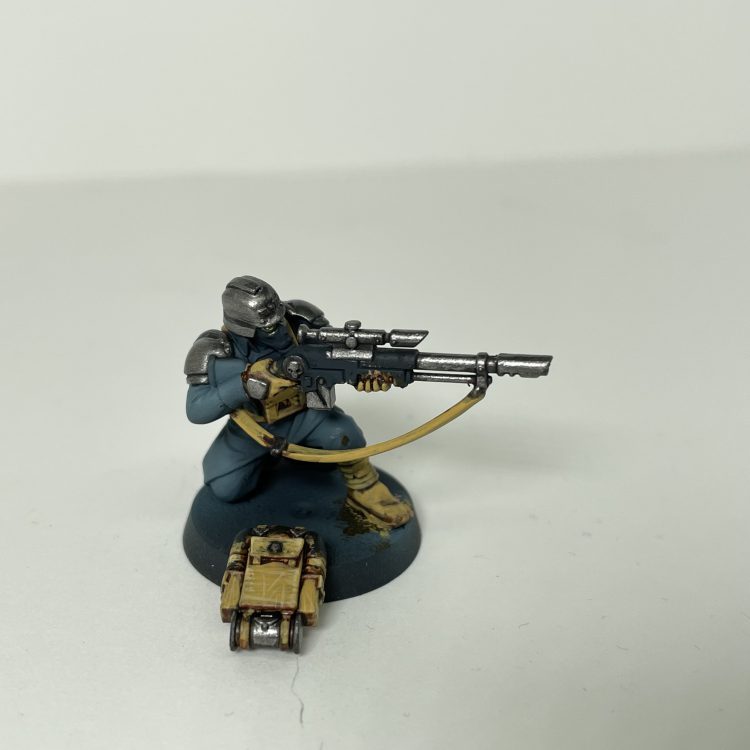 The final highlight/scratches on the leather were made with a 1:2 mix of Yellow Ochre and Vallejo Game Color Ivory 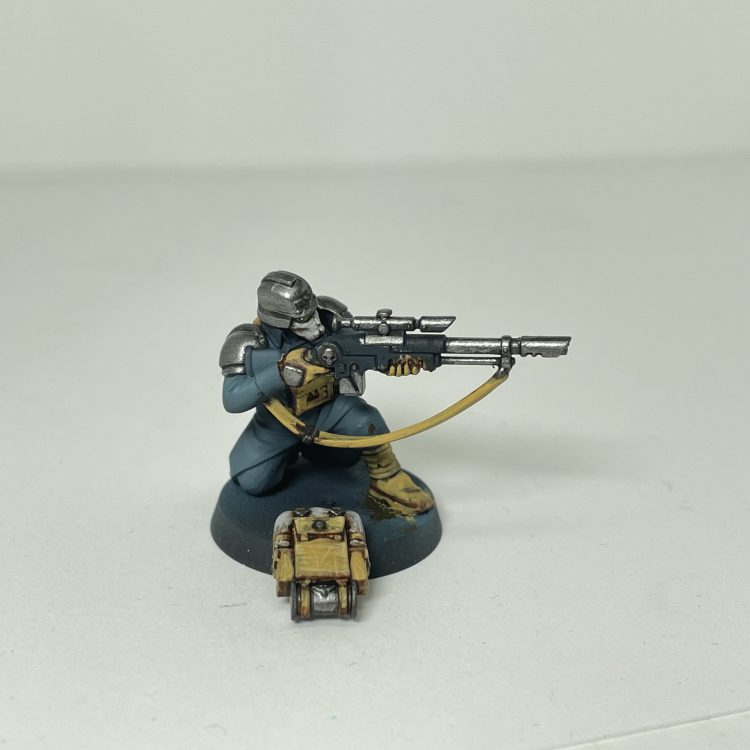 Finishing up the paint, I picked out the helmet eagle with Scale75 Dwarven Gold and edge higlighted the coat using Vallejo Game Color Blue Grey Pale. After all the painting was finished, I gloss varnished the model before the oil wash (I prefer Liquitex Gloss Varnish). This lowers the surface tension of the model, which helps the wash wick into the recesses and also makes cleanup easier/more effective. I use an oil wash of Burnt Umber and a little Black, mixed with W&N Artists’ White Spirits. For the DKOK, I do an overall oil wash on the entire model. After the wash is dry, I use a q-tip dipped in white spirits to gently remove the wash from the raised surfaces, leaving a well developed recess lining and shadow with some grit. I then Matte varnished the model (Vallejo Matte).

I did a very simple basing scheme for the army, using both Agrellan Earth and Agrellan Badlands to get some basic texture on the base. I then did a very thin pigment wash with Isopropyl Alcohol and some clay and brown pigments from Vallejo. Base rim painted black, and the model is finished!

This scheme sounds a lot more complicated than it is, and was really efficient when painting over 100 of the old, tiny, Forgeworld Death Korps models. It was even easier to paint the plastic model, which bodes well for future entrenching-tool-bearers! If you’d like to see full video tutorials for DKOK infantry and armor, you can find them on my Patreon here.

After priming black I gave the models a coat of Vallejo Metal Colour (VMC) Duraluminum, followed by two thin coats of Vallejo Chipping Medium thinned down with water. You might be able to get away with one thicker layer but this stuff is weird to apply through a airbrush, so your experience may vary. After that was just about dry, I applied a coat of Vallejo Model Air (VMA) Yellow Brown that I then chipped back in a few ways to get variety:

Once the chipping is where you want, its crucial that you seal thoroughly with varnish, otherwise washes and later paint layers can reactivate the chipping medium. In my case I am using either Vallejo Mecha Matte or Premium Air Matte, and I am not quite sure how other finishes will affect how the the scheme turns since there are a lot of washes involved.

Do note, that while I describe doing this with a airbrush you could probably do it by hand or rattle can, its just that it might take a lot longer.

Base Coats – Washing away the toils

We start with getting all the metals done, the main aluminum/steel is VMC Duraluminum like under the chipping. The remaining metals are Warplock on the iconography and Balthasar on copper like the power sword power unit. Then the metal and armor panels are washed with Agrax Gloss, this will get us the final sandy beige of the main armor and recess shading on the metals.

I went over anything that will be covered with contrast and the uniforms with the yellow brown to cover up any undesired chipping.

The uniforms are washed with Nuln and Druchii and the leather and rubber is washed with Black Templar.

Since these are just simple edge highlights I will just list out where they go:

This step could be skipped if you want to save some time on hordes of infantry.

Details – More colours then any other step!

Theres a lot going on in here, most of it simpler then the number of paints would imply, for example the lights are just Ushabti and Iyanden.

While only one type is visible on these particular models, the army also has blue lenses, like on this sentinel:

We have a dedicated article explaining Lenses and Gemstones but the general idea is painting successive crescents getting lighter towards one side with a extreme contrast in the other.

For the orange lenses and glow I used Skrag, Trollslayer, Fire Dragon and Ushabti for the main colours and a extreme reflection of Vallejo Model Colour White. The blue lenses are Kantor, Caledor, Calgar, Fenrisian Grey, and the Ushabti plus White from the oranges.

The blade is almost exclusively glazes over Mephiston, you could replicate this by just mixing on your palette to approximate the glazes.

The base colour is Mephiston as mentioned, then there are a few glazes of Squig Orange and Kislev towards the tip of the blade, and black templar glazes to the base of the blade. After the glazing is done, outline the blade with kislev, then towards the tip push the outline brighter with your choice of pure white.

The bases start with Vallejo Dark Earth in a fairly thick layer, this is so I can press it back in a few spots to form the river/lake. Once that dried I put Wyldwood on the river/lake and Agrax on the rest of the base, once dry I then drybrush only the river bank with Steel Legion Drab.

The river is just covered with gloss varnish to get it shiny looking, if you want to get a bit more texture you can use Vallejo Transparent Water Effects to add in white water that you can push a bit further with a overloaded drybrush of pallid wych. A word of warning on the thicc water, it seems to have difficulty drying completely clear which is fine for rough water but I am not particularly impressed with it.

With the rest of the models done its just painting the rims in Dryad Bark and adding tufts, for this army I am using these ones from Gamers Grass:

Now that we are done with the squad its time to huck them in the photo booth and get some final pictures!

“Former Golden Demon winner Colin Ward” is a hard act to follow in a painting article, but I’m assuming at least some of you out there are also tabletop-level painters and would appreciate a write-up along the lines of “how to imitate the box art closely enough to be passable.”

That means the new-style green scheme, for which I utsed Waaagh Flesh as the base with Death Guard Green highlights on the folds in the coat. Straps and leather are a base of Dryad Bark layered with Steel Legion Drab, with some Seraphim Sepia in the recesses (particularly on the pack) and on the gas mask, which then received another highlight layer of Steel Legion Drab after. The boots were mainly Dryad Bark, with a mix of Steel Legion/Dryad around the edges and some thinner Steel Legion to top it off, with the trousers VMC Black Grey washed Nuln Oil and then a few folds picked out in Mechanicum Standard Grey.

The silver metals are just Old Silver from Darkstar Miniatures, and the bronze barrel of the plasma pistol is a layer of Bronze and then Antique Gold, washed Sepia, and then highlighted Antique Gold again. The blue glow of the plasma and the barrel builds up from Teclis Blue through Lothern Blue, Baharroth Blue, and then just a touch of white, and the eyes are Khorne Red to Mephiston Red to just a dot of Wild Rider Red.

Finally there’s the shoulders and the chainsword – both based in VMC Black, and then highlighted Russ Grey with a touch of white for the shoulders, and Mechanicum Standard Grey for the sword.

The entire thing took me around an hour, which is not bad when you’ve got ten of them to do! I’m looking forward to getting the rest of the squad painted up ready for some Kill Team, or as the basis for a future expansion of my existing Astra Militarum army with some newer and shinier models.

It’s cool to finally see the Death Korps get their own plastic models – they’ve been popular for a long time and Kill Team is a great place to release a unit of them, especially one this complex. Hopefully we’ve given you some proper inspiration and you have as much fun painting these as we did. As always, if you have any questions or feedback, you can drop us a note in the comments below or email us at contact@goonhammer.com. And if you’re looking for more tutorials from Colin or a video on painting his Veteran Guardsmen, you can find those at his Patreon.