How To Pet Everything: The Pets of Warhammer 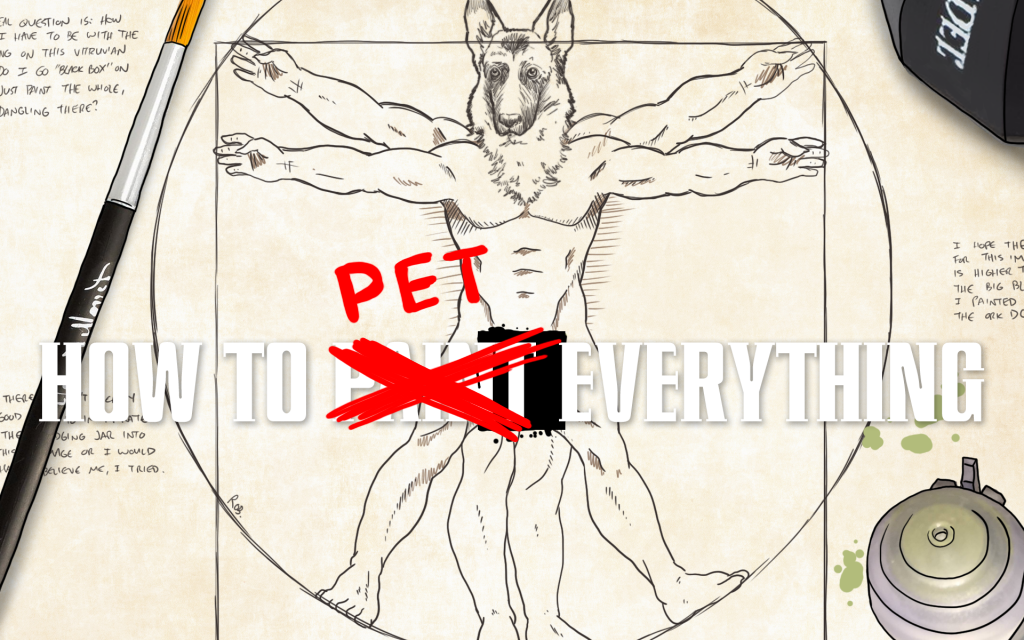 In our How to Paint Everything series, we take a look at different armies of the Warhammer universe, examine their history and heraldry, and look at several different methods for painting them. Today we are answering an extremely important question: Can you pet the dog?

Somehow it took Games Workshop until the end of the 2010s to realize one important fact: People like pets. 40k saw the release of Kill Team: Rogue Trader, which included an extremely good boy, while Age of Sigmar has embraced Khornedogs, Gryph-Hounds, and Aetherwings for the Bloodbound and Stormcast factions. Where they’ve really outdone themselves is, as is so often the case, in Necromunda, where every gang has had an associated pet to accompany their gang leaders.

While more grimdark Pound Puppies are on their way, we thought we’d showcase the best of the Goonhammer crew’s paintjobs and conversions and let them explain in their own words how they raised and groomed the pet models that grace their tabletops.

Ol’ Sumpy (isn’t she the sweetest?) burrowed her way through my heart and into my chest cavity the moment I saw her. With a scaly hide, too many eyes, and winning smile, I couldn’t say no. The model has plenty of room to flex your naturalistic animal painting muscle, while still giving you some space to tie her in with the rest of your gang. When it came time to paint her, I decided it would be an exercise in blending, washing, and drybrushing. After a quick googling of some real life crocodiles, I got to work. All paints are GW unless otherwise noted.

Rippy the Ripper, by Primaris Kevin

I was tired of cleaning up after myself, so I decided to adopt this little fella in the hopes that maybe the floor would be a little less messy. The good news is that it worked great; my floors are bare. The bad news is that he’s also eaten the leather couch, three of the neighborhood cats, and both of my legs.

You may have noticed that Rippy is a bit of an oddity, a Ripper of Unusual Size if you will. I made him by using some pieces that most Tyranid players end up with a lot of; a Trygon skull cap, toxin sacs, extra claws, and a Genestealer head. You can see how it all comes together in the image below. More adventurous modelers who worry about people looking “under the shell” so to speak are welcome to shove Green Stuff into the gaps and make it look suitably organic. Personally I just tell people that Rippy would appreciate it if they didn’t violate his personal space.

My painting style uses drybrushing, glazing, and washes to get a look that incorporates a lot of depth without much effort. This method works best if you paint the base and model separately. Start off by priming the whole model in Wraithbone.

The model receives a wash of Army Painter Soft Tone followed by a drybrush of Vallejo Game Air Bonewhite and a second drybrush of Vallejo Model Color Gloss White. This is the same method I use for the bone color in my Primaris Marines and will serve as the foundation for the colors on top. Using the thinned air paint creates an interesting glaze effect which both highlights the edges and tints the entire model.

The blue is simply two coats of a 50/50 mix of Contrast Talassar Blue and Contrast Medium. I highly recommend mixing up your own bottle and setting it aside. Using thinned Contrast allows for a lot more variation in color and depth, and gives you more control than you would if you slapped down One Thick Coat. This is a good example of the flexibility offered by Contrast paints and is one of the reasons I’m a fan.

The pink is Liquitex INK! Magenta painted over the tongue. You may find yourself having to re-do the base after the blue gets everywhere; for the tongue don’t worry about applying more drybrushing or anything. I just cover the mistakes with Bonewhite and move on. For a little extra depth you can apply a wash of AP Purple Tone, but it’s not necessary in this case.

The shell is a single layer of Liquitex INK! Yellow Orange Azo over the bone color. Be careful about pooling in the recesses as it will turn orange if there’s too much. I think use Liquitex INK! Carbon Black to form the spots. This stuff is very thin but intensely pigmented. Start by creating several dots, and then randomly connect them to make the poison arrow frog pattern.

The claws are painted using VMC  Dark Gray with a little bit of VMC Gloss White.

The base starts off with two coats of unthinned Contrast Snakebite Leather. I then wash it with AP Strong Tone and then drybrush it with VMC Hull Red. The rock is actually a piece of oyster shell; they have a ton of detail that looks great when painted. I started with a layer of unthinned Contrast Baslicanum Grey and drybrushed with VMC Gloss White. The plants are a combination of Games Workshop plants and a leaves from a plastic aquarium toy; they’re simply a layer of Contrast Warp Lighting with the stem painted in a subsequent layer of Contrast Ork Flesh. The base is rimmed with a 50/50 mixture of VMC Black and Liquitex INK! Carbon Black, which produces a very smooth and pigmented blend that covers extremely well.

Continuing my theme of “animals more jacked than their owners” is the incredibly muscular Grawl of the Godsworn Hunt for Warhammer Underpants/Underworlds. He’s swole out of control, and the only thing he likes more than treats is the bones of his enemies crunched between his teeth. This extremely good and extremely blind boy unfortunately is pretty much just there to be sacrificed for some Glory in your average Underworlds game, but with some love and care he too can find his way into your warband and your heart. I based his paintscheme on a Rottweiler, as I felt it hit the right balance between “vicious attack dog” and “misunderstood sweetie”.

This poor cat was left abandoned when the nice old lady who owned her became destined for some kind of horrible giger-esqe kitbash. She was found wandering in the desert, so I gave her the forever-home she deserved.

Face:
Black around eyes and for pupils

The fur was done in a few layers. First a layer of Ushabti bone mixed with a little yellow and brown made a nice tawny color for the fur base. Next stripes were put down with some thin German Camo Black Brown. For the final steps small slashes of brown were put horizontally along the stripes, then a mix of the base color was put along the space between.

When I purchased the classic Empire General kit (RIP), I had no idea I was welcoming this little fellow into my home. While Griffin was supposed to be a bit of base decor, I instead gave him his own 20mm square base to roam around in. Any pet owner will know that Gryph-Hounds prefer the space to roam about. When it came time to paint this little fella, I was extremely excited to try Contrast paints out. With a mix of Contrast paints and traditional edge highlights, I hashed out a good looking model in under an hour of actual painting.

Porter the Keg Monkey, by SRM

When I first met Porter, he was carrying powder for a regiment of Empire Handgunners. Knowing that gunpowder and monkeys are a disaster waiting to happen, I sent him off to the Talabheim Tappers, a local Free Company Militia regiment where he could be safe and oh god he’s GOT A KNIFE

Pet love extends beyond the bounds of Games Workshop. Knight Models get in on the action in a whole bunch of ways, from Harley’s hyenas to the giant goddamn demon that Damien Wayne drags around. But none more majestic then the owls that the Court of Owls deploy.

This is angry owl. It is furious. The reasons are unknown, but probably because no one is petting it. Here are the steps I used:

You can use this technique on owls from Games Workshop too. I switched the basecoats out for Zandri Dust but otherwise it’s the same process.

Isn’t he a beautiful bird. Who is? Don’t call me a twit, I was just being nice.

Macula is intended to be Orlock Road Boss Slate Mardena’s vicious and yet loyal companion, but after painting him, I like to think he’s my vicious yet loyal companion now, too! While his posture, expression, and brutal cybernetics may make him appear violent and dangerous, I think we all know all he really wants is a snuggle!

Our readers might be surprised to learn that not all painting is done on models! I painted this picture of my beloved yet troublesome cat, Mini, at a “drink wine and paint stuff” event hosted by my employer in what I think was the Spring of 2012. This picture was taken in the Summer of 2011, when Mini was still a wee kitten.

I do not remember the exact colors or ratios I used to render my sweet daughter on canvas. Looks like there was some grey, purple, yellow, red, and white. Feel free to attempt to paint my lovely companion animal yourself, and share with us the result.

I am better at painting models than I am at portraiture, this is clear.

This bonded pair of Squigs found their way into my home when I got a box of Zarbaj’s Jitz with my Adepticon swag bag last year. The two have been inseparable since I adopted them, only leaving each other’s side to maul whatever poor fool decided to get too close to their territory. My paintscheme for Zarbaj and his Jitz involves a lot of purple and yellow, so I forewent the typical reds and oranges you see Squigs come in, and went instead for a pinkish purple. I think it’s pretty fashionable.

The Good Doggo, by Alfredo

First seen as part of the Kill Team: Rogue Trader set, this good boy was quickly recognized as the most important model in the entire set (even inspiring a very important Regimental Standard) and justified the three figure price tag all on his own. For my own take on this handsome pupper, I figured he might end up alongside my Necromunda Enforcers down the line and wanted to do something that wasn’t a doberman/rottweiler scheme. So I decided to go with a Great Dane fawn coloring and a nice saturated blue for the harness (I hope Ruffwear still exists in the 41st Millennium) to contrast with the brown-orange tones of the coat.