Humankind: Kinda Gets There 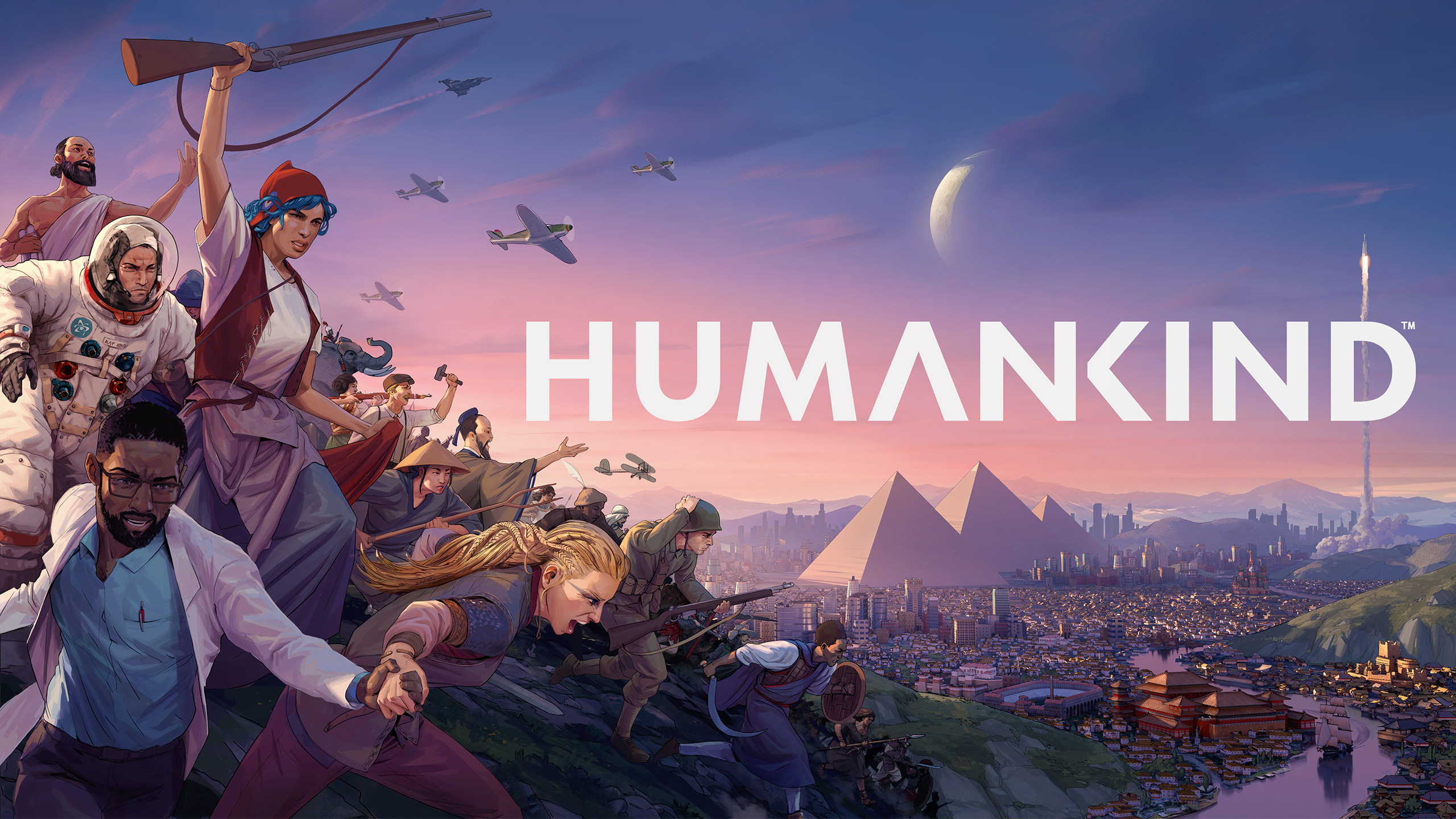 Humankind is probably the best love letter to what people think Civilization used to be yet, and that’s for good and for ill.

I’m more of a fan of Civilization II than I am of Civilization IV, mainly due to the ages at which I played both, but the latter is generally recognized as the high point of the franchise before the high tide began to roll back — at least, among the people who were greatly turned off by the changes that Civilization V made to the formula. Humankind rolls a number of those changes back while integrating the positively-received innovations in the later Civilization games, while throwing in a dash of spice from the Endless Legend title that Amplitude Studios was previously best known for as a 4X developer (they did the Endless Space series of games too, which is somewhat less mechanically relevant here).

Humankind has a familiar premise: you have to take your nascent, ‘real-world’ civilization from the beginnings of human history to the hazy futures we imagine for ourselves, targeting any number of win conditions along the way. You will progress through a number of eras until you reach the modern day, at which point the game will reach its ending, and every remaining civilization will be graded against the win conditions to determine who has won. In a nod to our developing awareness of the shitstorm we’ve put ourselves in as a species, there is also a Pollution ending, whereupon you render the world unfit for human life and all lose (though the game still names a Pyrrhic victor based on points; the Fame score always determines the winner, while the win, or here, lose condition simply determines when the game ends). Civilization players will recognize these: science, diplomatic, and cultural victories are all still hanging around in slightly renamed and regraded forms. In fact, it’s difficult to name features of this game that Civilization players won’t recognize. 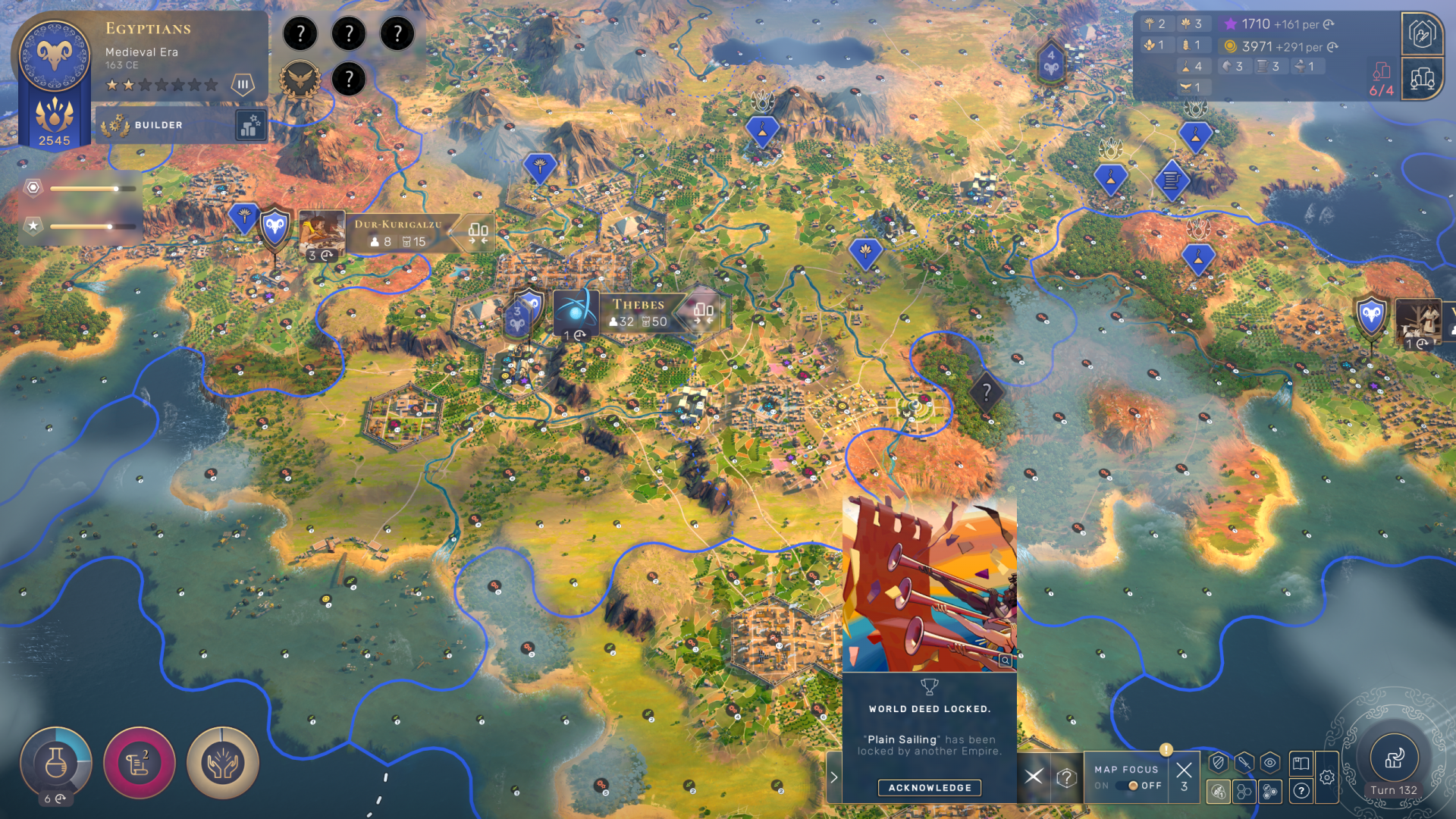 The biggest changes to the standard Firaxis-based formula are threefold: a change to how civics/ideology work, a change to how city development works, and an attempt to square the circle on the most controversial change to the Civilization base package: the ability to stack units on tiles. We’ll begin with the last of these first. Amplitude has imported the combat mechanics from their Endless games to a degree to create a one unit per tile system that still has…multiple units. That is to say, each stack you form has a certain number of slots in it, and you can put armies into these slots to create larger and more potent armies. Then, when combat begins, like in Endless Legend an ersatz battle arena forms on the strategic map to create a tactical layer for the two conflicting armies to tee off on each other. Generally speaking, this is an excellent compromise, allowing player skill and intelligent composition to beat raw numbers while still allowing macro strategies based around raw numbers without also cluttering up the board or making 45-army doomstacks the expected meta.

Ideological choices that define your civilization (which you can change every era if you wish, leading to odd outcomes like Edgar Allan Poe, an American culture hero, commanding the Turks in the Contemporary Era — if you’re chasing a science victory, you’ll love the Turks’ Public School district enhancement) are distilled into ‘civics,’ a set of policy decisions that will move you along a series of sliders that signify things like freedom of speech, political repression, and so on. Every step on those sliders, including hanging out in the middle, will have some kind of bonus it provides to your civilization. This is in addition to the direct, policy-specific bonuses you get from the choices themselves. You can make some truly incoherent societies this way…but suffice it to say there’s no lack of realism to be found there. You can go for an overarching build or, more likely for beginning players, simply take the civics as they come — you might not get precise synergies in the same way you would with an extremist society coupled with a favorable religion and a well-chosen civilization, but there are no options that simply do nothing beneficial for you. 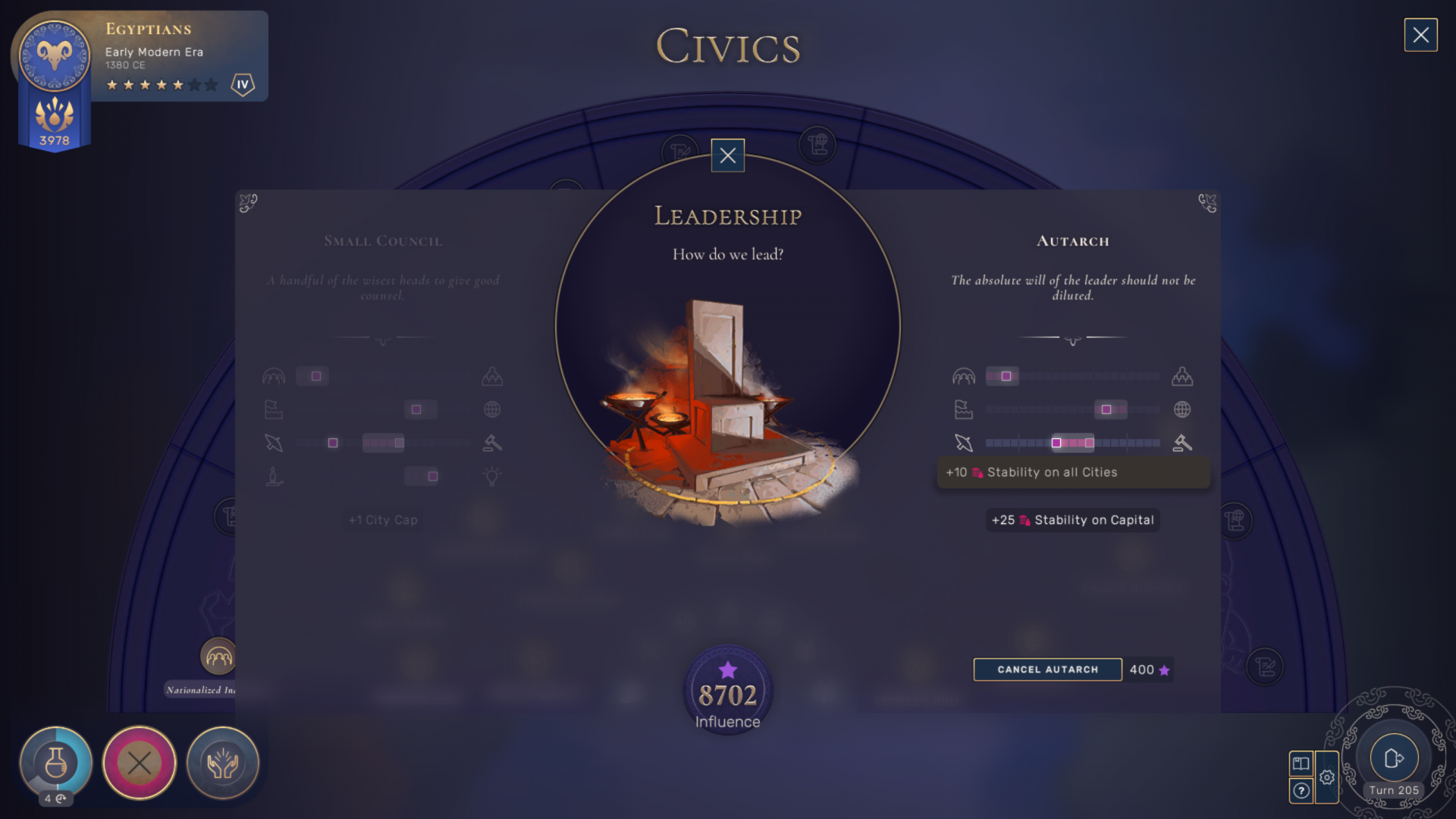 You can see the two benefits this civic provides at the bottom of the sliders, and the benefit of the slider position its influenced on the tool-tip.

Cities, outposts, and territory formulation are the heaviest influence that post-Civilization IV titles in that franchise exert on Humankind. Here they’ve also squared the circle nicely — in this specific system — between the pressures to build tall and build wide, by introducing the existence of a proto-city settlement called an outpost. You found an outpost in unclaimed territory and then you decide whether you want it to become its own city…or if you want to attach it to an already-existing city you have, expanding your territory and greatly increasing that first city’s prestige and reach. Unsurprisingly, this takes a lot of Influence, the primary spender resource in Humankind which is very similar to the cultural resource over in the Civilization games, even down to its name and being color-coded purple. There are merits and demerits to either approach — the primary thing to be concerned about with city development in Humankind is Stability, which decreases the more you expand to a precipitous degree if you haven’t invested in upgrades to keep it pumped up to the stratosphere. Honestly, excepting weird broken build choices they didn’t properly examine in playtesting and a more general critique coming up below, Stability being too kind to the player except (presumably) on difficulties well up the chain is the biggest balance problem with Humankind at launch. But if you love big cities, you’ll love how launch balancing works for you.

Speaking of cities, the most recent titles in the Civ franchise have fallen in love with the neutral city-state that can never expand but which holds territory to block actual player expansion and act as a nuisance, foil, or erstwhile partner through the middle third of the game. Humankind actually introduces them a bit earlier than Civilization (than the fifth game did at least), and has them as a major player from around the time you yourself can begin to develop cities — but they’re much easier to integrate culturally into your civilization this time around. In fact, they’re pretty much designed to be a boatrace to see which actual player faction can influence them most quickly in order to bring them and their territory into the fold. The idea here is to force great power conflicts and curtail Golden Horde-esque “sweep the plains” aggression, and it works well. Perhaps too well. 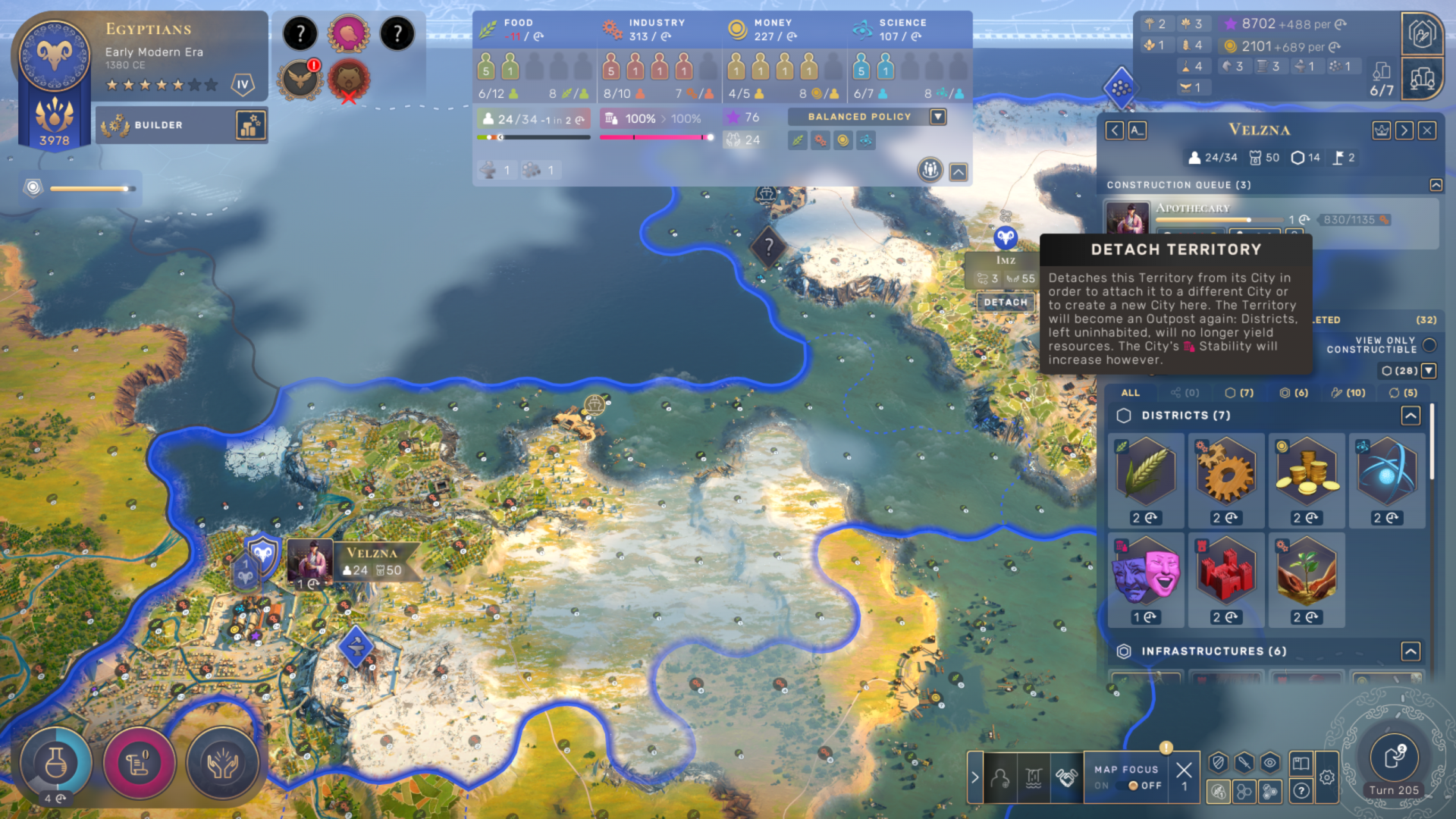 A city with an outpost attached, and the soft border between the two.

If Humankind has a failing, it is that it is a game that thinks it knows what its audience wants to play — the great power Civilization IV run where you mark out territory, spar with other empires a bit diplomatically, but generally leave each other alone after getting a bunch of big cities and then race each other to the endgame to build tall in those cities and win via score or researching everything in the tech tree, with few massive world war-style armed conflicts. If you want to play it in a way other than that, you’re going to run into problems. For instance, razing your enemies’ cities to the ground is a long and involved process that starts with stripping the resources around a city, spending turns wearing the countryside down, and only then getting the option to get rid of the city specifically. For wars between player civilizations, generally speaking you’ll only be able to take one city from a defeated foe when the warscore demands they sue for peace (another modern 4X adaptation, though more from the Paradox Studio family of games than Firaxis’s offerings), leaving both sides to lick their wounds and both players fundamentally still in the game.

From a certain perspective — a multiplayer board game perspective — this makes sense: if you’re playing a multiplayer game of Humankind where every player is a person, you don’t want players to go out of the game too easily. You want everyone to stay engaged and present as long as they can, even if they’re eventually relegated to a spoiler role. Against AI players, however, it sure does make them tough weeds to pluck, and no one’s feelings would be getting hurt if you steamrolled them. Perhaps some kind of setting to account for this would be appropriate. Perhaps this is in fact working as designed, as Humankind is an experience that is knowingly, intentionally, and laser-pointer focused on catering to 4X fans of the Civilization franchise that want an alternative to the direction that series has gone in recent years. In that case, there’s no fix to be had; it’s working as designed. Still, there are a lot of more minor gameplay oddities — like the nomad bumrush strategy — that could use a defter touch in patch revisions. 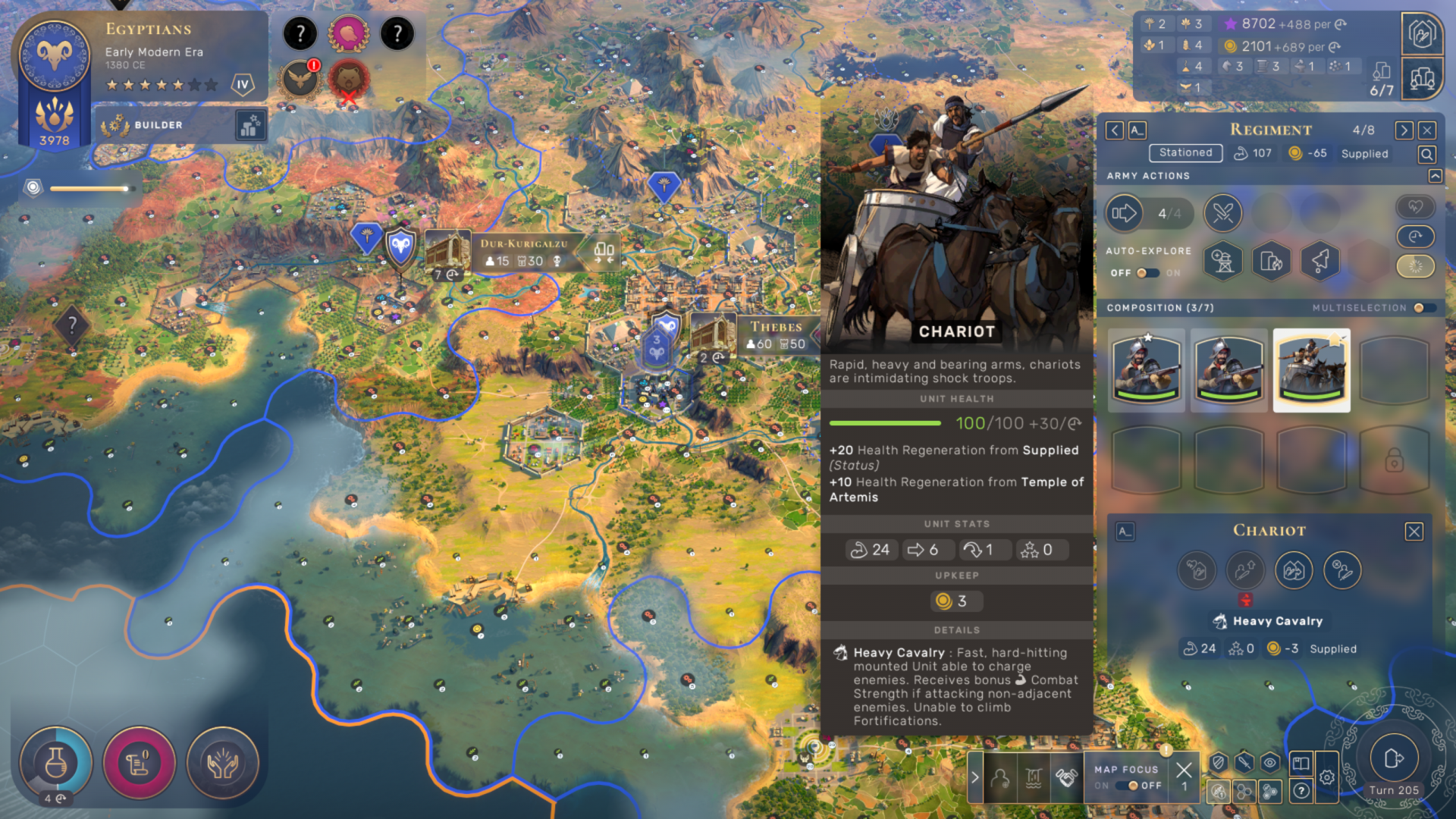 A look at the “one tile stack” system, and the level of detail the tool-tips provide. A plus!

One thing that absolutely isn’t to taste, or at least isn’t to my taste, is the narrator. Nothing against the guy they’ve got voicing the thing; he’s working his heart out. But the franchise that Humankind is aping got Leonard Nimoy and Sean Bean to narrate their work; even the fifth entry, relatively lackluster on starpower, got veteran sci-fi actor and voice actor William Morgan Sheppard to lend his talents. This isn’t a shot at the Humankind narrator, whose credit I can’t actually seem to run down easily (the game’s IMDB only has two credits, for ‘Emperor’ and ‘Imperator’). Nimoy, Sheppard, and Bean came in and did their work with appropriate gravity — all I need to do is type ‘Nimoy’s spear line’ and anyone who played Civilization IV for enough hours can hear Nimoy reading the quote from Homer attached to the Bronze Working technology: “It is entirely seemly for a young man killed in battle to lie mangled by the bronze spear. In his death all things appear fair.” The Humankind narrator on the other hand has…jokes. Snark. Quips. That’s not what I want out of a game like this. I want an appropriate reverence for the subject matter of ‘all of human history,’ even if it has been distilled down into a virtual board game. This is the only aesthetic misfire the game makes — it’s otherwise gorgeous, with great UI — but it’s glaring, painful, and ever-present.

If you’re the target demographic — a Civilization fan who wants a 4X that nods a lot more to how that series used to be than some of the mechanics of its present — you’ve probably already bought this game, to be honest. But it is definitely worth the $60 for you. Beyond that…it’s a bit muddled. I might wait for some balance and gameplay patch revisions, but that stuff can be pretty hard to judge post-launch without getting deep into the weeds. It seems like a title that definitely plays better with other people than solo against the AI, and if you prefer being left alone to futz around in your 4X rather than aggressive conquering expansion, then this is probably a title for you. I really just cannot get over that narrator though. The game does so many things right — I just wish he specifically wasn’t the one always telling me about them.

Have any questions or comments? Drop us a note in the comments below or email us at contact@goonhammer.com.