I Have No Brain and I Must ‘Ham: 40k for Dummies

I have a confession to make:

I am not very good at this, or any other game. I have a whole podcast about it.

Right now Warhammer 40k is the closest it’s ever been to being a living game, with frequent FAQs, campaign supplements, Armies of Renown, codices (sometimes multiple per army per edition), codex supplements, annual Chapters Approved, and all that on top of an already complex and comprehensive ruleset. It is, to put it lightly, A Lot. Today I’m going to propose some solutions I’ve come across to make this massive, unwieldy game just a little more playable for your below-average ‘ham. I’m not going to get into the weeds about competitive shit – there’s smarter folks than me who write that sorta thing right here on this very website.

There are so many moving parts to keep track of in 40k, and a bevvy of those only apply at certain times. While having the smallform rules on hand is helpful, writing up a solid sheet to keep track of the rules for your army and the scenario will lighten that mental load. Break it down for each phase of the game, and write out any of your army’s always-on rules, relics, warlord traits, psychic powers, and so on. Even sticking this stuff at the bottom of your army list is going to work. So for instance, you’d have something like this:

Look at all that! And that’s just for Ultramarines, the dang poster boys of this game. You could also consider adding page numbers to any of these notes when applicable, which would be especially helpful when playing against new players or in a tournament when you might need to explain some rules in more detail. You could even leave the secondary/objectives area blank and fill that in by hand when your game starts if you don’t know what you’ll be up against.

FAQs, errata, Chapter Approved points changes and the like can all fundamentally change the nature of your army, and chances are you will forget one minor change or the other. For this reason, print those things out and stick ’em in your codex. I’ve seen some people even use tiny sticky notes over the relevant pieces of their codex, or write in them like it’s their high school civics textbook. Whatever works for you, you should have some system in place to keep track of this stuff since it changes so frequently.

This may be redundant to some folks who use Buttscribe, but having a readymade roster of your armies is a great way to keep them organized and remember what you’ve got. Hell, it can even be useful for keeping track of your hobby progress!

With all this stuff already written out, their upgrades paid for, and their points costs calculated, it’s easy to build armies by just copypasting unit entries into a new spreadsheet. With the wargear already written out, you’ve got a readymade reference for what your units have. It’s easy to forget that third Stormbolter on your Repulsor or that one special pistol you gave some unit sergeant somewhere, especially if you’re not going full WYSIWYG.

While GW sells Warscroll cards for AoS, fighter cards for Necromunda, and probably something similar for that robot game nobody plays (Ed: DO NOT LET THE WARLORD WEDNESDAYS BOYS READ THIS), they don’t really have anything like it for 40k. It’s a shame as having that information readily available without having to page through a codex or app is enormously helpful.

You could easily photocopy these, print them off from your digital copy of a codex, or just transcribe the important info onto a document or spreadsheet, much like your army list or cheatsheet. Now, not to get too randy here, but I gotta plug Buttscribe again, as it does all this for you. For luddites like me though, making your own is viable.

I’d say the worst part of modern 40k is the time spent paging through your book(s) looking for that perfect stratagem, hoping your opponent will play into your trap card. This most often involves stopping your opponent mid-phase, saying “I have something for this!” then paging through a book or two only to find that no, you really don’t have anything for this. Fortunately, GW actually does sell decks of Datacards, so you can have some handy reference material. Before the game, just pick out the ones your army might need, and put the rest back in the box. Sorry, Vengeance for Calth, you’re staying in the box where you belong. In my perfect world, 40k would have a stratagem deck-building element where you’d pick 10 cards before the game, but this’ll do if your local group doesn’t want to take that approach.

Now, if you don’t want to spend 25bux on cards, you can transcribe the ones you want and write them out, print em off, and have them all take up a single sheet, but it’s a solid quality of life purchase.

Use Cards and Tokens to Mark Units

Whether you buy the cards or print them, they’re useful for more than just rules reference – drop them on the table next to a unit while they’re in effect, so you know what’s active when. Cast a psychic power or drop a Litany on a unit? Place the card for the power on the table next to the unit until it wears off, making it easy to see what’s active on the unit while also taking it out of your “hand” so you know it has been cast. Have an ability that can affect units or objective markers? Bring tokens along that you can use to mark those units. This will help both remind you what’s active and also make it easier to see what’s going on just by looking at the table. Making tokens can also be a fun modeling project in and of itself, and a thematic way to visually tie in those abilities with your army. You can definitely do just fine with some painted bases, 3D prints, or acrylic tokens though.

Now all this could come to a comedy of errors when you Mr. Magoo your way into the game store and take up two entire tables with all your reference materials. If you’re still playing on a 6×4 surface, the smaller board sizes of modern 40k should give you enough room to spread out a bit. However, once you’re at the table, this all should prove to make your play experience faster, less confusing, and more enjoyable for you and your opponent. Reading up on your rules and stratagem cards in the less interactive phases of the game, such as your opponent’s movement phase, should keep the information fresh and help you learn what all these wackadoo rules actually do. 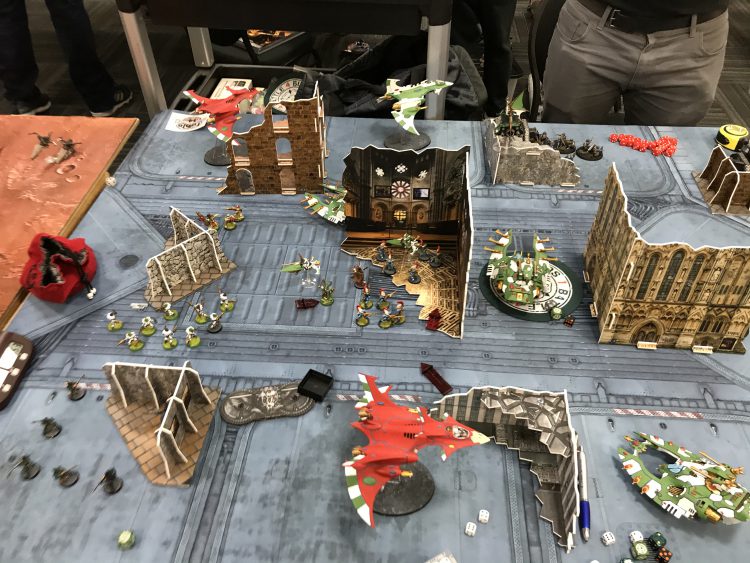 Now get out there, get vaccinated, and play some damn games!

Have any questions or feedback? Drop us a note in the comments below, or email us at contact@goonhammer.com.