I have, and continue to, enjoy my time at Goonhammer.com despite colossal feelings of inadequacy doing a job I have never done before. This tale continues that trend as I am asked to judge an event.

I’ve won an event (one day), best painted (nearly by default), and best sport (maybe renamed wooden spoon). One of the last remaining tasks in this hobby for me to stumble my way through is being a judge for an event. So when my partner in the GAW Holiday Doubles event had to drop out I was happy to do my best James O’Brien impression and attempt to Judge/TO the event and serve as ringer.

What was the Event?

The GAW Holiday Double event was a team event where each team member brought 1000 points. Allies weren’t allowed in list building. Players shared a pool of command points, book tactics and grand strategies could be selected, and each teammate had a general with a command trait. Only one heroic action could be used per turn so you have to share. Late in the process it was ruled that the new Slaves to Darkness book was legal. It proved to be a popular choice.

In addition, there were a few modifications to the missions to provide a holiday theme with presents and different terrain features. Looking at the pack the overall feeling was very narrative despite using matched-play rules. As a player I had not read the pack. As a TO I had read the pack, printed it out, and forgot it on my printer prior to leaving. 32 players representing 16 teams uploaded lists and team names. While in my **OFFICIAL CAPACITY AS JUDGE** I couldn’t share my feelings on the pairings or names I will now. What is your favorite name?

A Song of Ice and Water – Fyreslayers and Fish People 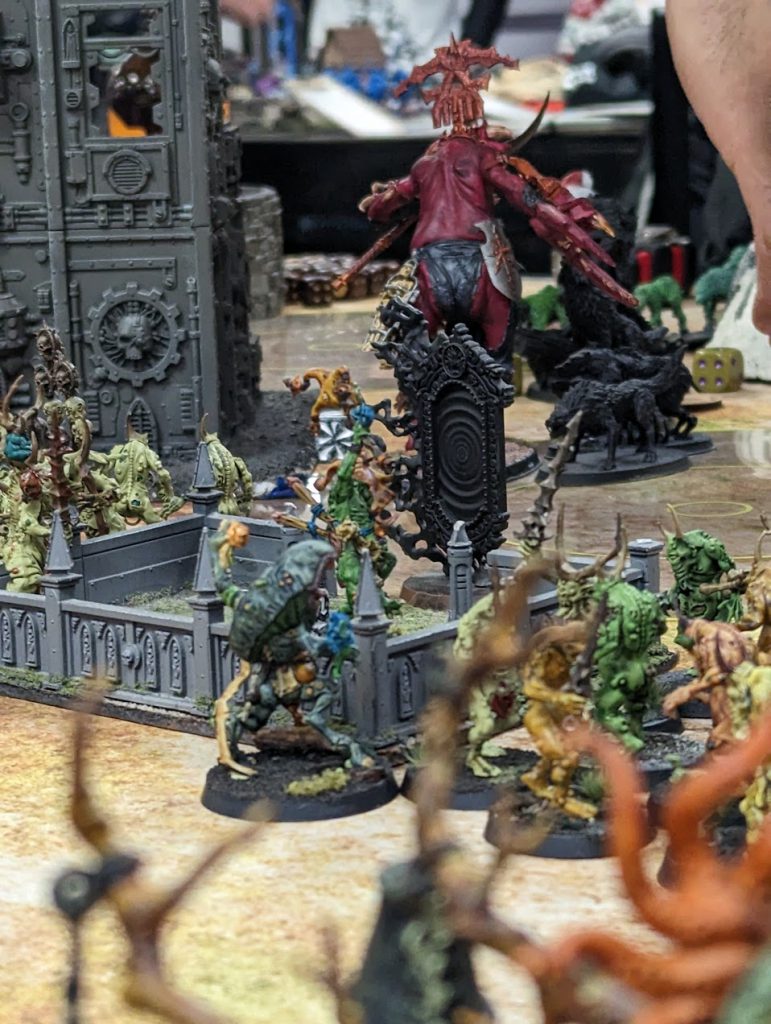 Da Lucky BoneRattlaz -Ogors and Bloodtoofs – That’s the destruction flavor I like. 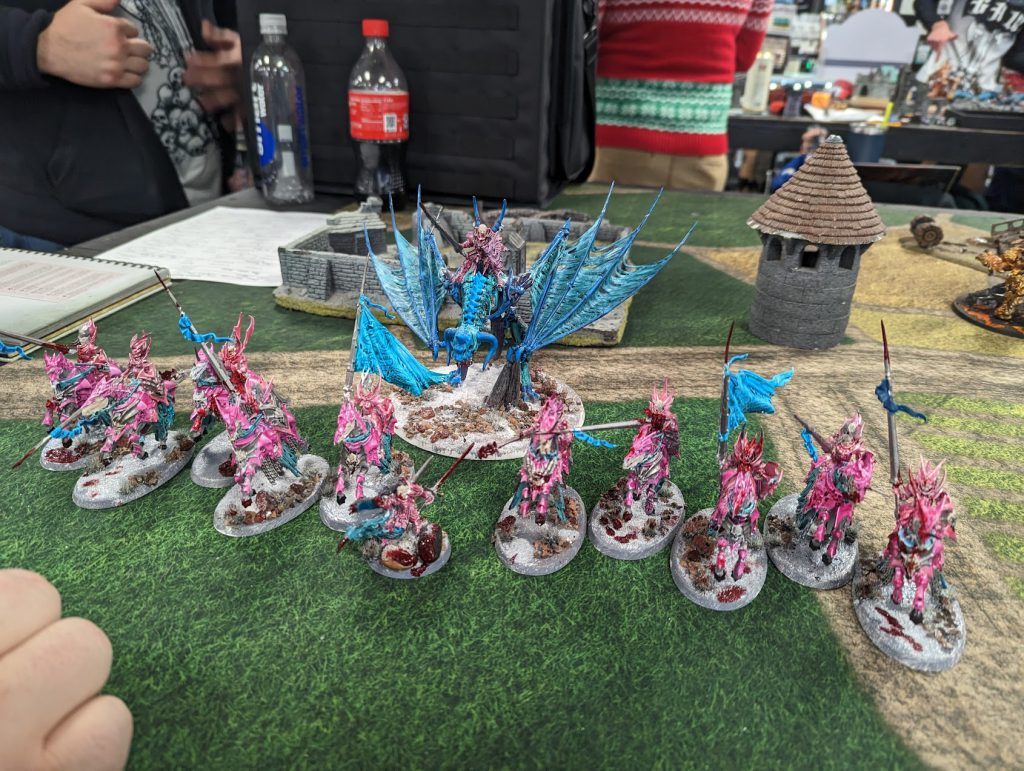 No Shoes, No Shirts, Full Service – Sons and Fyreslayers – winner of the event with a very nice set of models. 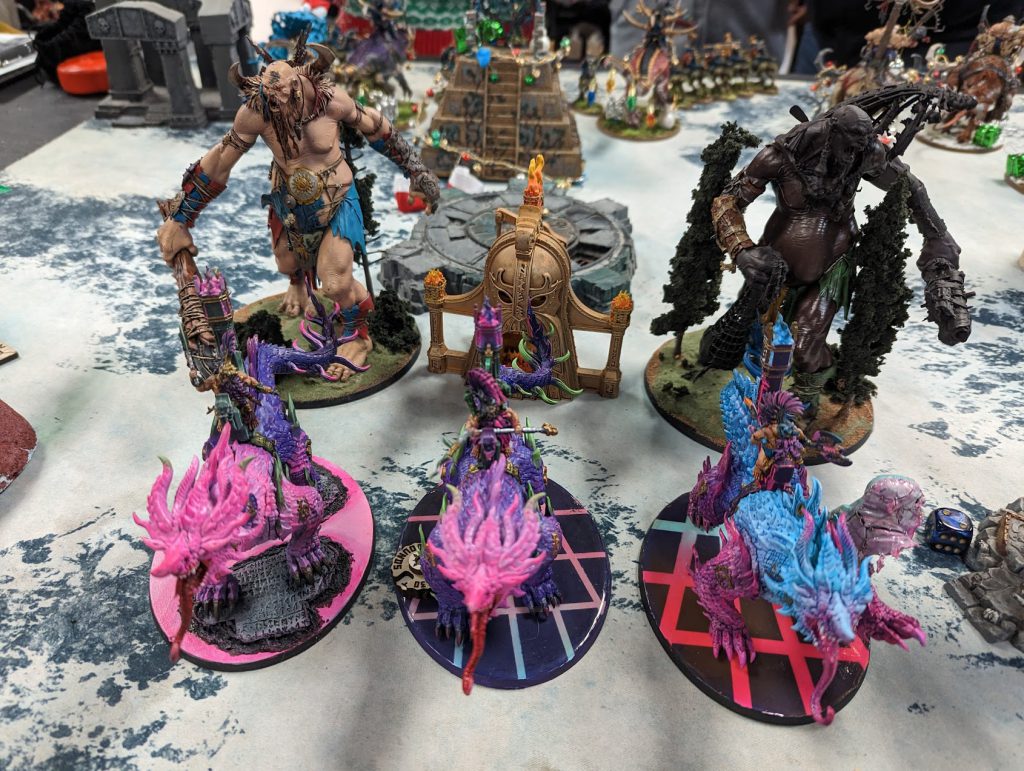 Raining Cats and Dogs – Beast of Chaos and Soulblight

Santa’s Hangry Helpers – Ogors and Seraphon – I hate to admit that this is a good name. 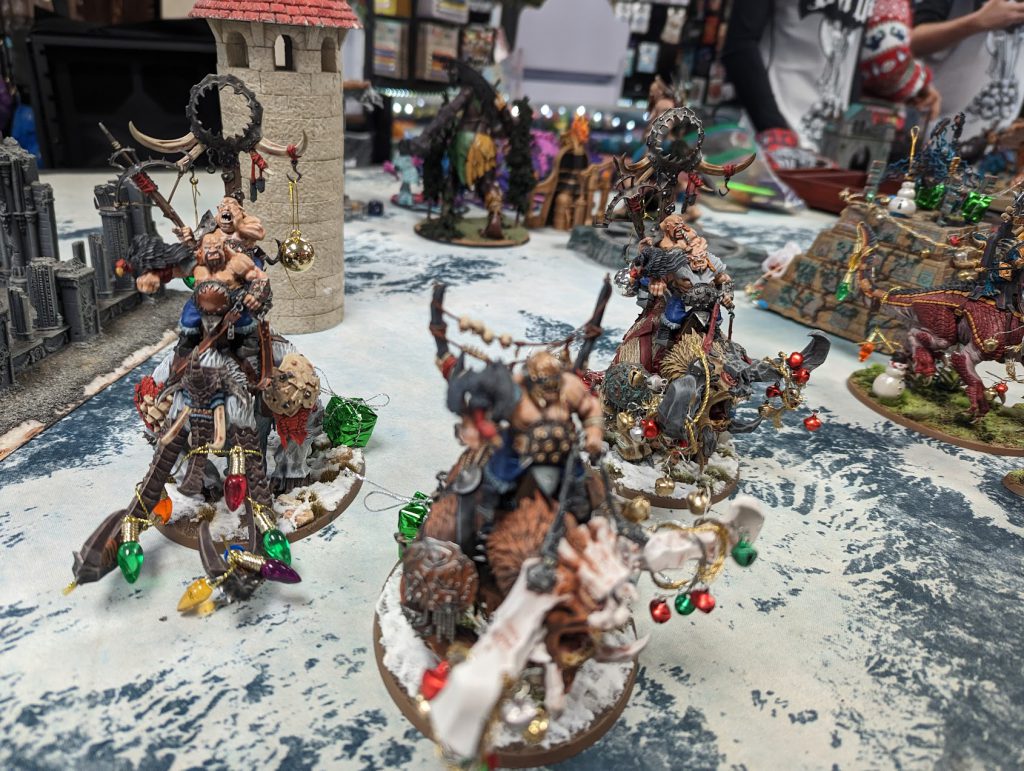 Violent Night – Nighthaunt and Deepking – I really like this name, very thematic and holiday appropriate.

What Does a Judge Do?

I’m not really sure. At the beginning of the event the head TO had everyone raise their hand and say “Judge” during the team meeting. It was clear that if there was an rules interaction that didn’t make sense or a question the players had the capacity to ask a question. Overall there were a few rules questions but mostly players seemed to resolve issues themselves. Part of me wants to say this is because of the great people you’ll find playing Age of Sigmar in Georgia and at a GAW event. However, a lot of players in the AoS community seem to be able to resolve issues as we’re pretty late into a GHB.

Round one went off without any issues that I can remember. Players seemed to be dedicated to the principals of fair play, sportsmanship, and other boring ideals that lead to good communities but don’t let judges make themselves stars of the show. Our players ranged from experienced event players to a team who had always played contest of generals so was using battle tactics for the first time.

After the first round concluded we had to judge the painting competition. Our rules were that the entire army had to be painted and we selected two winners to be announced at the end of the event. One winner was a beautifully painted Khorne army that had a large amount of details and highlights that brought out some great details on everything from troops to centerpiece models. The other winner had a wonderfully converted Morathi as part of a Daughters of Khaine army.  However, there were several other stand-out armies that were considered during the judging process.

About 40 minutes into the first round I returned from the bathroom to see two teams gesturing, pointing, and talking to the two other judges away from the table. This is it, this is the time to search deep into the rulebook or pull out the red card. My kingdom for a whistle…..

Sadly, instead of a major judging decision requiring the wisdom of Solomon the two teams were recounting how two megas and three magmadroths got off 3 10-inch charges on turn 1. That tends to end the game pretty early without the need of a judges ruling and gives both teams time to run some errands before the third round.

I received a pretty odd question from an ogor player asking if he had to attack in Melee. An Ogor not wanting to fight set off alarm bells and I found out it was related to a battle tactic. Thanks to doing my homework and reading goonhammer.com I asked if he needed to be in combat at the end of the round or just at the start of the combat phase. Please with answer being the latter I assume he rolled dice and bashed heads. 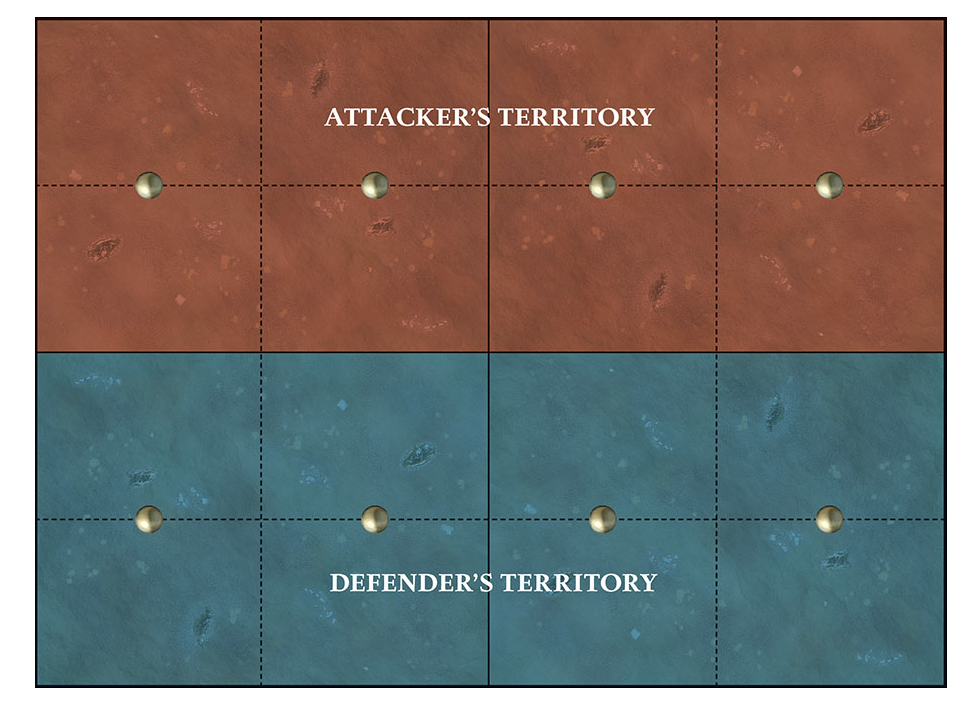 I picked a Loonboss on Giant Cave Squig, a Fungoid Shaman with Hand of Gork, Mork’s Mighty Mushroom, a Mangler Squig, Sneaky Snufflers, and a few units of Squig Herd.

When one of the players who travelled three hours for the event had his partner drop GAW was prepared with a player to step in. We had anticipated having an odd number of teams so all of us had brought underpowered lists. Replacing a single individual made me look at my list and say “man, I could have brought a slightly better list”. My partner and I had played at Southern Fried Gaming Expo, a humbling event where I one a single game against a Slaves to Darkness player. Let this be the hour where we draw swords together. Our opponents had a slaves to darkness list and two megas. One of the villains we were up against had charged Kragnos into my harmless laser eye wurrgog prophet at Nashcon. A proper grudge match and an assist all in one match.

After a brief strategy session my partner told me that he would 100% do some damage to the megas. I offered to either throw forward my units to slow them down or screen out more. Our goal was to hold our points, strike back hard, and try to drop two megas. Our high drop number allowed us to counter deploy against a group of Chaos Nights with a group of chosen and I made sure a Mega couldn’t get near the Loonshrine turn 1.

In the first turn our opponents went first and, surprise surprise, charged in with both megas and the Chaos Knights. I had very little to do except say “I have no save” and let my partner take the lead on spending command points. He had some great save rolls and was able to damage the Chaos Knights that charged on the right side of the board. By selecting our central left objective as the proving grounds we were able to hold onto two objectives going into our round.  Then the greatest thing in the history of sigmar occured when a squig herder damaged a mega gargant. When people speak of acts of heroism and lunacy this is the kind of thing they talk about. In addition to doing a single point of damage he managed to intimidate the mega into an extremely poor roll allowing him to survive. Size matters not indeed. However our opponents put up 5 points by holding more objectives.

On our first turn we rallied a squig herd unit and used a cheeky teleport to move them to the back far right point. In a key error I didn’t bring back a leader in the unit as I didn’t anticipate it would matter. I also cast Mork’s Mighty Mushroom and got ready to roll some dice in the shooting phase.

My partner and I worked well to make sure we didn’t move block any of our models as we positioned his army to charge. I retreated my squig herd and he charged in with Karkadrak and his Chaos Knights. I got to roll some dice and kill some things with a funny mushroom. Then we went into the charge/combat phase.

If you haven’t played the new Slaves to Darkness it is pathway to many abilities that some consider to be unnatural. My partner explained how he was going to fight with four units and our opponents rightly called “Judge”. I realized that we would get a fight first, a fight immediately, and then move to the regular fight where we could select a unit to fight. Due to some rule that unit could fight with its retenue giving us four combats before anything else could fight. Our combats went well and we ended the turn with 4 points and two damaged megas and eliminated the unit of Chaos Knights.  We as in my partner as I was not participating in any combats.

Hoping to win priority we rolled off for turn two and unfortunately lost the priority. Fortunately for us we had two megas in combats that we liked and there wasn’t anything that could get into combat in our zone. Unfortunately for my squig herd they were charged and killed through battleshock losses. Without any major changes in positioning we got through combat and left a mega with a single wound going into our turn. Our opponents scored another five points brining the score to 10-4

This turn we used an arcane bolt to kill the mega with a single wound and I committed my last squig herd, cave squig, and mangler into the other mega. Unfortunately time was called but we rolled off to make sure we had killed the other big guy. My partner and I both felt that we would have been able to even the score in the next three rounds but we conceded.

I had never been asked to judge an event and can’t lie that I was slightly disappointed when my original partner had to drop. I’m really glad that I had the experience and I think that everyone had a pretty good time. Despite some of the teams bringing absolute filth the event had a much more narrative feel contributing to few rules questions and interactions than I expected.

If I could change anything it would have been making more frequent round timing announcements. I think that games took longer to finish compared to a singles event as there were MORE interactions to talk through and most people wanted to get consent before taking an action.