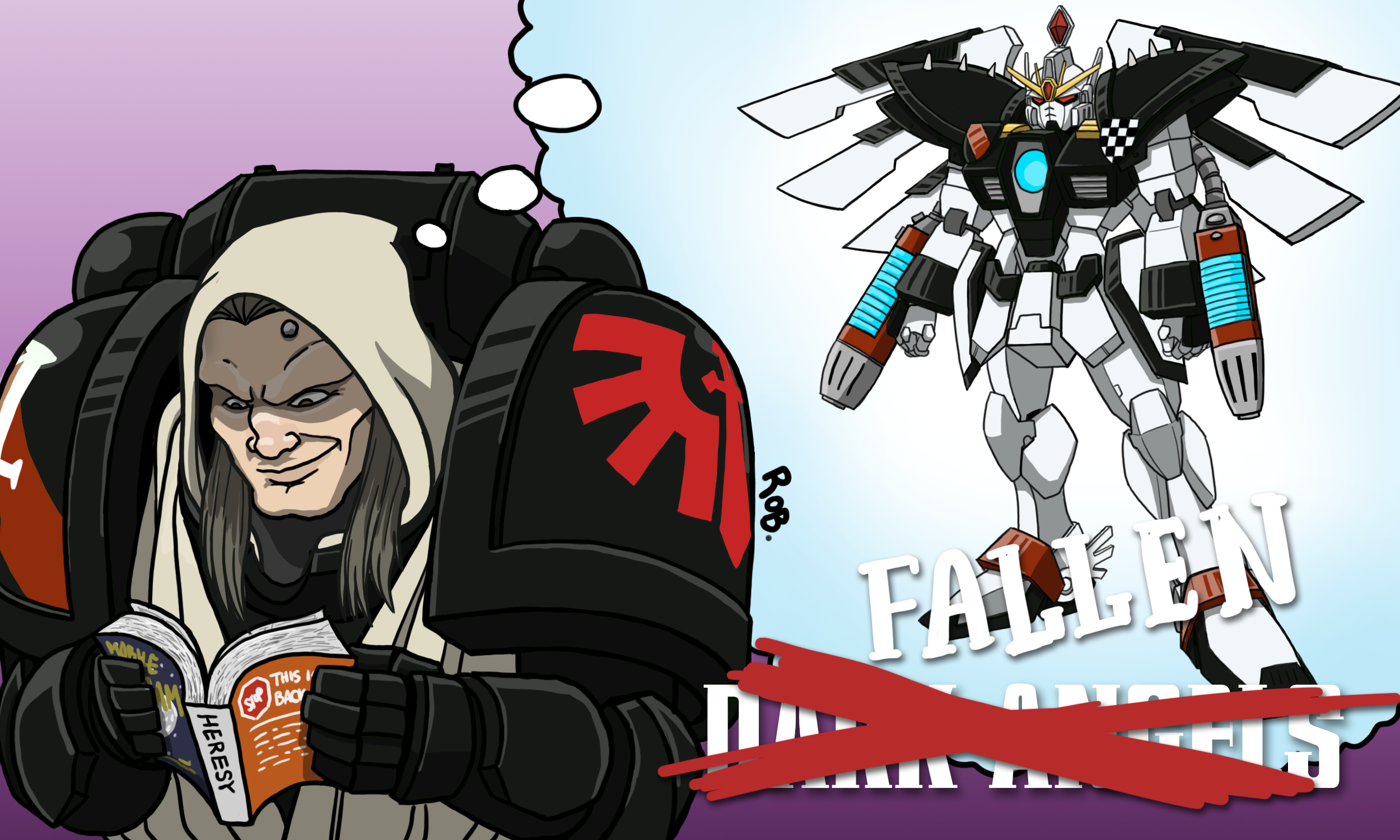 White Dwarf 464 gives us a new(-ish) Index Hereticus entry, covering the Fallen, the Darkest of all possible Angels. After taking a quick look at what was in it, we made Greg review it, mostly just to mess with him.

Just to save you some time: This is not actually an “update”, by any definition of the word. There is no new content here.

And I mean that: The rules content presented here is, word-for-word, the content from Vigilus Ablaze. The layout and formatting and fonts have been updated to match the 9th edition books, but that’s it.

That’s the review. If you were planning on buying White Dwarf 464 anyway, or have a subscription, you should still do that; it’s a fine magazine. But if you were planning to buy this issue for the Fallen rules specifically, then no, do not do that. You can probably find an old copy of Vigilus Ablaze on eBay for cheaper, if you don’t already have one.

Honestly, GW should just stop making Fallen a thing if this is what they’re gonna do with them. I’m struggling to think of a lower-effort update that they’ve done.

I know this is a niche army and it’s not in a full Codex Supplement, just a freebie in a magazine. But compare this to the Emperor’s Spears content, one of three or four new loyalist chapters that have gotten White Dwarf updates. That one had relics, chapter tactics, and warlord traits. This has one relic, and you know what it is.

That’s deliberately not presented as a question, because you actually do already know what the Fallen relic is, because you’ve already seen it in 8th Edition. It’s the Caliban Steel Blade, a S:User force sword that becomes d6 damage on a 6+ to wound. They didn’t even update the thing to be +1 strength like every single other power sword in the game (Rob: Or bother to change its rules to proc off unmodified 6s to wound). I don’t think any of us realistically expected 2W Fallen, but updating the profile on – and I want to stress this point because it’s completely insane – the only thing in here that even has a profile doesn’t seem like a stretch. 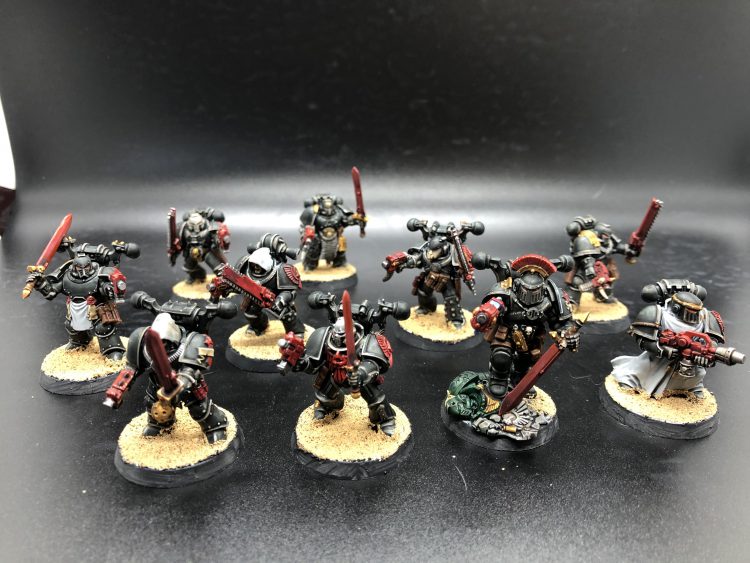 As for the actual Specialist Detachment itself, which I suppose it would be fair to cover even though we already did, it does a few things:

That’s it! That is all of the rules.

This is vanishingly close to being actually, literally, unusable. Specialist detachments are banned in the 2020 GT packet or most other forms of Matched Play, and Open Play doesn’t use CP so there’s no way to unlock the detachment in the first place, so that just leaves Narrative, which is mostly Crusade, and if you even can use the Fallen in Crusade, there’s not much point. I explained here that Fallen army construction is so constricted that it very nearly can’t be played at all, and Chaos Space Marines don’t have any Crusade content to speak of, so even if you could, what would be the point? As a practical matter, almost no games will happen under conditions that allow these rules to be used, and they aren’t worth using even then. If your response to that is “house-rule it”, a) I could already do that, and b) this release adds nothing to the conversation. It is not an update, just a re-printing.

If anything it’s worse, because it also introduces at least one timing interaction with the FAQ, and raises questions that I frankly don’t think are worth answering. For one, does this overwrite the removal of the IMPERIUM keyword from Fallen, that was in the Vigilus FAQ? The detachment was published both before and after that FAQ, so what’s the deal? I don’t really care, and neither should you: these aren’t serious questions, and GW isn’t going to answer them.

I would genuinely not be surprised to find that the White Dwarf editors looked at this issue during the proofing/layout process, saw that it was eight pages short, and figured it would be a quick afternoon of work to reformat the Fallen pages for 9th and paste them in. Why they didn’t spend the extra time to integrate the Vigilus FAQ updates or even change the profile on the relic sword is beyond my ability to fathom.

Rob: I have to point out just how astoundingly, amazingly, soul-crushingly lazy this is. To underline it as emphatically as possible, going back to that note about FALLEN in a Specialist Detachment gaining the IMPERIUM and FALLEN keywords – this is something that was removed previously from Vigilus Ablaze via an FAQ, when it became clear that your Fallen detachment was an IMPERIUM detachment, and as such could call on Inquisitors and Assassins and join up with Imperial Knights and other space marines. So uh, congrats – GW fixed the problem with Fallen not being able to take an entire army (as an Elites choice, you max out on three squads of Fallen in an army) by letting you take a Detachment of Fallen along side a Dark Angels army. Huzzah! Give up your doctrines for a few units of expensive, 1W chaos marines and the ability to cast Death Hex. This is what narrative players want, I’m told.

Straight up, this could not have been worse. I hate to keep banging the drum here, but I’m still trying to get my head around it: this literally does nothing. It’s a re-printing of rules that were released two years ago. They didn’t do anything.

I know it’s just me and maybe three other people (hi, Chase) that care about Fallen, but I would rather GW not even bother, if this is what we can expect.

There are six pages of fluff, which is actually a good amount. As you’d expect, a lot of it is re-hashing what’s already out there, but there are a few new pieces of information. Mostly it just feels like they de-emphasized the Fallen lore in the Codex, and moved it here. Which is fine! The Dark Angels book should be about the Dark Angels, and it makes sense to only mention the Fallen in that context, and bulk out the rest of their background in another publication.

The fluff here is, I think it’s fine? It’s standard GW quality and hits the notes you’d expect. I’m trying to be fair to it, which is difficult because I’m also reading through Horus Heresy Book 9: Crusade right now, and it does suffer in comparison to that. That’s not a problem specific to this Index Hereticus, just a general statement about how Forge World absolutely knocks this type of thing out of the park. There’s a couple of cool art pieces, including a very nice one of Luther, and some pictures of models – all of them Dark Angels.

The story is the same one you’ve heard before: Luther acts like a petulant child, Caliban detonates, and the Fallen are lost in space and time, to pop up randomly and get wailed on by Dark Angels until they either confess, die, or disappear again. This is the inverse of the Orks Never Lose postulate: Fallen can never win. If they win they just come back and lose another day, if they lose they’re captured and tortured, and if they die that still counts as a loss.

Individual Fallen vary – some of them are dyed-in-the-wool Heretics, some are just trying to get by, and others still consider themselves loyalists in the mold of the original Legion. A nice variation on that theme, that I haven’t seen before, is that some Fallen actually forgot that they’re originally from Caliban in the first place, and understandably freak the hell out when the Dark Angels kick their doors in and drag them back to the Rock for what seems like no reason. Get owned, heretics.

I did appreciate the attempt to bulk out the descriptions of Fallen, to invent a new Type Of Guy and then get mad at them. For example, some groups have learned how to make new marines, so there are new Fallen running around. On some level I don’t like this, because it moves them closer to becoming just another Chaos warband, but it does neatly solve the problem of what happens if they ever run out, and smashes any hope that the Dark Angels might ever be fully rid of the taint on their legacy. The article also calls out the existence of Fallen Librarians, which sounds like the worst job in the world, and is probably just there to explain why they’re allowed to be taken in the specialist detachment. Which makes it even weirder that it also calls out the existence of Fallen Daemon Princes; an unspeakably cool idea, but one instantly undermined by never being allowed to actually field them.

This section closes with a rehash of the last pages of Codex Dark Angels: the big news is that Luther has escaped and a legion-sized group of Fallen is massing for some unknown but surely nefarious purpose. The actual consequences of this are left frustratingly unexplored, but I’m not sure what else I expected. The Codex left things open-ended, so inevitably this would as well.

Overall, I don’t love this. It seems like a swing and a miss, adding almost nothing we haven’t seen before. I’m delighted to see Fallen mentioned at all, let alone to receive front-page coverage in White Dwarf. I love all Dark Angels, even the ones that suck. That said, I wouldn’t buy White Dwarf 464 just for this content. 90% of the fluff, and 100% of the rules (which are, again, literally unusable in most games and practically unusable in the rest), are already available. Unless you’re somehow a fan of Fallen and don’t already own both the Codex and Vigilus Ablaze, there’s nothing here that’s worth buying into.