In our Battle Reports, we cover interesting games we’ve played, talking about the plans we made, the tactics we employed, the mistakes that rendered those plans worthless, and the memorable moments that are the reasons we play the game. Crab-stuffed Mushrooms talks about his first game of 9th Edition against the sanguinary Blood Angels.

High Chaplain Astorath set foot among the ruins of the deserted factorum. His duty to the lost brothers of his Chapter more grim than ever: The opening of the Cicatrix Maledictum had seen more of the Blood Angels succumb to The Flaw of Sanguinius, the uncontrollable Black Rage spurning them to new heights of fury at the cost of stability. Inductees into the Death Company who did not fall in battle were doomed to meet an equally grim fate: The sharp blade of his executioner’s axe.

The insane howls of the surviving Death Company echoed loudly through the abandoned complex. Their cries reverberating to the bone despite the activation of audio dampeners. Astorath knew their rage and suffering would bring wanton destruction to the Blood Angels’ enemies – or their allies.

Astorath activated his axe. The High Chaplain knew he had to act swiftly. Custodes from a neighboring Torchbearer fleet were active in the vicinity. Their vigilance and sometimes violent censure of tainted gene-seed was not unknown. As he raised his axe, a golden light began to materialize…

This was our first game of 9th Edition. We kept the size of the game small, opting to play at the Incursion level (1000pts). In this respect, the GT Packet was helpful: It presented the rules in a small, spiral-bound format which made it easy to flip through when needed. Choosing one of the nine missions was simple thanks to the inclusion of a 2D3 table. 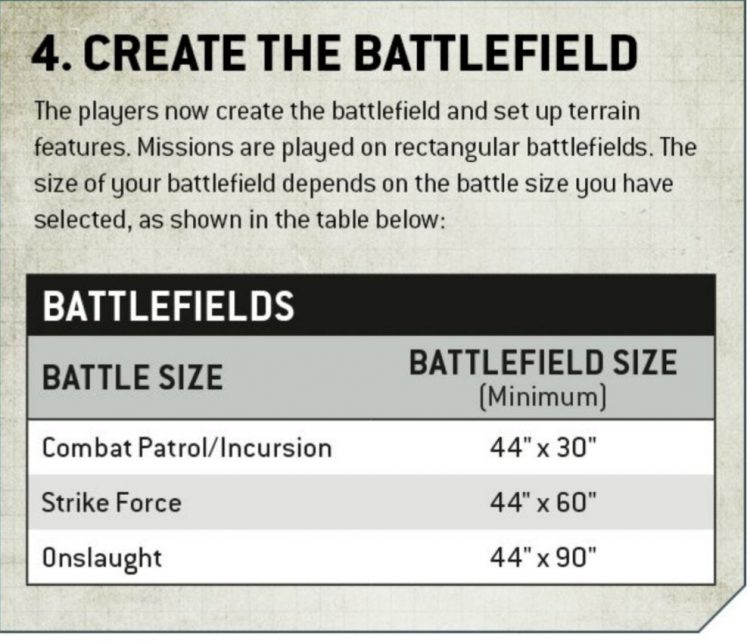 One oversight however is that the deployment maps for Incursion do not appear to have been drawn to scale, they appear designed for 44” x 60” (three Kill Team boards) instead of the more restricted 30” x 44” (two Kill Team boards). This can result in objectives being placed closer to the board edges than may have been intended. James “One Wing” Grover illustrates this brilliantly in his article, here.

GW moved quickly and updated the measurements to Crossfire in their latest FAQ for the GT Pack. They left the other maps alone which would imply that they’re correct. We’ll stick with the measurements in the book for future games of Incursion. 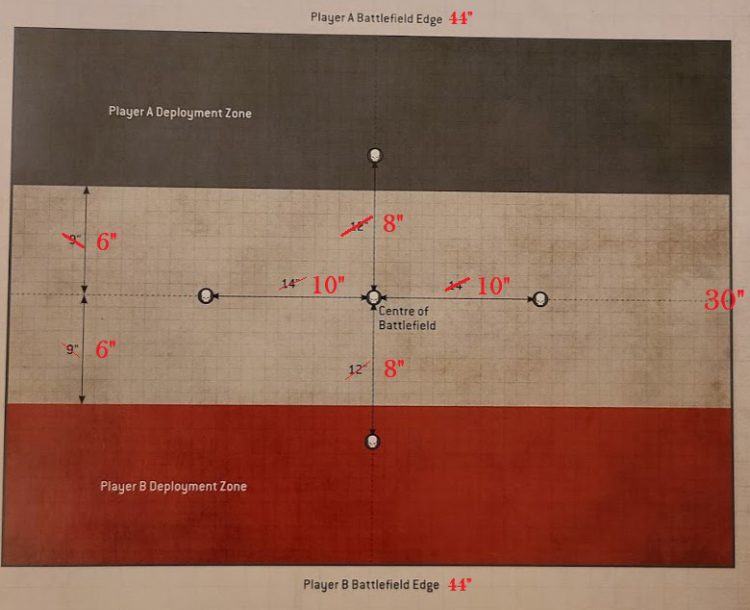 The Ascension mission includes the standard Primary Objectives (Hold One, Hold Two, Hold More) with a twist: Your Warlord gains Objective Secured. In addition, there’s an optional mission-specific secondary that allows you to gain bonus points for holding the central objective (with an additional point if it’s held by your Warlord). 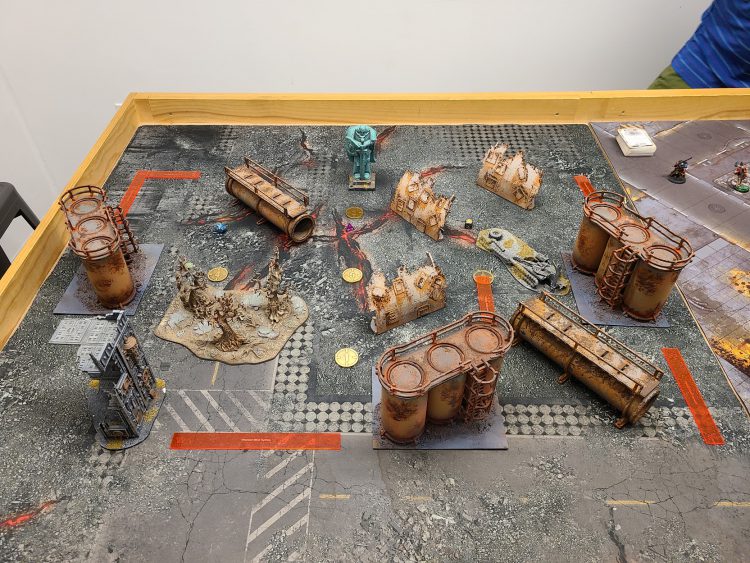 9th Edition places a heavier emphasis on terrain: The rules recommend 1 piece of terrain for every 12 square inches (rounding up). This can lead to a packed board but a more visually-exciting game. We used the picture guide in the “Common Terrain Features” section of the book to quickly classify terrain (specifically, the guidelines for Ruins, Battlefield Debris, Industrial Structure, Imperial Statuary and Ruined Walls).

Both of our armies are aggressive and we deployed accordingly, putting several of our units at the edge of the deployment zone and daring each other to charge. This could go poorly for either side if charges and counter-charges weren’t executed properly. Each side planted a squad on their closest objective in their deployment zone, leaving three up for grabs. Each of us left our Warlords in the corner for insurance.

The Blood Angels got first turn and proceeded to punish the Custodes for their brazenness. Buffeted by the Litanies of the Chaplains, Astorath, Lemartes and the Death Company flew across the tiny battlefield, slamming into the center squad of Custodes with the might of Sanguinius. The remaining units held back out of caution, only the Scouts moving forward to claim an objective.

Faced with impending doom, the Custodes’ general proceeded to blow 4 of his 5 command points on two of the new Strategems from Psychic Awakening: Arcane Genetic Alchemy (the Custodes equivalent to Transhuman Physiology) and The Emperor’s Auspice (denial of re-rolls for any enemy attack affecting the target unit). Both strategems protected the Custodes from the wrath of Lemartes and the Death Company, but then Astorath stepped up to the plate…

Amplified by multiple Litanies, Shock Assault and Savage Echoes, the High Chaplain rolled well with his Executioner’s Axe, inflicting 4 wounds as well as rolling a natural ‘6’ and guaranteeing 3 damage with at least one of them. When he was done swinging, there were no Custodes left standing. Astorath had castigated the Hykanatoi for their insouciance.

The remaining units of Custodes retaliated swiftly: All units on the table proceeded to charge Astorath, Lemartes and the Death Company. Lemartes survived due to poor positioning and allocation, but Astorath went down in a blaze of glory: Using Only In Death Does Duty End to take two Jetbikes down with him. 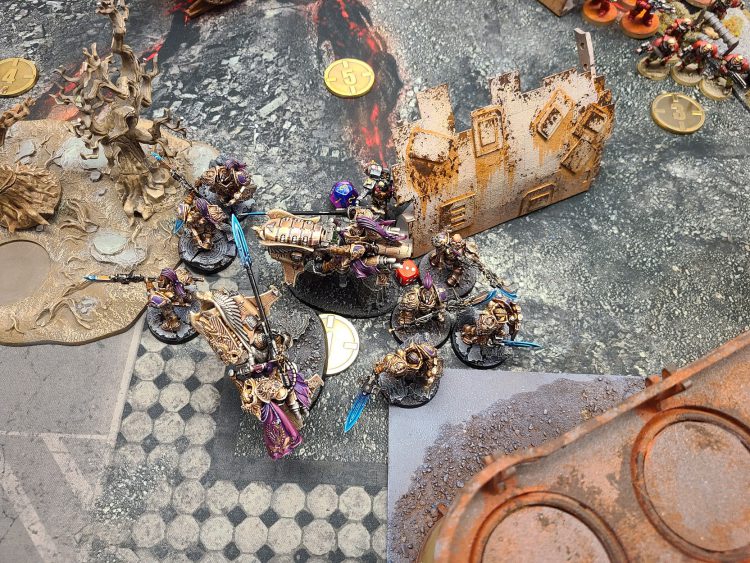 Primary Objectives are scored at the start of your Command Phase, but Progressive Secondary Objectives are often scored at the end of your player turn. We highly recommend using a score sheet, like the one invented here by Ruleshammer author Rob “Vrekais” Chilton to track all of this. You can even find an interactive version here.

The Blood Angels’ initial caution had paid off. Their hesitation allowing them to claim the maximum 15 points for primary objectives in their command phase (hold 1, hold 2, and hold more than your opponent). Inspired by the heroics of their High Chaplain, the Blood Angels began to seize the remaining objectives, leaving only one in Custodes’ possession. Lemartes fell in combat at the end of the Blood Angels’ turn (taking the last Jetbike with him) and allowing the Custodes to consolidate and charge at the bottom of Turn 2:

Seizing an opportunity to grab buku victory points, the Custodes’ Shield-Captain launched himself across the table for a Turn 2 attempt at Cut Off The Head (not hard given the size of the board). His bold action failed, but not without penalty: The Judiciar’s Tempor Mortis forcing him to strike last and suffer three wounds for his gambit.

The remaining Custodes had mixed success: Killing one squad of intercessors with shooting but failing to remove the second in close combat. The scouts were also eliminated. Due to the size of the board, the foremost squad of Custodes were able to claim the central objective (objective 5 in the photo).

The third turn was a subsequent murderfest, with the Blood Angels’ Relic Contemptor dread wiping out a squad of Custodes and single-handedly removing twenty-percent of their army. The Shield-Captain finished off the Judiciar  at the end of the Blood Angels’ turn (despite fighting last). The remaining Custodes proceeded to distance themselves as far from the dreadnought as possible, losing control of the central objective in the process.

The Blood Angels began to widen their lead, claiming the maximum number of points (again) for their primary objective in their command phase. Proceeding warily, the Custodes sought to secure the central objective: The last squad of Custodian Guard interposing themselves between the dreadnought and their captain. The squad of Eliminators (which had largely been ignored) advanced ahead to distance themselves from the Custodes and claim Linebreaker: 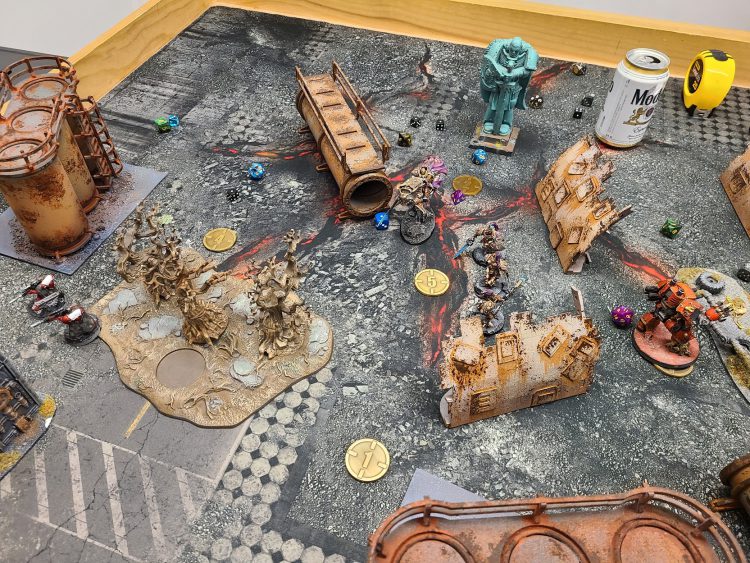 The Blood Angels Dreadnought boldly moved forward to face the Custodes. The Eliminators left the cover of the woods in an attempt to snipe the Custodes’ Warlord to no avail. Throwing it all on the line (and with just one remaining), the Shield-Captain and surviving Custodes threw caution to the wind and charged the Relic Contemptor. No mercy was expected, and no quarter was given in the ensuing melee. 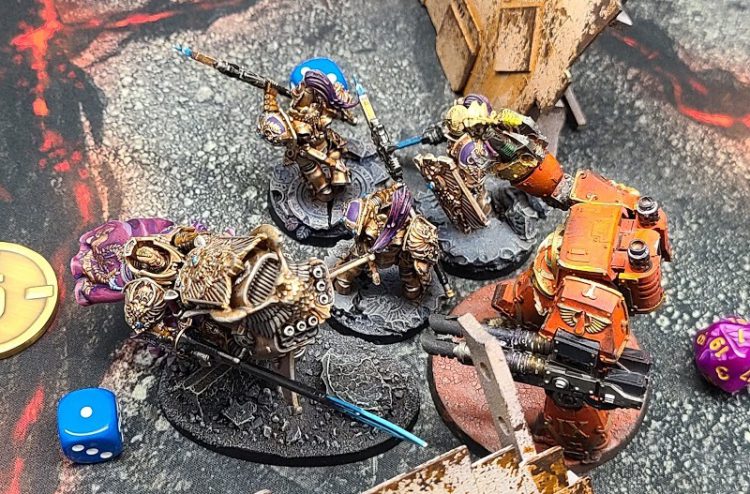 Playing on a 30” x 44” board is a different game and you should prepare accordingly. You’ll be up in each other’s business, immediately. Playing at 1000pts only grants you 6 command points, so don’t be surprised if you blow through them by your second turn (you’ll still get +1 in your command phase if your army is Battle-Forged). We might not adjust the objectives and deployment zone next time (despite the book maps not being drawn to scale). The new size allowed us to get down to business quickly, lining up charges and counter-charges from deployment.

No matter what army you play, 9th Edition encourages you to be aggressive and you’ll need at least one unit that can hold its own in combat, especially on the smaller boards.

Pudge Hefflefinger (Blood Angels): Strong melee units, especially when buffed with re-rolls or chaplains are going to go further than shooting with bolters. Storm Shield units like the Bladeguard or Assault Terminators will be key for holding objectives.

Crab-stuffed Mushrooms (Custodes): The emphasis on primary objectives is a breath of fresh air for Custodes, where their tough units and new Stratagems excel. The hard part is having enough units to capture them!

You may have noticed that I didn’t use my faction stratagem: “The Eagle’s Strike”, which forces my opponent to spend an extra CP on their next stratagem if I kill one of their characters. This could’ve swung the game in my favor. This is because I forgot. Don’t get excited and forget the basics: Know your stratagems!