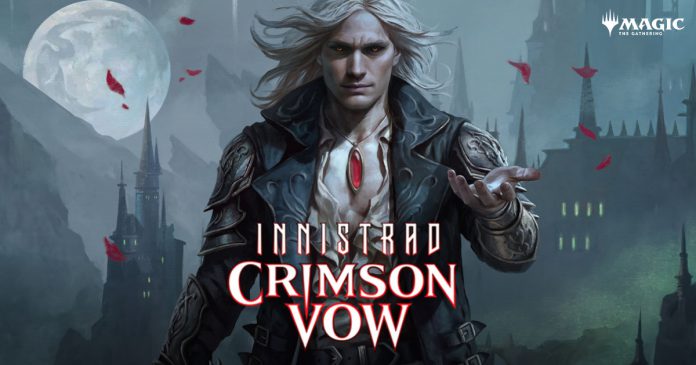 Magic’s newest expansion has us returning to Innistrad just in time for Halloween. Innistrad: Crimson Vow is the second of two expansions set in the horror-themed plane, and this second set sees the two main vampire lineages uniting in the most consequential wedding in the history of the plane to thwart the besieged humans’ attempt to reset the balance of day and night and plunge the world into the Eternal Night. A returning set means returning mechanics, and we’ve got our share here, plus some new ones to ponder. In this article we’ll talk about the mechanics and offer some thoughts on what they mean for different formats and how they’ll play.

BPhillipYork:  I like double-faced cards, modal and transforming ones, so I’m glad to see them back. The interactions between daybound/nightbound werewolves and non-bound werewolves get a bit confusing. What about cards that force transformations? What about cards that prevent transformations? These lead to slightly frustrating rules quandaries, and obviously, the rules are out there, but it’s definitely a case of where you wish they’d invented the mechanic long ago.

FromTheShire: Yeah, I was annoyed that they didn’t errata the older werewolves when the last set released, but it is what it is. In the grand scheme of things it’s not a big deal and these sets have done so much to make werewolves playable in EDH that I’m happy to forgive them. Nice to get even more support.

BPhillipYork:  I really like Cleave, it’s essentially the same as Overload, but reversed. There’s a lot of flexibility in design space here, the example of a search being for a specific thing, or removing the specifier is perfect.

Also, it enabled this work of genius. 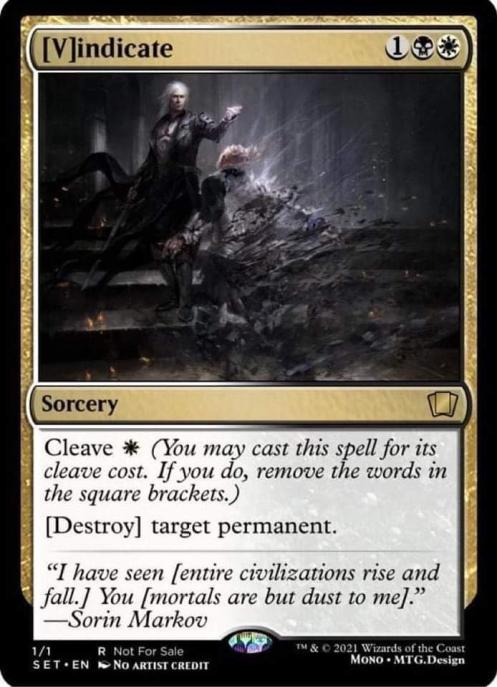 TheChirurgeon: I really like the multicolor cost rider on most Cleave cards. It’s an interesting to do multicolor without actually doing multicolor, and on most of the effects the card doesn’t feel like complete trash if you have to cast it uncleft.

FromTheShire: A lot of time with a mechanic like this it ends up being “Ok, you CAN cast this for its cheaper cost, but in practice never actually do that” which kind of defeats the purpose, but I agree that these are pretty decent across the board on rate, and the color restrictions make them require actual deck building restrictions which is good.

BPhillipYork: So this is like reverse mentor. I’m not sure why they didn’t call it apprentice but, it’s okay. I guess not entirely completely reverse but certainly reminiscent. It’s certainly neat that they can template out training, then they can put triggers on training. In terms of commander I think this will see limited use, the number of attack steps is generally small and people actually attacking tend to either be buffing out or going extremely wide. I don’t think we’ll see training on the kind of small utility creatures that see a lot of play in the format, so it’ll mostly be relegated to non-singleton formats.

TheChirurgeon: It takes a lot of work to make a set’s bog-standard +1/+1 counter mechanic work and this one doesn’t get there for me. Even in limited it’s liable to be a bit too slow and reliant on keeping creatures around in a format that has plenty of removal.

FromTheShire: Savior specifically is pretty good in constructed but the training cards need to also have another effect you’re looking for to be playable for me, the counter alone isn’t worth it. 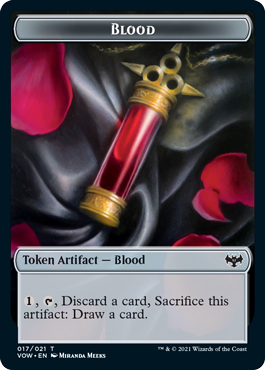 BPhillipYork: These are okay but 1, tap, discard a card, sacrifice this artifact: Draw a card is a bit lackluster in my opinion. Nice if you need to mill or fill your graveyard, but clues only require you to pay 2 mana to keep the extra card. What is important in my opinion about Blood Tokens is they are yet another way to generate tons of artifacts, and if you have a deck that can either tap artifacts for useful things like Clock of Omens or Galazeth Prismari, or you get a trigger whenever you create an artifact like Reckless Fireweaver or when you sacrifice a permanent like Havoc Jester these are all ways to do those things, and generally can create them also in a triggered way, so you may well be able to set up an infinite loop there somehow, which is something to watch out for.

TheChirurgeon: Blood Tokens completely fail for me on the flavor front – nothing about them really creates the feeling I want. Otherwise, the effect is fine, and the effect can be attached to more red spells since it doesn’t just flat draw you cards.

FromTheShire:  Agreed on the flavor front, the actual tokens are good though. In Rakdos it’s trivially easy to make discarding an upside and you can make great decks that care about artifacts, plus it’s another way for red to get card advantage, or at least selection. After red and white struggling with card draw for so long, it’s nice to see some ways for them to not be abysmal without completely shattering the color pie.

BPhillipYork: Disturb is back / still here, there weren’t that many cards with Disturb in Midnight Hunt, so good to see more of that mechanic. It’s essentially still embalm, but still leads to some neat cards.

TheChirurgeon: Disturb is still great in limited, where casting things from your graveyard has tremendous utility. The Haunt-like mechanics of things like Distracting Geist are fun to think about, and help mitigate the downside of putting aura enchantments on your creatures.

FromTheShire: We kind of figured from the number of Disturb cards in Midnight Hunt that there had to be more coming, and we got some good ones in Crimson Vow. The mechanic isn’t terribly original but that doesn’t mean it doesn’t work.

BPhillipYork: Exploit is back and it’s very vampire and zombie themed so that’s okay with me. I think it’s a good mechanic, pretty well balanced in general and leads to interesting and innovative game play.

TheChirurgeon: I really like how exploit on zombies plays into the set’s Frankenstein’s monster feel.

FromTheShire: After the first set I wasn’t expecting Exploit in this one but it’s welcome. There’s some great effects, and I am always a huge fan of sacrificing my own creatures for value.

Next Time: The Set’s Monocolor Cards

That wraps up our look at the mechanics of Crimson Vow. We’ll be back later this week, looking at the most noteworthy cards in the set, starting with the monocolor cards in the main set, then in the following article we’ll cover multicolor, colorless, and double-faced cards before moving on to the set’s Commander decks. As always, if you have any questions or feedback, drop us a note in the comments below or email us at contact@goonhammer.com.