Into the Funkoverse! A Skirmish Delight Fueled by the Universe Mixups of your Wildest Dreams 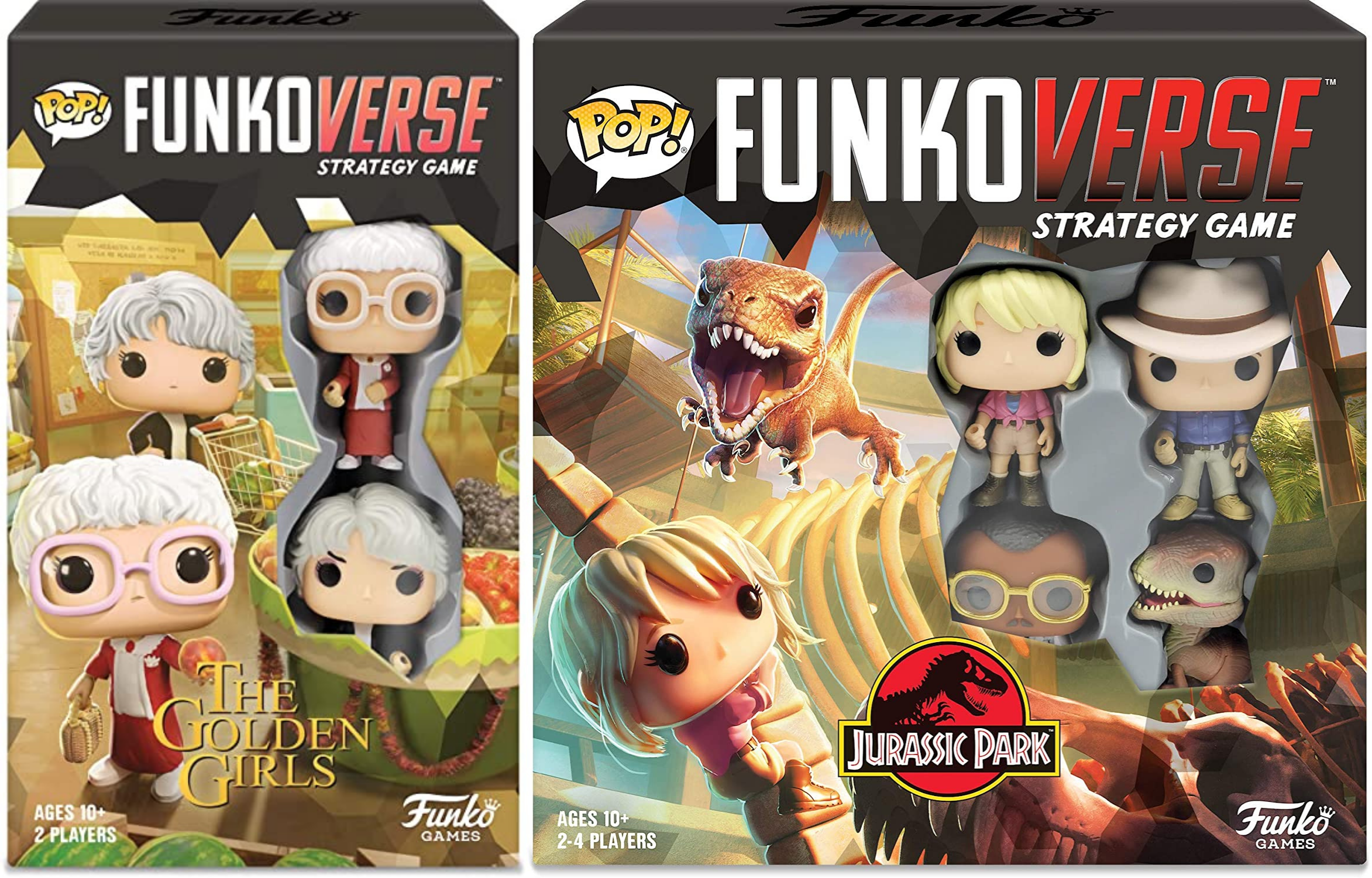 If there are only two things you need to know about Greg, Goonhammer’s site admin, it’s that the only thing he loves more than the Dark Angels are Funko Pops. He’s got an impressive collection; just shelves chock full of them. Absolutely loves these little vinyl collectables. Now me personally I’m not so much into the full-size pops, but I am into the Funkoverse skirmish game. The announcement of this universe blending skirmimsh game was met with a bit of surprise and quite a bit of skepticism from the board game community, but the design team at Prospero Hall has once again delivered a compelling little game.

Funkoverse is a light strategy skirmish game that draws on Funko’s deep well of licensing agreements to pull in characters from a vast array of universes. Think tactical Smash Brothers; you’ll see Oogie Boogie from the Nightmare Before Christmas join forces with the Kool-Aid Man to battle the Jurassic Park/Rick & Morty team-up you never knew you wanted. Each character comes with a suite of special abilities and items from their universes that they’ll deploy over the course of the 30-minute melee.

Now, it’s possible you’re already sold. I was pretty much bought in as soon as I saw the Golden Girls box sets. However for those of you still scratching your head or reading this in disbelief I’ll get into the meat of system. It all begins with list-building. While it’s totally legitimate to pick your team of Pops based on the characters, like Harley Quinn with a Velociraptor or the Shark from Jaws with anyone, devotees of skirmish games will want to go one step deeper. Fighters fall into general types, like Tanks or Support characters, and each have a few abilities. These abilities are activated by spending the appropriately colored token from your pool. Because the composition of the pool is defined by the Characters you bring to the table, some basic list building synergies begin to appear.

Tokens are not character-restricted. The grey token generated by Dr. Grant can be spent on any character’s grey skill. Limiting your characters to those that provide certain colors can be a way to boost consistency at the cost of flexibility. A robust color-focused pool means every character is a constant threat to pull off a powerful move, though you restrict access to certain ability types. This consistency is also valuable because of the cooldown system. Part of each player’s setup is a countdown track. Once spent, tokens are moved to the track with more powerful abilities landing further up the track. At the end of each round, everything is pushed down the track one space, eventually returning to your supply to be spent again.

Once you’ve got your list, you and your opponent will pick a battleground and scenario. This is one of the many ways in which additional purchases are a boon to your experience. On top of new characters, most expansions also include a double-sided board with maps and scenarios to go with them. While the core scenarios are the same (every box has a Capture the Flag scenario, an Area Control scenario, and so on) the map layouts mix up strategy and contribute to the environmental silliness. It’s one thing to battle with Jon Snow in Winterfell, it’s quite another to see the Night King striding along the Florida Boardwalk where Blanche Deveraux would find her next gentlemanly conquest.

These scenarios are not terribly complex; you’ll get the gist of them just from their name. What they do, however, is prevent Funkoverse battles from devolving into a game where a couple of mid-sized plastic Pops stand next to each other while you roll dice. The extra victory points generated by the scenario force you to move about the board using your abilities to gain an edge. The strategy supplements the combat. This is good, because the combat is pretty basic.

Outside of any abilities or items, combat comes down to grabbing a couple dice and rolling. There’s nothing fancy here. Star symbols benefit the attacker, shields benefit the defender, and crits count for 3 of whatever symbol you were looking for. Ties favor the defender, though if the Attacker wins they’ll knock over the defender. Attack a knocked-down Pop successfully and they’ll have to spend a couple rounds on the cool-down track waiting to respawn. The system works and keeps the game moving, but it isn’t anything special.

So over the course of 30 minutes or so, you and your opponent will dance around the board picking up VP crystals and smacking each other around. The Kool-Aid man can move through walls (naturally) while Pride of St. Olaf Rose Nyland supports her friends through bonus actions and the occasional one-two punch. With enough sets, each player can control up to 3 figures and I definitely recommend getting enough models to do so. There are generic characters that also represent their universes, but without a Pop to represent them they have fewer abilities and are more generic.

And that brings me to the major criticism. As is probably clear by now, this game shines due to the multiverse mashup that only appears through multiple purchases. Presumably due to licensing agreements, box sets are limited to a single universe. While the game is plenty fun using exclusively Jurassic Park figures (and the amber VP crystals with mosquitos in them is a nice touch) this is a game that shines in the remix, and for that you and/or your pals will have to get multiple boxes. Mixing and matching is seamless and easy, so spreading the collection across friends is certainly doable, but it does put a limit on list-building and for me this isn’t a competitive enough system to justify picking up a box just for the synergies. You also can’t use your existing collection of Pops (sorry Greg). The models for this game are a new size.

Ultimately however, this criticism isn’t enough for me to reserve a recommendation. This game is perfect for light downtime gaming and with a few boxes the team variety is as limitless as its potential future. Funkoverse has an incredible library of licensed properties to draw from. While something like Marvel may seem like an obvious future set, so far the team at Prospero has surprised us. I don’t think anyone would have ever guessed they’d see the Golden Girls in a skirmish battle game, and the Kool-Aid man was another inspired choice. This is where having a team with licensed chops serves them so well; they’re good at figuring out what makes a character interesting and translating that into gameplay.

It wouldn’t be surprising if you’ve never heard of Prospero Hall. They’re a Seattle-based design house that keeps a relatively low profile, though they’re behind a steady stream of consistently good games over the pas few years. Their focus is the oft-maligned genre of licensed game and are proof that licensed games don’t have to be relegated to the closet after grandma picks something off the shelf at a toy store. We’ve recommended Villainous and Horrified, and their other games like Top Gun, Jaws, and Bob Ross: The Art of Chill are all highly regarded. Given this track record of excellence in licensed games it’s no surprise they found a home with Funkoverse, figuratively and literally—they were purchased by Funko and continue to work on a variety games in addition to being the in-house design team.

If you’ve seen these beady eyed little figures in the games section of your local shop and walked by, consider stopping next time. Funkoverse pops off my shelf with regularity, and would be especially good for those with young gamers (think 8 years old, plus or minus a year depending on your kids). While I don’t want to oversell the system to readers of a miniature wargame site, the simple grid-based skirmish system has enough meat on its bones for us to enjoy and the cavalcade of characters bring a smile to my face every time. At the very least, you should be able to challenge Greg to a game once it’s safe to see other humans in real life.