Iron Harvest: What If the Great War Had Stompy Lads? 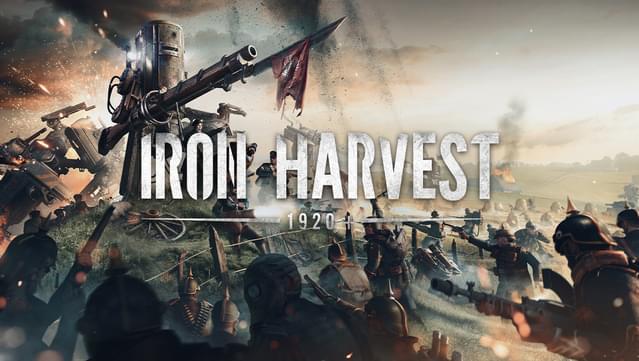 What if a World War was fought with giant, deadly can openers?

Such is the future-past posited by Iron Harvest, the steampunk-ish (the preferred descriptor is “dieselpunk,” if we wish to indulge such hair-splitting) real-time strategy game set in an alternate Poland in the 1920s, created by Polish artist Jakub Różalski and originally used as the setting for the boardgame Scythe. This video game, from German studio King Art Games and published by Deep Silver, is something of an expansion upon that world: a campaign-focused RTS released in September 2020 is rare, and if it’s an iteration of something usually played on the tabletop, well, that’s right up our alley here at Goonhammer.

In its gameplay, the title most closely resembles the Dawn of War franchise, and within that franchise, most closely resembling the first installment — with no small amount of Command and Conquer: Red Alert 2 in there as well. The field-mining aspect of Red Alert 2 is nowhere to be found, of course; that mechanic has long since fallen out of style. But there are iron mines and oil wells to be captured, and these serve the same basic purpose as the control points from Dawn of War, providing resources to build units and dictating the tactical flow of play as opponents seek to leap-frog towards each other, seizing resource points and pushing towards their enemies’ bases.

While this is a game where you manage a base and build structures to produce units as a core part of the gameplay loop, rather than managing a squad of heroes whose subordinate troops get reinforced over the course of play, there is one notable mechanical influence from Dawn of War II: the “dot” cover system, where when sent to contextual cover such as sandbags or a low stone wall the dot that shows the player where the unit is going will breakdown into model-by-model dot displays of how each constituent soldier in the unit will deploy into cover. This allows you to always be certain your infantry will hunker down on the correct side of a killzone, rather than leaving themselves exposed and you, the player, not noticing until it’s too late. As in Red Alert 2, you can also tell units to take cover inside civilian structures dotting the map to provide some extra defensive protection against opposing infantry charges, but be wary: cover, whether out in the open or inside buildings isn’t all that useful against…

…Mechs. The big, angular, polluting stompy boys of the alternate Great War are this game’s defining aesthetic calling card; rather than tanks, the Germans, Russians, and Poles have developed cool-looking if quite impractical two to four-legged war machines to prosecute the first real industrial war on the continent. Mech use will be the key to your success throughout the game; though the viewpoint character for the Polonia campaign is a perfectly fine but quite rote teenage girl, her sniper rifle, and her bear, it’s the mechs that are the real stars of the show. That’s what you’d expect, given that the game is literally based on artwork of them sticking out in the Central European countryside like so many deadly, ominous thumbs.

At their best, the mechs scythe — get it? — through infantry and crash through the rather beautiful destructive terrain that King Art Games has made something of the calling card of this title; infantry hiding behind waist high cover can see it stomped over, and infantry hiding in civilian buildings can find them stomped through. Once the hapless saps are out of cover, buzzsaws and flamethrowers and gatling guns make short work of them as they scream and die, and the mechs are only able to be contained by excellent micro work and positioning with heavy weapons infantry teams (most mechs are vulnerable to being struck from the rear) or by overwhelming firepower from other mechs.

At their worst, mechs are fussy babies who require your full attention as a player during an offensive, especially mechs who focus mostly on deploying powerful melee attacks. While you can stomp through buildings and stone walls with no problem, dirt roads, train tracks, and bridges can prove far more formidable from a pathing perspective. In a way one can appreciate this; the tanks of the real Great War were fussy machines too, constantly getting stuck in mud and getting outmaneuvered. If you’re going to use such awe-inspiring death machines, you’ve got to be ready for the drawbacks. Still, behaviors such as “random animation slowdown to a crawl as the mech walks towards an enemy building” or “walking slowly backwards towards an enemy infantry unit that has ambushed the mech from behind rather than turning to face it” don’t add to that feeling. They feel more like a lack of polish in pathing and animation. If you right click and hold when giving a move order you can force your mech to a new facing, but then you’re at the mercy of the pathing engine again as the unit interprets the best way to implement your order.

As for the setting, it’s empty-calorie stuff, but that’s perfectly fine for a game that’s mostly here to show off the cool destruction physics and big diesel-engine toys. The “Rusviets” are a particularly amusing mashup of Tsarist Russia and Soviet Russia, with the Soviet red star emblazoned on tall pompous Cossack-like hats, and scary political commissars enforcing the ideological discipline of…absolute monarchy? It’s very broadly sketched. Do not worry, however; fan favorite Rasputin is lurking somewhere in the shadows. The Saxony Empire is of course the Imperial Germany of the Great War, with the spiked helmets and wolf heraldry and a Kaiser, but taking Dresden as its capital rather than Berlin. Polonia is plucky, heroic Poland, which here has not suffered partitions and depredations at the hands of Russia and Germany in the preceding years and is in fact a healthy republic of some sort with a massive agricultural base, who are in danger of losing it all. As an American, far be it from me to criticize anyone for engaging in a little bit of historical revisionism in their game in the service of nationalism; besides, this is a fantasy world anyway. That said, with a Polish creator and a German studio realizing his vision, I’m not surprised some Russian reviewers haven’t taken kindly to the relative depictions of the three nations in the game.

The campaign is quite fun; it might be a good deal more fun, if it were designed a bit better. A campaign mission can have two phases, generally speaking. First is the main phase, which any RTS player will recognize — amassing a force, taking primary and secondary objectives, wiping your opponent off the map. But then on some maps comes a defensive phase, where usually you protect an objective you’ve taken during the map against waves of enemy forces which appear from off the map and focus on you. You’re rarely very well set up for this second phase coming out of the first, and the enemy will be spawning more or less in what were your back lines for the last twenty minutes of gameplay as you scramble to set up new defenses and in some cases a whole new base. If the enemy does manage to destroy whatever plot objective you’re guarding — and this can be infuriatingly easy, given the rules about destructible scenery seem to arbitrarily apply to these objectives as well, taking them from full health to destroyed in one blundering mech stomp — you have to try again from the autosave at the beginning of the defense phase.

Even on maps without this ersatz wave-based defense mode at the end, this can lead to hours-long missions, especially if you’re a stickler about doing secondary objectives, which will require rooting around through most of the map. But it can still be rewarding — in fact, the Medium difficulty provides quite a brisk challenge — and for those who enjoy the content, long missions can be a good thing, not a bad one.

Final Verdict: If you liked Dawn of War, there’s definitely something here for you; it’s a competently-made RTS game with good-looking graphics, well-directed cinematics, and an engaging-enough story. The setting isn’t really my thing, but it’s pretty easy to tell that for people whose thing it is, they’re doing a pretty good job with it aesthetically. Multiplayer seems a bit light at the moment, but at $50 on Steam, the price point seems correctly calibrated for the game they’re handing you.