An article by TheArmorOfContempt    Events and Challenges Road to Adepticon    February 7, 2020    0

Greetings reader! It is I, TheArmorOfContempt, one of the lesser known remoras that has attached itself to the constantly growing leviathan known as Goonhammer, and I am here to share my upcoming journey to Adepticon with you.

But first, a little about me: I’ve been a fan of Warhammer 40K since I was a teenager and like most of you I was instantly hooked by its unique setting. Unfortunately, my initial foray into the hobby was a bit of a false start, and it wasn’t until the end of 6th Edition that I truly entered the fray by starting my own army. In less than 2 years’ time I found myself attending my first Adepticon in the Spring of 2016, and boy was I hooked! As an Illinois native I am fortunate that the world’s largest tabletop wargaming convention happens within several hours of where I live, and the amount of my hobby time dedicated to it only increases year after year. Basically, I am an Adepticon apostle here to spread its truth and light to you, the ignorant and debased reader. I consider myself a competitive player, but I am not what some would call a “meta-chaser” I’ve lovingly devoted my time to only a single army over nearly 6 years, and I’m keen to impress with my painting just as much as my tactical “skill”. This being said I still show up to any event I participate in with an intent to win, and I’m something of a medal/trophy chaser. Yes, that’s right, I am on the hunt for all the dumb skull trophies, and as many high school quality plaques I can get my greedy little hands on to fill that void in my sou…I mean display case! 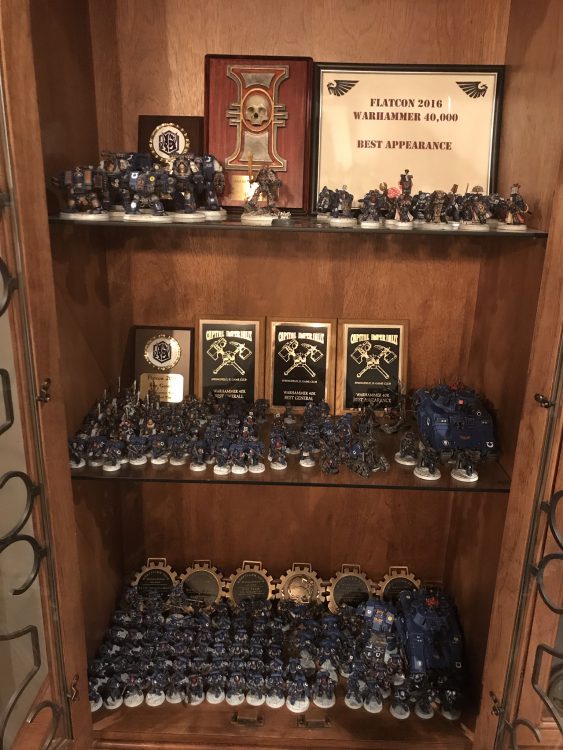 Adepticon, Past and Present

It would take an insane amount of words to cover the volume of events that take place at Adepticon, but for those uninitiated, it is a massive convention that focuses primarily on table-top wargaming and is held in Schaumburg, Illinois (Author’s Note: Chicago) at the Renaissance Convention Center. The primary body of the convention takes place in 3 massive halls, but also spills out to fill up all the other various rooms and lobbies of the convention center. This means you will find entire halls given over to current Games Workshop or Fantasy Flight Games products, while still finding small rooms where the same 10 dads can be found playing their annual Warhammer Epic tournament that they’ve been doing since the convention was founded. 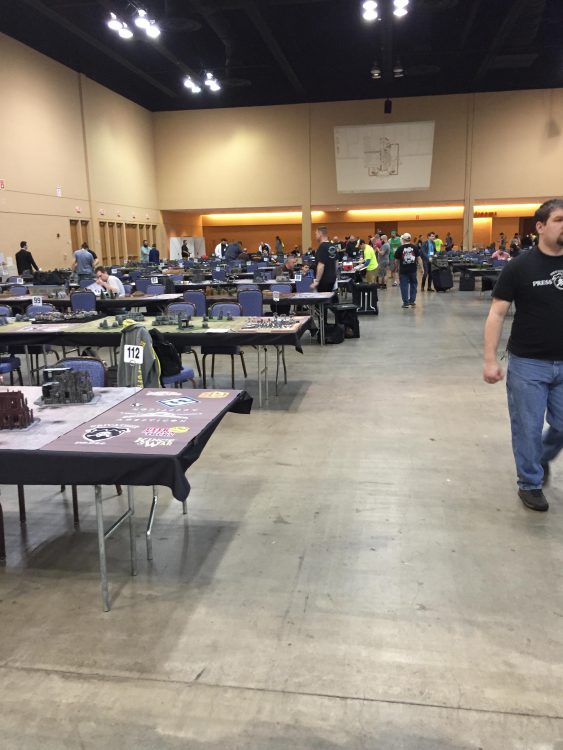 Author’s Note: These two pictures combined are just HALF of one of the 3 main halls that make up this convention.

Unlike the Las Vegas Open, Adepticon does not really have a single selling point in the form of a massive tournament, in fact… it has several! The two most notable are the 40K Championship, a singles tournament that has historically had space for 256 players (although it has been increased for 2020), and the 40K Team Tournament an event involving over 500 players broken up into 4 person teams (also expanded for 2020).

This later event is quite a spectacle as it truly encompasses all aspects of the hobby with players often presenting their combined armies on massive displays, and even dressing up in uniforms or costumes to match the theme of their team/army.

I have participated in both of these events, and enjoyed them both, although the Team Tournament is much more rewarding in my opinion. The Championship unfortunately iinvolves 4 matches in a single day to narrow down to a TOP 16 finalist field, who then play a single elimination bracket the next day. Anyway, I could go on forever about what this convention has to offer, so let us move on to what I have planned this year.

THE ORDER OF BATTLE

If you’re a mid-30s something parent like myself you’re likely all to familiar with the struggles of finding time for your hobby. With this in mind Adepticon can easily be described as “My Weekend”; that time where I can shed all parental responsibilities and disappear into my own world for a five day stretch. One must fight the temptation to sign up for every event possible, leaving not even a single hour of the day unused. Adepticon is a combination marathon, gaming experience, and party, and an experienced person must take all of these into account. Despite all these warnings I tend to go heavy on my schedule, I only get to do this once a year after all.

So without further ado I have signed up for the following events: The Cracked Mirror Match, The 40K Friendly, 40K Trivia, and The 40K Team Tournament. As in previous events I will be bringing my Ultramarines to battle, they’ve been a labor of love for just around six years, but my dedication to them has almost paid off as my collection has reached such a size that the amount of painting required for these events is thankfully small. This is very fortunate indeed as my personal life has left me with very little time to paint, and as my painting skills have only grown this has resulted in me spending more time on less models.

A new event, and perhaps the 40K event that I am most excited for. A small half-day tournament of only 16 players, the Cracked Mirror Match will feature Space Marine players going up against each other with predetermined lists with identical units with weapon upgrades and Chapter Traits being the only thing different between each army.

While I have every model on the list present in my collection I decided I needed to paint new Terminators, because my current models are nearly 4 years old, and they look pretty shitty compared to what I produce now. With this in mind, fellow Goonhammer contributor Alfredo “Bonds” Ramirez was kind enough to send me all five of the Space Marine Hero Terminators, FOR FREE! Guess I owe him a drink at the convention. 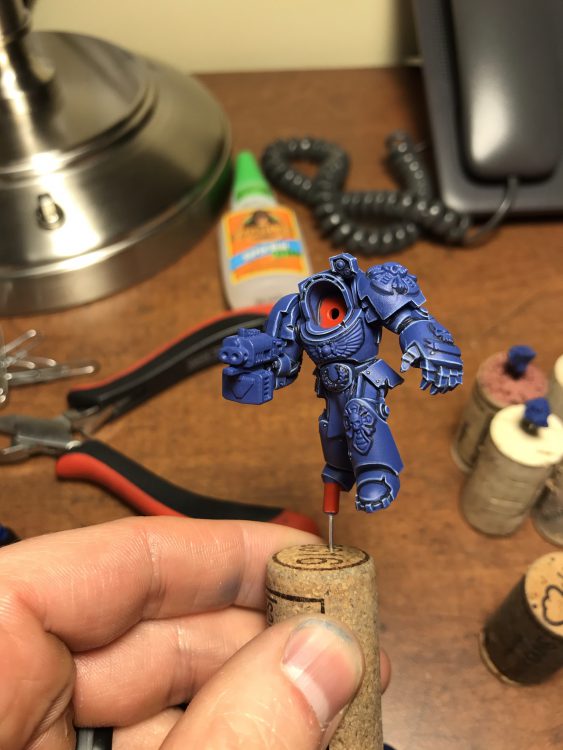 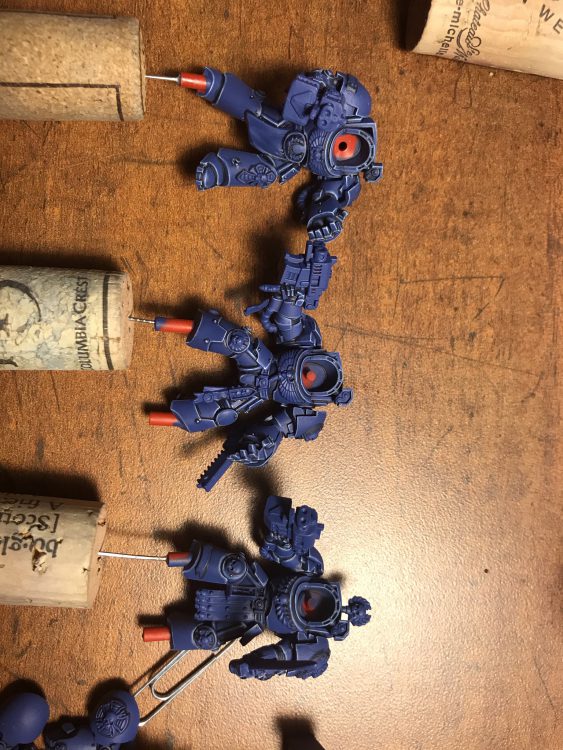 As you can see, I have already started on them. In addition, I am working on Plasma Exterminators for my Inceptors. I’ve actually had 3 pairs of these weapons magnetized for nearly 2 years, but never got around to painting them after the slog that was painting my first 6 Inceptors.

A very popular event that involves whacky missions usually themed around a movie. Participants are encouraged to bring softball lists and lots of alcohol, they’re then divided up at random and assigned to colored teams where their final scores will be added up to determine winners. This event is a good way to get some casual 40K in. I plan on taking the above Terminators to this event, and in addition will be taking a Land Raider Redeemer. Unfortunately, my old Redeemer suffers a similar problem to my old Terminators, it looks like shit. So I am in the process of refitting the Flamestorm Cannons onto my Land Raider Excelsior (because paint scoring is important!) a much more impressive looking part of my collection. 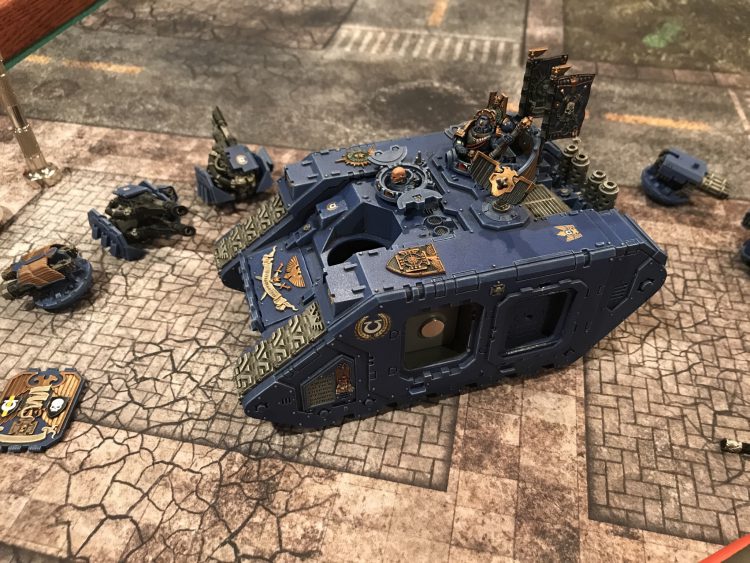 Perhaps the most fun I had at Adepticon last year, everyone involved in winning this event is now affiliated with the Goonhammer brand in some fashion. Not much to do in preparation other than memorize each of the Astartes organs and their function. Come get wrecked.

Team “Go Beyond,  Plus Ultramar!” will return, complete with a giant banner, a sexy display, and sweet togas to represent the glory of Guillman. Unfortunately we didn’t really have the time to redo anything major for this event other than each person involved painting new models like this recently completed Invictar. So for those of you who are veterans of Adepticon 2019, our schtick won’t have changed too much. 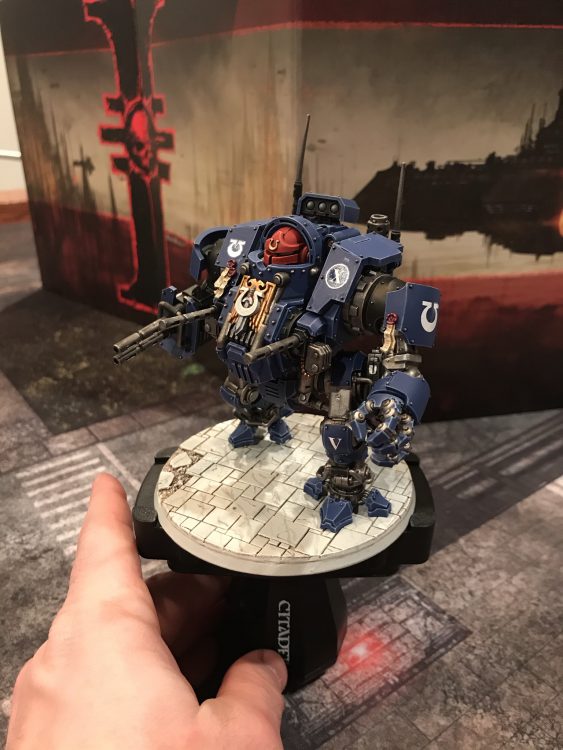 In reality our goal is simply to place better than we did in 2019. Ultramarines haven’t ever been truly competitive, but with the new Marine codex in hand and a much more versatile army list we hope to climb ever higher towards the top of this flagship event.

Since I don’t have a massive pile of models to paint between now and the end of March my future Road to Adepticon updates, the limited progress I’ll be sharing in future updates will go more heavily into my lists, and an examination of each event in detail, along with my plans for them. Hopefully this will help to inspire you to make the trip to this, the greatest of all Cons.

Got any questions or feedback? Drop a note in the comments below, or email us at contact@goonhammer.com.