As I mentioned in my introduction to Adepticon I would provide an overview of each event I planned on attending along with what I will be bringing and why. First on my list is the Cracked Mirror Match, a new event, hosted by a local (IE: within an hour drive of me) player who informed me of his plans to run an Adepticon several months ago. The overview is as follows:

“Welcome to the AdeptiCon 2020 Cracked Mirror Match. As stated on the registration page, this is a silly event. You are trying to win games, of course, but the goal of the event is to ensure everybody has fun while doing so. In the days of yore, mostly 3rd and 4th edition, mirror match was a semi-popular format of play, where everybody brought the same list and had to make do. The game has evolved since then, and that format is somewhat impractical in the current edition. To that end we present the Cracked Mirror. Stuff looks largely the same, but the lists are distorted from one another. After years of hearing about the bringing of cheese to friendly events, we decided it was time to host an event that kiboshes that as much as possible. Now, let’s get to the rules…”

I’m not going to copy/paste the entirety of the rules packet here, but suffice to say we are allowed to take whatever upgrades we want for each of the listed units. The event is also purely WYSIWYG, so if you’re looking to maximize your units and say, put a thunder hammer on a scout sergeant, you best have it modeled.

As I have already mentioned I will be running my Ultramarines, which according to the rules I am forced to take (WYSIWYG, no Ultrahands for me). With this is mind lets go over my choices:

Chapter Trait: Codex Discipline – I’ve always enjoyed the Ultramarines trait. While a case could be made for Stealthy/Master-Artisans the flexibility provided by this ability has always proven useful time and again. Also, as we will see when I go over the individual units I will likely be spending much of the game up-close and personal with my opponent.

Warlord Trait: Adept of the Codex – Reliable since 8th edition hit. The game setup will only allow the standard 8 CP from the common battalion + battle-forged combo. With this in mind AoC feels like a no-brainer. I don’t plan on spending additional CP for any further Warlord Traits, but that might change.

Relic: The Standard of Macragge Inviolate – This wonderful relic from the Ultramarines supplement has been tied with Seal of Oath as one of my consistent favorites. But given the units available it seems the clear choice. I plan on getting stuck in with my opponents.

Now for each unit and the upgrades I plan on bringing with each one, my choices may not be the most optimal in every case, but I’ve done my best to maximize their performance.

Primaris Captain: Equipped Power Sword and MC Auto Bolt Rifle – Since I was unwilling to shell out $80-$100 for the Powerfist + Plasma Pistol version I go into this event with this little wheeny. I am sorely tempted to spend CP to give him a Burning Blade, but given my limited CP it’s a hard choice. 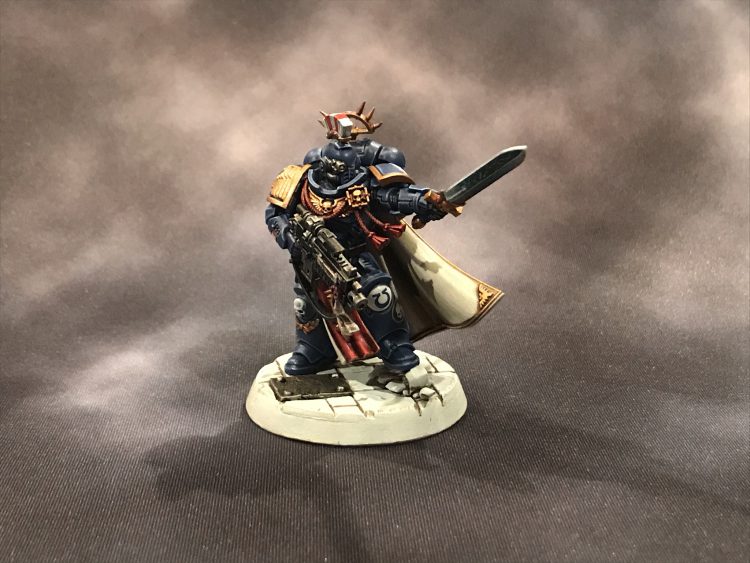 Chaplain: Equipped with Crozius and Combi-Flamer. WYSIWYG and I was unwilling to cut his own off just to outfit him with a Combi-Plasma. 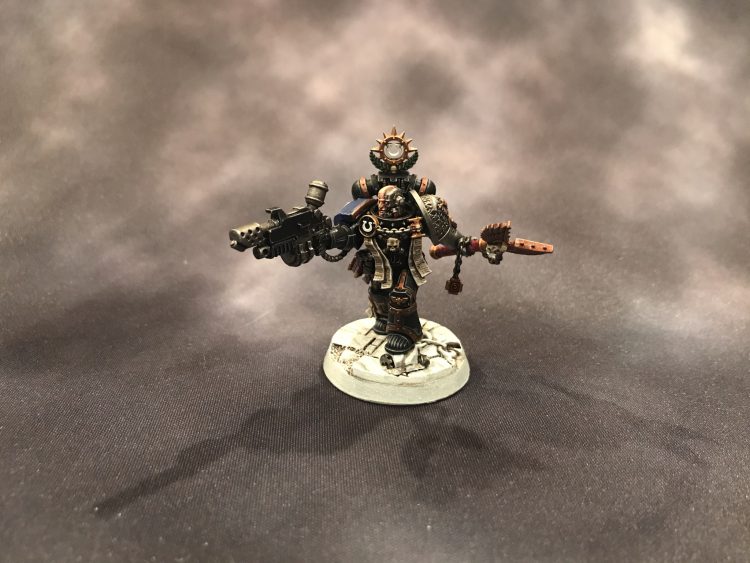 Author’s Note: This is actually my Chaplain Cassius model, a simple head swap on the Overkill Model with the old Command Squad head that looks like T-800.

Primaris Lieutenant: Equipped with Power Sword. Kind of the same problem one experiences with the Captain. Regular power swords suck, and it’s once again tempting to give him something better. That being said a good portion of each list will be single wound models, so it isn’t as crippling as it might be in competitive matches. 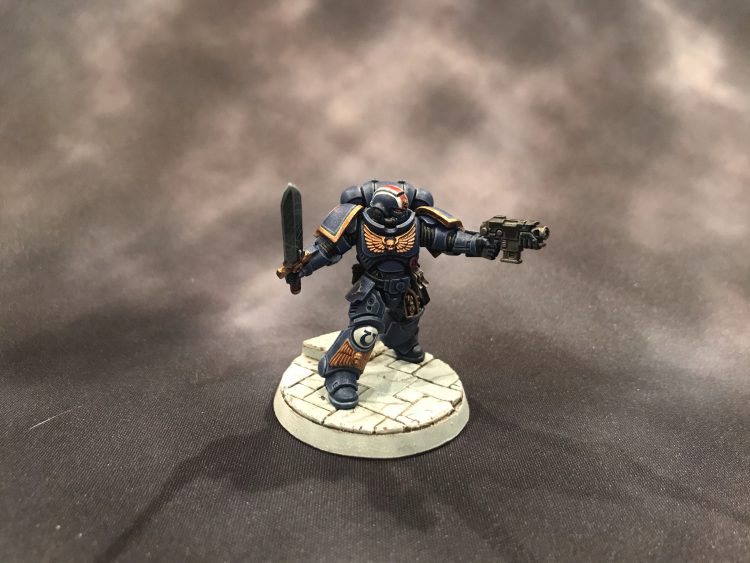 10x Intercessor Squad: Equipped with Bolt Rifles with Thunderhammer Sgt. Bolt Rifles are an obvious choice for Ultramarines, while perhaps not as feared as Iron Hands with Stalkers, -2 Bolt Rifles rapid firing at 30 inches is nothing to be scoffed at. 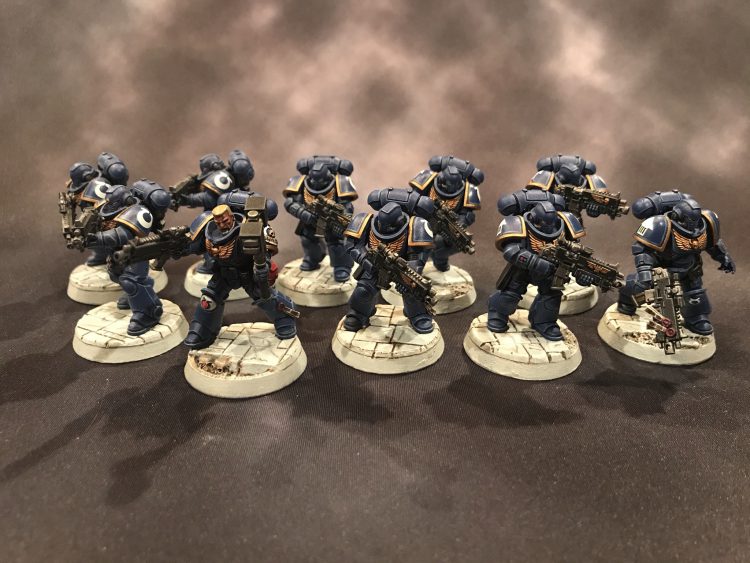 10x Tactical Marines: Equipped with Grav-Cannon, Plasma gun, and Combi-Plasma/Power Fist on the Sgt. I will likely have the special weapons riding in the Razorback while the remaining 5 tactical marines work as rear objective holders. Turns out I don’t have many spare thunder hammers lying around my bits box, so I had to settle for a fist. If I have time I might paint another up, but that is a big IF. 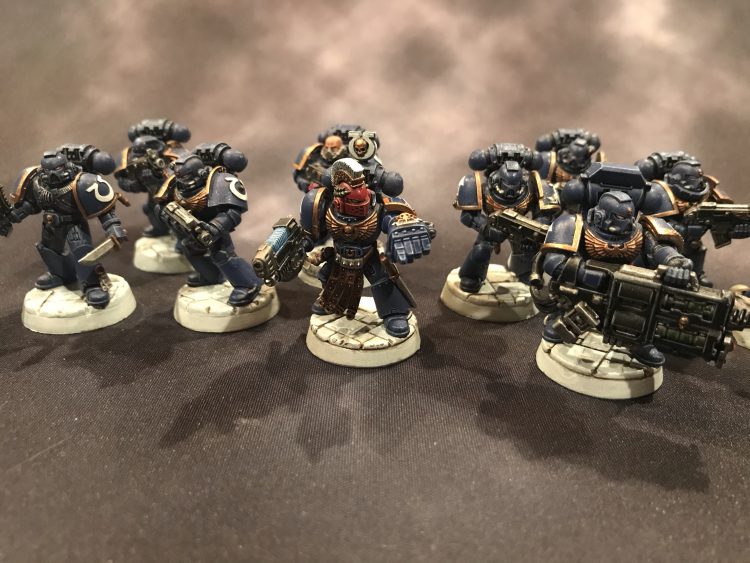 Author’s Note: All my melee, heavy, and special weapons are magnetized, something I’ve been doing for years. This means I have a pretty extensive collection of them, unfortunately Vanguard Vets and by extension thunder hammers are something I didn’t really get around to except for a few to stick on Bike Captains.

10x Scouts: Equipped with bolters and missile launcher. Sgt gets…sifts through bits a power axe! So it looks like I have a ton of power fists, and I am the kind of psycho that even magnetized his scouts, but unfortunately none of those power fists are really modeled for scouts, since they all have pauldrons on them. This guy might find a thunder hammer in his hands, if he can steal it from the Intercessor. I spent a lot of time trying to decide on a missile launcher or heavy bolter, but I figured I am not going to have much ranged anti-tank so a missile launcher might be important for the few enemy vehicles. 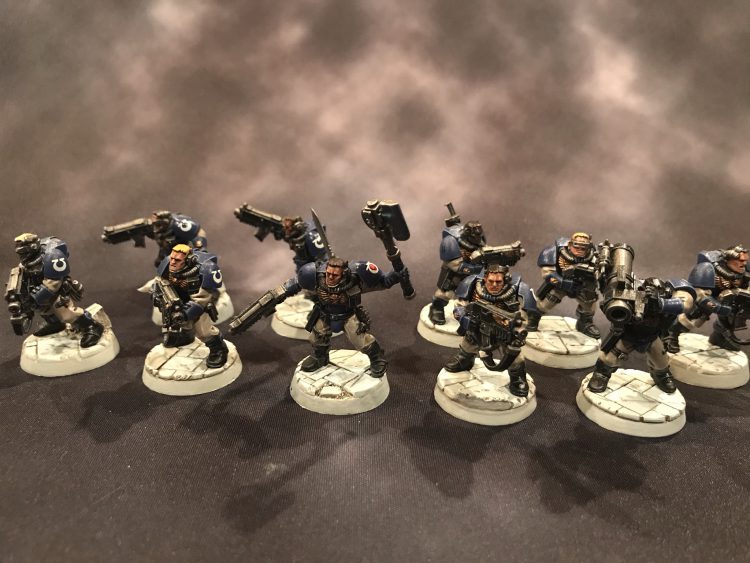 Dreadnought: The classic box dread is the assigned dreadnought, and I decided to go with a twin-lascannon and powerfist with underslung heavy flamer. I’ll be honest this guy being given the character trait by Iron Hands players is probably what I fear most in this event. It is such a powerful ability, and I assume mine will need duty eternal to really make it anywhere. Either way, I plan on cramming him straight down my opponents throat. 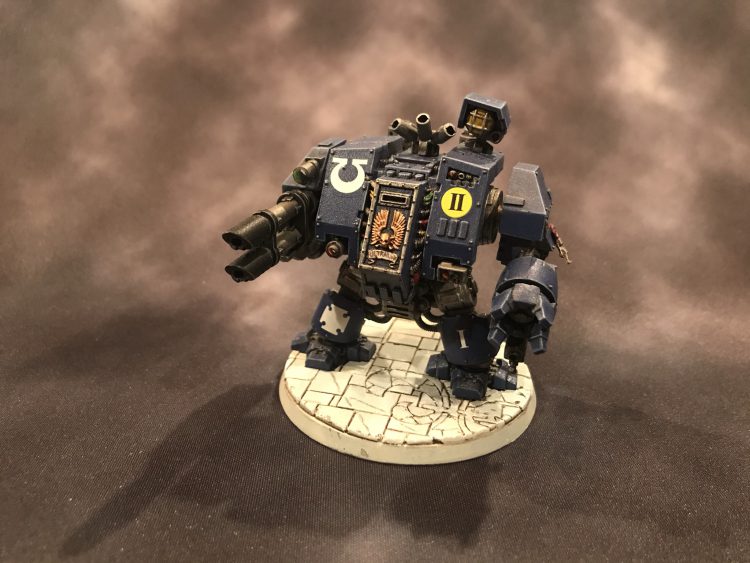 5x Terminators: Standard terminators. Not much to say about them other than I will be going with the missile launcher again. They already put out enough 1d firepower that the assault cannon feels redundant. They’re also the oldest models in this list, and the ones I am currently (IE: slooowwly…) replacing. Here are the old ones. 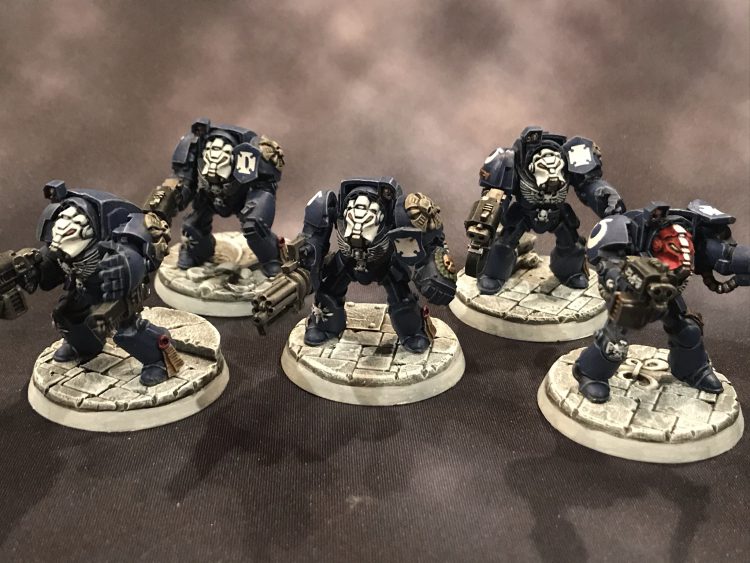 Primaris Ancient: This guy’s purpose was covered in the relic portion. Otherwise he will be looking to be near either my Hellblasters or Inceptors. 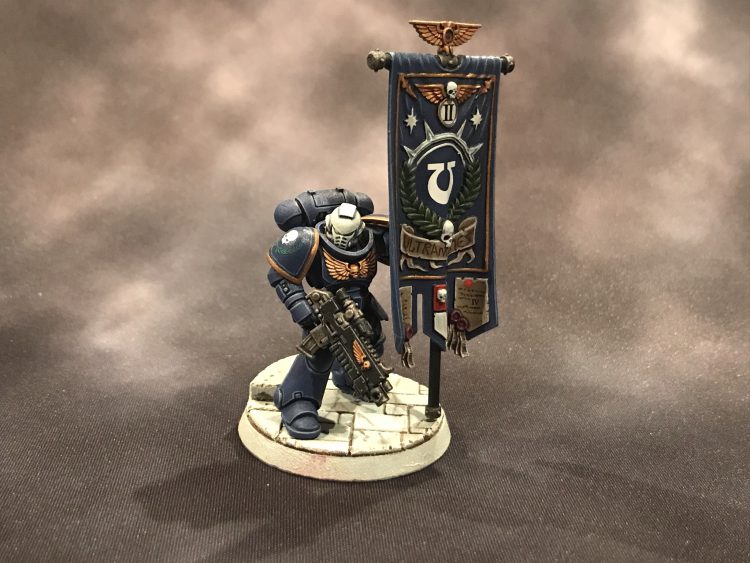 3x Inceptors: My other painting project. As I mentioned in the intro article I magnetized these guys nearly 2 years ago, and now the time has come to make use of the plasma executioners. These guys are perhaps the most critical unit I have access to. 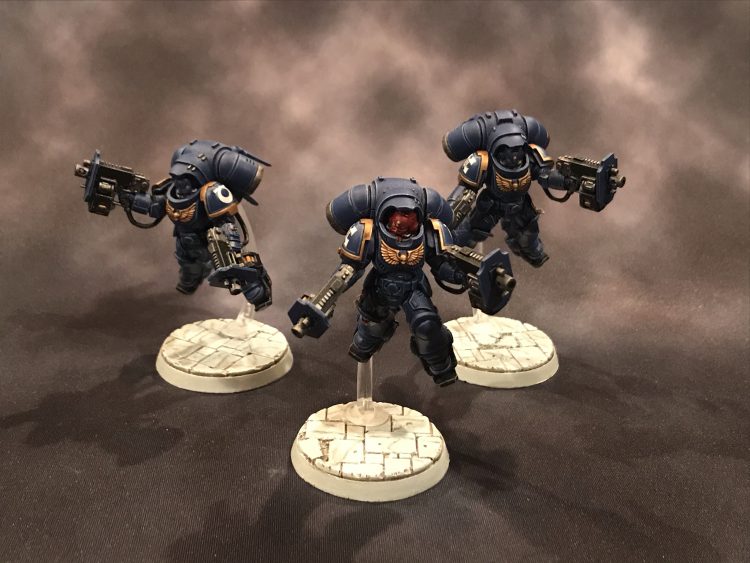 5x Hellblasters: I plan on running these guys with their standard incinerators, but unfortunately they will be walking the whole time. I would not be surprised if any raven guard opponents choose to deepstrike them, giving them two sources of deep striking plasma that can come in outside of auspex range…scary. 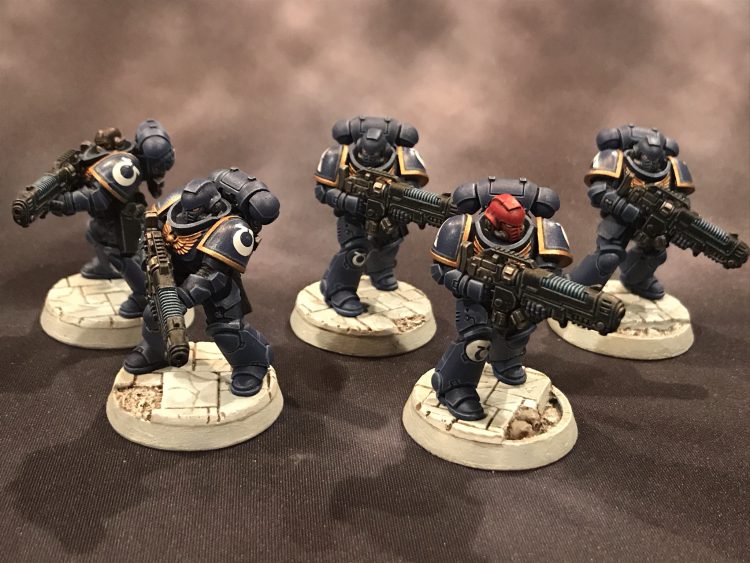 Razorback: This guy is a return from the index days of 8th edition when I motor pool filled with twin-assault cannon razorbacks, before GW decided to drastically up their points. 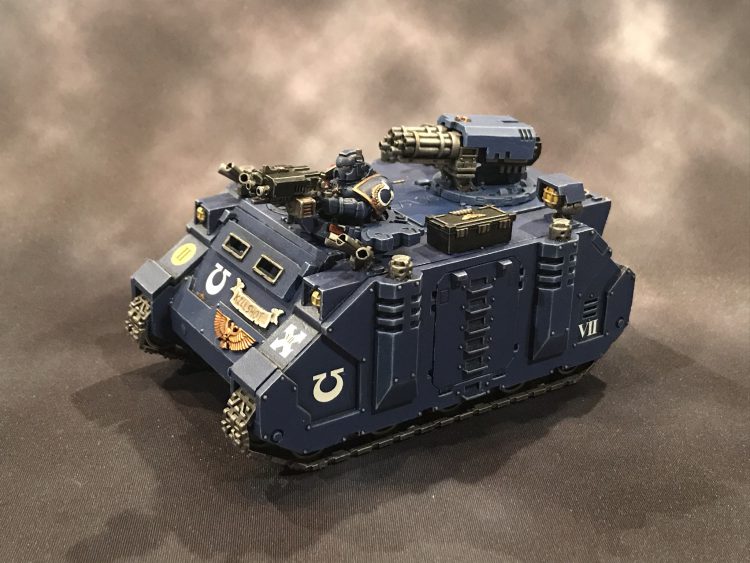 Threat analysis: While this format is meant to make players fairly equal there is no denying that the chapter supplements have really made each Marine chapter play differently and there are more than a few things that my opponents can bring that worry me. Iron Hands are always scary, and the ability to make the dreadnaught a character while using their infantry to absorb wounds on its behalf is not something I am looking forward to.

Salamanders haven’t made much of a splash in the competitive scene, but I could easily see someone bringing a Powerfist Primaris Captain buffed to Strength and Toughness 6 equipped with the Relic that prevents wounding on 1,2,3 to be a nightmare in this event. There a good number of Warlord Trait/Relic combinations they could sport to give them a distinct edge in combat. Fortunately, they’re still forced to walk wherever they go, so avoidance might be the strategy.

Raven Guard as I mentioned have some tricks that can let them make greater use of certain units. The same applies to White Scars, but the list restrictions do help to mitigate their greatest synergies. The Raven Guard’s standard trait does a lot to make them more survivable, and their doctrine bonus could mean we could expect some players to bring scout snipers as well as a Lt or Capt with relic sniper rifle which could very easily kill any of the characters on this list.

Finishing Touches: I will likely do some final tweaking of my list before the convention hits, primarily when it comes to deciding on pre-game stratagems. Every player is going to be hurting for Command Points from the onset, and the choice will come down to making use of them from the start or saving them. Ultramarines haven’t been seeing much in the way of success since the new codex hit, but on the other hand a uphill battle against more competitive chapters should make it fun.