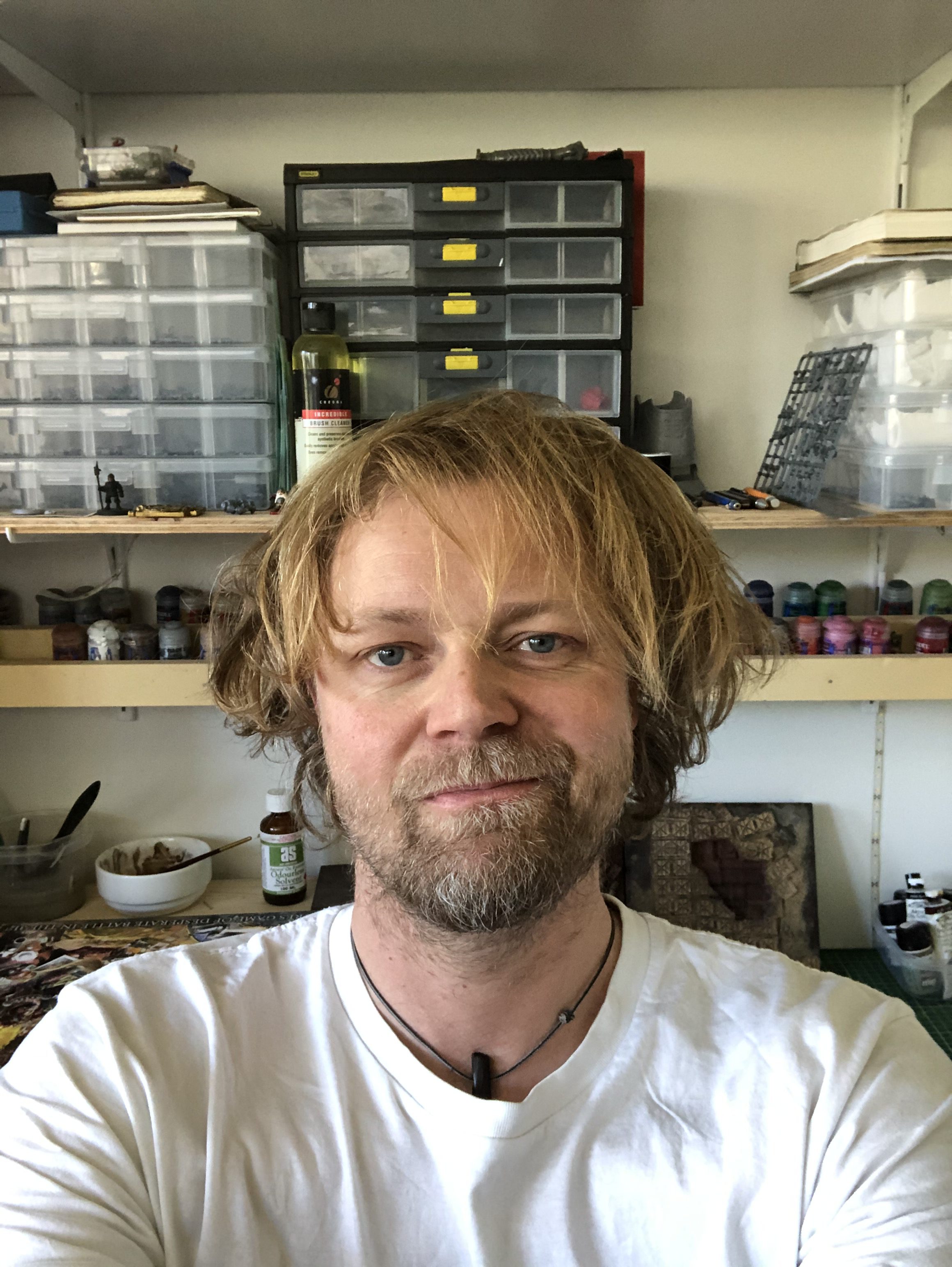 “I see the models as base materials, as substrates to build what I see in my head when I read the books. The depth of this universe comes from 30 plus years of contributions from dozens of authors and thousands of hobbyists and is truly unrivalled in any other fictional creation ever. I feel I can build my own personal piece of this universe.” Unlike many of us, Jeremy Wood doesn’t paint to play. He builds stunning dioramas that manage to capture the scale of Warhammer combat while grounding his presentation in the “realism” of conflict.

I first came across Jeremy’s work in the Independent Characters podcast Facebook community. Jeremy doesn’t play Warhammer; his engagement with this hobby has always come through the rich lore of the universe.

“When I was around 10 or so I had a copy of Heroquest and then Advanced Heroquest which I played with friends for a couple of years, I painted a few of the miniatures (with enamel unfortunately) and then completely left the hobby until I bought the Space Marine game on Xbox in 2011. I had always been aware of the 40k setting but hadn’t read any of the books or played any of  the games before. This game was my first introduction to the setting, lore and aesthetic of the 40k universe and I really loved the game. I didn’t rush out and read the books or buy any models or anything but it got me interested in the universe and from time to time I started reading about bits of the lore on the wikis and sometimes watch Youtube lore videos. In 2016 I bought Horus Rising and I found that I absolutely loved the setting, scale and depth of the universe. I read the first 3 books in a week.”

“I read False Gods and had an idea for a diorama I could make, I started looking online for pictures of miniatures that were more than just simple gaming pieces,I found Richard Gray’s amazing work but I remember the first pieces I found that really spoke to me were Migs’ (of the Ironsleet) Vlka Fenryka. These models remain to this day some of my favourite models that I have ever seen. The grim, ancient, yet far future character of the models was the perfect representation of the setting for me, it’s a collection I still strive to emulate. Within 24 hours I was in Warhammer Sydney buying my first set of Space Wolves.”

It’s hard to consider the minis I paint “art” after looking at Jeremy’s work. I’m still working on getting decent layering while Jeremy’s photos and dioramas are masterworks in emotion and tone. Gritty feels like an overused descriptor these days, but it’s appropriate here. Games Workshop’s own art is often bright and colorful. It highlights the tremendous detail on the models and makes them appealing on the table. This is in contrast to how the conflict of the 41st millennium is portrayed in the Black Library novels we all read. I asked Jeremy about this contrast. How and why does he paint this way?

“Put simply, that is how I picture it. From the monumental events described to the harrowing personal tragedies of individuals in this galaxy, it is all real. I want my models to look real, I want to build a slice of the universe, frozen in time. I want to be able to look at these pieces and feel like I recognise this view or this world from something I have read or even just imagined. I want to photograph these models in a way that is descriptive and creates an emotional response, like a photographer in a war zone, I want to show the reality of what eternal war looks like.”

Jeremy’s process has evolved as he’s done this, but as you can imagine it it requires quite a bit of planning. One of the steps I found most interesting was that Jeremy considers and measures the final resting place for his dioramas as he plans them out. As they’re going to have to reside somewhere in his home, he spends time creating diagrams on graph paper and moving cardboard cutouts of the models around in the display until he’s happy. As you can imagine, it can take quite a long time. How long depends on the project.

“[It] depends. At the beginning of the year I wanted to do the first Alpha Legion Diorama in 4 Months which I achieved as I had started in December 18 and finished in March. I could do this quicker now though as I had to kit bash a Rhino for that which I had never seen done before. A more complicated piece, although much smaller, was the Bridge section of the Verum Tenebris. This took nearly 5 months as it was mostly (90%) scratch built and kitbashed/converted. There were literally hundreds of decisions I had to make on this model to make it work and end up visually where I wanted it. Decisions are where time disappears. ”

“The end date of this was initially going to be October as I thought I could do it in conjunction with my large Quartus Fifty diorama. As this project developed however I quickly realised it was too complicated and splitting my focus would, instead of keeping both projects exciting, compromise both. I hate to leave things unfinished so I put all my effort into finishing it. I started building the Warhound Titan at the end of June and finished the whole Diorama including building the display cabinet and fitting custom Perspex in the first week of October.”

Think you want to try a diorama like this yourself? I’ll leave you with this excellent advice regarding planning, and making sure you don’t lose focus.

“Photograph everything you have done every time you do it, look at these images on the train, bus, toilet, whatever, and critically judge them, work out what you need to do when you next sit down to build/paint, when you do get to your desk you will know exactly what to do first, decisions are where time disappears and most of them can be done remotely if you have loads of descriptive photos.

Do it every day, even if it’s 10 minutes here and 5 minutes there, do it all the time. A lot of the jobs on a large model require time to dry/set more than time to actually do necessarily. Plan to do these between feeding kids, having a shower, cooking dinner etc.

I write in my day planner at the bottom of my work stuff things I have to do in a day on my models, usually its about 3 or 4 things that take a total of about 20-30 minutes,  fit a wall section, pin a model, glue the base etc. break the project into tiny pieces and you can do it faster as you have less decisions to make.”

Thank you to Jeremy for taking the time to answer questions!

This article is part of a series featuring outstanding artists in the community. Check out our last interview with Dana Howl here.