The Kharadron Overlords covet aether-gold.  A precious metal that they mine from veins in the sky but in game these allow units to use triumphs by expending their shares of aether-gold. I’ll be going over how using these triumphs boost your units’ potential and which ones are available to be used.

With 3rd edition came changes to triumphs, how and when armies can use them and which ones are available to choose from. Triumphs fall under Enhancements (27.3) and every army list gets one like any other enhancement, chosen as part of list building, with the player with less points fielded able to use their chosen one. These are one-use and can be incredibly useful. The 3 in the Core Rules are:

Bloodthirsty – After making a charge roll for a unit you have the ability to re-roll the charge roll (both dice). Great for combat armies and especially good if you’re bringing in multiple units from reserve that must arrive a certain distance away from enemies (often 9”). Also means you can use Forward to Victory, the order to re-roll a charge, as well as this to allow multiple units to re-roll charges if needed.

Inspired – Before attacking with a unit you can use this to give them +1 to all wound rolls until end of phase. Lasting for the entire phase means if you have a way to attack twice with a unit then it’ll benefit each time it attacks. +1 to wound rolls is a rare ability that most armies don’t have any other way of accessing so this is the most-often chosen triumph for reliable damage output when needed.

Indomitable – The chosen unit auto-passes battleshock after rolling. This is nice in that it allows you to try and pass your battleshock test first and then use if needed. Armies taking multiple large units with low bravery can make great use of this, allowing you to keep a command point free or being able to auto-pass with more than one unit if needed.

Kharadron Overlords are no different and also get one of the above as per normal. 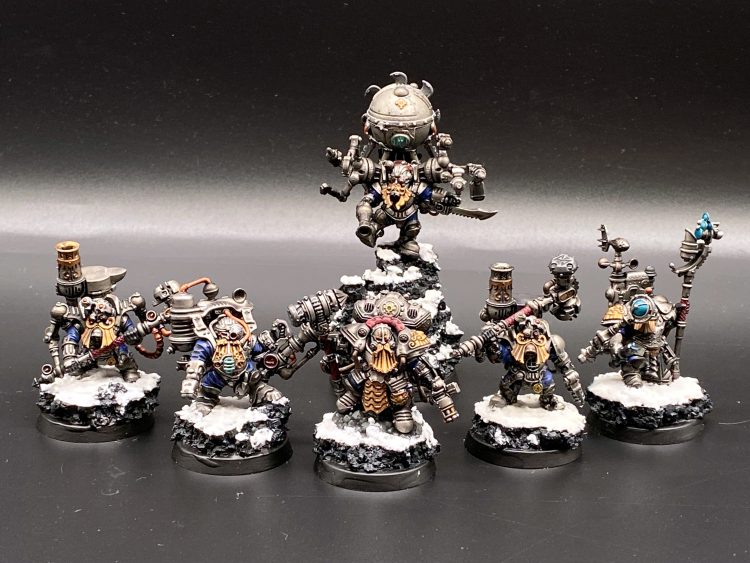 The main, and basically only, Battle Trait of the Kharadrons is ather-gold. Each Hero, Skyvessel, and unit starting as 10+ models gets 1 share of aether-gold which can be spent at any point during the game to trigger a triumph. Doing so means the unit no longer has the aether-gold and then suffers a -1 to Bravery for the rest of the battle; lower Bravery means virtually nothing for the ships or heroes though unless your opponent has abilities/spells that work based on it but will make Heroic Recover actions slightly harder. You can spend 1 share of aether-gold per phase so unfortunately you can’t just have every single unit have +1 to wound all at once, but that’s probably for the best.

Unfortunately with how units are bought now, Endrinriggers and Skywardens won’t get a share of aether-gold, arguably the units that you’d want to use Inspired on most (especially Barak-Zon Skywardens). There are a couple work-arounds though, Barak-Urbaz gives D3 units a share (or extra share) of aether-gold before the game starts and if you’re taking a custom skyport that’s also one of the Amendments you’re able to take (and probably the best one).

Now under the Core Rules for Enhancements the wording can seem immediately confusing, making it sound like you might have to choose all of your triumphs as part of list building and thankfully this is absolutely not the case. You still choose 1 triumph as part of the list building process like any other army but when you spend a share of aether-gold you can choose which triumph you need at that time.

The Core Rules triumphs are not the only ones available to Kharadrons. Broken Realms: Be’lakor introduced 3 sets of triumphs that are usable by Navigators, Endrinmasters, and Ather-Khemists. Each set gives 2 additional triumphs. These are used at different times depending on the ability, the most useful of which happen outside of the shooting and combat phases where you’re wanting to spend aether-gold already. These are also available to be seen in the newer Age of Sigmar app, so you don’t have to go out and buy the book for 1 page of rules!

Focused Aether-Sight – Before a Navigator attempts to unbind a spell that hero can spend their share of aether-gold to be able to re-roll the unbinding attempt. This is useful, however it’s terrible that it makes you choose to spend the aether-gold before you roll. It would be a lot better, and make a lot more sense as a once per game ability, to see if you failed the unbind first and then spend the share to re-roll.

Ride the Storm – Before using the Navigator’s Aetherstorm ability while garrisoned in a Skyvessel use this to add D6” to that ship’s move characteristic for the turn along with re-rolling run and charge rolls for the ship. This slightly combines the Aetherstorm and Ride the Winds ability of the Navigator, giving the ship he’s aboard a bit more maneuverability without needing to Fly High.

The Gaffer’s Motivation – Once per battle an Endrinmaster can use this to use his warscroll command ability without spending a command point while also adding +1 to the number of wounds healed by the unit of Endrinriggers that are affected by the ability, doubling the number of wounds healed. On a unit of 6 Endrinriggers will on average roll 4.5 successes (each rolling 1 dice, needing a 4+ with a re-roll) resulting in 5 or 6 wounds healed, on average, depending how that .5 swings. That’s a lot of wounds healed by just 6 models, considering an Endrinmaster will also heal D3 wounds (the Dirigible version you’ve actually taken healing flat 3 instead) you’ve likely got your half-dead Ironclad back up to full wounds, or close to it.

Blow the Magazine – When the Skyvessel that an Endrinmaster is garrisoned in dies, before rolling to see which models in the garrison are slain you can spend his share of aether-gold to make the ship blow up. When doing so you roll 1 dice: on a 1 nothing happens (boo), a 2-3 and each enemy within 3” suffers 1 mortal wound, a 4-5 and it’s D3 instead, and on a 6 it’s D6. This is nice if your ship is surrounded by enemies, especially when on or near and objective and a few wounds is enough to swing it back into your favour.

Large-calibre Augmentation – When an Aether-Khemist is garrisoned on a Skyvessel they can use their share to pick 1 missile weapon that that ship is armed with and re-roll wound rolls of 1 for attacks made with that weapon until the end of the phase. This isn’t just shooting phase though, which means you can use this when using Unleash Hell  or The Last Word Great Endrinwork which is cool.

Overcharged Aetheric Augmentation – This allows the Aether-Khemist to use their Aetheric Augmentation ability while garrisoning a ship and onto a unit that is garrisoning a ship while also extending the range to 18”. What’s nice is that if the Aether-Khemist has the Khemist Supremem command trait it can benefit from the extended range and use in/on garrisons on 2 units. It’s always bothered me that the army that’s based around dwarfs in ships mostly only work while not in ships, even though it’s only once per game it’s nice for added benefit. Since this is used in the Hero phase you can couple it with another aether-gold spend in the shooting phase for +1 to wound with the same unit. Getting Thunderers +1 to wound AND re-rolling wounds of 1 in the same turn is devastating. Just use it early so you’re not trying to use both this and the Gaffer’s Motivation in the same turn!

There are a lot of options and it can be easy to look at a few and thing what fantastic combos you can pull off in game but need to remember that you can only spend 1 share per phase across your army. Having a plan on where you want to be using your shares of aether-gold and where you want to save them instead will help ensure your army is firing at maximum capacity.