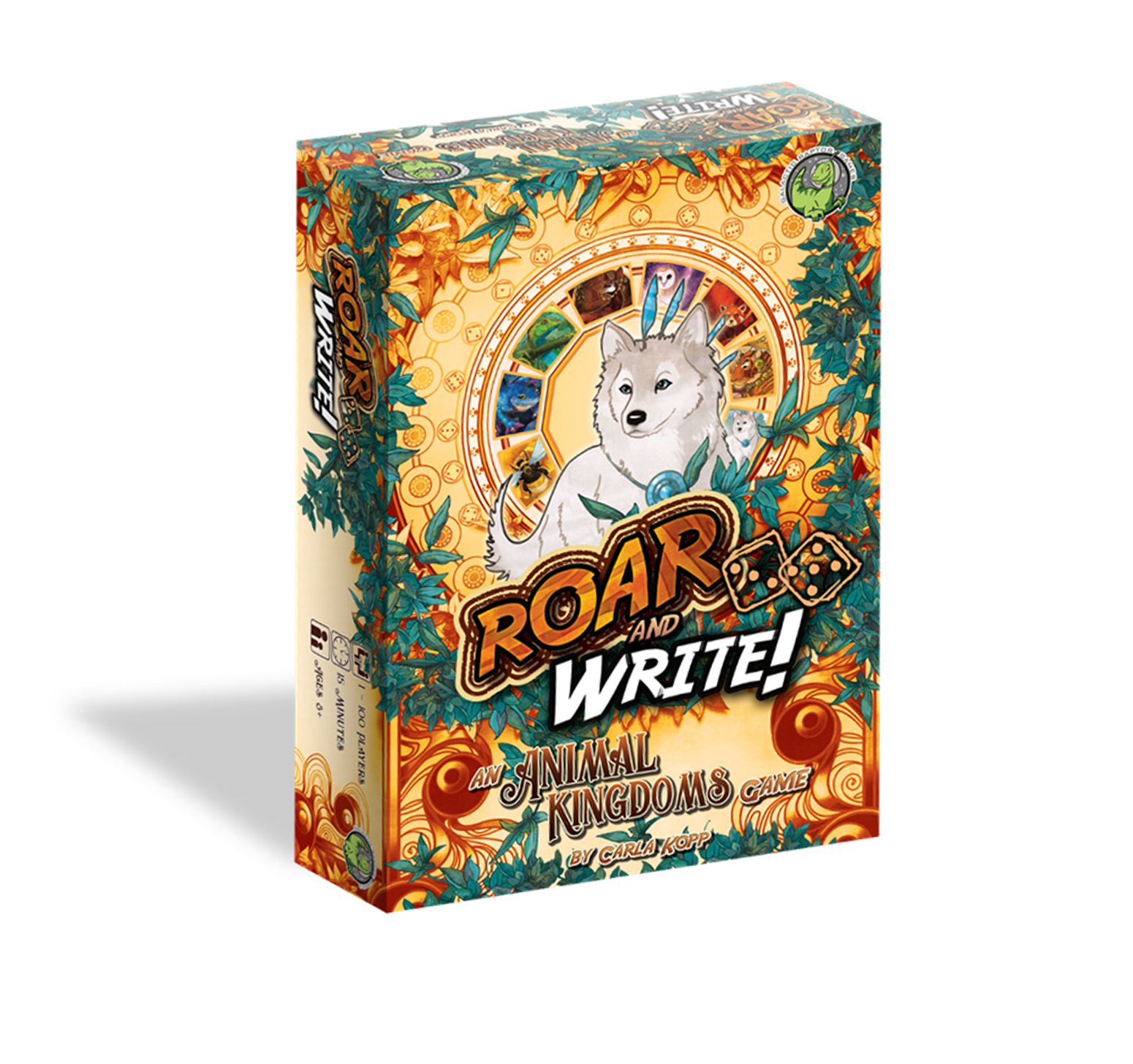 Roll and write games are having a bit of a moment. From Kennerspiel nomine Ganz Shön Clever to card-based darling Welcome To…, these simple (yet tactically deep) games have exploded in popularity over the last couple of years. While Yahtzee is a mass-market mainstay, the modern crop tends to layer additional mechanisms or tactical decisions onto the simple framework of pencils and dice. Roar & Write by designer Carla Kopp is one such game and launches on Kickstarter today. 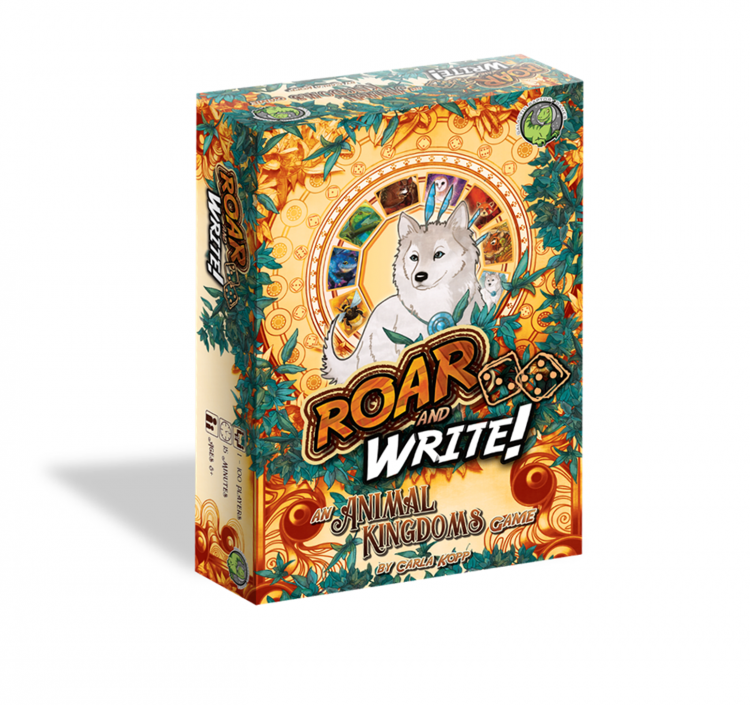 Carla’s design and publishing pedigree spans two publishing companies she owns as well as multiple years. Roar & Write is published by Galactic Raptor games and is a thematic followup to their 2019 release Animal Kingdoms. In both games players are attempting to gain control of the various kingdoms of the, well, animal kingdom. In Animal Kingdoms cards are played to fill the kingdoms with influence cubes and engage in the occasional battle. Roar & Write trades war for diplomacy; the goal is to impress the Selection Committee and be named Ruler in a much more peaceful process.

A game of Roll & Write is played over 5 rounds where you’ll roll a communal handful of 6 dice three times. After each roll you’ll scribble some, all, or none of the numbers shown onto your score pad to act as this round’s Council Offerings. Each Kingdom of animals has a Delegate on the Council who is looking for different things; Frogs are only interested in a specific number and want as many of them as possible whereas Arctic Wolves want sets of dice that add up to specific values. At the end of each round you’ll choose one council member to score that round’s selections. 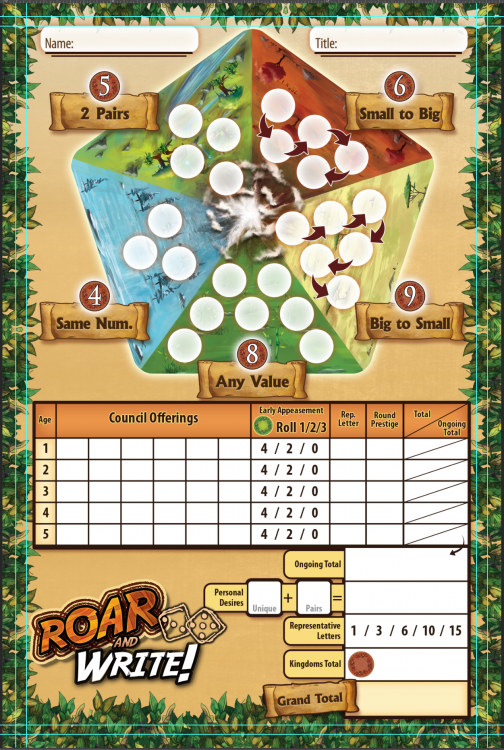 In addition to the delegate’s specific desires, the citizens of each Kingdom want to know what kind of ruler you’ll be. After each roll you can select 1 number that you did not write into your Council Offerings section and fill in one of the Kingdom Bubbles. The Kingdoms have different requirements. A simple one like selecting the same number 3 times over the whole game is only worth 4 points but the much more difficult task of selecting 6 through 1 in descending order will earn you 9 at the end of the game. Rolls often see you debating whether its worth taking a die as your offering vs filling it into a Kingdom space, especially late in the game. Kingdoms score all-or-nothing so if you’ve been diligently trying to fill one in the pressure ramps up. 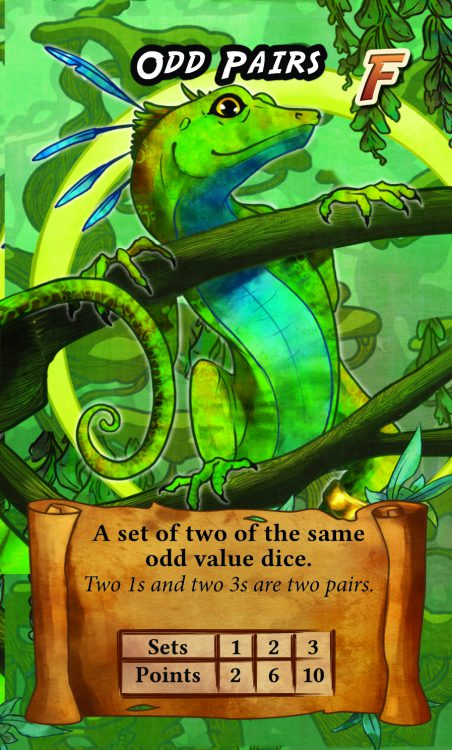 You’ll have to balance these desires against your personal agenda which is a private goal that rewards you for collecting certain numbers. While different for each player, these Agenda formats are identical. There will always be one number you’re hoping to collect lots of (e.g. scoring points for each 6 you’ve collected) and also a pair you’re hoping to collect (e.g. score points for each pair of 1&2).

Roar & Write’s tension comes from the way these set collection elements layer over each other and feed bonus scoring options. The sooner in each round that you select your 6 offerings, the more bonus points you score. However, if you select 6 offerings on the first roll you lose an opportunity to allocate a die to the Kingdoms. You can only score 1 Council member each round, however you’ll score bonus points based on how many of them you score throughout the game. Late in the game you’re pressured to focus on specific Council Members. The pressure to snag a few extra points or hold out for that last roll is good kind of pressure. 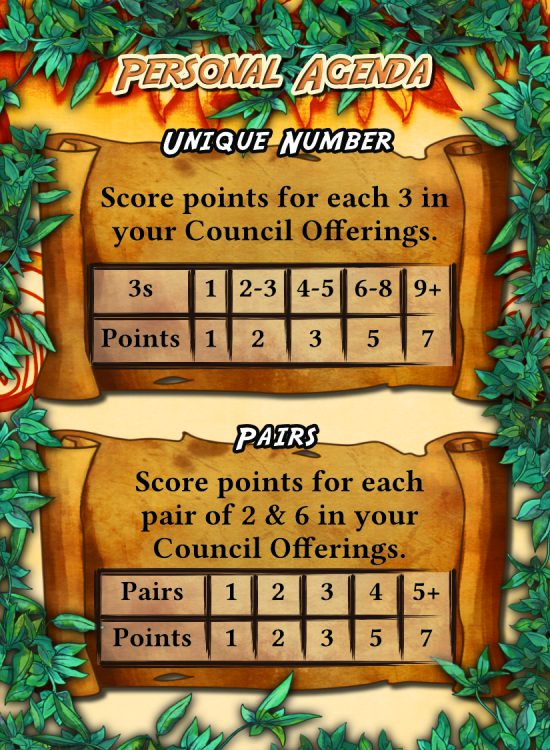 Because all players choose from the same communal roll, there is no limit to the number of players that Roar & Write supports. The catch, however, is in those player agendas. The more players around the table the more likely it is that someone’s Personal Agendas will reinforce 1 or more council members rather than compete with them. Every decision you make in Roar & Write must be evaluated against competing priorities which makes an alignment of Council Members with Personal Agendas disappointing. Suddenly some of the players are upstart candidates competing against the Establishment’s preferred candidate. This situation won’t rear its head every game, and even when it does show up it isn’t a huge deal. You can always compare your score against a personal high score or against the solo-mode missions and chart that awards titles.

At 10-15 minutes a game, Roar & Write is as satisfying as it is snappy. Every decision carries weight, the tension is real, but the stakes aren’t so high that anyone’s blood will boil. It’s the kind of game that works great to warm up or cool down game night, or to play while socializing. Hell, you could get a game in between the time you order appetizers and the time they show up if you’re the kind of gamer who carries some games to the bar.

Roar & Write is available on Kickstarter right now for a pledge value of $19. Galactic Raptor games provided the reviewer a prototype copy for review.