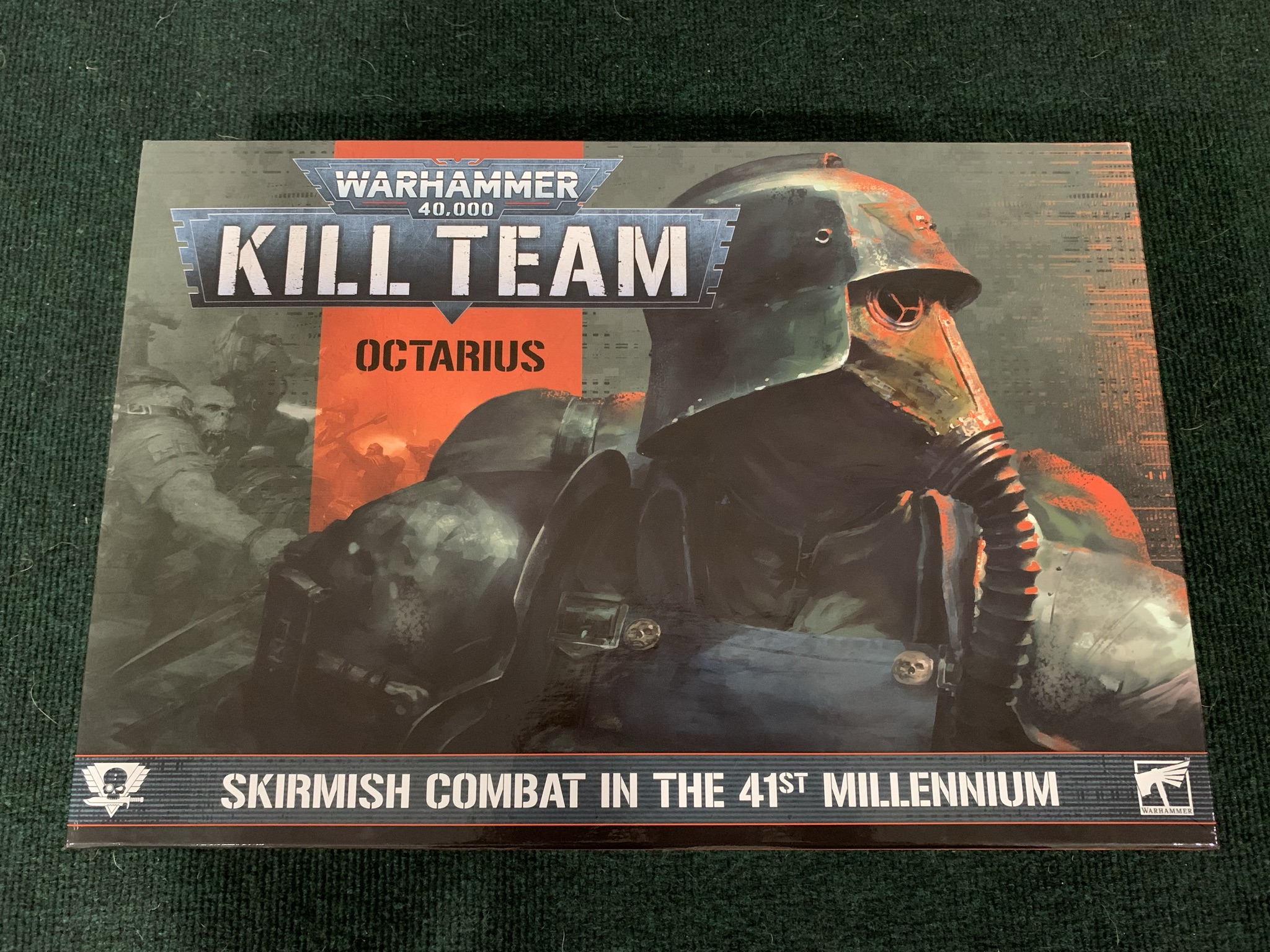 If you’ve spent any time at all on Warhammer Community or any hobby social media you’ll be well aware of the imminent release of Kill Team second edition. It was generally assumed that we would see an update to Kill Team though exactly what we’d get was unclear. Would it be simply an update of datasheets and points? Would there be an attempt to make the rules mirror 9th Edition similar to how 1.0 mirrored 8th?

Well, we here at Goonhammer have been sent a copy to look over in advance of release and we’re here to spill as many details as we can. Over the coming days and weeks we’ll give you everything from general impressions to the deep analytical dives you’ve come to expect. You can check out our initial review of the rules content here; in this article we’re unboxing this thing and taking a look at what’s inside. 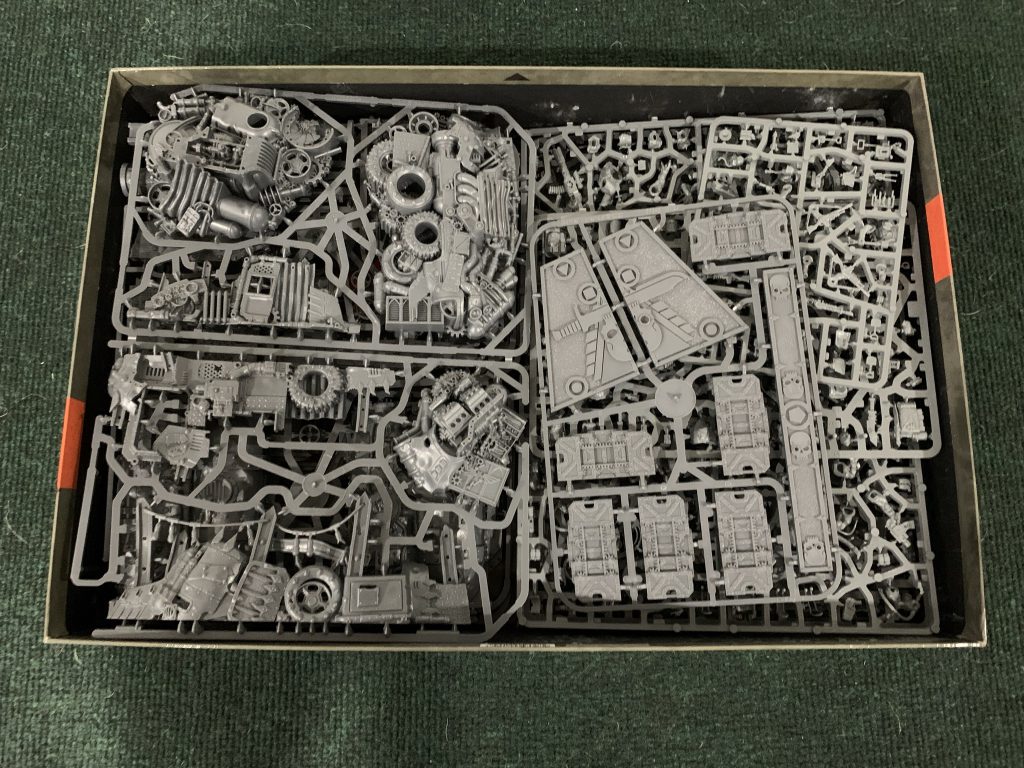 This box is enormous and heavy and comes packed full of models and terrain we’ve never seen before.The first thing you see when you lift the lid off the box is a massive pile of grey plastic. It’s absolutely packed, and with the exception of a few pieces of terrain we saw in Speed Freeks! the rest of what’s in here is new to this box. While it’s all great, the thing that jumped out to me first is the new measurement tools. If you haven’t seen the previews, Kill Team has introduced a symbol-based movement system; the tools here are marked out with the appropriate symbols to make this a little easier to get to grips with. You’ll notice the Kill Team logo straddling the two tools, which is a cute detail. 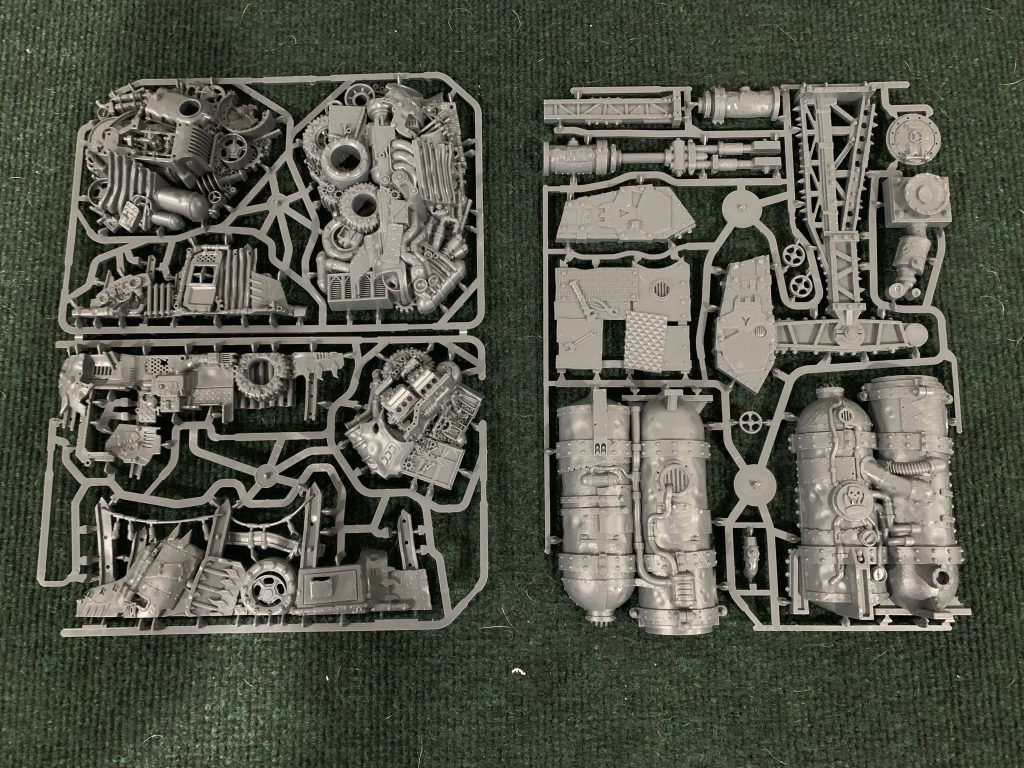 Terrain Sprue. There are more of these! Credit: Raf Cordero 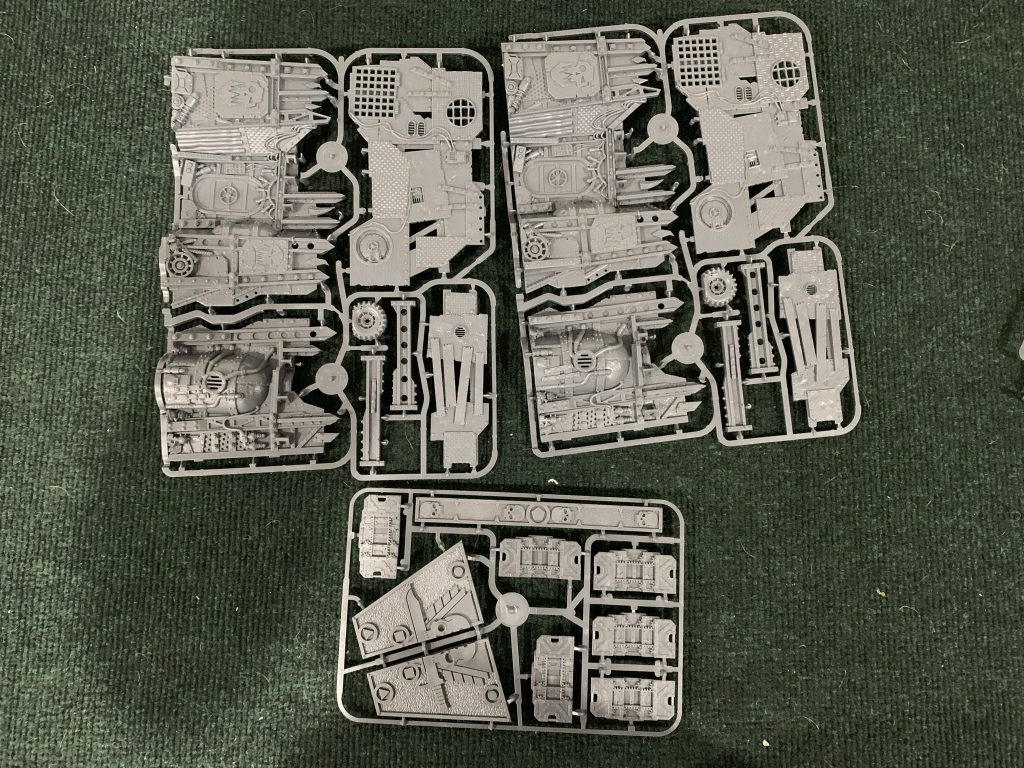 There’s one sprue with your measuring tools – a pair of circle/triangle/square tools, one for each player – and a 6″ Pentagon measuring stick. There are also 6 barricades on the sprue. These might not look like much but you’ll want to hold onto them; every mission format in Kill Team has players place 2-3 barricades before the game begins as a means of giving themselves extra cover before the game starts, so they’re pretty important.

The Ork city terrain is great, packed full of details and it’s really nice to see a new terrain set outside of the Imperium. I haven’t put paint to plastic yet but it looks like the kind of kit that will take a drybrush well enough to become table ready. My colleague Rob will talk more about the Ork terrain further down – we’re big fans of it.

The unit sprues are equally packed, and come complete with lots of options for customizability, which ties into the unique Kill Teams in the Octarius supplement in this book which we’ll look at in more detail later in the week. It looks as if the Ork arms are poseable and modular as well, so there’s opportunity to get creative. I’m personally most excited for the Death Korps and I know I’m not alone here. These are not “Easy to Build” or push-fit models in any way; like the previous Kill Team set these are full multipose units that I’m sure will see a future independent release.

For those of you who want to dig in and get building so you can hit the table…godspeed. Orks are deceptively complicated!

Rob: These are some of the most complicated sprues I’ve ever seen. There are a ton of options, including multiple heads for monopose models like the kommando Grot – one with snorkel and one with zipped balaclava. Fans of conversions and kitbashes are gonna have an absolute field day with these, but the downside is that it’ll take you an hour to clip and assemble three Orks.

Liam: Seriously, I built the Nob and the parts are spread over all three Ork sprues in no particular order. A+ for just having a ton of stuff, but a C for sprue layout. 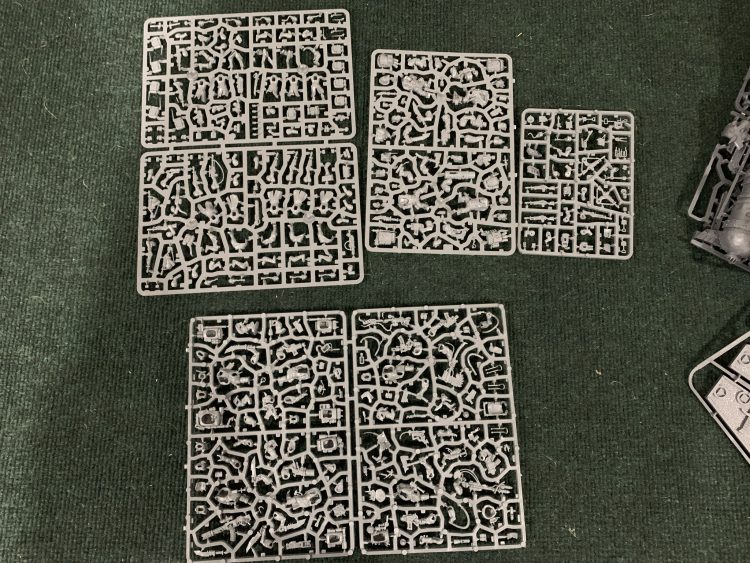 Of course there are bases (standard, not slot/peg), instructions, and everything you’d expect to need to get these squads in action. 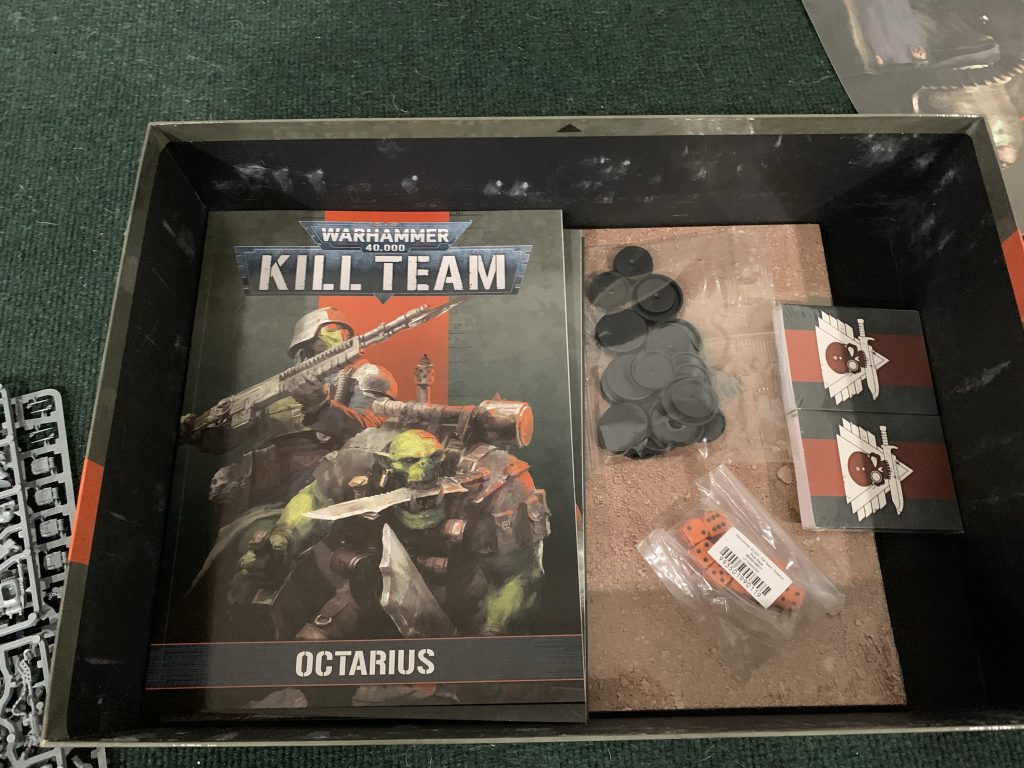 Under the art spread

Rob: Under the art insert is everything else you need to play. Books, tokens, dice, cards, and a Kill Team board that has become the de facto unit of table measurement in the Games Workshop ecosystem. The game comes with 10 orange dice patterned in the standard orange and black of Kill Team – though reversed from the original Kill Team starter set, and shaped like the classic GW battle dice with rounded corners, albeit made of slightly softer plastic. They feel good, but aren’t quite as good as the Kill Team 1.0 dice everyone loved and went nuts over. There are also two packs of cards – These are TacOps, the secondary objective cards you’ll play with in Matched Play. There are two identical sets to work with so a box will cover both players. In a nice touch that was missing in Kill Team 1.0’s Arena, there are three faction-specific “placeholder” cards. These allow you to keep faction-specific secondaries as part of your hand during the game (and reveal them accordingly) without giving away that you’ve taken a faction secondary. It’s a nice touch and I’m surprised it took them this long but I’m glad to see they’ve figured it out.

The board is a standard 22″x30″ Kill Team board, though unlike GW’s other boards, this one folds into quarters instead of 8ths, making it feel significantly sturdier and a bit less finnicky than the eightfold boards, though those have the advantage of giving you more guiding lines on the table to follow for objective placement. 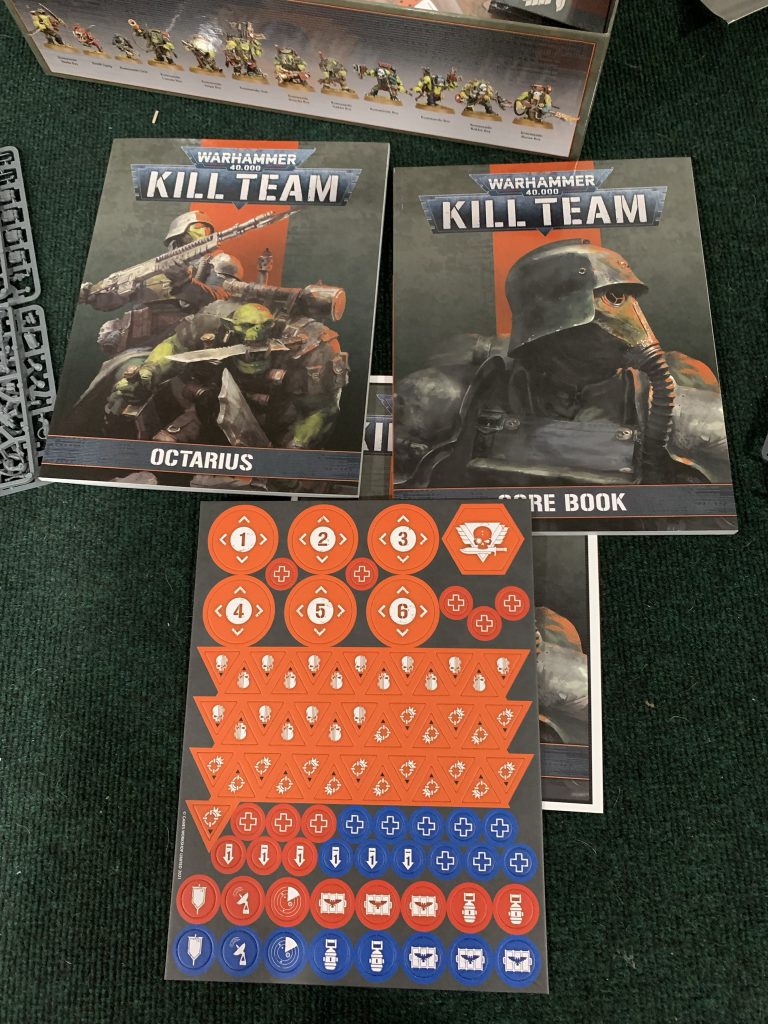 The Core Book includes all the core rules for Kill Team including missions and various modes of play – as mentioned, you can find our initial impressions of these here. Octarius is a full on campaign supplement that seems to be a sneak peek at the narrative release structure for this edition, and I hope we continue to get books and campaigns like this. Worth noting: the rules for the Death Korps and Ork specialists included in this book are not in the Compendium, so anyone running these squads is going to need to carry this book around for a bit. Kill Team 1.0 never satisfactorily worked out what it wanted to do with specialised Kill Teams – the Elucidian Starstriders and Gellerpox Infected kind of just arrived and then quietly disappeared – so hopefully these teams are indicative of an approach that might work in future.

Rob: The cardboard tokens are all pretty nice quality and the objective markers are particularly nice – they’re double-sided and gray on one side so you can flip them pretty easily mid-game to denote when an objective has been secured or affected by an action, which most of the missions in the Rulebook have you do. The only miss here is that there are no reference cards with the game’s generic actions. That would have been really nice to have outside of the rulebook. Otherwise, there are tokens here for a bunch of extra actions.

Rob: Let’s talk about the Octarius terrain.GW, you wonderful bastards, you’ve done it again (Edit: I was surprised to learn this morning that terrain wunderkind Ray Dranfield was not behind these and is instead now on AoS terrain full-time. To the new 40k terrain people: Great job). The Ork terrain in this box absolutely slaps. You get the two sprues of buildings, the oil derrick, and a sprue of the scattered debris that we first saw back in the Speed Freeks boxed game. The buildings themselves are great, and you get four corner structures to work with that have large upper platforms to put minis on. The stuff is wonderfully textured and you can take painting it as seriously as you like; it has lots of details that make it easy to drybrush, but if you want to go hard on it you can get right in there and pick out every little rivet and bulb to your heart’s content.

Edit: I had a patron ask me in our Discord if the terrain, assembled fits in the Kill Team box. Sadly, it does not – it’s a little too tall. You could fit everything in the box in the open box if you wanted, though. 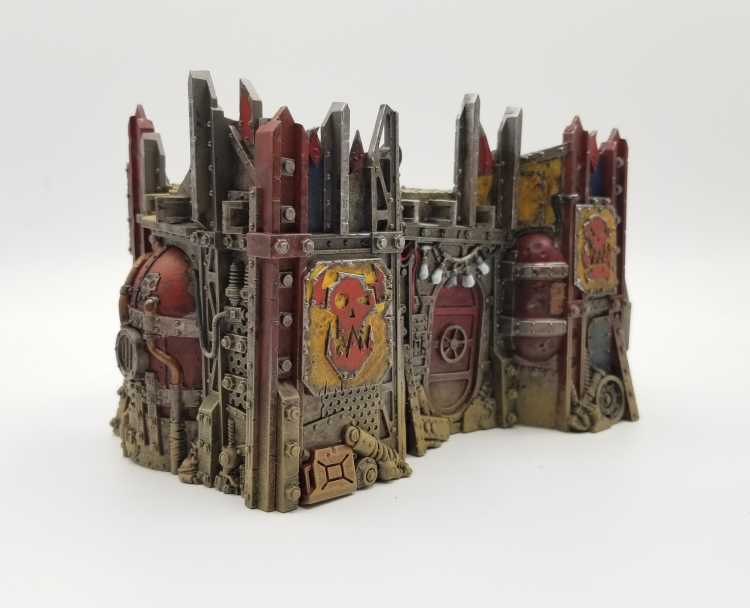 These paint up pretty quick and are real sturdy, with one exception – each one comes with a support beam to glue to the underside in the unstructured corner, and the way these attach is less than stellar – they often glue to a single thin girder on the underside of the roof, which means they’re liable to snap off on you. They also never really sat as flush with the ground as I’d have liked.

On the upside, the coolest part of the terrain is that you can put the corner structures together and make larger buildings. The campaign missions for Octarius take full advantage of this, having you do many different configurations of the terrain, including this half-building made from two of the corners. 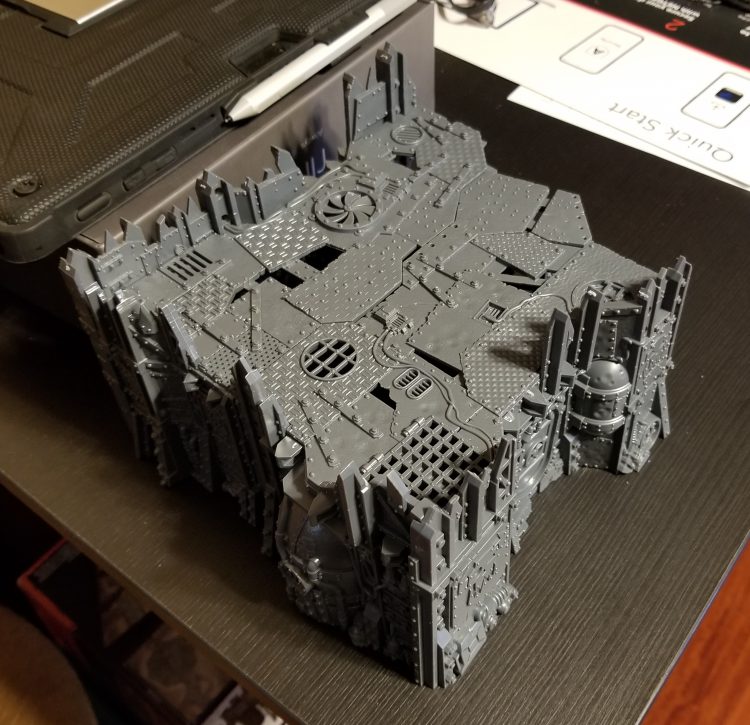 There are two identical sprues here, so you can repeat the process and Voltron all four corners together into one impressively large building, which makes an imposing Ork fortress for your minis. I can already picture people doing this and loading a second smaller Ork building on top of this to make a two-tiered fortress structure. If you do this, please email us a photo of it at contact@goonhammer.com cause it sounds rad as hell. The full building is large and cool as hell and I love how these fit together to make it seem organic, like a real building Orks would make instead of something that was only ever built so it could be ruined later for gameplay. To give you an idea of scale, here’s the full building with a half-painted Rubric Marine on top of it. 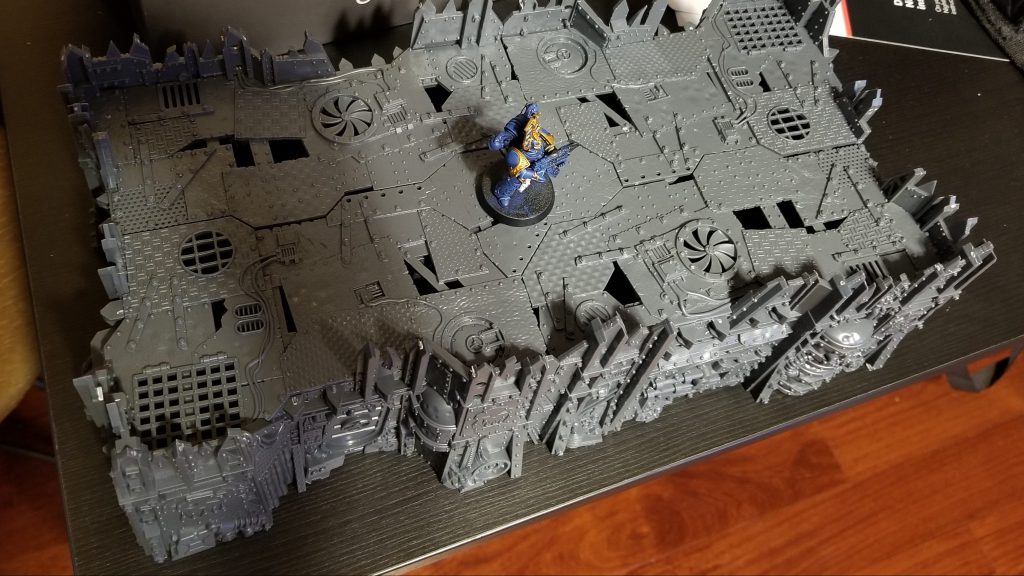 Kill Team has occasionally been a source of frustration or bafflement for us, but that isn’t the case here. This box has some of the most amazing models we’ve ever seen in the 40k universe, and they’re fully integrated into this game and what it’s trying to do. If you were on the fence about buying one, there’s a lot here to recommend; any even vaguely competitive price for this box will offer tons of value in terms of the plastic you get, both the units and the terrain. Even better, Kill Team itself – in its new, shiny, 2.0 form – is pretty great, too, and well worth your time to try out.