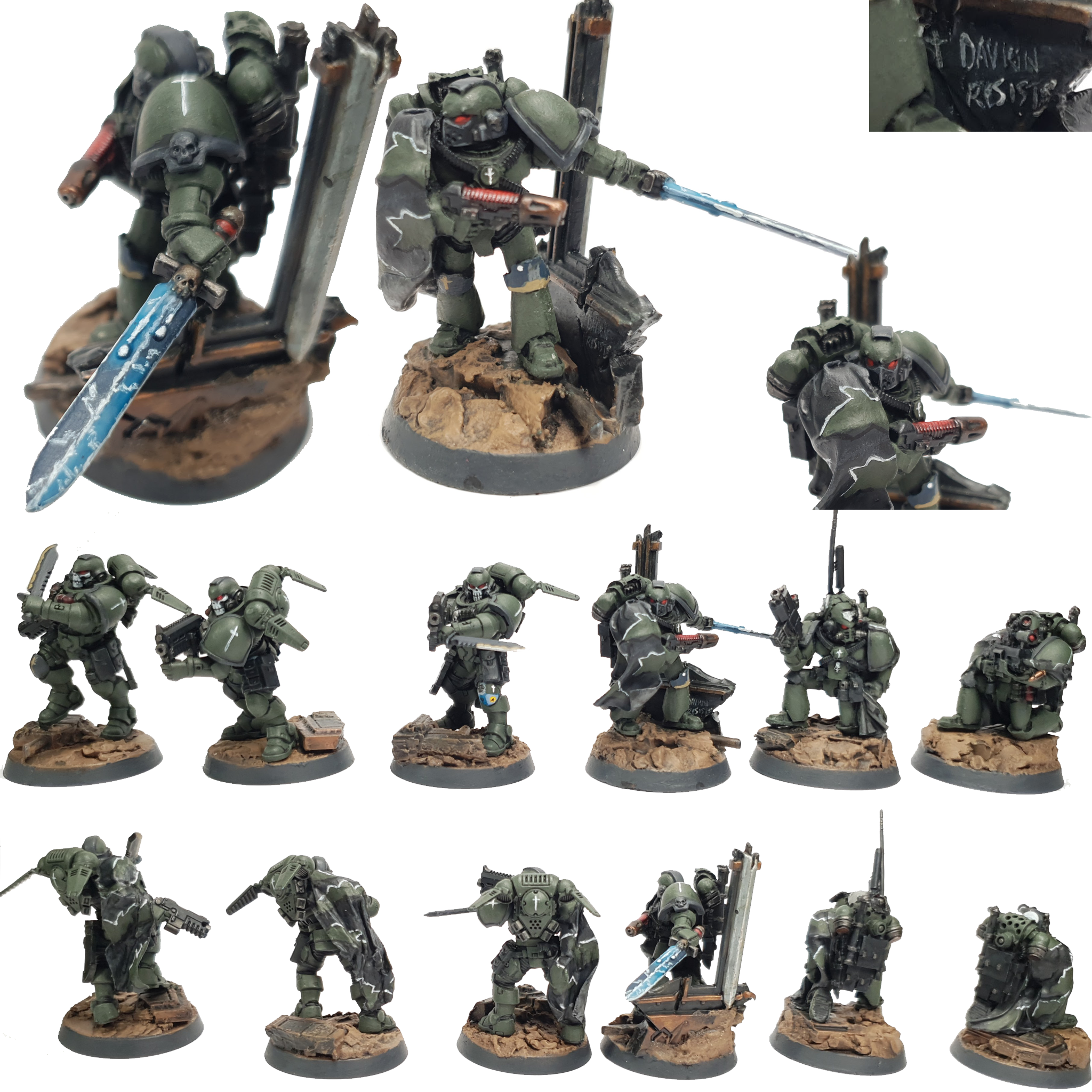 It is the 42 millennium.

The galaxy is ripped in two by war and the warp alike.

The Powers of Chaos have trapped the Davion Sector with a ruinstorm that few can navigate. The servants of the dark gods stand on the inches away from Triumph.

On the orders of Chapter Master Tiberius Rex and Inquisitor Scradden, the Imperial Davionic Republics of Loholt, Secondous, Primus, Cenoff, Tokage and Thaban where evacuated into a vast starfleet, making their way through the storm and escaping the Dark Imperium. While they do this, Heretic Astartes, traitors and worse roam the sector, attempting to destroy what resistance remains. The refugees, civilian, guard, knights and astartes of the sector gather their strength and await the right time to retake their homes.

For a small group of elite Astartes, the war to retake the sector has already begun.

This handful of Astartes represents the very tip of the spear and for the population that did not escape on the fleet, the first line of defense. Equipped with the finest of Cenoff Forgeworld technology and trained in the latest techniques of covert warfare, they strike swiftly, silently and invisibly…..

With that out of the way, here are my kill team dudes.

Backing Agravian is his 2iC. Berlak, a dour Reiver Sergeant (Combat. i.e the guy pretending to be MGS Snake) and his two squadmates Lac, who is renowned for being overly impulsive (the one with the pistol) and Cador, the team’s breacher (the one rifle).

I tried to work a bit of Agravain’s background into the mini, on his kneepad he has a mural celebrating his toppeling of the strong point on Axland Prime without firing a shot in anger. An act that drew the attention of 1st Company’s Sub-Captain. 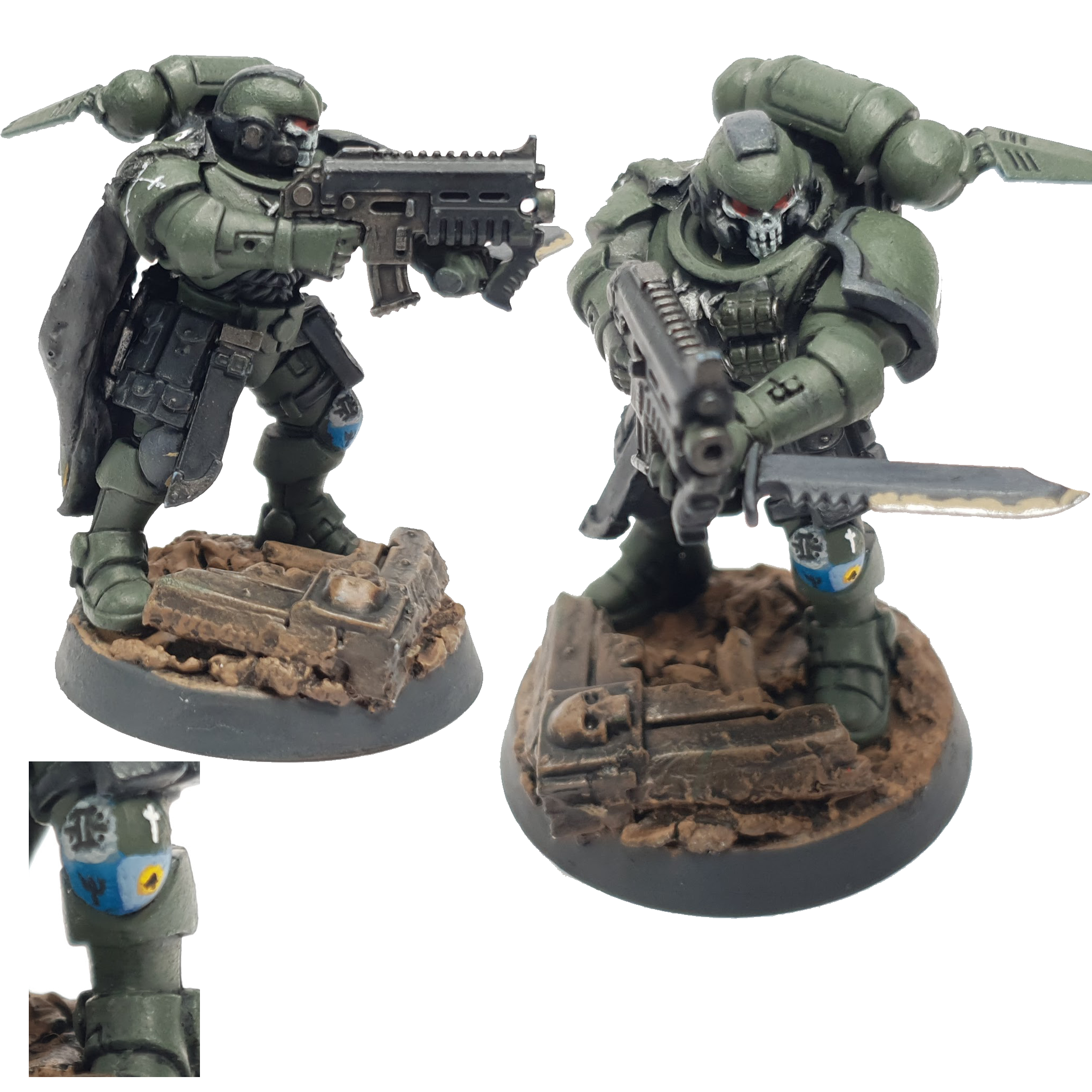 Likewise Berlak has a similar knee pad marking him out as a winner of blood games between 4 chapters. I did this as a bit of a tribute to some awesome 40k peeps that genuinely inspire me to make cool stuff. So he has Knotley’s Deathwatch Keep, Aaron Dembski Bowden rep’ed by the Emperor’s Spears and my mate Chad’s Space Wolves. 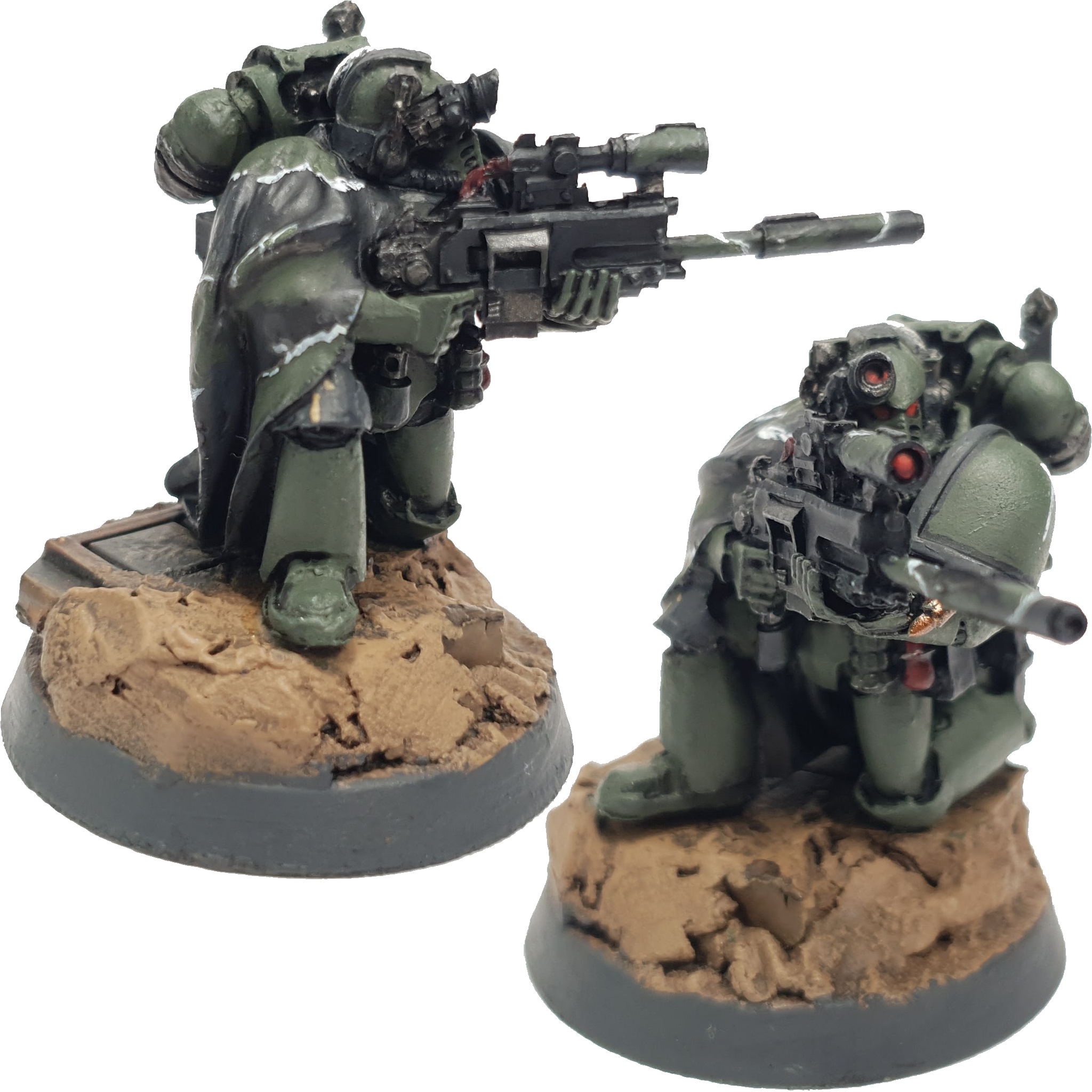 I did a few things to differ them from my 40k army, namely changing the shoulder trim from white to black and making sure each member had a cloak/lots of gear. I also used a different combo colour on the right kneepad. The minis I used to make this squad are the forgeworld mkiv recon kit, a KT Reivers box and a scattering of parts bitz box. I used this tutorial for the Reiver’s cloaks.

The other challenge I had was mixing primus with mainline marines and not having them seem smoll in comparison. While I haven’t found mixing marine sizes to be a problem in my main 40k army but somehow it didn’t seem ‘right’ in KT. I Tried to get around it by using sector imperialis parts and spakfilla on the bases. Smoll marines got a bit of a height boost by sitting on top of the SI parts/filler while I pushed the reivers down to the plastic if that makes any sense.

Background wise, the Swords of Davion Astartes are (somewhat wrongly) renowned for being reckless close combat fighters that favour jump packs and epic sword fights over things like ‘tactics’ and ‘other imperial force’s casualty rates’.

Swords of Davion kill teams are made of the more tactical sound and generally sensible members of the chapter. I.E the ones that don’t in the middle of battle say “By the Emperor that gentleman has an impressive Hat/Sword (or combination of the two), I think I should challenge them to a fair duel. It will be glorious and it totally won’t ruin our battle plan at all.”

1st Company’s off the books demi company therefore offers an alternative way for the non glory hound close combat experts to be noticed and picked out to be picked out for leadership or inducted to the 1st company proper. They operate as sabuators, assassins, scouts, insurgent leaders, retrieval specialists, respond to Inquisitorial calls for ‘help’ and terror squads.

The exception for preference for level headed marines making up the KT’s are the Reivers.

As previously mentioned, the chapter has ongoing problem with combat lust/glory duels. In recent times, this is normally harnessed and then beat out of recruits during their time in the assault squads, hopefully instilling the marines with a sense of brotherhood over self. With the incoming primus contingent this posed a problem as they don’t really have  a unit that fits the standard assault squad role.

So canny company leaders and sargents watch the primus contingent, picking off the overly tacticool glory/sword obsessed types to operate as terror squads/muscle for the kill teams, once again with the view of the experience drilling the need for tactics/welfare of the team over personal glory into them. I tried to show this with the Reiver’s tactical weeb knives and general ‘trying to hard’ poses.

Anyway, I hope you enjoyed this overly long spill about my squad of dudes.

Have a good one,

Kill Team or is he? Space Marines Swords Of Davion