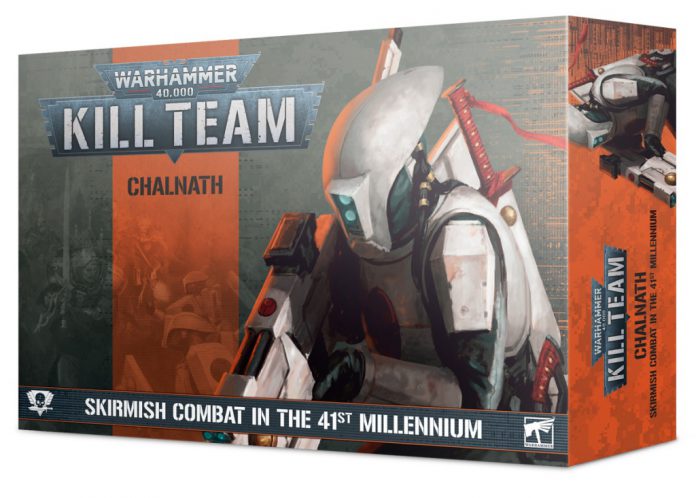 This past weekend we talked about the box contents and new kill team rules in Kill Team Chalnath, showcasing the exciting new Sororitas Novitates and Pathfinders kill teams. Today we’re looking at the other, less-heralded rules in the box: The Spec Ops campaign rules for Chalnath.

Octarius introduced us to an entirely new way to play Kill Team, with Narrative Play rules for Spec Ops camapigns. A far cry from the weak campaign rules of KT17, these new rules give each player a base of operations to upgrade and protect, as well as experience, operative upgrades, and an armory of rare equipment to outfit their team with before each engagement.

In addition to Spec Ops rules for each team, Chalnath also gives us rules for a Spec Ops campaign similar to Octarius, with new missions, Killzone/terrain rules, and rules for each of the two teams involved. Unlike Crusade campaigns, which tend to bring additional relics and mechanics to the table that are specific to the warzone setting, Chalnath is faction-agnostic; there are missions and terrain rules here but the upgrades your team will pick up are still specific to the team itself.

The big thing Chalnath adds to its killzone are rules for the Sector Imperalis ruins included in the box. There are rules for doors and hatches – you can move through these without any impediment, and the ruins have the Scalable trait that was recently added to the core rules via the Kill Team FAQs. The upper floors of these ruins have the new Punishing Vanishing Point trait, which are vantage points that can give you cover and give you additional bonuses for shooting down on targets – you can retain one attack dice as a successful normal hit before rolling.

There are nine missions in the Chalnath Shadow Operations set. These are pretty standard – similar to the Octarius missions they use/recommend a specific terrain layout using the box terrain, and they generally pretty good at matching the mood of what they seem to be going for. Several of these have bonus rewards depending on whether you’re currently undertaking a specific Spec Op; Secure the Relics sees both teams racing to grab and secure a number of sacred relics (objective markers) on the table. The attacker is trying to keep them out of the defender’s DZ while the defender is trying to put them in there, and every relic can be picked up and moved. Win the mission as the Defender and if you’re undergoing the Recover Archaeotech or Extraction Spec Ops and you can reduce the number of games needed to complete the Spec Op by 1.

My favorite of these is probably Launch Strike, which sees teams competing to upload the launch codes to missile stored in an underground bunker, hoping to launch them at their enemies. As a mission the hook is more interesting to me than the execution; it’s fine, but I’ll likely want to do something more interesting with the terrain layout and tie it into a larger 40k campaign, using it to allow the winner to get a free firestorm attack before a game. It’s a great fit for Planetstrike and Stronghold Assault campaigns/missions.

The rest have some interesting hooks but are hit-and-miss. Escort Mission sees one team escorting a VIP through enemy territory, but the VIP is represented by an objective marker, meaning it has to be picked up and carried each turn. That’s… OK, but it feels like an area where you’d really want to get an extra model to represent an imperial dignitary or ethereal or whatever here, and have more interesting rules for it. Destroy Foundations is also an interesting premise, but again while planting demolitions around the board is an interesting concept, as a mission it’s going to do its best narrative work when you can connect it to something else, since otherwise it’s just running around doing actions. Still, the actions themselves are evocative and there are some solid narrative hooks here for GMs who want to incorporate this into something more narratively-focused.

For the less narratively-inclined, the missions are also fine. They offer some good variation from the standard rulebook ones, and they’re varied enough that you won’t get tired of them on the first playthrough.

We touched on these briefly in the team review – Pathfinder Kill Teams get six new specialisms that can replace the standard Battle Honours with something more thematically appropriate. Cunning Hunter lets you retain an attack dice as a hit before rolling if you haven’t moved, Martial Philosopher lets you pick which Art of War ability you want to be active for the operative, regardless of what your Shas’Ui called, and Capable Under Fire lets an operative stay concealed in light cover even when an enemy has a higher vantage point – they can’t ignore the cover.

Pathfinder Teams get an assortment of Rare Equipment to play with, and you’ve got some interesting options here. Honour Blade is going to give you an extremely cool modeling opportunity, and lets you swap out the knife on a Shas’Ui for a blade with +1 WS and +1 damage. The Shield Generator gives its operative a 4+ invulnerable save, and Experimental Pulse Ammunition gives your pulse weapon +1 attack and P1. There’s also a new grenade that’s super helpful for the Pathfinder strategy: The Markerlight Grenade, which can drop markerlights on multiple enemy targets at the same time. And for drones you have the Advanced Cogitation Chip, which lets a drone ignore the first three AI rules, e.g. drawbacks.

There are three Strategic Assets for Pathfinder Kill Teams:

All of these are great, and they really speak to some cool conversions you can do. In particular, I really, really want to see some kind of “home base defense” mechanic in Kill Team in the future to make it worth modeling a bunch of sick kill team bases.

Pathfinder teams get their own Requisitions for Spec Ops campaigns. Repair Damaged Drones is your ticket to bring back dead drone operatives, and prevents you from losing drones at the end of battles. Exemplar of the Greater Good rewards you with bonus XP for an operative who has taken on their second battle scar. And Shas’Vre upgrades a Revered Operative so that whenever your Shas’Ui declares a Mont’ka or Kauyon, the effect stays active for your Shas’Vre until the end of the battle.

There are two Spec Ops for Pathfinder teams. Completing either gives you 1 RP, 5 bonus XP, and a piece of rare Equipment. 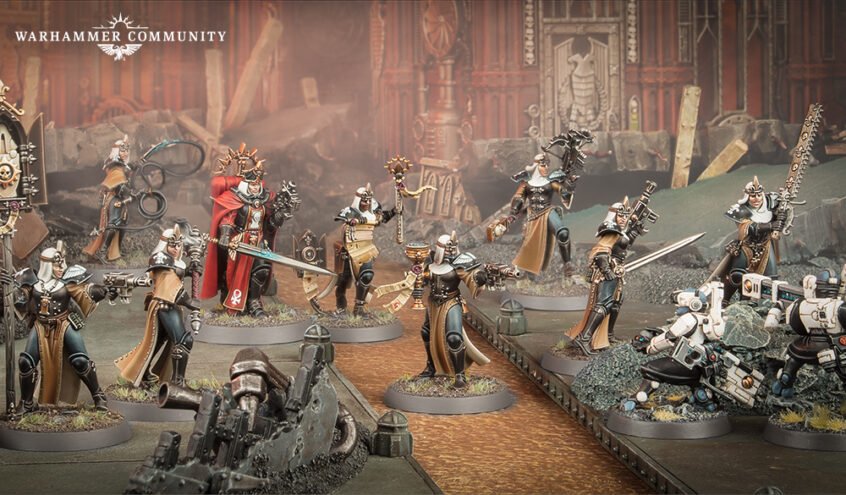 Novitates Kill Teams come with their own sweet set of rules, starting with six new specialisms to replace other Battle Honours. Devout gives one operative the ability to pray for guidance once per battle, spending 1 AP to gain 1 CP. Pious gives you back Faith points on a D6 roll of 5+ each time your operative performs one or more Acts of Faith during an activation. Righteous Purpose just makes your operative immune to critical damage, allowing them to have any criticals inflict normal damage. And Quick of Thought and Action gives your operative a free Dash action at the start of each turn if they aren’t already in Engagement Range of an enemy operative. These are uh, pretty damn powerful and give you a strong incentive to get some of them as quickly as possible.

The Rare Equipment is also solid, with six items to choose from. Blessed Blade pulls the same trick Honour Blade does, improving your WS by 1 but only upping your Critical damage by 1. If you want to really start some fires, Inferno Rounds upgrade an autogun or autopistol and give it the Inferno 1 critical hit rule. And Relic Gunsight upgrades an autogun, improving its BS by 1 and giving the operative the Take Aim action (1 AP), which lets them treat a visible enemy operative as having the Engage order for that attack, a solid combination with Inferno Rounds if you want a Sniper who can quite literally light people up.

Again these are all really sweet and make me wish there were more of a reason to model your base.

Novitates are unique in that they give you a bonus for dying. Blessed Martyrdom (1 RP) is used after a game where you had one or more Novitates fail their casualty tests. For each death, you can give a surviving operative 1 XP. This is pretty great for making the best of a bad situation and getting someone over the edge to their next advancement. Field Punishment on the other hand is used for when your operatives just utterly fail you – used when an operative is incapacitated and doesn’t perform any mission actions, you can remove it from your team and replace it with a Novitate Penitent with the same scars/honours/experience. Then you can presumably have your superior whip the shit out of her every game until she atones for her failure. Finally there’s Saint Potentia, used to upgrade a novitate who gains the Revered rank. You only get one Saint Potentia at a time, and while she’s on the table you gain 1 extra faith point per turn. Then if she dies and you also have a Sanctum, you get 1 Relic for it. Which is a cool way to have the game model that you kept her skull/finger/rib/whatever around as a creepy object of worship. I love rules like this.

Finally there are the Spec ops for Novitates. There are two of these, with different conditions and rewards.

This is basically what we’ve come to expect from Octarius and the White Dwarf team updates for the new Kill Team – and that’s a good thing. There’s a lot here, and like with Crusade, the emphasis is more on crafting your team’s own personal journey rather than telling a larger narrative, though there are some hooks and interesting campaign things you can do here if you want to get creative. The Strategic Assets remain my favorite part of the rules just because of what they encourage you to do modeling-wise, but I’m waiting on Kill Team to give us a reason to actually make those bases for fighting over in a game.

The teams themselves are great, though Novitates certainly feel like they’re more unique than Pathfinder teams, and have slightly better rules to compensate. I like what Pathfinders have, but nothing in their rules is as cool as the insanely cool requisitions sisters get.