Kill Team Commanders – A Hit and a Miss

So I’ve now read Kill Team Commanders cover to cover and had a good look at the scenarios.

Commanders adds 41 more units to Kill Team for new commanders format games. There are 15 scenarios (3 open play, 6 campaign and 6 matched play) and the matched play games are all built around 200 point teams. 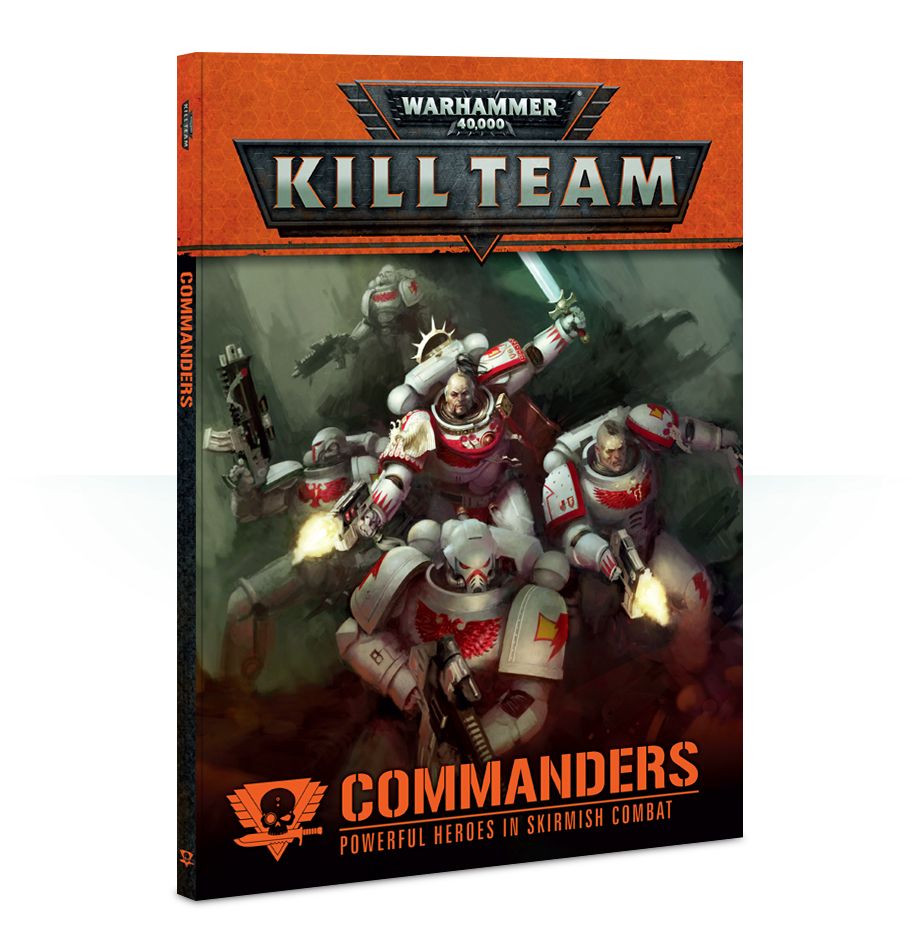 So what does it let you do? The supplement adds 6 new psychic powers, plus several sets of race specific psychic powers (Warlocks and Farseers both get access to three different powers each) and commanders range in points between 10 and 198 points.

For Astartes players you get access to four characters including a librarian who opens up the psychic phase for you. The cheapest character is the Lieutenant at 46 points, with the option to equip with master crafted bolter (assault or stalker) for damage 2 shooting (with the stalker at -2 AP Heavy 1 Damage 2) and power sword and standard bolt pistol.

And this is where we start to come to where I feel the supplement is lacking. Options. Recently a Space Wolf Primaris Battle Leader was released with a power axe, and you can’t take the furry wotsit as equipped. The equipment lists are very much the options from the kits and nothing else. I feel this is a weakness that discourages hobbyists from converting, because giving characters different guns or close combat weapons is a fairly easy conversion.

By contract the forces of Chaos can tool a champion up in a variety of ways with a greater variation in close combat weapons.

I’m well aware that Kill Team is an intro product very much aimed at the younger players. Almost every older player like me has a stack of Space Marines a foot thick and with a bit of converting and slicing can have a Lieutenant with lightning claw and combi weapon or whatever.

However Kill Team is pitched at younger players who’s house doesn’t have a geological layer of sprue somewhere full of bitz to customise every model. Kill Team is pitched so a kid can pick up a Kill Team starter set (I really think that GW should have put together a quick play Kill Team rules fold out to put in those sets so it is genuinely a case of buy one and you do have everything you need to start) and when they fancy adding a commander pick up the commander for that faction.

Having played Kill Team a decent amount now I’m going to homebrew up some amended equipment lists to allow more customising, add a squatmarine lieutenant and try it out in narrative play. Shotguns swapped for lasguns with guard using the stats from genestealer cult is a no brainer, so converting the Chaos Champion to marines is a similar swap.

There have been a number of complaints online from people who haven’t read the supplement, because nerds like whining about things and airing their feelings of entitlement.

Commanders, like Rogue Trader, is an entirely optional supplement which adds more content to the game. So of course people will complain about it. People will make exactly the same complaints about Kill Team: Inquisitor in 5/6 months time. You can’t get sucked into online negativity and let it seep into real life.

I don’t believe it will cause competitive events to shift to a 200 point limit and allow commanders, because some factions have very expensive commanders, and some have dirt cheap commanders. I think possibly the most points efficient commander is going to be a 10 point commissar with bolt pistol and the strategist specialism, sitting there at the back generating an extra command point a turn. And while the tooled up enemy commander has to chew their way across the battlefield, they have to face all the points the guard player saved by taking a super cheap commander in extra guns pointing their way. Competitive events won’t be able to keep to time if half the Kill Teams are 185 points of Guard Kill Team goodies plus 15 point Commissars.

People have whined about how commanders are unkillable titans. The answer to that is that they aren’t. Everything goes down eventually, especially to fusion pistols, melta weapons, transuranic arqebuses, power fists and claws and plague flails, but commanders will likely last a couple of rounds. If your opponent outplays you with his broodlord or whatever and picks your guys off one or two at a time like the Predator, then that’s on you.

If you have a tough character they are almost certainly clocking in at over 100 points. And I’d take a hundred points of deathguard or deathwatch or harlequins against any commander in the book.

What you get is new scenarios and options to play, and it will help spice up a campaign with more variety.

It’s a good expansion to standard Kill Team, especially for the younger players without huge collections that Kill Team is aimed at.

The character boxes I think will have fairly erratic sales, because a number of them are characters players already have in huge numbers, like the Adeptus Mechanicus Magos Dominus, where every Admech player has at least three already.

Here is where we get to more of the miss.

I think the sales model for it was misjudged. The characters which retail at £12 being priced at £20 are not going to sell well given the only exclusive content for the box is 2-3 unique cards and everything else is card versions of the tactics in the book, and the psychic powers for that faction in the book if the have them. In particular some of the character choices aren’t great (looking at you Acolyte Iconward, though until the Aberrant comes out there’s no other GSC character kit that you could have) and having a £12.50 commissar that you get in pretty much every Imperial Guard boxed set going cost £20 and come with two exclusive tactics and an exclusive commissar skill tree is a bit much.

I strongly feel there should have been two tiers to the Commander pricing in the same way that there is to the KT faction boxes, one tier at £20 with things like the Librarian, Broodlord and Magos Dominus (or better yet the Enginseer in the lower tier as people don’t already have squads of the things) and one tier at £15 with the Commissar, Fireblade and the other lower priced kits.

So for me the launch is a bit hit and miss. For the factions I plan on dipping into for Kill Team, like Deathwatch and Harlequins, then the character boxes are fine as I don’t own several of the characters already, but for factions like Adeptus Mechanicus where I already have two Magos, I’ll likely not pick up any more.

As a whole the box has plenty of good points, gives you new variety to add to games and new ways to play. It lacks customisability in places, could do with the addition of squatmarine characters as an option and needed a more aggressively priced set of expansion boxes.

Kill Team Commanders isn’t a compulsory purchase for Kill Team players, but I think that it adds enough to the game to be a worthwhile buy. The individual boxes are a matter of personal taste, and I’ll feel much better picking up a Librarian or Broodlord than a Fireblade or Commissar.

What I would like to see if new releases leading to some additional commander sheets becoming available, such as Aberrants for Genestealer Cults, or the new Rogue Trader model in Blackstone Fortress or Cult Eastwood when the Genestealer Cult codex comes out in the new year. Kill Team is a product meant to drive sales of 40K models, and I feel things like putting the Aberrant up as a datasheet to download when it becomes available as a separate clampack will further drive sales. I enjoy Kill Team and I want to see it continue to grow and evolve.

Thundercloud is the brains behind the Too Many Metal Men youtube channel.