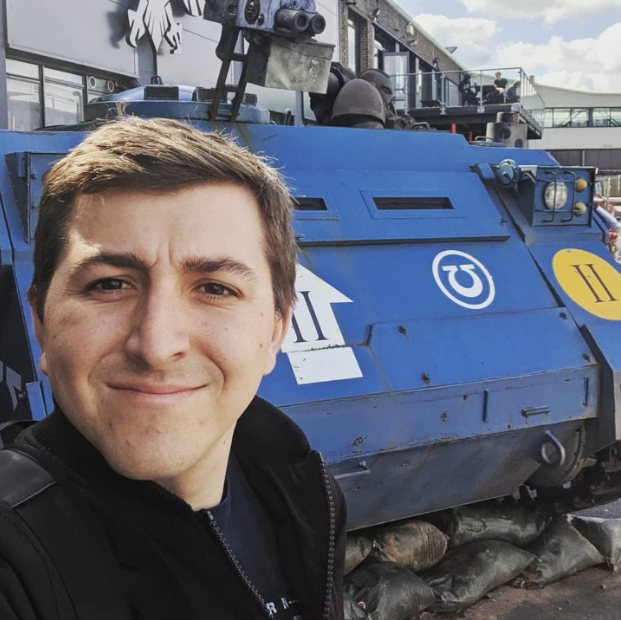 Potentially lost in the shuffle of excitement around the 40k Championships at LVO is the major Kill Team Tournament that also ran at the event. We asked Jacob Cordero, who piloted his Grey Knights to a 5th-place finish overall in the Kill Team Tournament with a 4-1 record (knocking out Goonhammer author Novembermike on the way), to write about his experiences at the event.

Coming into LVO, I did not expect to make top eight at all (my original flight left Sunday morning before I moved it!). I’m super happy with how my Grey Knights performed, and had a lot of really enjoyably difficult games with friendly opponents.

At the SoCal Open, I did fairly well with my Grey Knights (2-2 both days iirc), but couldn’t keep up at the higher tables due to a combination of bad secondaries, not a lot of LoS blocking terrain, and my low model count for holding objectives. The limited secondary selection per mission meant that sometimes I was stuck having to pick positional objectives (eg: have a model in each quadrant of the board, within an inch of three board edges, etc.). With a low model count (max 6), it’s hard to hold more objectives and get them into position around the board, and losing one or two models is devastating.

The “kill one/kill more” primary in the LVO packet definitely made a huge difference for me. Between my two psybolts, a high volume of storm bolter fire, and nemesis force weapons, I’m pretty likely to get at least one kill every round. Additionally, having all the secondaries available every mission was a huge boon, since I could pick the ones that were more reliably achievable with six models (eg: not Engage on all Fronts). Most games at LVO, I took Relic Hunters, Thin their Ranks, and Hip Shot, with Relic Hunters being my most consistently completed secondary, and Hip Shot being the least reliable. 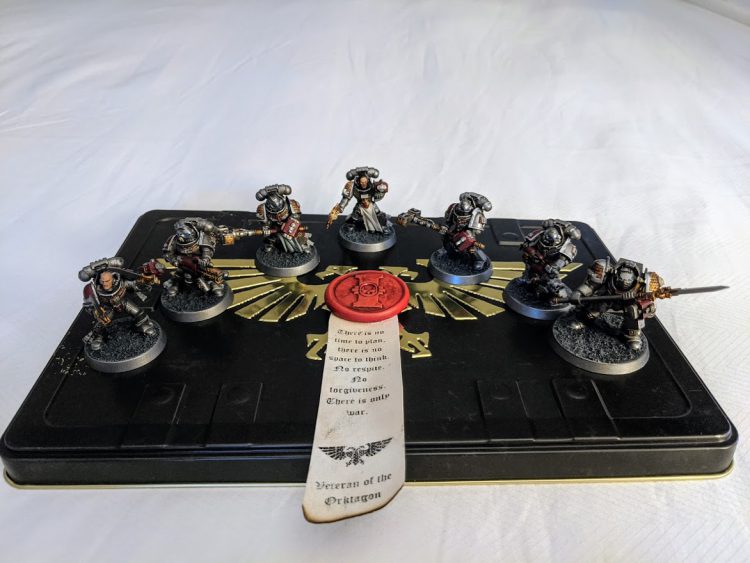 With Grey Knights there aren’t a ton of different options for the list. At 125 points, you’re typically either bringing 6 regular GKs or 4 and a Terminator. In SoCal and during practice games, I’ve typically done a Justicar Hammer Leader. However, I’ve found that forces me to play a lot more aggressively with my leader than I’d like, and consequently lose him too early. The week before LVO, I tried out bringing a Warding Stave leader instead (for the more defensive 5+ invulnerable save), and putting the second hammer on the Zealot (since I still like having two hammers). At my local store’s Kill Team night, I was able to beat James’ Astra Militarum and another top local player’s Daemons, and felt pretty good about the swap, so that’s what I stuck with for LVO.

So I had lots of options, but didn’t end up using them. Instead I picked the same six models for all of my games:

Afterwards, another Grey Knights player asked me how I felt about the hammer on the Zealot instead of falchions. I haven’t math-hammered it out yet, but I like the versatility of having two hammers and how it splits my opponent’s target priority between him and the combat specialist, even if it’s probably higher variance on the Zealot than a pair of Falchions would be. 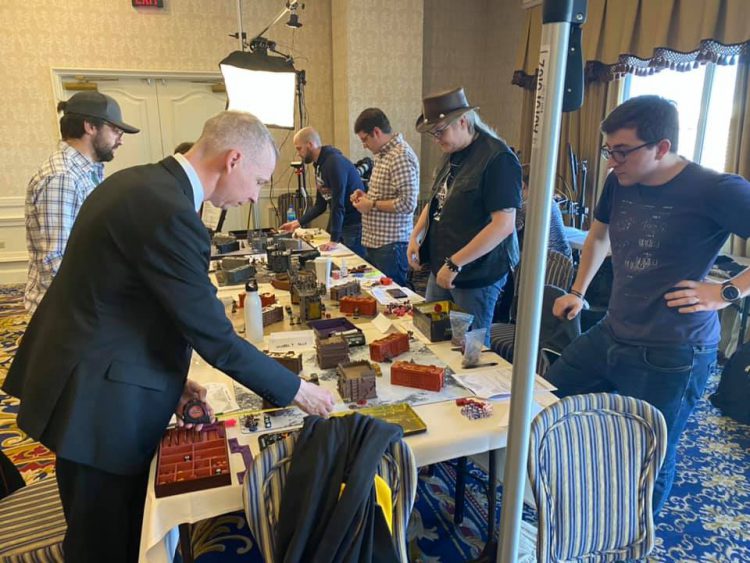 My first championship game was against Daniel Iverson’s Tyranids. Since Tyranids are the other faction I play often in Kill Team, I’m quite familiar with them, and was able to use that to my advantage. Daniel brought two Warriors, four Genestealers, a Ravener and four Hormagaunts. I focused my fire on the Warriors early to break synapse, and then after psybolting a few gaunts and Genestealers, his team broke and started failing nerve tests.

My second game was against Luke Scianna’s Khorne Berserkers. This was a scary matchup for me because if any of those Berserkers got a charge off and fought first, they would chew up my Grey Knights easily before I got to fight back. Luke was able to get into melee range with careful positioning and good charges, but I was able to act first in the psychic phase and cleared the models that were in combat with psybolts. Additionally, because our first turn was uneventful with both of us hiding from each other, I had extra CP available for rerolls on injury rolls to make sure those Berserkers died.

My third game was against another Tyranid player, Philip Manabat. He brought some big bugs to try and deny me any easy psybolt targets for kill more: five Raveners and two Lictors. The main factor here ended up being morale again. Raveners have Leadership 5, and Lictors don’t have Synapse. While the Lictors were quite tanky and survivable thanks to Chameleonic Skin and 4 wounds, I was able to chip away at the Raveners and use the 2CP “Psychic Communion” tactic to get my psychic tests up to that 11+ for D3 mortal wounds instead of 1. Once the bugs started breaking and shaking, I could easily hold more objectives and grab the victory.

My fourth game, and last of day one, was against James “NovemberMike” Mueller, who’s my main practice partner back home. We’ve played our lists against each other several times, and while he can wipe the floor with my Tyranids, he hasn’t been able to beat my Grey Knights yet. That said, after a stressful first three games, James lulled me into a false sense of security with his talk of “not really wanting to be in the top 8 anyways,” and very nearly beat me. I swapped out Thin their Ranks for High Profile Targets, since James typically brings Pious Vorne and Gotfret along with his three normal specialists, giving me five targets for that secondary, and just eked out a 14-13 victory. 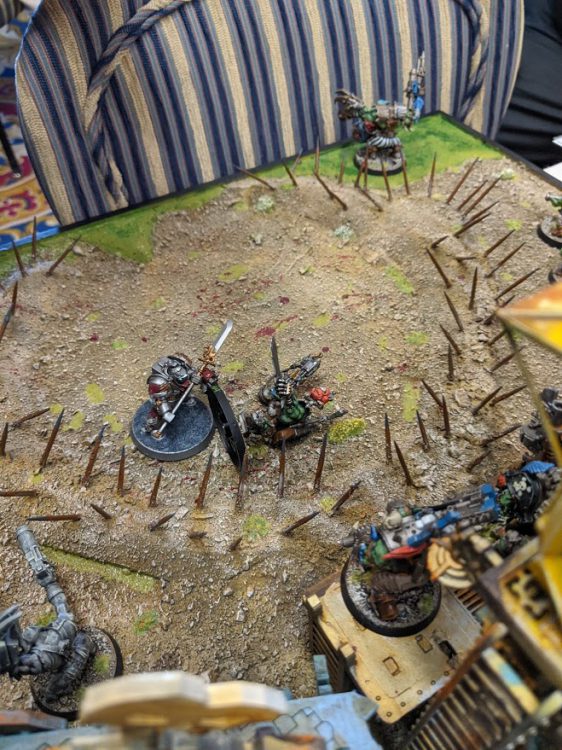 That 4-0 on the first day landed me in the top 8 at third seed! I was in a bit of shock, as I didn’t expect to do nearly that well. My next game was against the reigning champion and top ranked ITC player Michael T Holy. Even worse, I’d never played against Asuryani before, and knew nothing about their rules, since almost no one in my local scene plays them!

I spent some of my evening studying up on Asuryani, but it was too little, too late. That, and Michael is a fantastic player. He told me he was “trying something new” to deal with my Grey Knights, and brought out a Wraithguard Heavy with a D-Scythe. I was actually able to avoid taking hits from the Wraithguard, but in the meantime he was able to hide the rest of his models from my psybolts, snipe off my objective holders with the Heavy Weapon Platform, and then deep strike a Striking Scorpion Exarch into my backline and charge in to finish off my last few objective-holding Grey Knights.

Since the top 8 was single elimination, that was the end of the road for me, but a strong 4-1 finish means I’m 5th place overall. It also means that I went from being well outside the top 40 of the ITC rankings to #19 globally, which is really exciting!

Afterwards, the rest of us in the top 8 who were out of the bracket played some more games against each other, so I got to try my luck against the Asuryani again versus Alex Rutnarak. I lost that game as well, but it was much closer; it came down to a single nerve test in the end that could have swung the game either way.

My first impressions against Michael and Alex’s Asuryani, since they were my first two Eldar opponents: Asuryani are good! Maybe they need some point increases to force them to make a few more hard choices on what to take. Lots of different choices that each have an exarch option means they can bring almost all the exarchs in one list and still have points to spare. The Banshee Exarch in particular is really good. No Overwatch and -1 to hit is amazing.

Before the Saturday/Sunday championships, I was in pod three on Friday Night. I played against Matthew Cairns’ Death Guard, Jesse Fryery’s Adeptus Custodes, and Mitchell Mitchell’s Genestealer Cults, placing second with a 2-1 record (WLW)

My games against Death Guard and GSC were fairly similar. Lots of cheap bodies prevented me from psybolting high value targets, but allowed me to get kill more and hide from strong shooting in combat with weak targets unlikely to kill my Grey Knights.

Custodes, on the other hand, were extremely challenging. Most of my strong strategies depend on having fewer models that my opponent, taking kill more, and then winning objectives on morale in round three or four. I tried to counter with positional objectives, but a Custodes veteran move and first turn charge locked up two of my GKs and I couldn’t get them around the board where I needed. I’ll definitely need to practice a few more games against Custodes to develop some alternate strategies there. 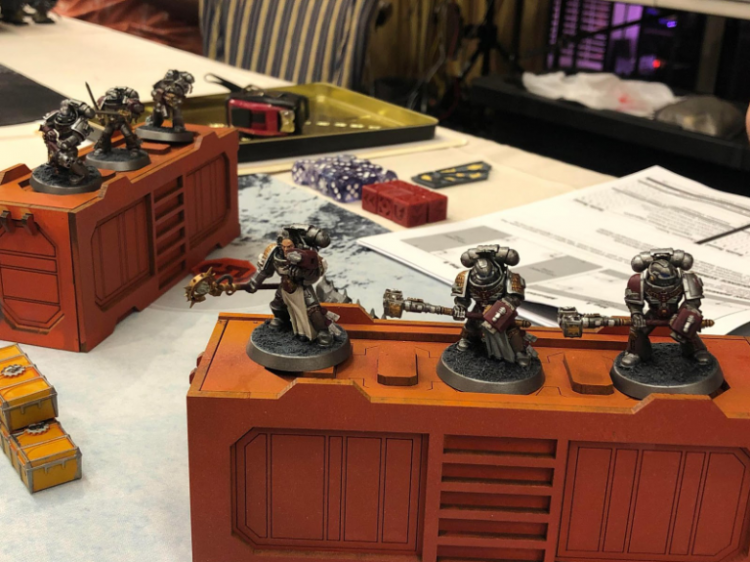 There were a few tactical decisions that I either found myself repeating for their value, or wishing I’d used to better effect:

Overall, I had a wonderful time at LVO, made some great new friends, and learned a ton playing some of the best players in the world! Looking forward to BAO to get a chance to play some of y’all again.

Q. Was there anything you’d do differently with your Kill Team or Tactics now that you have an event with the new LVO rules under your belt?

I mentioned it above, but I need to practice effective use of reserves and outflank. Especially with only six models, if I need to do something positional for a secondary or a bonus objective, getting a model or two into the backline is definitely worth the command points.

For my list, I think I’m going to try out the Zealot with Falchions, or running Falchions/Hammer on a Veteran. The extra strength/attack on the charge is nice, but I think there are a lot more situations where a veteran advance plus a 1CP “Decisive Move” charge could be very valuable to lock someone down first turn. Two players used that strategy against me, and it worked quite well to limit my movement choices.

Lastly, I need to get some practice games against Custodes and Asuryani. They’re both strong teams in this meta that I’m not very familiar with, so I need to develop new strategies and familiarity with them.

Thanks Jacob! That’s it for this interview, but we’re not done with LVO Kill Team content. Stay tuned for a write-up from Goonhammer’s Novembermike as well as our analysis of the LVO Kill Team results.