King in the North: An Interview with North East Open Winner Konrad Bartkiewicz 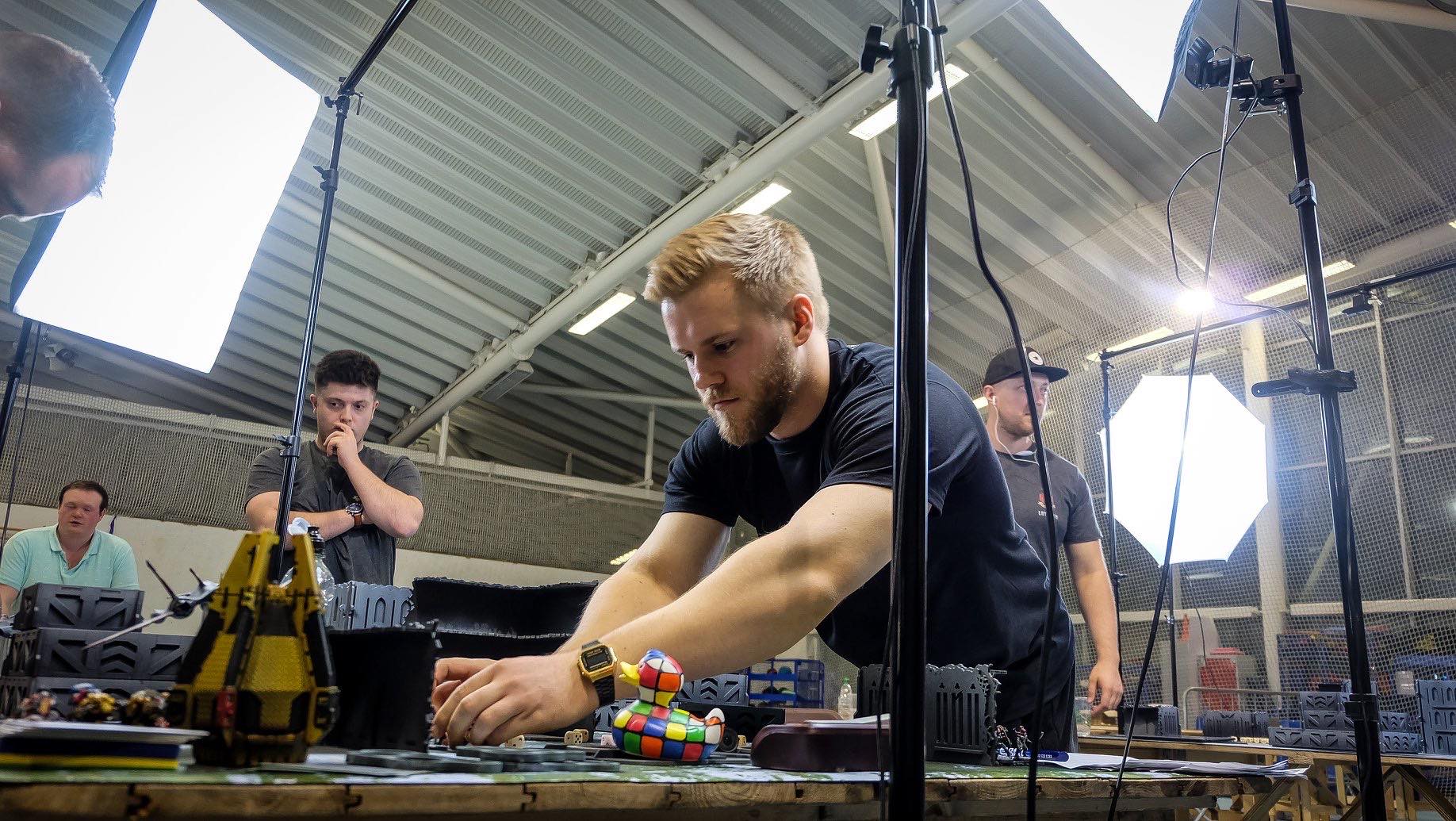 Suddenly, with one announcement from Games Workshop, it’s a whole new world out there. Sometimes it can take a few weeks for big changes to the game to spread through the metagame as we wait for new rules to become “live”, but not this time. The North East Open, as previewed last week, decided to adopt the new rules and allow players to resubmit lists (and ignore painting requirements), so the first major in the post Marine-nerf world is in the books, and there’s good news – Iron Hands didn’t win it!

Instead, after five rounds of competition the trophy was held aloft by Konrad Bartkiewicz of Dice Down, piloting a mixed Aeldari force that we took a look at in the preview linked above. Konrad will need no introduction for our UK and European audience, but for those not familiar he’s picked up more major trophies than we care to go and count, and also piloted an Aeldari list to a victory at the London Grand Tournament 2019 Invitational, taking down a clutch of the game’s best players on the way. It seems entirely fitting that he should be the first to step up and claim silverware for the Aeldari in this exciting new metagame, and we’re thrilled that he’s here to talk about it today.

Thanks for talking to us, Konrad. Walk us through this list.

Thanks for reaching out James. I wanted to build a list that leverages a lot of tricks and tools after having a few rough games over the last couple of months whilst testing ‘Expert Crafters’ Eldar gunlines.

I particularly had in mind lists like the Possessed bomb or Grey Knights that can use a stratagem to shut you out of the game completely or can just blast you from out of line of sight. I had two units of Spears for mobility, aggression and counter punch in combat, a unit of Reapers in a Wave Serpent for powerful shooting with ignores cover, ignore modifiers, and a Farseer for Guide/Forewarned. I took 3 Night Spinners as they are incredibly cheap for the shooting and ignore LOS/cover they provide. The psykers buffed both the Spears and Reapers without having to leave a unit buffless. Rangers deep struck every game and scored me 4 Behind Enemy Lines points each time, didn’t give away easy turn one kills, and were invaluable.

Finally my little patrol detachment gave me the crucial option of Agents of Vect, which can win games against stratagems such as Conceal, Grot Shields or Cogitated Martyrdom, and a CP farm. Having seen players like Sean Nayden and Sami Keinanen have success with Shining Spears I decided to try them out again for myself with the new rules from Psychic Awakening. I was pleasantly shocked to find that, with Hunters of Ancient Relics, they are almost as killy as the Ynnari Shining Spears of old. That and bonuses to charges from deep strike in the form of Ghostwalk, Headstrong and Swooping Dive make them an incredibly powerful unit again with a 44” reach and charges of up to 16” from out of reserves.

The two units of Shining Spears are the both the alpha strike and beta strike unit. I use one with 3++ [editor’s note: from Skilled Rider] on the Exarch to start on the board (as they can better weather turn one firepower) and usually start it in a ruin or my backline out of threat range of the opponent when going second, or frontline them when going first (as there is no more ‘seize’ in ITC). This unit can buff up to a 2++ against shooting, which, with a CP re-roll and Fortune, can be obnoxious and also acts as a pseudo ignore overwatch. This unit is sent 32” with Quicken into enemy lines to cause chaos, take out key targets and force my opponent to spend a turn dealing with them. Once they’re dead I deep strike the second unit and cast Ghostwalk to get a 5” charge and the opponent has to deal with another 9 Spears whilst I shoot with 3 Spinners, 10 Reapers and score objectives.

Tell us about your games. What went well/what didn’t?

I played against Chaos Knights/Thousand Sons, Chaos Knights/Mortarion, horde Orks, Seer Council/Grotesques and Possessed bomb. I went second in all the games except the last, and I was pleased that the list doesn’t just crumble when getting alpha struck. I have to note I didn’t play against either Marines or Grey Knights, so I did have a good run and can’t precisely say how those games would have gone. The two units of Spears worked really well, putting pressure on the opponents and were the perfect “comeback” units. They also killed 5 Knights over the course of the weekend and about 100 Ork Boyz. The list played the new ITC missions really well, able to max my secondaries every game with ease and the mobility helped me net bonus points in 40% of my turns. I think mobility, units that can deep strike, units that shoot without needing LOS and psychic defence are all incredibly important now. I was also very pleased with Agents of Vect; I used it three times and each time it helped me win that game.

One particular game that didn’t go so well was against the excellent MMX player Thomas Douch and his triple shokk attack gun horde Orks. He played really well and put the pressure on me from turn one, rolling strength 11 on his shokk attack guns three times! At one point his relic gun removed 10 Reapers and a Night Spinner by itself. I was able to capitalise on a few moments such as picking up 4 of his characters in a turn with Spears that fell back and charged for 2cp [editor’s note: using Feigned Retreat] and in the final turn I was losing by a point unless I scored all 5 primary points by clearing a unit of boys from two objectives and taking them with my Spears, which I managed to do and so I won 24-23. An incredible game that felt like a final table and Tom is an absolute gent to play against, even whilst I got salty about his shokk attack guns!

Did anything catch you by surprise over the course of the event?

I was surprised by how useful Eldar Rangers are. They scored me 4 points for Behind Enemy Lines every single game, scored linebreaker, scored bonus points, finished off characters, denied easy kills and were a backfield nuisance to deal with.

I think the Space Marine nerf has had a huge impact and has brought Space Marines down from their zenith of tier zero to tier one alongside Grey Knights. This is exciting as now a lot of lists can compete against them, with tier two being occupied by Eldar, Tau, Chaos and Sororitas builds. I think my list fits in as a good anti-meta counter with the Dark Reapers, Spears and Vect but requires appropriate terrain and a few other factors to work very well. Eldar are strong again but aren’t as outright powerful as Marines or Grey Knights.

We will begin to see Iron Hands list revert back to the successor brigades/battalions with one or two grav Drop Pods to abuse turn one Devastator doctrine as much as possible, whilst other players will stick with Feirros hordes, maybe adding in Centurions and other units to utilise two turns of Tactical doctrine more effectively. I think Imperial Fists suffered the most by losing additional damage for ⅚ turns. Raven Guard Centurions are still strong but suffer against mobile lists screening out the board when they go second. Tau are very powerful with Commander/Crisis builds and counter Marines well but struggle against lists like Possessed, so the meta should shape up in an interesting way, with a lot of lists countering each other, as they rightly should in a healthy game.

Is there anything you’d change about your list? Will you be taking it to your next big event?

I was actually ready to quit and switch to Grey Knights! But after this weekend I guess I will give Eldar at least another whirl. At the moment I am only looking at a few minor changes like dropping the missiles on the Wave Serpent or swapping out one Night Spinner.

Thanks for talking with us. Any plugs or shout outs you’d like to make?

Always a pleasure James, thanks for having me. Shout outs to Josh Scott, a fellow physician who helped with the inspiration for this list, my testing partner Tom Roberts and of course my team Dice Down. Finally, of course, a big shout out to Ricci Lowe of Majority T3 for putting on an incredible event.

(P.S. Dice Down have won the first 3 majors in the UK… your move Glasshammer xo)

So there you have it – Eldar take down a major in style and (at least in your humble correspondent’s opinion) everything is right with the world once again. Thanks again to Konrad for taking the time to tell us about it!

Anyone who’s kept track of results from the weekend will have seen that while Marines still put in some great performances, there’s been quite a shake up around the top tables. The good news for you avid tournament news fans is that we’ll have plenty more content coming out of the North East Open tomorrow, taking a look at how the lists we previewed performed and getting some thoughts from some of the players near the top of the pack. Stay tuned to Goonhammer for more coverage of the new metagame, and give us a shout on contact@goonhammer.com if you want to get in touch.