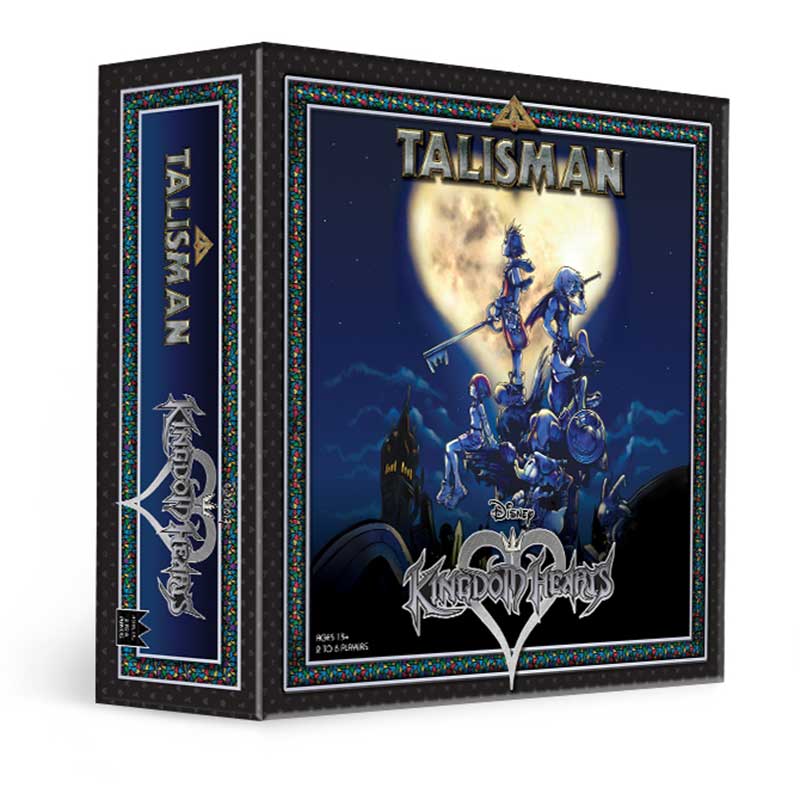 Oh Talisman. If you ask someone who has played this fantasy epic you’ll get one of two reactions. Some will groan and roll their eyes, cursing the game’s dated mechanisms and over-reliance on luck; the others will grin with a twinkle in their eye and likely reminisce about a particularly awesome adventure they experienced through play. Neither player is wrong, or perhaps I should say that both players are right. Talisman is excruciatingly random yet epic, chaotic yet narrative, and perhaps the perfect game engine for a Kingdom Hearts board game.

Originally published by Games Workshop, Talisman: The Magical Quest Game has gone through quite a few iterations. The First Edition was shown at the 1983 Games Day convention, and the follow up Second Edition came shortly thereafter. It was mechanically identical to the 1st sporting only some cosmetic upgrades. Third Edition brought some fairly significant structural changes, before 4th Edition reverted to the 2nd Edition system, borrowing only some rule changes from 3rd. 4th Edition (stay with me here) was sold for only 1 year by Black Industries before a Revised 4th Edition was announced by Fantasy Flight Games. FFG published numerous expansions for this beast before they parted ways with their Games Workshop license. This brings us to today, where the Revised 4th Edition is being reprinted by Pegasus Spiele. Finally, licensed editions are being produced by TheOp.

Still with me? Kingdom Hearts fans may already be smiling as they follow along. It wasn’t lost on me as I pushed Sora and Kairi around a map that this tortuous release mirrors the absolute mess that is the Kingdom Hearts video game family. Originally released as a Playstation 2 Exclusive, the direct sequel was released on Game Boy Advance. Kingdom Hearts II (not the direct sequel) returned to Playstation before the next game went to…mobile games? From there it’s pinged-ponged across consoles including a title released for V CAST an exclusive broadband gaming service for Verizon Wireless customers. There is a reason that this image by Jeff Delgado is the ultimate summary of the Kingdom Hearts story on a narrative and meta-level:

However, for those of us who have managed to follow this ridiculous web, the Disney-meets-Final Fantasy action series has carved a firm place in our hearts. The original release is truly one of my favorite video games of all time. The galaxy-spanning apocalyptic Final Fantasy story is grounded by the inclusion of Disney characters and worlds, in a way that never fails to bring a smile to my face and never dips into the saccharine. Similarly, Kingdom Hearts Talisman definitely integrates those animated touch-points in a near perfect reskin of the Revised 4th Edition.

Like the Revised 4th Edition that this is based on, Kingdom Hearts Talisman’s large colorful board features 3 primary zones organized into rings. Rings are nothing more than a loop of spaces where you’ll have the adventures that make Talisman so beautifully frustrating. Spaces may have unique features, and typically direct you to draw some Adventure cards. The Outer Ring is where you’ll spend most of the game and is the least-dangerous. The Middle Ring’s spaces throw more Adventure Cards at you—potentially positive, but often punishing. The Inner Ring is is navigated one space at a time and culminates in the Door to Darkness; whoever seals this door gets a massive point bonus and likely (but not definitely!) will win the game.

Navigating these rings are the crux of the game and showcase what is almost the only choice you have control over in the whole game: which direction to move. That’s a bit of an exaggeration but only a bit; on your turn you’ll roll 1 die and move that many spaces either clockwise or counter-clockwise. Upon arriving at your chosen space you’ll draw 1-3 Adventure Cards depending on the space before encountering the space’s printed features. If the roll-and-move isn’t enough to send you screaming, the Adventure Deck might do it. The deck is about 100 cards and includes all the enemies, objects, followers, and locations you’ll face haphazardly mixed together.

It’s entirely possible to see enemy encounter after enemy encounter, never getting a chance to breathe or drawing the objects and followers you may need to defeat an enemy. It’s also possible you won’t see enough enemies to grow strong enough to tackle the Middle or Inner Rings. Even if you get a nice even spread, there’s no guarantee that what you see will be particularly helpful. There are some punishing enemies in that deck, including one that can turn you into a Heartless for three turns which is kind of like Skipping Your Turn only there’s the chance of death. The intended arc of slowly growing powerful enough to claim your Keyblade and face Ansem is not necessarily guaranteed.

Take one of my early games. My sister played as Mulan whose ability allows her to combine her Magic and Strength stats when in combat. Her arc was a natural one. She saw quite a few enemies and despite having little to no objects or followers, was able to leverage Mulan’s innate abilities to grow physically stronger. After an hour or two of rolling she made it to the inner ring and slowly but surely advanced on the Door to Darkness, ultimately sealing it. Me, on the other hand, had no such arc.

I was playing as Magic dominant Kairi. Progress in Talisman comes by defeating enemies and turning in their cards to increase the stat used to defeat that enemy. Strength enemies are fought with brawn and increase your strength, Magic enemies with magic…you get it. Unfortunately, there are only 10 Magic enemies in the entire deck making it difficult to leverage my strength. In another departure from Talisman, the Inner Ring in Kingdom Hearts Talisman must be bested by Strength regardless of whether you move clockwise or counter-clockwise. Either way, I spent most of the game amassing a large pile of objects and followers because that’s all I drew from the deck. The stat boosts I got came from Board Spaces or characters like Hercules’ Phil emerging from the deck and camping out somewhere.

And yet…I won. Points are awarded for all sorts of things. Every object, every follower you have hanging about, and every stat boost awards as point as does left over money. Despite only defeating two enemies the entire game and being the only one to never even get a Keyblade, I won our game of Kingdom Hearts Talisman mostly be virtue of being a roving Item Shop. As you might imagine, my sister was a little frustrated having just sealed the damn Door to Darkness.

So it goes with Talisman and so it goes with Kingdom Hearts Talisman. It’s a game that plays you as much as you play the game. I knew what I was doing of course. When I realized I couldn’t keep pace with the leader I focused on expanding my inventory and hoarding followers but that doesn’t mean I wasn’t at the whim of the game. I still needed to roll right, to draw right, and hope that my fortunes didn’t change; had I started to see enemy monsters late in the game it would have been too late to take advantage of skill boosts.

However, everyone had a damn good night of gaming. [My only real frustrations with this game are the various production misprints; there are text errors printed on the board and a couple cards that are easy to figure out the intent but frustrating nonetheless.] Even my brother who saw more than his fair share of turn skips and near death experiences enjoyed the play. That is also how it goes with Talisman. That damn Adventure Deck carries so much excitement and promise that even when you curse it you smile. My favorite element is the way Location cards stay on the board and linger, forever altering the makeup of the board. Every time you play things will be just a little bit different; shops move, characters appear earlier or not at all, and thus the Gummi Warp you traverse will be just a little bit different.

None of that is all that different from the original version, but if you’re a fan of Kingdom Hearts then this is absolutely worth a look and breathes fresh life into the game. So many small touches appear in this edition that show how lovingly the license was treated. Pongo & Perdita appear as a location card while their lost puppies are followers. Once you find Pongo & Perdita, their card will remain on the board forever and puppy followers can be returned for munnies, just like the game. Phil gives you Strength boosts for visiting, Mushu assists in combat, and the Gummy Ship can be used to hop directly into the inner rings. Everything fits seamlessly and you get to tell the sort of zany story that is at the heart of Kingdom Hearts.

I hope, truly hope, that TheOp doesn’t stop here with Kingdom Hearts. They’ve already announced Batman and Star Wars versions of Talisman but I really want to see expansions. The Revised 4th Edition expansions featured enough L-shaped boards to wrap your base board in another, larger ring of spaces, and I want nothing more than to visit Toy Story world or the Pride Lands. If you can embrace the randomness and give yourself into a very old school style of board game, the Talisman experience is hard to beat. It’s one of the ultimate beer-and-pretzels gaming experiences, perfect for when your brain needs a night off from building decks or placing workers.

A copy of Kingdom Hearts: Talisman was provided to the author by the publisher for this review.