Kings of War: A Year in Review 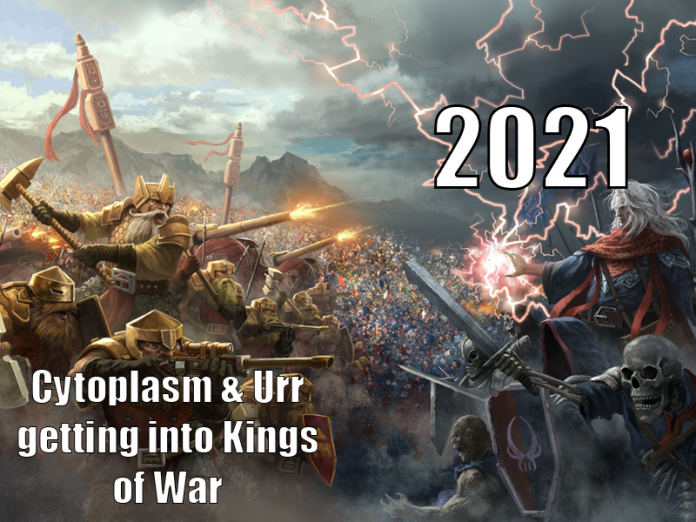 It’s been a big year for the both of us on the Kings of War front. From finding out Kings of War even existed to diving headfirst into the tournament scene, painting up armies and starting to write this very column.  We dive into our relatively unfiltered thoughts regarding our Kings of War journey through 2021.

For me Jumping into Kings was easy. I’d been playing Warhammer 40,000 for a while, but was growing dissatisfied with the state of the game, especially with the power creep and the book bag creep.

A work friend mentioned a one day event for Kings of War was coming up. He lent me a copy of the rules and an army (League of Rhordia), and I went along and had a blast. I got stomped pretty hard in all my games, but the variety of armies, the looks, the themes and the models, grabbed me hard. After looking through all the factions (here’s our summary for you), the theme and unique style of Mantic’s Nightstalkers were the faction I picked.

Leaning into the cosmic horror vibe, I picked a galactic paint scheme. It also let me paint somthing other than reds and metalics that I had been using for my Ad Mech stuff. This also let me try out a few new techniques, like sponging, which I’d never done before.

I also got to use (and stare longingly) at models from a whole new variety of manufacturers. While I did include some Games Workshop stuff from a previous, abandoned project, the other models are mainly from Mantic, with a few from Wizkids and some 3D prints. All of which I think look great and suit the theme of the army. Allowing any miniatures you like really gets the creative juices flowing!

I used desert-style basing to add some contrast to the blue hues. We’ll eventually get to writing about multibasing, the style of which you’ll see above, which may just be the greatest innovation in rank and flank games.

Given our city spent a lot of time in lockdown this year, I’ve painted up a huge amount. This painting was almost entirely for the Nighstalkers, but I did win a dragon for a tournament wooden spoon prize, and have painted it up as well.

I’ve now basically got the army fully finished, with just a few more units to add thanks to renewed life from Clash of Kings 2022 (review here). Now it’s just practicing and maybe even getting good with it.

For next year, I have already started a few test models and ordered some more (buying things counts as progress, right?), and hopefully this one will be able to be used as a few different armies.

My journey into Kings of War started the same (shared colleague/enabler), yet I went in for different reasons. I had quite a considerable Warhammer Fantasy Battles collection of old Warriors of Chaos, Orcs and Goblins languishing in cupboards. I took my Goblins to this first tournament and was amazed that not only did I manage to play my first games of Kings of War in a tournament setting, but I enjoyed it the whole time!

For 2020 I had been painting Drukhari non-stop, so when I got some of Mantic’s Forces of the Abyss I was happy to change pace. Since then, I haven’t looked back (sorry True Kin of Commorrogh).

My Warriors of Chaos collection was the smallest of my armies, hence bolstering it with some of Mantic’s miniatures seemed logical. I painted up my old Chaos Warriors to be Abyssal Guard, and then recruited Dragon Ogres to be Molochs. All these neglected models were getting used, and, more importantly, getting painted!

The most exciting thing I have taken from my year in Kings of War is the importance of movement. Although movement is very important in Warhammer 40,000, bringing the most guns was always an easier option. By contrast, bringing the most guns to a Kings of War game is usually unwise (unless you’re Jeff O’Neal), and I had to learn this right from the basics. Perhaps when I return to my Aeldari, I will be a better general.

This year was also the first time I have fielded a fully-painted fantasy army! Something about multi-basing makes the completion of a unit ultra-satisfying. No extra models, just the exact amount needed to fill that base and no more. As Urr suggested, we plan to rave about multibasing soon, because people need to know about it.

My goals for next year are to finish up TWO ‘new’ armies. I have my Goblins collection that needs to be repainted (sorry 15 year old me, they’re just not very good) and multibased. Then I have those very tasty Riftforged Orcs to get into. Am I a sucker for Evil armies? Yes. It’s probably the fact that painting evil armies grants a certain leeway. Something that the crisp clean lines of the Good armies doesn’t brook.

While we’ve not been quite as prolific as some of the other authors here, there’s still plenty more juice in our tanks. We can’t wait to bring you more good stuff in the following months, including a road trip to Australia’s biggest Kings of War tournament, new armies, hobby updates and maybe even finishing our “beginners guide” style articles!