Kings of War: The Road to ConVic22 Part One 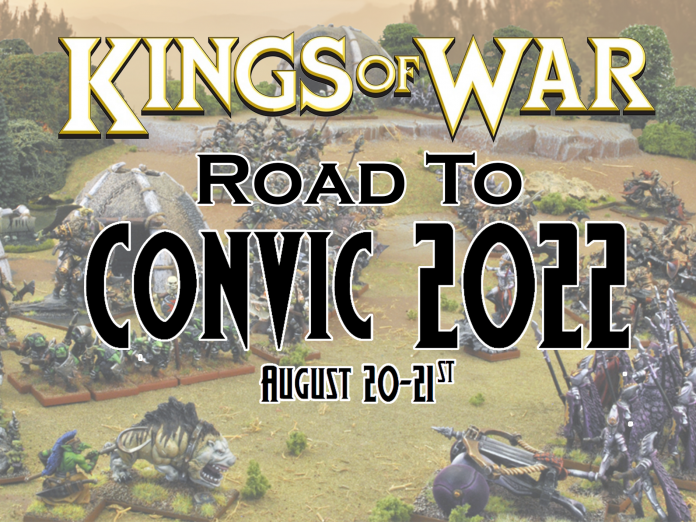 G’day Goonhammer readers! In today’s article we will be discussing the upcoming Australian Kings of War tournament ConVic 2022, and the armies we have in mind. It has been a while since our last update, but things are not as fast in the world of games not made by Games Workshop. However, Mantic has by no means been idle and they’ve been hard at work on the new edition and box set of Firefight (check out the Goonhammer review of that game here).

With only a population of 25 million people across a continent only slightly smaller than the United States, we have but a few big Kings of War tournaments in any given year, yet when they happen they are a Big Deal. The player’s pack for the next big tournament in Australia, ConVic 2022, was revealed last week, and we wanted to share with you all just how much fun we think this event will be.

For those readers with us from the very beginning, you may remember we spent some time writing about our plans to attend last year’s ConVic, but the event was cancelled thanks  to everyone’s favourite pandemic. This year it’s back on, and with renewed vigour we tackle designing new armies and (hopefully) actually finishing them.

The player pack for ConVic 2022 looks astounding (see it here), which is all thanks to Matt Sellick of the Direct Misfire Podcast. It is what is on those very aesthetically pleasing pages, however, that is exciting and sets ConVic 2022 apart from the usual Australian tournament.

Firstly, this is one of the rare occasions that the painting score is worth actual tournament points. Granted, it is not many, a maximum of 15 out of 167. Our usual one day tournaments painting “scores” are a best unit only, to not punish new players or those building new armies, and they have no overall effect on placings. This definitely harkens to scoring systems akin to those seen in the United States, where so-called “soft scores” can be a major component of the overall ranking.

The Army of Urr 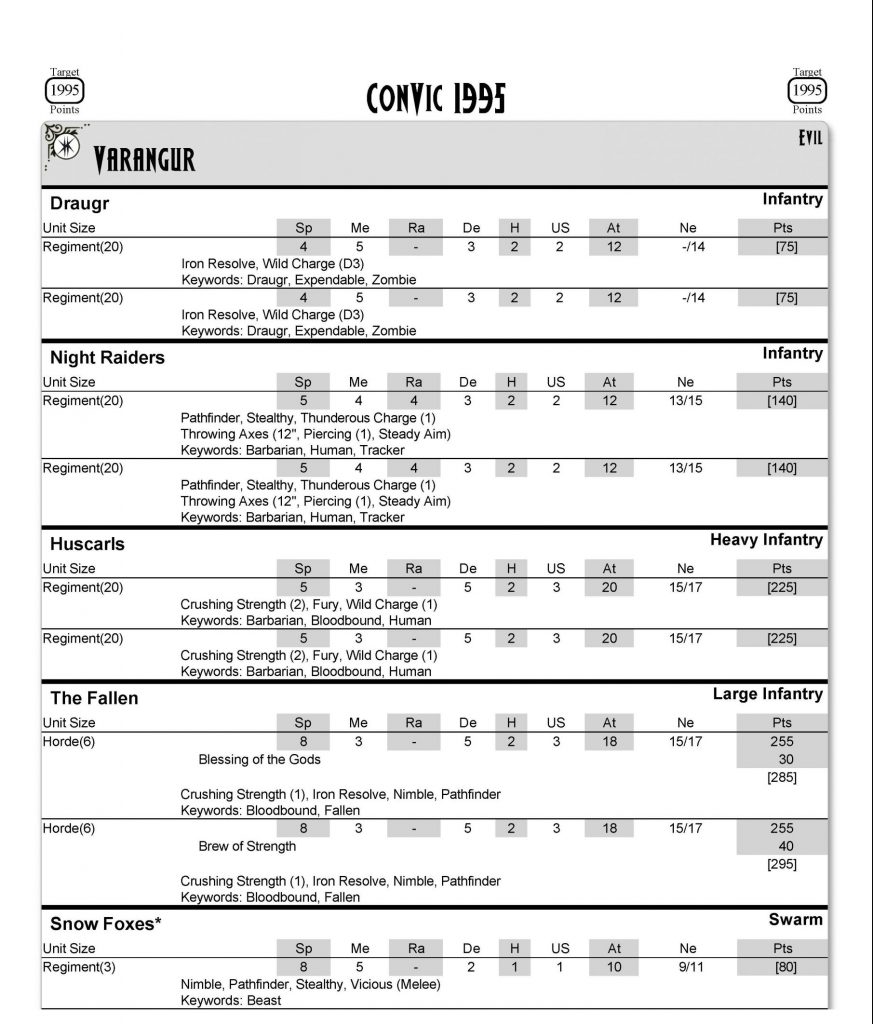 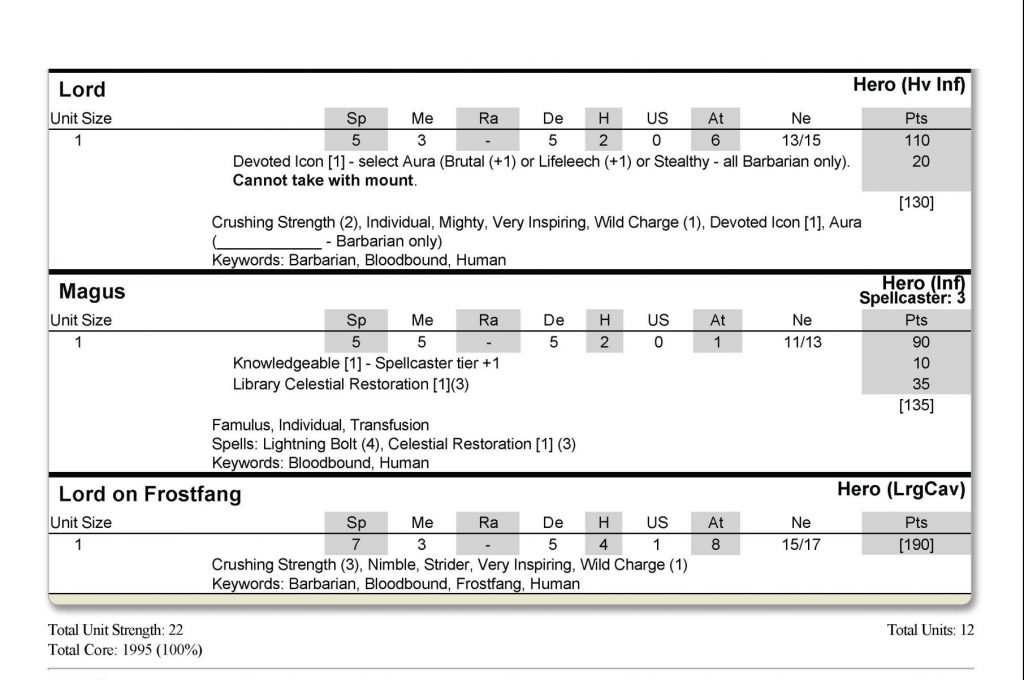 I’ve got a pretty solid set of lists, I think. It’s a bit different from the usual Varangur lists as it’s all infantry, but I’m going with an Aztec style force which means no horses for me.

The Huscarls and Fallen are the main hammers, with Draugr and Snow Foxes chaffing for each respectively, and a Lord to Inspire each group as well. Fallen aren’t functionally much different from a cavalry unit, so there is a speedy battle group and a slow one.

There’s quite a bit of Defence 5 among the units here, so it should be hard to chew through for most opponents, and Celestial Restoration on the Magus should help keep anything important that does get hurt alive.

The Night Raiders are a bit of a hybrid, the throwing axes can do some damage at shot range, and Thunderous Charge and melee 4+ mean they can’t be offered a flank or they’ll put some real hurt out on all but the toughest units. Even with their low defence, parking them in some terrain and daring the opponent to come get them can be a strong use as well. Bows might be better suited to that role, but that, and the whole list really, needs some play testing to see what works and what doesn’t.

Scaling up to 2300 points, I’ve added another two units of Snow foxes for chaff, and a Drain Life Magus, to add some ranged damage with Lightning Bolt, and to help keep the Huscarls alive with Drain Life, on top of Celestial Restoration. There are a couple of extra items on top to make it to the round 2300, and a couple of them are still in flux.

I am aiming for a high hobby score this time around, and would love to be in the top 5. This won’t be easy as there are some exceptional hobbyists around here. We’ll have to see who else comes, but I think I’ve got a good chance based on the rubric. While my painting is probably not at the “very high standard” needed, I’ll be aiming to hit 4’s or 5’s in the hobby and theme categories.

Speaking of theme, I am going for an Aztec inspired army, using the Mythic Americas range from Warlord Games (here). As soon as I saw the models, I knew I had to make an army out of them, and after a while of looking settled on Varangur. This was mostly because of the mix of undead and living forces which matched the models I was most excited about; the Tlalocan-Bound Dead (Draugr) and the Tlalocan-Bound Marauders (Fallen).

These are also the models I have painted already, so based on that I made the list I talked about above. These guys, along with some heroes, starts me with about 800 points worth (not including items) of painted units, so there’s still a lot to go.

I’ve come up with what I think is a pretty solid list for each of the points limits, with a little bit of flexibility if the unit choices change, based on the models I think I can get done. This leaves me to paint another two-thirds of the list in two and a half months, along with getting some games in to make sure it works.

So this weekend’s job was to crack open the boxes of models I have, and start assembling and priming. 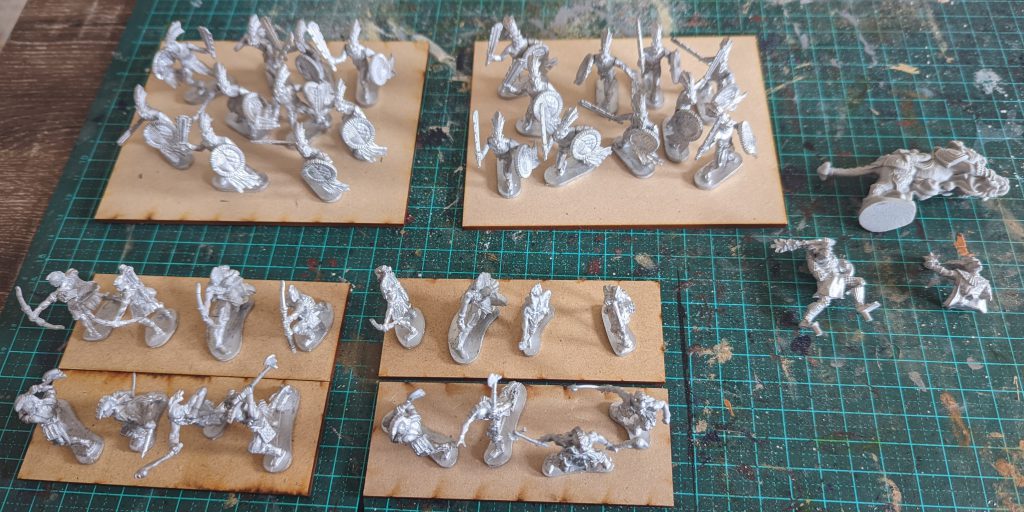 The Army of Cytoplasm 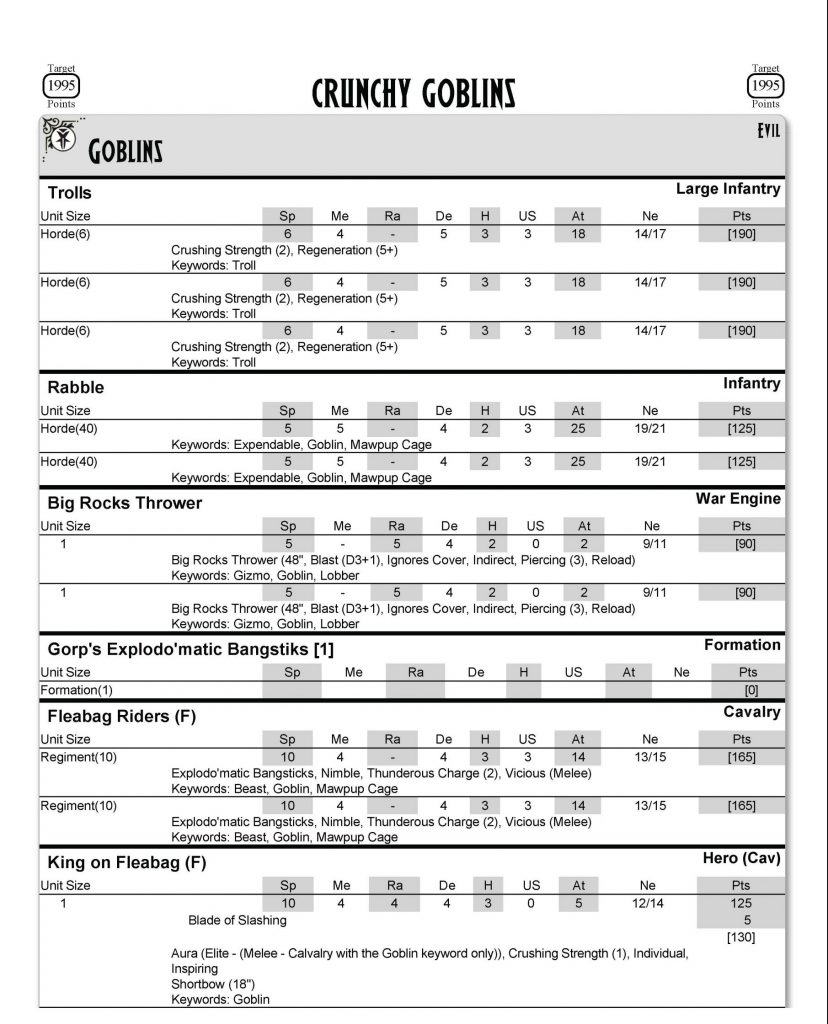 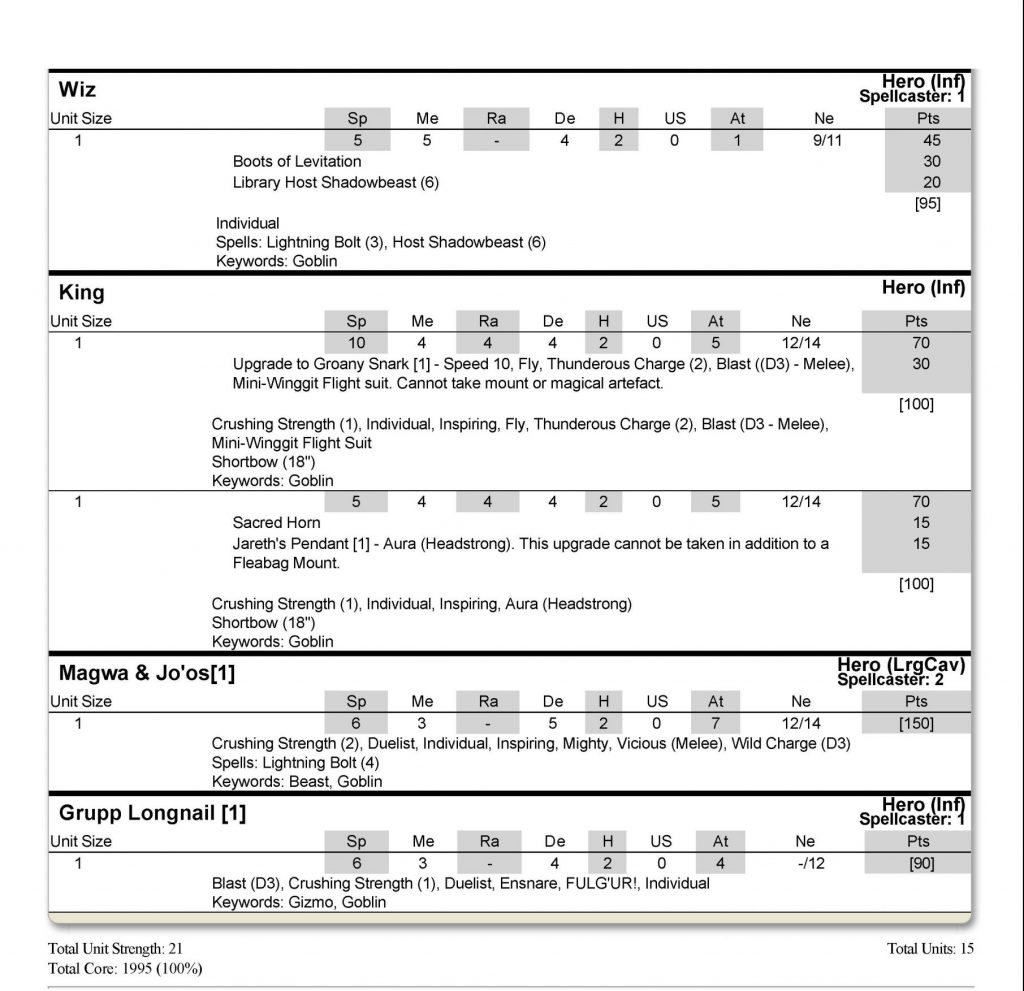 For me, 2022 is the year of the Goblins. It all started with the new Clash of Kings 2022 updates that brought in a slew of punchy units for Goblins; Groany Snark, Grupp Longnail and Gorp’s Explodomatic Bangstiks. Prior to these units, Goblins excelled at shooting, and were middling in melee (at best). Now, finally, the Goblins can beat it out with the rest of them.

Using my considerable Warhammer Fantasy Battle collection of Goblins, I have put together a mixed arms force which means a little bit of everything. I have the solid melee centre of Trolls, some obligatory hordes of Rabble (just to give the opponent something to chew through), the hard-hitting Groany Snark and Grupp, some fast cavalry with the Bangstiks, and finally a considerable amount of shooting with the two Rock Throwers and a spattering of Lightning Bolt.

The army (kind of) works by pushing the Trolls up with Rabble on one flank and the Fleabag rider formation on the other. Despite only being Fleabags, the formation bonus of exploding hits on 6’s makes opponents quite wary of engaging. The Rabble on the other hand just takes a while to kill, even if they will cause little damage in return. All the while, the war machines will chip off damage.

The powerful characters that are Groany Snark, Grupp Longnail and even Magwa and Jo’os add to the above plan by applying their considerable damage to whichever part of the army appears to be faltering. A reliable 3 to 18 damage never goes astray, and Grupp’s pseudo-Weakness debuff on damaged enemies is just lovely.

Just because I have a collection of models for a decade already doesn’t mean the army is ready to go. Very little of my Warhammer Fantasy army was painted, and the few models that were painted were quite very average (Goblin Green skin – 3 coats). Over the next 3 months I plan to paint the 2300 points of Goblins required for this tournament, and this did influence some of my unit selection (15 Trolls versus even more Rabble?).

Like Urr, I am aiming for the soft scores focussing on Paint, Hobby and Theme. I am by no means a talented artist, and I won’t be applying hours of work to every Goblin (as I value my remaining sanity). What I will be doing is trying to make my Goblins look like they truly live in the world that is represented by their multibases, which is where I truly hope to draw the eye.

The look for my Goblins’ world will be that of creepy forests and foreboding swamps such as the forests in Robert Eggers’ “The Witch” or the Crookback Bog of Velen in the Witcher universe. The idea is that this will twist the comical look of Goblins into something more sinister. There will be a few trees (not too many, I have learnt how annoying trees can be on multibases), as well as some “fairytale” huts I will be painting in a very sinister fashion (hopefully).

As far as the Goblins are concerned, I have currently painted 45 Rabble, a Rock Thrower, Magwa and Jo’os and two Trolls. That only leaves all the Fleabag (Spider) Riders, some more Rabble to hit the preferred model count, another Rock Thrower and a bunch of different characters. To get this done by August is achievable, but more importantly having such a goal will ensure I actually get it all painted! For Goblins languishing in my cupboard for a decade, this will be the true achievement!

Join us in a few week’s time as we touch base with how our armies are progressing and whether or not we think we will actually make our tournament deadline!