Kings of War: What is chaff and how to use it? 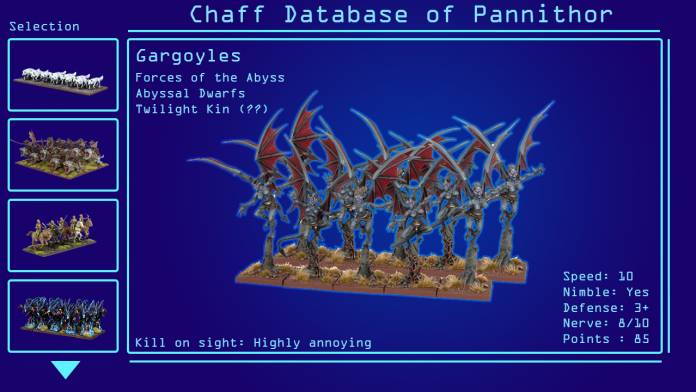 G’day Goonhammer readers! Chaff units and using them are an integral part to Kings of War (and wargaming overall), but rarely is the term “chaff” explained. Having become part of wargaming language decades ago, newcomers are often left wondering what it is and why is it so important? In this article we answer that very question; what is chaff and how to use it?

The Wargaming Definition of Chaff

In wargaming, chaff is an expendable unit that is used to disrupt and delay the opponent’s advance. There’s a bit more to it (more on that later), but the premise is that by holding up the opponent’s units, one’s own army can set up advantageous positions. It could be as simple as ensuring a charge with a key unit, or setting up a devastating multicharge. Either way, chaff are a key part of implementing a battle plan.

To newer players, it isn’t immediately obvious why one include weak units; surely the best armies simply cram in all the best units, right? Unfortunately, no. We would all love to charge into battle at our whim, rarely does it go as planned. Faster units can hit your army first, shooting could disrupt your lines, and terrain can slow things down. To get the most out of key units, chaff is necessary to get them there.

The best chaff units are expendable units, but technically anything can be chaff depending on the situation. A Mind-Screech could be shooting whole units off the board, before ending its life as a speed bump against enemy cavalry to save a key unit. Fortunately, there are many units in Kings of War that function much better as chaff, most of which fall into one of two categories; standard chaff and thick (or ‘thicc’) chaff.

The most commonly seen variety of chaff. These are usually infantry or cavalry troops; Gargoyles, Fleabag Sniffs, Snow Foxes, Battlecats, and Gur Panthers are prime examples. What makes these units great chaff are three key traits:

Some armies do not have access to units that meet all of these criteria, but most will have some form of cheap, weak units. The key is that they are expendable.

Thick chaff, also known as ‘thicc’ chaff thanks to the power of the internet, are the tougher counterparts to standard chaff. Thick chaff are typically large infantry regiments; Nightstalker Butchers, Forest Shamblers, Water Elementals and Ogre Warriors to name a few examples. The features of the best thick chaff are:

As alluded to above, chaff is used to get in the way of the opponent and help stronger units get into the right positions. However, depending on your army and the opponent’s army, the way that chaff does this differs.

The most common application of chaff is defensive screening, where chaff units are positioned in front of the battleline. When the opponent has faster units, defensive screening provides a wall of chaff that they must charge and kill first. This then provides your own second wave of units the opportunity to charge right back, assuming the chaff are out of the way (dead or gone).

The main point of consideration when applying defensive chaff is how far out to put the noble chaff from your battleline? The maximum distance is of course depending on the charge range of your units, taking into account the potential 3” the opponent can move back after obliterating the chaff.

One reason not to put out chaff as far as possible, however, is in the protection of your main units from ranged attacks. High value units are a prime target for shooting, and if chaff is sufficiently in the way they will confer obscuring cover. This might force your opponent to shoot the chaff instead, but keeps your main unit unharmed (for the time being). This is all a different story when war engines that ignore obscured are involved, in which case the chaff will need to be the same height or taller to protect the unit behind.

When the opponent is slower, or not moving much at all (for instance, shooting armies), aggressive screening can be used  to get in fast while still maintaining control of the battlefield. In such situations, chaff charge key units in the enemy battleline; ranged units, enemy chaff and main units (such as their hammer or anvil units). This pins those units in place for at least a turn while the rest of the army can get into positions of advantage, setting up multicharges on tough enemy units or stealing away loot tokens.

Any chaff can be aggressive, but often the situation calls for at least one damage to be dealt in order to apply Disordered (prevents shooting, removes Thunderous Charge and more). Hence, the more combative chaff does this better.

On occasion, assessment of the enemy forces reveals that the second or third unit of Gargoyles is not required to engage the opponent. Or, by Turn 5 your chaff are somehow still alive. In such cases, chaff are best employed in the acquisition of scenario points. This could be babysitting distant objectives, sitting in key scoring regions of the battlefield, or running off with loot tokens. Just remember the unit will become much slower with a loot token, so make sure there’s a viable escape plan. Don’t want to be giving away tokens to the opponent if it can be helped.

Cheap combat heroes with the Individual rule can make for some excellent chaff, however the application of such units is very specific so we wanted to go over that briefly here.

The advantage of being Individual is that they get a free pivot before moving, facilitating charges in any direction. This makes them an incredibly flexible tool to quickly fix problems (such as pesky Greater Air Elementals).

There are two major downsides of Individuals. They are Yielding, which means enemy units can move or charge through Individuals so long as they finish clear of the character. Second, if they are routed by an enemy unit and that unit chooses to Overrun D6”, should they make contact with another unit, the enemy gets to fight again as if it had charged. The special rule Mighty improves this situation as that Individual is no longer Yielding, but the Overrun into combat can still occur.

With these strengths and limitations in mind, Individuals are best employed as aggressive chaff. Moving in any direction to hit enemy units and hold them in place. Make sure to keep your own units more than 6” from the unit in combat with the Individual (i.e. out of Overrun range).

Individuals also have more difficulty locking down your opponents units. A well-placed swarm can block off options for multiple units, while an Individual may not even lock down one, with an unlucky set of dice.

A Battle of Chaff

Chaff are integral to controlling engagements across the battlefield. Chaff units aren’t usually the most exciting units in any army, but they help ensure those exciting units get where they need to be. Using chaff takes practice; learning placement, timing and chaff quantity will take some trial and error. For beginners this can be a frustrating process, but when you finally use chaff correctly, having your key hammer unit destroy the opponent without consequence is immensely satisfying.