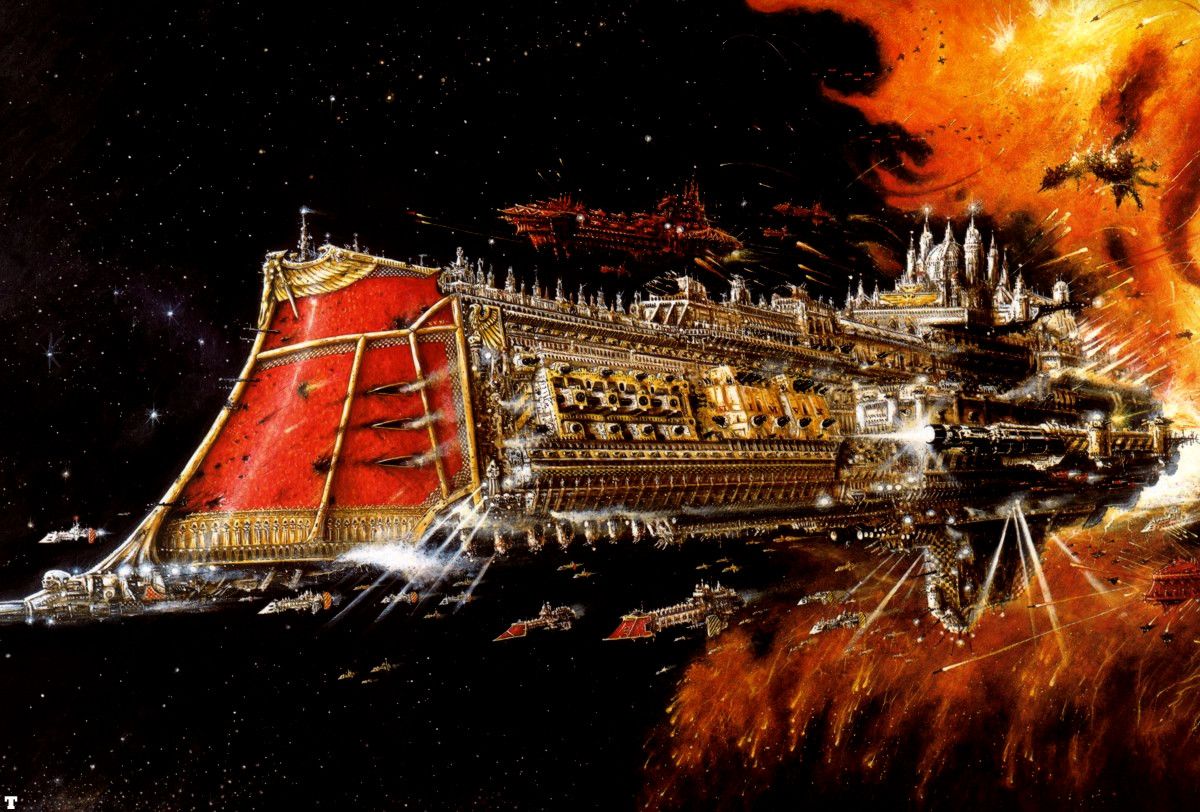 In these unfortunate COVID times one of our players was unable to participate in the campaign. Fortunately, another enthusiast stepped right in and the campaign kicked off with a quick 2v2 training game before diving on in. We hope that in the future Logan Payne will be able to participate, but until then I’d like to introduce…

How to describe Puck? Well, he’s a deeply confused man as Puck lives in Minneapolis while also being a Green Bay Packers fan – a notably cool and good trait. However, he is also somehow a St. Louis Cardinals fan which is a crime so nearly unforgiveable that only the Chaos gods themselves could take him in. So who better to helm the Chaos incursion fleets than the pure evil of the ‘best fan in baseball’? 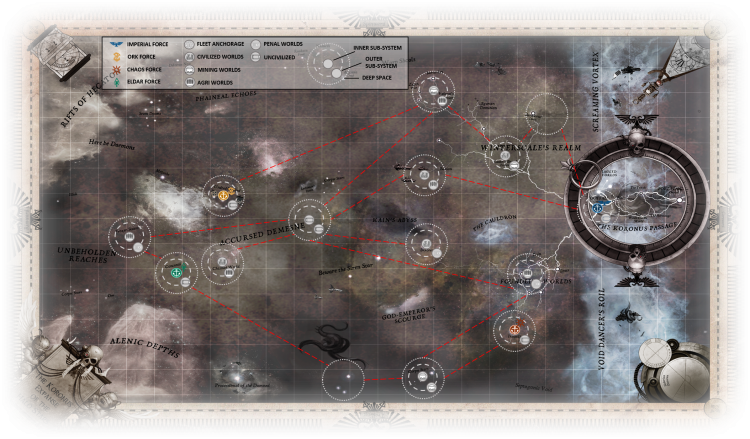 The First Breath of a Long War

In each campaign turn, players will alternate positions so that no player is always first or last – the cycle will repeat every four turns. Like most campaigns, the first turns are largely uneventful and quick, but serve to set up the later turns and the battle lines therein. As a result, this will be a relatively straightforward update that serves to set the tone for later narrative and campaign dynamics.

Following our intro 2v2, the first campaign turn saw us run through the campaign rules to get a feel for the campaign action mechanics. We agreed to reserve 40k Crusade roster building for a later date as the fleet dynamics were the only thing likely to be initiated on the first day. While the Ork and Imperial factions opted to settle their home subsector’s outlying systems, the Chaos and Eldar factions pushed outwards, skipping the uncivilized worlds for the more valuable worlds in neighboring subsectors. 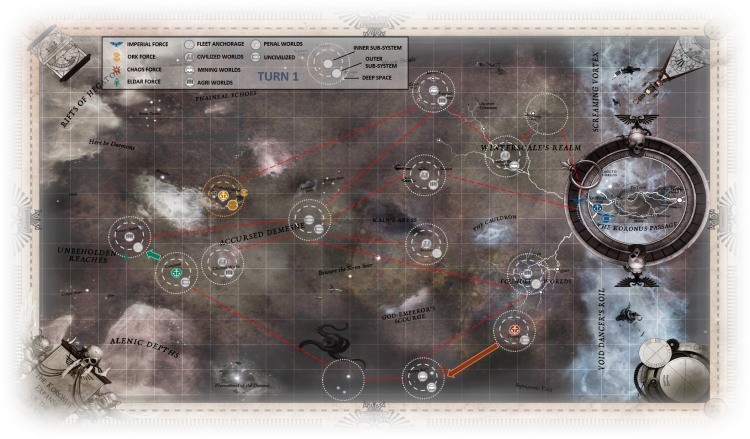 Turn brought continued expansion by all players – Imperial and Orks expanded beyond their home subsectors while the Chaos and Eldar factions solidified their hold on their respective neighboring subsectors. Interestingly, the Imperial faction chose to move towards the Orks – teeing up an early opportunity for conflict. 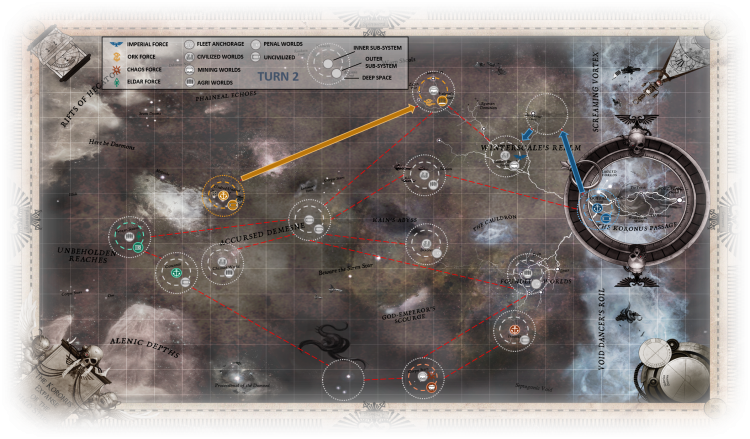 Each faction has solidified it’s hold on neighboring systems – neutral territories are rapidly disappearing and conflict grows increasingly likely – especially along the border of the Imperial/Ork territories. 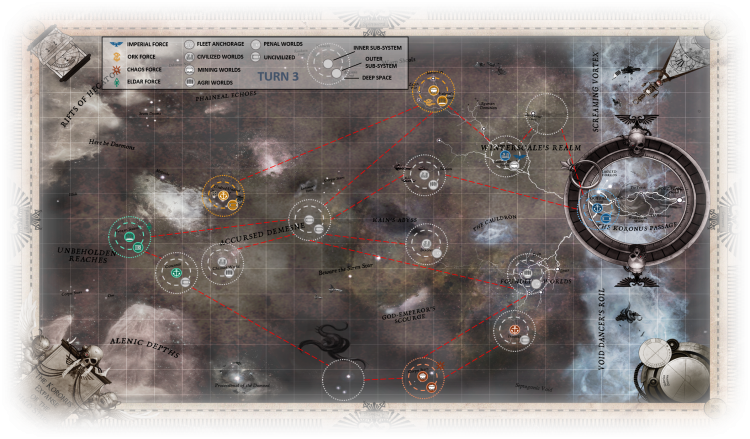 Turn four closed out by seeing the first fleet engagement of the campaign. The Imperial fleet, dispatched to investigate the lack communication from multiple worlds in the subsector containing the Valcetti’s Salvation system, discovered substance to the rumors of a mounting Ork Waaagh. Following the events at Salvation’s Gate the Ork fleet was pushed deeper into the subsector to regroup while the Imperial fleet held their patrol line in the outer reaches. The Eldar and Chaos factions continued their nefarious plans and expanded to a second subsystem – the Eldar moving interior to the isolated and unpopulated worlds of the Accursed Demesne for reasons beyond our measure. Meanwhile, the maligned forces of Chaos appear to be solidifying their holdings within the Foundling Worlds and are positioned to come into  conflict with the Eldar.

The Imperials won the first engagement of the war, securing a narrow victory over the Ork vanguard fleet. Forcing a retreat, the Imperial fleet interdicted the space lanes from the Ork core worlds at the Undred Undred Teef – however, their settled mining and agri worlds provided sufficient repairs to the remaining fleet. Similarly, the Imperial fleet was able to affect full repairs. The following changes were recorded: 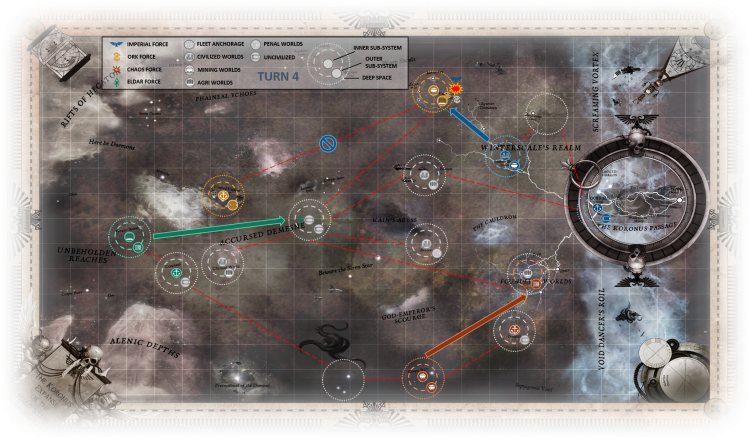 At the end of turn four, the fleets have remain largely unchanged – however, the requisition points have begun to add up and the borders of the players worlds have started to collide – expect that fleets will quickly begin to ramp up! 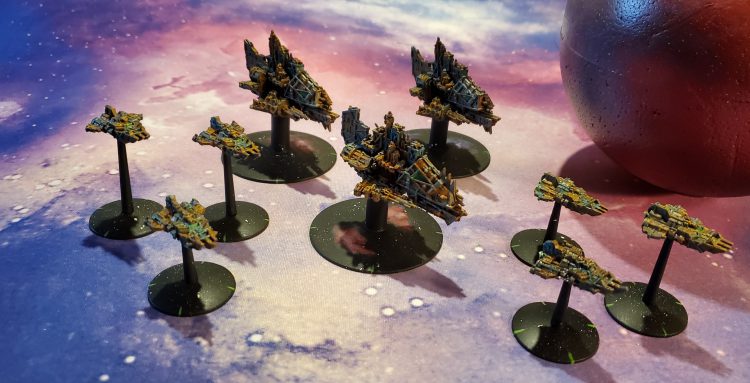 Hunters amongst the stars. Credit: Boon

As we move forward with each campaign update I will also discuss various changes that are being considered or have been enacted since the last update. In the opening moves, a lot was learned that have led to some alterations and potential updates for future implementation.

Both changes were made to streamline the campaign. The former stemmed from a lack of an option to simply ‘do nothing’ if a player determined that to be advantageous. The latter stemmed from a realization that at 100 points per appeal, the points would quickly become meaningless as players would be able to bank massive point reserves. At 50 points, saving for larger purchases comes at a significant trade-off to ship retrofits.

The first change regarding fleet battle capacity was a wholly anticipated change – though it wasn’t certain what the appropriate timing or cap raises should be. The nice thing about the BFG campaign is that even small battles are exciting – a slow cap rise still makes for an interesting campaign given the integrated BFG and 40k nature of it and the caps mostly align with the maximum banked points a player might have with a little bit of wiggle room.

The second change is more unplanned but allows for increased flexibility and tactical choice as the campaign moves into its later stages. It is intended to help facilitate tactical decision making on force splits and provide opportunity for players to both attack and defend – adding a different dimension to the campaign layer and keeping the BFG component fresh in the late game.

Similarly, the final proposed change is less well fleshed out, but the desire here is to increase the tactical considerations and create a bit of tension in choosing targets and competing against other players for more than just pure conquest. The specifics of the missions will likely be story driven, randomized for each player, and enacted all at once in the early-mid campaign. Similar to the fleet marker splits, its hoped to increase tactical choice, and provide a sense of building to a finale when the initial campaign would have otherwise ground to a boring stalemate. More on this one in the future.

That’s all for this update – we’re excited about the future of the Expanse and the war to come! Soon we expect the 40k Crusade armies to weigh as fights over worlds ensue. We’ll also look to begin implementing campaign changes that facilitate win conditions, tactical consideration, and narrative engagements!