Month ‘2’ is done and dusted. Lets just continue to ignore the fact that we are 18 days into september due to the retro marines project, the fact 2nd Claw’s rhino isn’t done yet and roll right into the first 5 warp talons. Also I’m happy that my insane pile of potential backlog is slightly smaller than it was a few days ago!

There is a absolute ton of things I’m not happy with these guys, so much so that I nearly simple green’ed them halfway through but I’m going to elected to focus on the good.

Oh sweet mercy these 5 guys gave me so much trouble.

So here they are. The models that almost broke my drive to do a night lords army thanks to their trim and the army theme I wanted to bring out with them. Thank god I only need to *checks notes* do another 5.

And the sorc lord with jump pack. 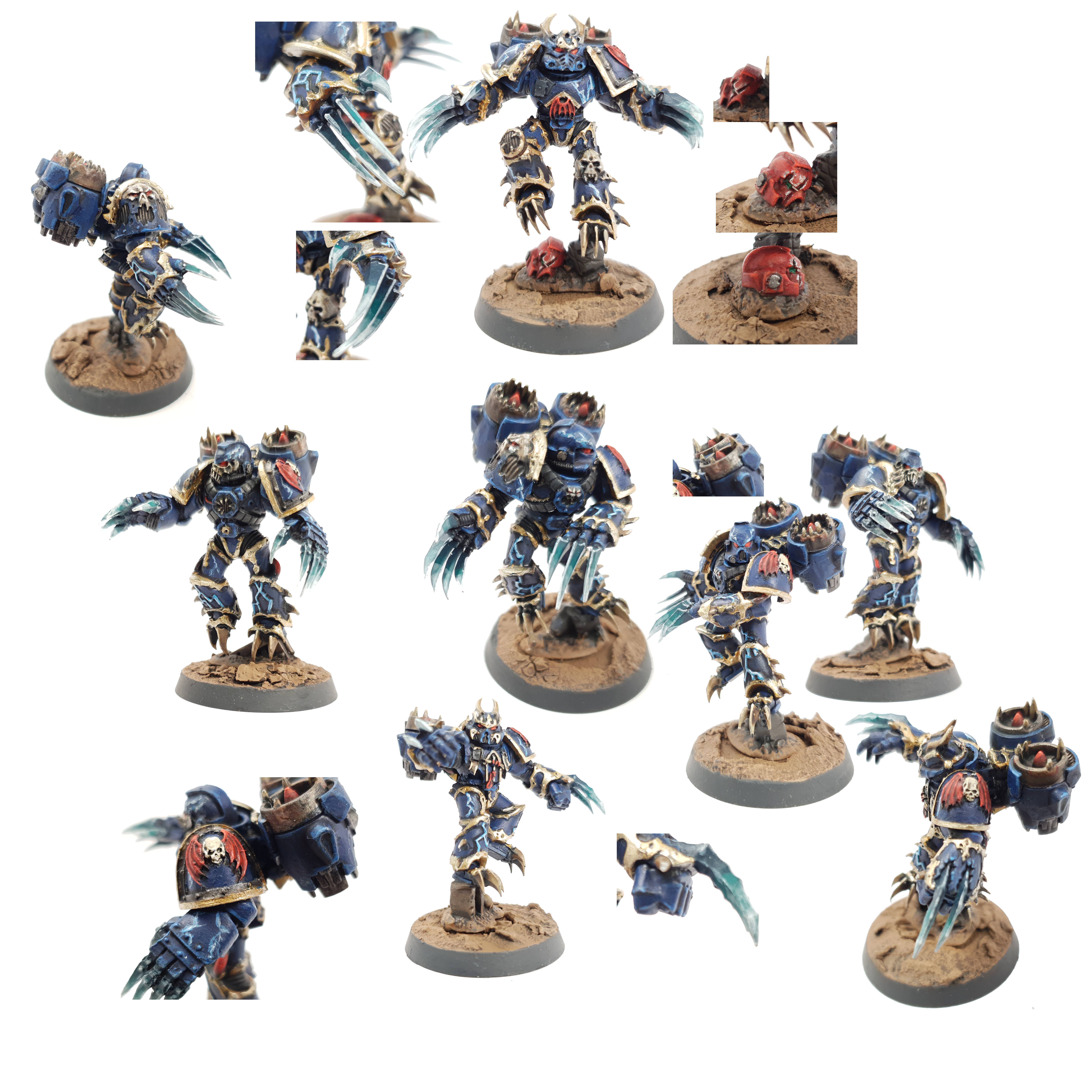 I’m fairly happy with the basic line trooper warp talons. The sarge on the other hand…

So I wanted to tie these jerks into more ‘chaos-y/corpse emperor worshiping corrupted’ side of the army theme, hence going heavy on trim and mixing in less FW hersey bitz and bobs.

This is reinforced by painting the little spikes on jump packs as teeth with gums starting to form out of the metal, along with bone coloured bits featuring more than the red. I also used the raptor shoulder pad and painted it as very pallid flesh, showing the armour warping to become skin.

Very loyal, imperium approved skin if Jax asks by the by. 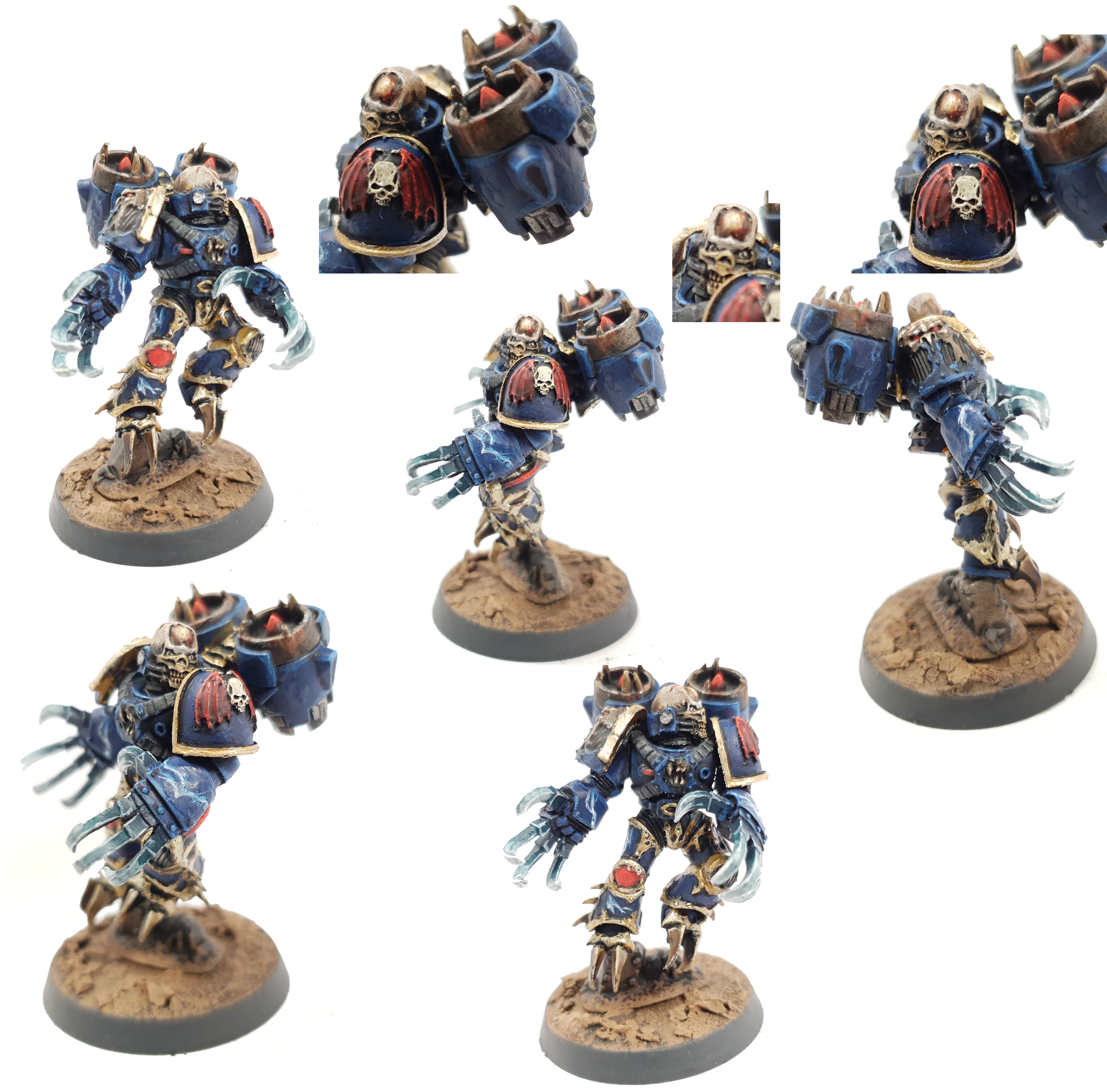 Barring Odafin, the warp talon squad leader Yaz’ar’in is the most corrupt member of Laz’s Lawbringers, falsely worshiping the emperor in public and privately bearing the mark of nurgle.

Yaz’s flesh has been painted to be peeling back to reveal his skull on his face, exposing his skull beneath. His flesh on his lower jaw rotting so much that he now wears a mask to hide his newest physical defect from the more ‘pure’, Jax aligned members of the warband. He is the warbands chief terror weapon and the herald of it’s internal doom. For as long as Yaz’ar’in lives, Jax’s mission to rid the warband of Laz and Odafin is checked and the corruption spreads….

So you might notice a few things are missing. Namely Laz’s runes on the knee pads and the claw marking. This for two reasons:

A: I thinking about doing something special for Odafin’s “finest”. Also raptor kit blank knees are rare and require more thought.
B: I need to paint terrain and the other half of the Swords of Davion Kill Team for the xmas thrill team ham slam. My hopes are pinned on the power of zandri dust spray for this one folks.

So with that in mind December’s mission is a return to finest troops that the Imperial Davionic Republics have to offer. Hopefully I can knock them over before xmas!

Check out the rest of my night lord ramblings here:

40k chaos Coda is cool and good night lords or is he? Painting Tale of the Goony Gamers wargoons