Now that Covid is “Officially Over”, I decided I should start going to AoS tournaments, especially since I now have a 2000 point army and have played a double digit number of 2000 point games (I think?). I was meant to go to the same tournament as Ellarr, but it turns out there were pretty much two tournaments in Leicester within a fortnight of each other and I booked the wrong one, oh well!

The venue was fittingly named…the Venue and is pretty much a huge event hall. It was changed around a month before the tournament and it was definitely worth it. If they hold another event in Leicester, I hope they do it there.

So it turns out that the core of my army is Carrion Empire (which is out of print) and the Skaven Vanguard (currently for sale!) box stapled together, except the Warlock Engineer in the Doomwheel decided to get out and walk, alongside the following couple of changes:

– An Arch Warlock showed up and brought his posse of 15 Acolytes, a Ratling Gun and a Warpfire Thrower.
– Grey Seer totally insists that he can summon a Warp Lightning Vortex and it’s still useful in 2022.
– Gnawholes, since they are free.

My basic gameplan is to sit in the corner and just annhiliate anything that comes within 18-24 inches of me. Meanwhile Clanrats sneak up the board and cap/do objective play, with the Skitterleaping Grey Seer helping as well.

The list is kind of in a transition point anyway between “Stuff I have” and “Things that will win games while still being sorta fluffy”, and just off the top of my head I probably want more Clanrats (one unit of expendable garbage feels sort of paradoxical) and possibly Lauchon. My initial thoughts are dropping the Grey Seer + Spell or the Acolytes. (Note: lol, lmao)

So I haven’t actually done an AoS Tournament before. I did a couple of 40k tournaments in the late 2010s (run by Corrode), where I went…1-4 and 1-4. I then played as a stand-in player at the GHO this year, where I also lost the one game I played. Meanwhile I tried out this list at my local store…and died on Turn 3. On the bright side, I did come 2nd in Armies on Parade.

Basically if I don’t go 0-5 I’ll be pretty happy, and if I go 0-5 apparently I get a “Wooden Spoon”, I’m hoping it’s not a literal wooden spoon but oh well.

In the end, I ended up getting monkey’s pawed here, I went 1 win*, 3 losses and 1 draw, putting me technically on 1-3-1. I’ll go more into what happened later on. 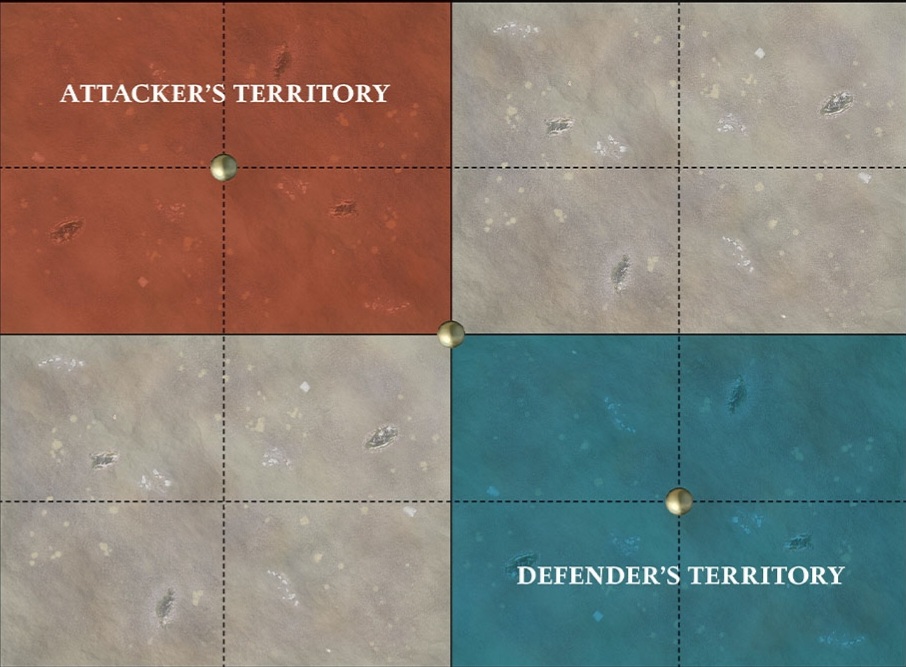 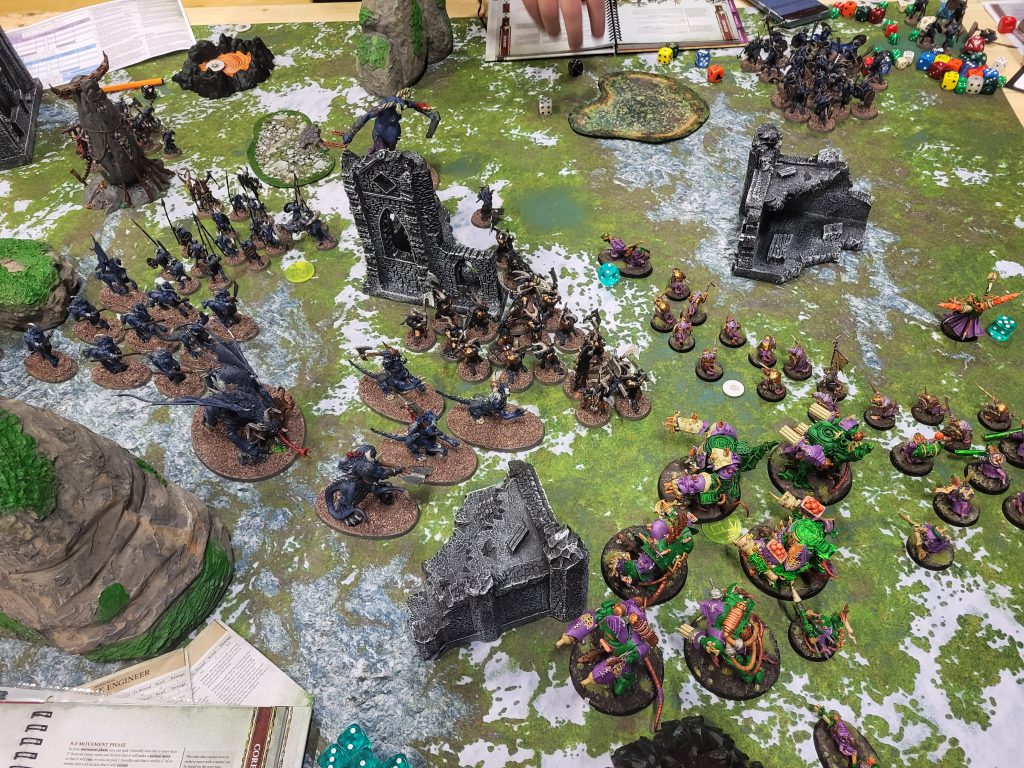 A Beasts of Chaos army with a lot of monsters and Gors! This was probably the oddest game of the entire tournament. It basically boiled down to a massive fight right on my prime objective, which meant a whole lot of Holding 1.

While I was killing stuff and doing my battle tactics I wasn’t really able to safely break out. Part of it was that I was waiting/hoping for a double turn that didn’t come which would allow me to gain some sort of momentum. A Jabberslythe also causing most of my Acolytes to kill themselves didn’t help either.

Either way, the game was very fun and my opponent was extremely enthusiastic and willing to explain the strange Beasts of Chaos stuff.

Game 2 – Chris Riley (Bonesplitterz) – The Mighty and the Cunning 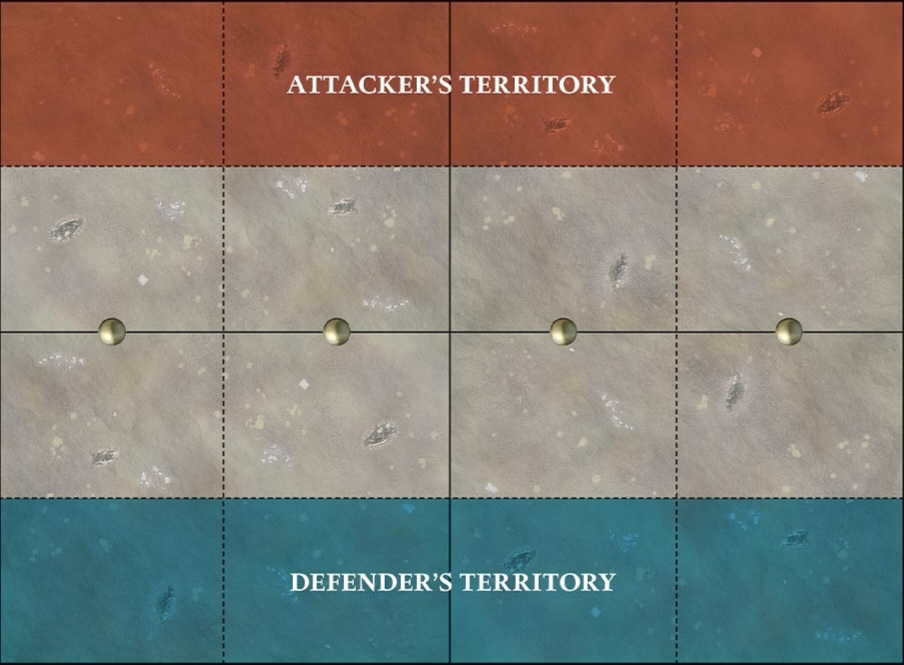 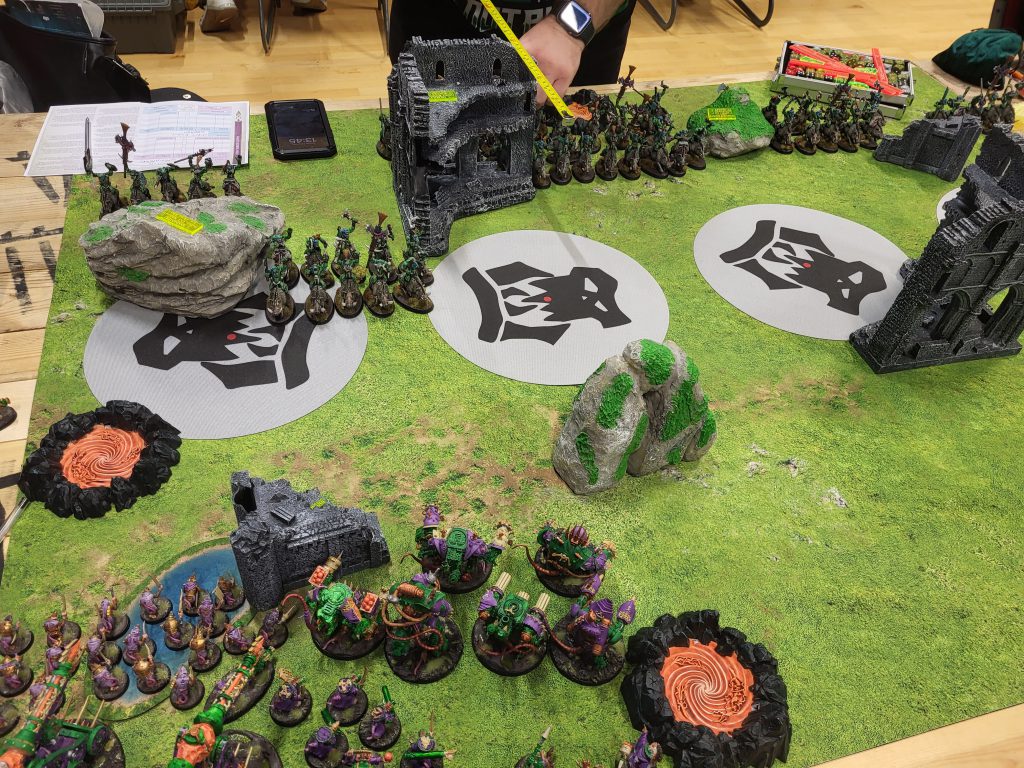 I managed to deal with the first wave of mounted Orcs (while other Orcs just ran around and capped every other point on the board). I managed to somehow score Gaining Momentum on Round 4, then proceeded to get tabled.

The highlight of the game was when I thought I’d be sneaky and have my Grey Seer Skitterleap to cap a point, without realising there were literally 5 Orcs behind a giant rock while still on the point. 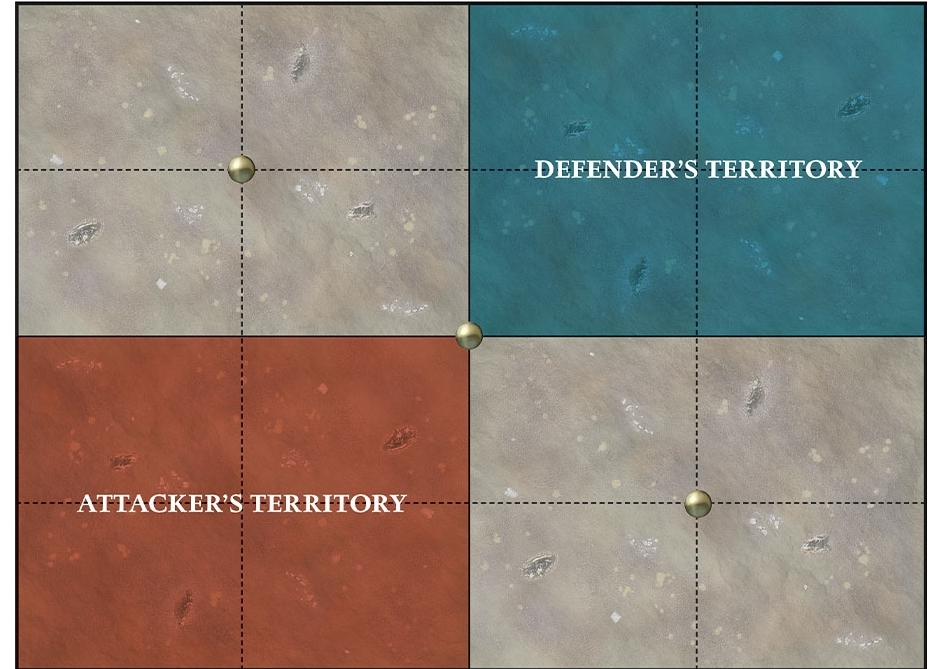 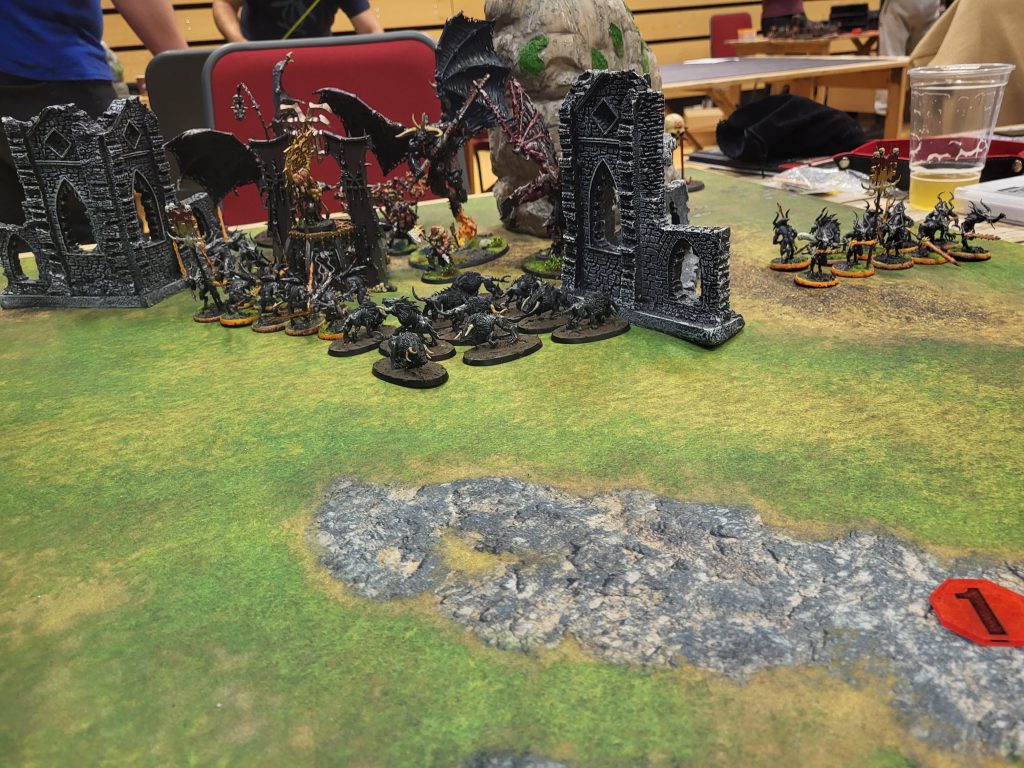 My third round was against another melee army. At this point there was literally no magic at all, but a ton of dispelling and general ‘scary Khorne’ stuff, including 3(!) Bloodthirsters. In this case, sitting back, slowly moving forward and just killing everything that wandered into the death zone kind of actually worked.

All three Bloodthirsters didn’t come in at the same time, which obviously let me kill them one at a time, also the fact my Grey Seer just got to teleport to the back lines and put down the world’s most annoying Warp Lightning Vortex really helped as well, the amount of damage it put out over the game was actually kind of amazing to be completely honest.

The game ended up as a total draw. If it had gone on for a round longer I would’ve won, and if it was a round shorter I’d have lost, kinda neat. 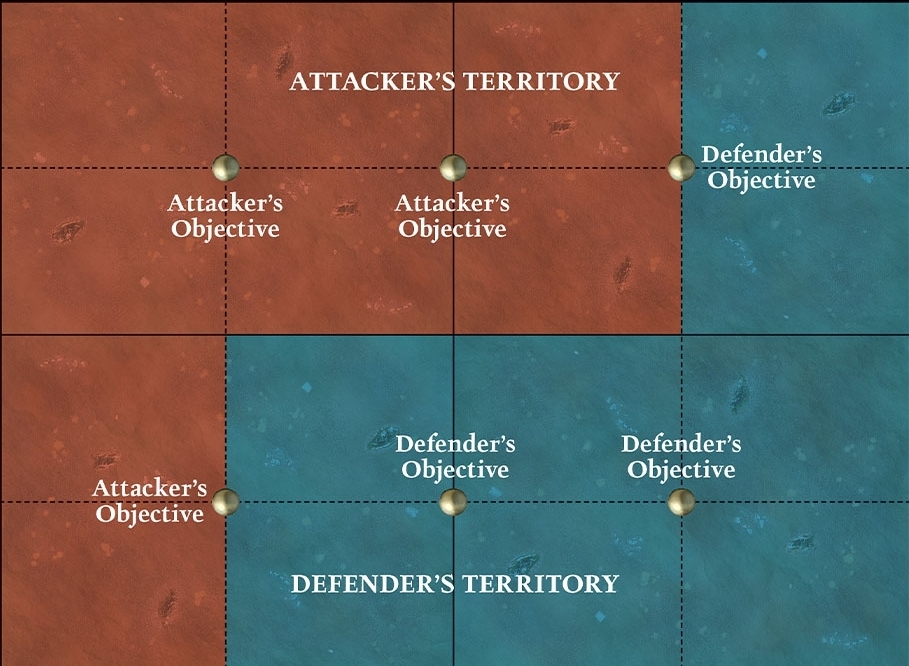 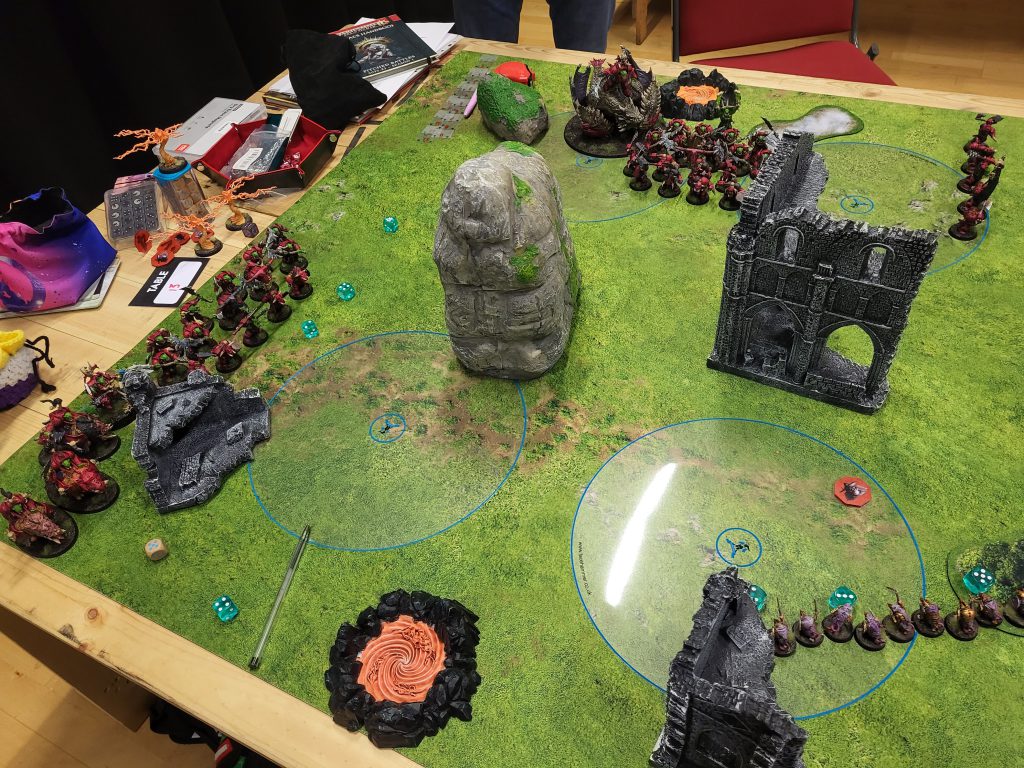 Get to Da Choppas

Whoa, four melee armies in a row! I’m dodging Order and Death armies like Neo dodges bullets. This was a pretty neat, Predator themed Ironjawz army, with a cute banner as well.

Maybe it was because I was slightly more aware of what I was doing, and he was terrified of my shooting, but I did get to go out on the board a fair bit more. Things were going fine until a 6″ redeploy at the top of round 4 allowed two squads to move out of range of both my Stormfiends and Acolytes (I’m not mad, do not put in the article that I was mad).

Annoyingly we had to call it during round 4 and at that point the lack of sleep and minor tilt from that Redeploy had me insist on just calling it as a loss for me. 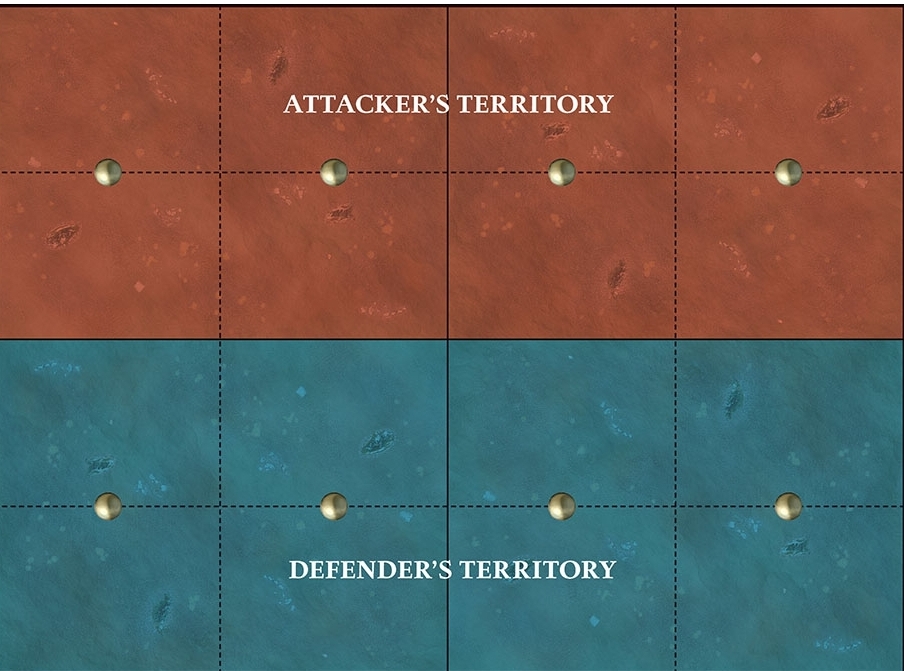 So I got a bye due to both an odd number of opponents and being completely last. Since there were no other games left and I didn’t really want to hang around just so I could possibly get most sporting or something along those lines, I just headed home early.

Every opponent was really, really nice. I didn’t have a single issue with any of them, the judge was helpful the couple of times I had to ask a rules question and the players were cool with it since it functioned more as a “I didn’t know that.” rather than a bunch of angry rulebook pointing.

Hotel was good, the the food was good, I also got to meet Sexiest Man Alive One_Wing.

People thought my army/kitbashes were really cool, it’s a shame my ego was completely wrecked and as soon as I entered the venue I saw a guy who’d weathered the toenails of his giants so I assumed I had no chance to win best painted and didn’t even enter.

Clocks weren’t a thing for AoS, but they were for 40k. I found that odd, personally. Just an observation.

I think the practice game I played completely and utterly traumatised me so I flat out pretty much never left the corner I’d camped in until like Turn 3 at the earliest, it was almost like I was terrified that 4 gargants would just appear from another board, walk 23″, double turn me and kill everything. This pretty much meant my opponents had free reign to just send up their trashcan garbage units to cap points, while my single unit of clanrats was ‘screening’ for my Stormfiends, which could probably take a blow or two.

Anyway, going through the units and what I thought about them, and then what I’d change.

To keep it pretty brief. The Grey Seer, Warp Lightning Vortex and Gnawholes were all really, really good and useful, they all made players have to react to them and ‘waste’ units on them. The only thing I might change there is to also take Vermintide to make the Grey Seer even more of an annoying shithead. I need more Clanrats in general, they were good at what they did but I need more of them so I can both “protect things” and “cap objectives”. The Acolytes are likely to stay now, as are most of the heroes, though I’m likely to change my Grand Strategy from Warpstone Weaponmasters since at least two of my heroes are very, very likely to die.

The weapon teams were interesting. The Warpfire Thrower was ‘really funny’ and also useful, while the Ratling Gun, based on what it seemed best at, could and should be replaced by a unit of Clanrats.

The Stormfiends will stay since I think I was using them incorrectly. I feel like I need to be more assertive with them, keep a unit of Clanrats in front, and just park them as close to the middle of the board as possible and just crap on everything. The Warp Lightning Cannons on the other hand just didn’t feel very fun. Since we need a supercomputer to work out how efficient the Warp Lightning Cannon is, I’ve asked the nerds at Hammer of Math to compare the 3 Skaven artillery pieces and how efficient they are. Once that happens, I know what I’ll do properly, but already I’m considering adding Vermintide and hopefully another unit of Clanrats, and cutting the Ratling Gun and something else.

I was really, really good at doing my Battle Tactics, I only really failed on 4 total (out of 20), one of those was because “my Stormfiends did too much damage (so my Grey Seer couldn’t charge and get on an objective)” and 2 of those were because “The game ended”. My army is good at grabbing a bit of terrain (Gnawholes count!), trading units, killing monsters in the shooting phase, and having my Galletian Veterans or general kill something.

I was absolutely awful at holding points, my rough average over the 4 games I played were: 1 (out of 3 objectives), 1 (out of 4), 1 (out of 3) and 3 (out of 6). In comparison my opponents held 2,4,2,4, so I was just bleeding points constantly, especially from hold more. Basically I need to either be more assertive with the Stormfiends/Acolytes and hope the artillery can look after itself, or just get way more Clanrats and turtle but not really. Game is hard.

In conclusion, I should focus more on playing the mission rather than JUST the battle tactics, I’ll switch the Ratling Gun out for Vermintide (since I seem really good at placing things in the most obnoxious places ever), and I’ll see what I can do before the next event I go to, probably in February.