Conquest Focus: Let me Extus you a question

Extus, Oriq Overlord is a pretty cool Commander option with a lot of flexibility in how you build around him. You can do an aristocrats-style sacrifice deck, focusing on sacrificing either cheap creatures and triggering death effects with old standbys like Zulaport Cutthroat. You can also try to generate infinite mana, and cast your Commander sorcery over and over, destroying your opponents’ board states and dropping a ton of Blood Avatars with damage on attack triggers, and if you’re lucky, haste enough to just end the game.

But I thought it would be interesting to try to do something a little stranger and perhaps more difficult; something definitely a bit less reliable. I wanted to make an Extus punching deck. “One punch” decks often suffer from an inability to close out the game because they have to throw their hand away for buffs to take someone else out of the game. In a sufficiently punch meta this can result in two one-punch decks each taking out the non-one-punch decks, and then facing off. These decks can also incorporate additional turns or additional attack steps as a way to actually kill all of their opponents. The beauty of additional attack steps is if you’ve buffed your commander and perhaps dropped a Silence then you can keep using those buffs and that silence on your next opponent, and the next. 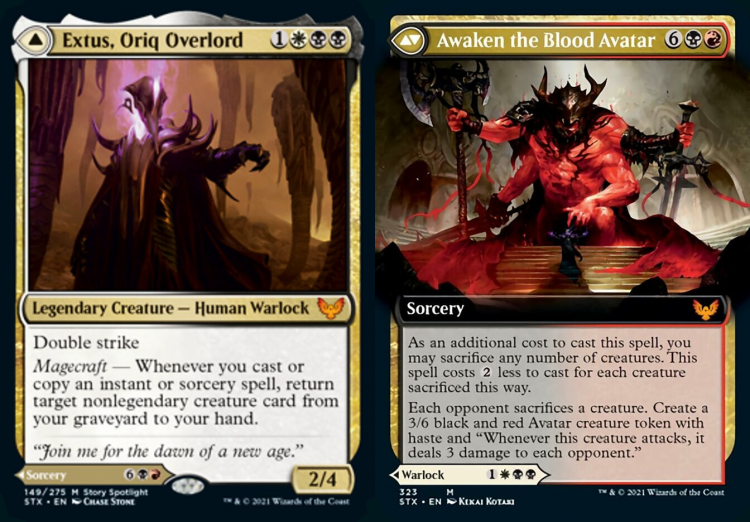 Extus almost inexplicably has double strike, which is quite a useful ability for a commander to have. In Conquest that means you need to get him +4 power in order to straight up kill someone. In Commander you need to get +7, which is significantly more, but still achievable. Thankfully in their infinite wisdom at some point in the past WotC mostly abandoned the traditional color pie, and as a result has given Red has a number of solid temporary buff spells. Black has always had spells that buff power only, but they frequently have an x cost involved, either in life or mana or sacrificed creatures, but post-PlanarChaos Red has some solid +3 power or +4 power spells.

There’s also an extant, mostly forgotten, ability (because it frankly wasn’t that strong) from Gatecrash that we can make use of called Bloodrush. Bloodrush essentially lets you discard a creature card for a buff, generally tied to the creature’s toughness or power and perhaps any combat abilities it had. A creature with Trample and bloodrush will probably give the creature you use the Bloodrush buff on Trample, for example. But for Extus this creates a really neat interaction – since Extus can get your creature cards back out of your graveyard as a Magecraft trigger on casting an instant or sorcery, you can essentially recover your buff spells from your graveyard to cast them again and again.

Unlike most traditional one-punch decks you won’t automatically run out of steam with Extus here; that’s because you’ll recover your spells as you punch people in the face. Your ideal scenario with this deck is to drop a cheap creature or two, sac them to rush out Extus, buff him and then go to town, hoping to pull off an additional combat. The mana for that can come from cards like dark ritual, infernal purge, or from Neheb, the Eternal secured by a silence effect like Revel in Silence, the modal face of Flamescroll Celebrant, Grand Abolisher, or your Conquerer’s Flail. To pull of a win like this you’ll have to judge your moment fairly carefully – you can’t just immediately jump someone – but the setup makes it more similar to a combo deck in some ways; you need to assemble your pieces before trying to end the game.

The creature return ability means you can safely ditch creatures with red’s draw/discard spells as you cycle through your deck. Also, the trigger timing of Extus’ Magecraft ability is really important to understand. If you sacrifice a creature to Culling the Weak, the cast trigger will go on the stack, but part of the casting cost of culling is sacrificing the creature, which means the creature will already be in your graveyard, which means you can return the creature you just sacrificed. There’s possibly room in this deck to switch up your cards a bit and include mainstays like Birgi, God of Storytelling and Storm-Kiln artist.  A deck rebuilt this way would probably feature even more card selection, attempting to build up treasures or mana via spamming through and discarding, gaining lots of card advantage from the discard and returning of creatures.

I find Extus really interesting, and much like with Jorn I really hope this tri-color modal dual faced legendary creatures keep coming out, because they allow for really interesting commander and conquest decks, and I think this is one of Wizards’ most sucessful new card design themes in a while. I think it’s safe to say I’ll be revisiting some of the other possible versions of Extus over the coming weeks.