Let Us Now Reign In Terror, Together

Well well well. We’ve had a few false starts along the way, but I have a good feeling about things this time. I did before and I was disastrously wrong, twice, but this time it’s different. Things are going to work out for me, and for you, if you are brave enough to come along with me on this journey.

What does Arks of Omen mean for The Meta? Who cares, not me. That is simply not my problem. In situations like this I think of a line from The Magnificent Seven, when Calvera has captured the cowboys and orders them to leave town or get murdered. One of them, I think Steve McQueen, asks him what he’s going to do to the villagers if they take him up on his offer, and he says “what happens to these people will happen to them whether I kill you first or not”. Don’t go out there and give a shit when it’s not your turn, is the main idea of that movie to me. Lot of dudes got shot trying to fix what wasn’t their problem, I think is the moral.

The changes here, the reason I’m putting the Tau back on the shelf, come from a couple of spots. One, the Dark Angels FAQ for Arks of Omen does the obvious and necessary thing by making the First Company detachment rules work in the new format. That’s good. Two, in the dataslate marines lost Armour of Contempt. That’s bad. Three, most wargear is free now. That’s good.

I read those documents in that order, and it was a whirlwind of emotions. Seeing the dataslate first I thought my big beautiful sons were dead meat ground up into chunks. Coupled with the points changes, I now think those chunks have been reformed into delightful meatballs. Perfect round little guys, ready to pop into a sandwich and eat it over the table, dripping marinara and provolone all over your opponent’s army. Shouting at them, around a mouthful of hoagie, to get that weak shit off the table and bring me a napkin.

It is perhaps time to revisit the Least Army. The goal there was simple: to prove that if something is stupid but it works, then it is not stupid. I’m not sure we succeeded, but we tried. At any rate, the game has changed notably between Belial and Forty Terminators and the present day. For example, it’s Fifty Terminators now.

Yes, losing Armour of Contempt sucks. You know what didn’t benefit from it anyway? Thunderhammer/Storm Shield Terminators. You know what’s free now? Thunderhammers and Storm Shields. Free wargear makes them insane, because shit like a unit of 10 TH/SS Deathwing Terminators with 2 Cyclone launchers that used to cost 480 points runs 330 now (side note: unfortunately, guess what terminator model I don’t have any of). You can, if you wish, do this three times, until you run out of Deathwing squads. You will have spent 990 points. That is obscene. 30 Terminators was almost your entire list. It’s half of it now.

That leaves more than enough points on the table to add Big Azrael (peace be upon him), and the other support guys (Ravenwing Chief Apothecary, Terminator Ancient with the Pennant of Damage Reduction) that make the list click, and still splash in another 15 or 20 more Terminators, from the Relic or Assault or Regular Terminator datasheets. Above all, this makes list building insanely easy. Since Dark Angels can freely mix their weapons, and all Terminators are 33 points, you just count them up. Take 3 Model for each 100 Game, drop them into a big bag, and you’re done.

Some of the above works for any marine army, but as usual I don’t care about those chapters. I care, always and only, about Dark Angels. This is because the other marines are mark-ass loser dorks. It’s also got to do with Dark Angels being the only ones with the correct relics and characters. It brings me no pleasure to report this, but all other space marines can go directly to hell. They probably have some good units or whatever, which might bring them some solace while they burn for all eternity, but they know what they did and they know they deserve this. It’s their fault. Your path to redemption, the only way you yourself can avoid the lake of perilous fire, is to suddenly have Dark Angels. Take whatever marines you can find, and simply declare that they are Dark Angels now. It’s that easy. Just say the words. Type them into BCP. You are one of us now.

But maybe you don’t want to run Terminators, because you have Problems. If so I am sorry for whatever you’ve got going on, but we have other options. With the changes to Doctrines that allow for sitting in Devastator all game, Ravenwing bikes and Black Knights can zoom around 23 inches (base move of 14, plus 3 for the doctrine, plus an auto-6 for the advance) with a 3+/4++. You’ll be hitting on 4s, but that’s what Sammael is for.

Regular non-winged angels aren’t in a bad spot either: Plasma Inceptors are kind of like a 40 point Crisis Suit, which isn’t even a unit they let Tau have anymore. Weapons from the Dark Ages can juice them to S8/AP-3/3dam, and at 40 points each they’re practically disposable. Imagine unloading 10d3 of those shots on a knight or something, melting it to the ground, and laughing while you die. Incredible power move, easily worth 200 points. 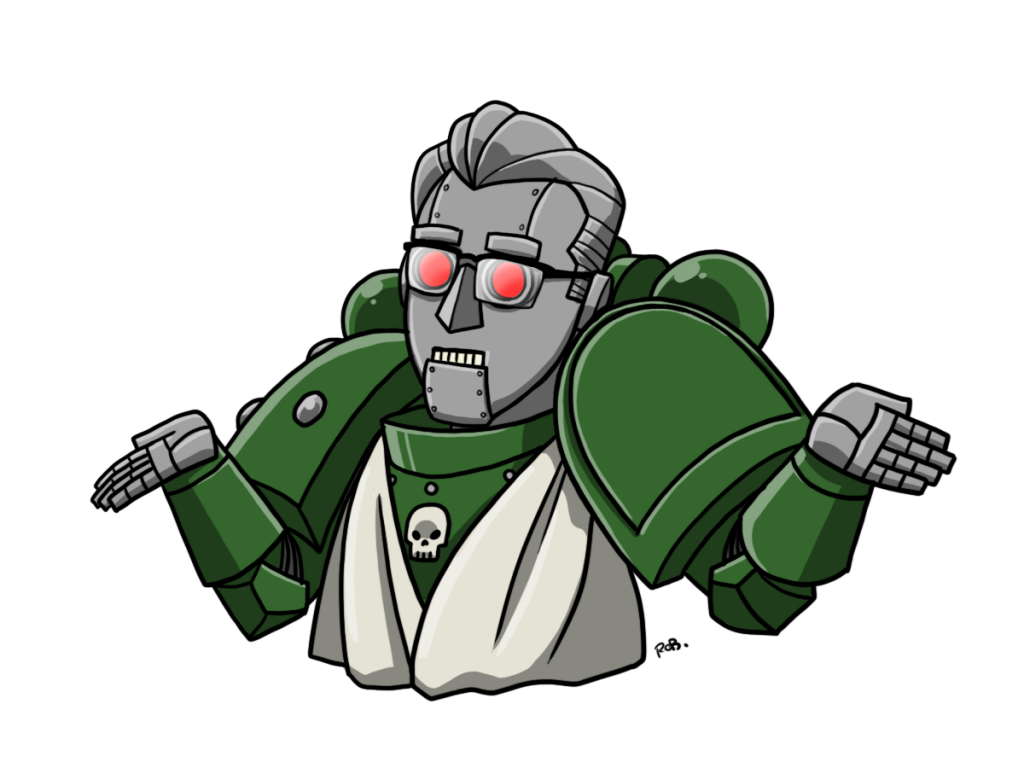 This is it. It’s gonna happen this time, I can feel it. It is time for the Reign of Terror to begin. I know I said I’d be running Tau for the foreseeable future, but here’s the thing: no. Tau suck ass now. They’re busted. Broadsides still aren’t CORE. But Dark Angels are good, so they’re my new friends. You may think this is hypocritical, or accuse me of flip-flopping or meta-chasing. I do not care. This is why I have two armies in the first place, is so that if one sucks I’m not stuck with it.

Dark Angels aren’t the best army. They probably aren’t even the best Space Marines. They are, however, currently the best army I own. My warhammer time is strictly limited these days, and god help me if I’m going to waste it pushing trash around a table and getting obliterated, when I can avoid it. I see no shame in this, only glorious victory. It is not my job to lose games, despite how good I’ve been at that. I’m going to carelessly slam 50 Terminators on the table and hit things with hammers. It will be cool.

Based on our reader polls and website traffic, you probably also have a space marines army, and this is as good a time as any to either paint it green or lie about painting it green, and get on the bandwagon while the getting is good. You can play Iron Hands too, but I won’t respect it.