Spoiler Warning: Full plot details of Be’lakor (and major events from Morathi and Teclis) are below. If you want to wait to read these yourself, turn back now.

Last weekend we discussed the rules sections of Broken Realms: Be’lakor but the true star of the show of Broken Realms has been the storyline. Campaigns in Warhammer are notorious for being very stagnant, in which not much changes and it usually ends in a stalemate where both sides lick their wounds but nobody really lost. Morathi shocked many players by completing a long running storyline that results in Morathi becoming the goddess she aspired to be. Teclis killed off Arkhan the Black and left Nagash, the most powerful villain of the setting, heavily weakened and leaving a power vacuum for someone else to seize instead.

How does Be’lakor’s plot hold up? Read on!

The book opens with a monologue by Lord Kroak, the most powerful of the Seraphon. Musing that Chaos has the potential to undo even The Old Ones plans if not kept in check, Lord Kroak hatches a plan to weaken Archaon and Be’lakor before they can ravage the Mortal Realms.

The book snaps back to the middle of Morathi. When Morathi left the Stormcast Eternals to die during the raid on the Eightpoints, some Stormcast managed to successfully rally and fallback. Gardus Steel-Soul of the Hallowed Knights leads his comrades-in-arms to a realmgate of Ghyran. Unfortunately they are confronted by Daemons of Nurgle immediately upon stepping foot within and must fight another battle for survival. Their saviors seem to come in the form of Seraphon over the hill, but they charge past the Stormcast into the portal to the Eightpoints, leaving the Stormcast to fend for themselves. Gardus prepares to fight with a Great Unclean one before meeting an ignominious end being crushed to death in the hands of the Greater Daemon.

Kroak ordered these forces into the Eightpoints and they had more important plans than the fate of some Stormcast. The Seraphon forces marched across the Eightpoints, suffering as few casualties as they could avoid in order to reach the Silver Tower of one of Tzeentch’s nine Gaunt Summoners, Tome Eater. The Gaunt Summoners are Tzeentch’s most powerful wizards and their magics could disrupt the very balance of the universe itself. The Seraphon lay siege to the Silver Tower and while Tome Eater feels that they could never successfully destroy the tower, breaking inside is a real possibility. He enters the inner sanctum of the tower to cast a ritual that lifts the tower off into the stars itself, leaving the battle between Lizardmen and Tzeentch daemons to rage below them.

Lord Kroak, ever the planner, was waiting for Tome Eater. His flagship Ziggurat was ready about the atmosphere. With a charging of their main cannon they fired upon the silver tower, knocking it back down to the earth below, this time to Chamon. Kroak anticipated this yet again and had prepared a squad of Seraphon to intercept them when it hit the ground. Another army of Seraphon, largely filled with Stegadons and their riders, were ready with Engines of the Gods and beams of light that can cut through the tower. Much to the shock of Tome Eater, these lasers did have the arcane force to break through the weak outer shielding, and annihilate him in a single blast. One of Tzeentch’s finest casters was dead, and so was the core of the tower. The Tower went Critical and sent out an arcane blast for miles, eviscerating all living things Seraphon and Tzeentch daemon alike (GREGNOTE: ENGINE KILL!). The Old Ones plan was left intact. 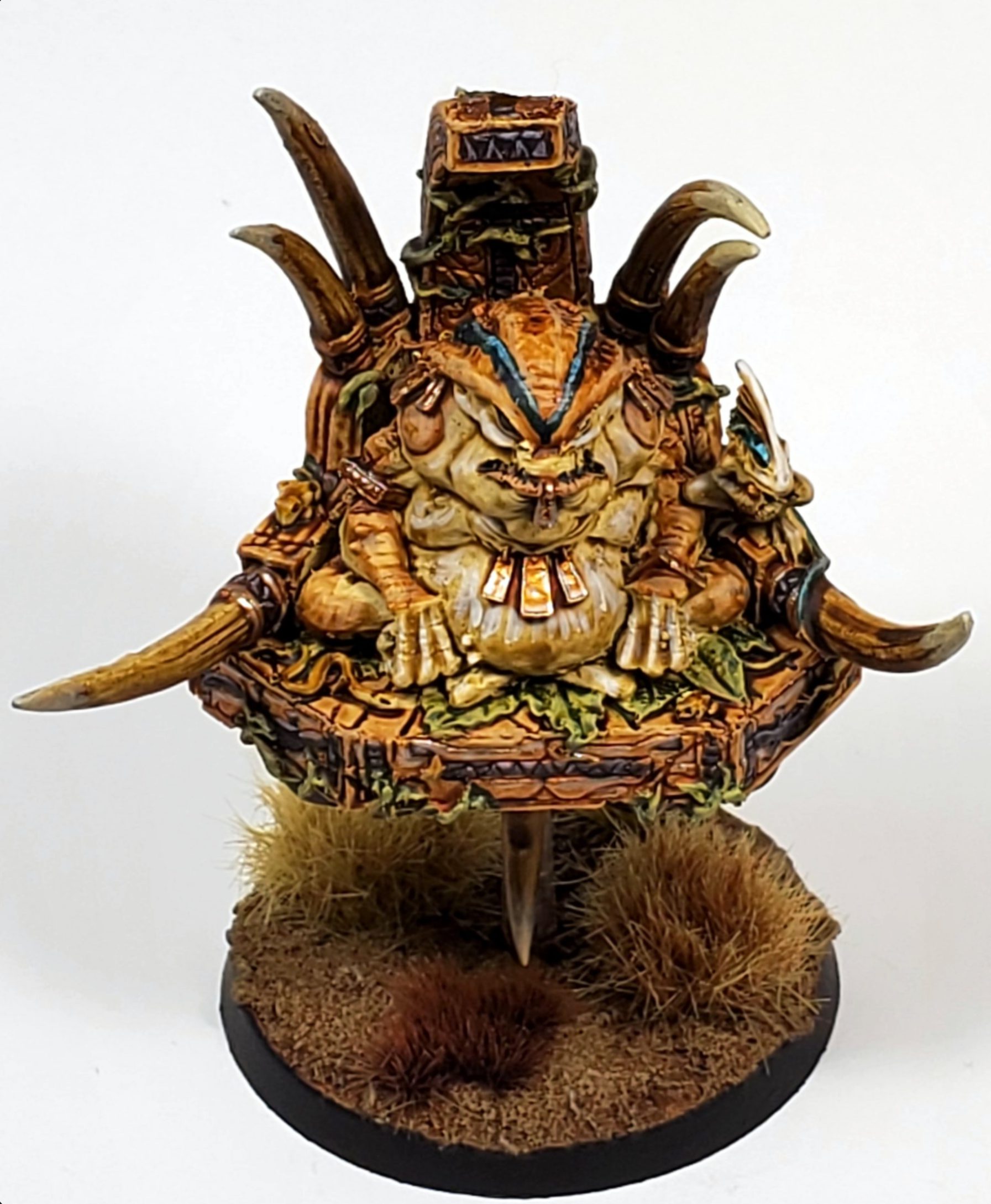 Part two opens with Be’lakor musing over recent events. The destruction of the Silver Tower gave him an idea that could be used to prove his worth to the Chaos gods again, even beyond that of Archaon. He could not execute the plan alone, however. He had an ally in mind. He fought with Lady Olynder during War of the Everchosen and when he stabbed her with his fell blade she cursed him, and he knew it was only a matter of time until the Nighthaunts came for him. He concocted a plan to delay the curse and led an assault on her castle in Shyish, with Daemons of all stripes in tow. When he got to the castle he found in the crypt below the only way to permanently kill Lady Olynder, to destroy her flesh and blood body. He offered her a deal in exchange: if they cooperated, then she would defer his curse and they could stop Sigmar’s chosen. Reluctantly, Olynder agreed.

Be’lakor’s target would be the realmgates around Chamon. Now severely destabilized by the explosion that surged from the Silver Tower, it was a simple matter of leading the troops into the gates and inflicting the final blow that would collapse them for good. Lady Olynder and Be’lakor both led their forces to destroy the gates, but one was particularly hardy and well guarded: The Gate of White Gold. Once all the gates were eliminated Be’lakor’s enemies could not hope for reinforcements to save them. The mortals may have held out in their defense of the gate if not for Be’lakor working with the Skaven to rig an explosion in a second Silver Tower. It caused the last bit of collapse to the gate that Be’lakor needed. Be’lakor created an arcane cloud above that blocked out the sun, and blocked the souls of the Sigmarite Brotherhood from being returned to Azyr to be reforged. Be’lakor wiped them out to a man, destroying the last realmgate and the Stormcast reinforcements within the region He would lead a protracted siege against the hardy denizens of Chamon in the massive city of the Vindicarum.

Olynder makes it clear to Be’lakor that his curse has been delayed, but not dispelled. He was able to buy himself a bit more time to accomplish his mission.

Meanwhile, Gardus’s soul ascends to the heavens but does not return to Azyr as he expects. He meets Kroak in the celestial plane, who does not speak but can still make his intentions all too clear. Kroak shows Gardus the ruinous fate that awaits the realms if he fails. He conveys to Gardus the urgency in making his way to Chamon to fight Be’lakor. Kroak returns Gardus’s soul to his body, without needing the dangerous task of reforging and Garuds understands his purpose. His men successfully defeat the daemons of Nurgle with the assistance of another Chamber returning from Eightpoints as reinforcements. Gardus tells the Stormcast to prepare themselves for war.

The story reaches its climax. Gardus tells the Hallowed Knights about the Seraphon prophecy and not one turns away from the mission. The Hallowed Knights teleport in, but due to the arcane cloud over the city they teleported in to Chamon and entered the city on foot. Gardus mustered the defenses he could but without reinforcements the battle seemed hopeless. Indeed when Be’lakor and his legions did arrive it was was a blood bath, the Vindicarum was doomed from the start and Be’lakor almost effortlessly carved past their defenses. With the arcane cloud above, no reinforcements can arrive and fallen Stormcast could not be resurrected, their bodies lying upon the cursed ground. Eventually Be’lakor breaches the walls and challenges Gardus to a fight. Gardus stands no chance and is saved at the last moment by the Kharadron Overlords.

The Khadaron Overlords saw the threat Be’lakor posed to Chamon. Surely, they cared more about profit than the human lives at stake, but it mattered all the same. A thousand ships, uniting all the great clans together flew above not a second too soon, shredding the daemon armies with their cannons. Be’lakor is forced to make a retreat at his moment of triumph, his victory squashed.

Gardus reflects on the situation, that the Vindicarium would never be the same. The last few daemons would need to be rooted out, and there was no telling how large the damned sky was. He ponders that it might even extend to other realms, as reports had been heard from smaller towns miles away about a clouded sky.

Meanwhile Be’lakor sulks in his chamber and muses about the loss he endured. Although he failed in his final goal this was no small victory. He destroyed several realmgates in Chamon that Sigmar’s followers use for military and trade movements, not to mention most of the Vindicarum itself. He was such a threat to the the realms that it brought all the Kharadron Overlord clans together for a common cause. Surely that was proof enough he was perceived as a threat. It appears things are going to get worse before they get better.

Broken Realms: Be’lakor might be a slightly jarring change of pace compared to the first two books of the saga. There aren’t any major ascensions or the death of major characters to sum up in a sentence or two, and the changes that do occur feel more like they’re setting up for future events rather than standing on their own. Kroak’s more hands-on approach likely will persist, given his kick-ass new model coming out. Be’lakor’s chaos storm preventing the Stormcast from resurrecting will likely have long-term consequences, and it’s unknown exactly how far it stretches. Finally, Tzeentch losing a silver tower and one of his Gaunt Summoners is no small hit for the Chaos god and will almost surely have consequences.

I do think this is the book I’ve enjoyed the most overall though. It’s the most consistently well written, it moves just fast enough and has a lot of great character banter. I felt that Morathi dragged in the third act due to the climax happening early on and Teclis was bogged down by belabored descriptions of battles. Be’lakor has a happy medium where the battle scenes don’t outstay their welcome, and it is supported by some fantastic scenes of characters bantering with each other that really fleshes out some major characters of the setting. It’s also insane and I loved that they went in crazy directions like a space battle between Tzeentchian and Seraphon forces.

Although Games Workshop has not officially stated as such, Kragnos is looking like the big finale for Broken Realms and overall the campaign has been very worth the time and energy. We are going to do one more thing next week, and look at the narrative section of Be’Lakor as its quite extensive compared to past books, so look forward to that soon!

How have you been enjoying Broken Realms? What are your favorite scenes, or stuff you’d like to see happen? Let us known on social media or at contact@goonhammer.com.