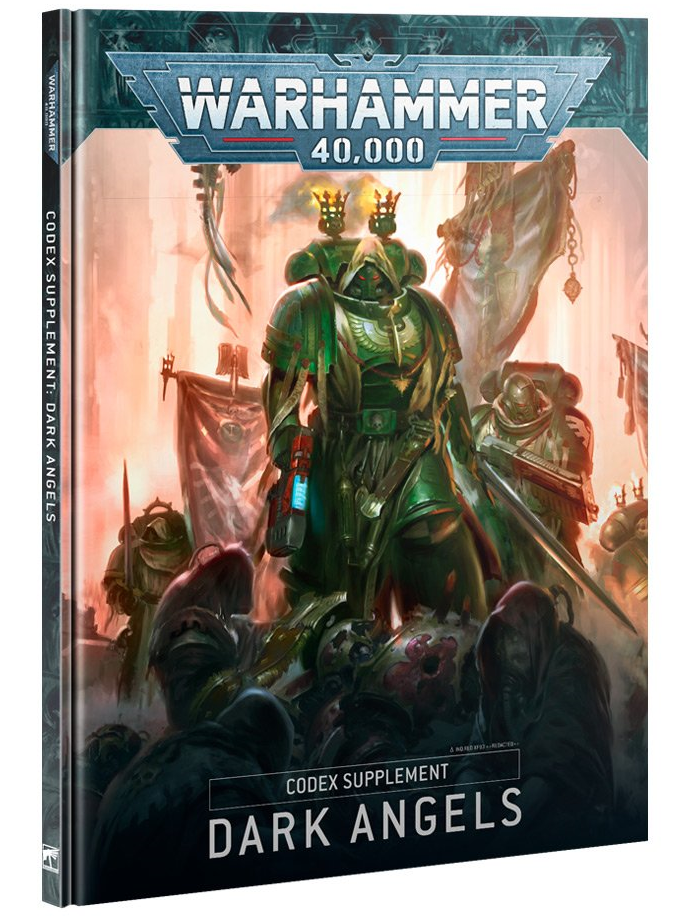 The armies and factions of Warhammer 40,000 are all brutal and impressive in their own ways. As new books release, we dive into the lore presented in each, and how it shapes the fictional universe we love and make war in. In today’s review, Raf Cordero is diving into the lore presented in the new 9th edition Codex Supplement: Dark Angels and how it presents one of the game’s most secretive factions.

The power-crazed maniacal robot with my skull in its grasp would like me to relay the fact that Traitor Dark Angel jokes are overplayed, and has made clear that I am not to insinuate in any way, shape, or form, that the Dark Angels are anything but the most loyal, most resolute, and most dedicated Space Marines faction. He also can’t wait to kick your ass with his army. I’m not even sure why I’m the one writing this other than the fact that writing about the Dark Angel’s lore would take time away from A) building lists, B) running lists, or C) high-fiving about those lists.

Sons of the Lion

The Horus Heresy was pretty bad all around, but for the Dark Angels the trouble was not over just because Horus lay dead. On their home planet of Caliban the rot festered deep. When the Dark Angels forces returned to Caliban they learned they had been betrayed by one of their own. Luther, best friend of the Primarch Lion el’Johnson, had been named guardian of the planet while the Dark Angels fought the traitors. While it was intended as an honor, it bred bitterness in Luther’s heart.

Under Luther’s stewardship, Caliban fell to chaos. Instead of embracing the Dark Angels upon their return, they open fired. Caliban was battled in a battle which culminated in an epic battle between Luther and the Lion. Bolstered by Chaos, Luther fought the Lion blow for blow. When the bonds of brotherhood caused The Lion to hesitate, Luther struck out, nearly killing him. As his former brother lay bleeding by his hand, Luther came to a realization of what he’d done. His anguish rippled through the warp and cased a vortex to open up on Caliban. This vortex sucked all the traitor marines—now known as the Fallen—took half of Caliban with it, and shattered the rest.

Reeling, the Dark Angels captured Luther and imprisoned him the Rock. In the aftermath of the battle the Dark Angels closed ranks even further. They vowed that no one would learn of the treachery of their brothers, lest the entire chapter be consigned to death. In the millenia afterward they have dedicated themselves to hunting the Fallen, believing that if they can hunt down every last Fallen they will finally atone for the sins of their geneseed.

The era immediately following the Battle for Caliban is the only era in Dark Angels history in which any one brother knew the full extent of what occurred. Those surviving Angels were sworn to hide the truth even from new Dark Angels raised via recruiting. Over time the number of Dark Angels who knew the full story dwindled until eventually there were none left. Now the truth is locked away in the annals of Caliban. The full truth is not known to any single marine, with some secrets locked away from the highest ranking members of the Chapter.

Your average battle brother is ignorant of the truth. The truth of the past is restricted to an organization known as the Inner Circle: the Death Wing, a few Masters, and some of the Chaplain and Librarian forces. The rest are insulated from this knowledge through ritual and rank. Rising to a position where they might learn even a scrap of information requires decades of dedicated service, exemplary performance in battle, and tests of loyalty.

One of the tests to join the Inner Circle involves a psychic interrogation by the Grand Master of the Librarius, Ezekiel. This test is so intense that 1 in 3 Brothers straight up decline promotion to avoid it. In addition to this psychic loyalty test, Ezekiel is responsible for keeping the Book of Salvation; a listing of every Fallen marine left uncaptured.

The Hunt for the Fallen

While decades may go by without a sign of the Fallen, there is nothing that the Dark Angels obsess over more than this grudge-fueled game of intergalactic hide and seek. Cast through space and time, the Fallen are not a cohesive force. Some fight as renegades and mercenaries. Others have learned how to create new marines and bolster their forces. Some even ingratiate themselves to the Imperium and seek their own salvation. Regardless, all are hunted by the Dark Angels.

While not a true leader, the most important Fallen is Cypher. He is as powerful as he is enigmatic and so far has proven impossible to capture; after the fall of Cadia he even attempted to gain access to the Throne Room of the Emperor, but managed to disappear from the most secure jail on Terra after being captured. No one knows precisely who he is, though Fallen rally to his banner and so he is sought above all others by the Inner Circle.

In the Codex Supplement’s section on Vigilus, we’re reminded of how the Dark Angel’s pursuit of the Fallen led them to abandon the White Scars in their assault on an Ork fortress. This is not a unique occurrence; there is no length to which the 1st Legion will not go in order to pursue the Fallen and keep their secret hidden.

One of the many things that make the Dark Angels unique is the organization of the 1st and 2nd companies. Normally the pages given over to Chapter Organization are a little too dry for a lore review, but in this case they’re worth highlighting.

Clad in black and riding all manner of high-speed vehicles, the Ravenwing are a highly coordinated assault force. They often ride ahead of the main force on recon missions, or as fluid coordinated strikes. While none of the rank and file are aware of their secondary mission, any time the Ravenwing deploy they are also looking for information on the Fallen. Trained to recognize the signs even if they don’t recognize the purpose, they will radio information back to their command. If Fallen are identified, the Ravenwing deploy teleporter beacons to call in the Deathwing.

Wearing bone colored army, the Deathwing are the Chapter’s 1st Company and the only company who can say that every single member is in the Inner Circle. They are all made aware of the basics of the Dark Angels’ past; enough to know of the Fallen and to dedicate themselves to atonement. Thanks to the deep stores of arms on the Rock every member of the Deathwing is clad in ancient Terminator plate. Because of the need for secrecy, members of the 1st Company also act as the jailers on the Rock. After all, any Fallen who is imprisoned is still dangerous and their “care” can not be trusted to normal Battle Brothers.

Do you like secrets? Get ready to hear about secrets! This supplement is full of secrets, allusions to secrets, descriptions of secrets, and even sometimes reveals some secrets. Luther is gone, either escaped or rescued by a Demon Prince during an assault on the Rock. The Lion lives as well! He has recovered from his wounds and lays in stasis, awaiting the day that he will wake and rejoin the fight.

Overall, the lore in this book is fun. I’m partial to the Dark Angels and am not just saying that under a condition of membership on the Goonhammer writing team. In fact, until I decided to create my own chapter I had originally planned to build my Marines as a Dark Angels successor. Speaking of successors, the book also includes a number of successor chapters and art schemes for those who want to paint a color that is not green. Though it is at odds with the secretive nature of the Dark Angels, leaders in many of their successor chapters are included in the Inner Circle in order for their chapters to join the hunt.