Previously we looked at the new Maggotkin of Nurgle Battletome from a more competitive or matched play perspective. Today we look at the Path to Glory rules and how they work in your narrative campaigns.

Path to Glory is all about setting up your own army’s narrative in a larger campaign with your friends and local group of players. The rules for the Maggotkin book open up new options for your army, the territories you can control and even the role you play in some of the narrative missions with unique Quests and Veteran Abilities as well.

There’s also a name generator if you’re as bad as I am when it comes to thinking of names for your models with some rather hilarious combinations possible (thanks Papa Nurgle) like Liverlash the Lord of Entrails. Not just a name generator for your heroes though there’s also a table of names for mutations and diseases for your army to spread! These don’t offer any further rules, it’s all just to help you set up a more in depth backstory for your force.

An interesting twist is that Daemon units that are not Heroes are not recorded on your roster at all. A concept first introduced with the Seraphon Tome Celestial, when setting up your army for battle you instead can choose 3 daemon units per Great Unclean One or the Glottkin and 1 per Nurgle Daemon Hero. So if you have 1 Great Unclean One, a Sloppity Bilepiper and a Poxbringer you can choose up to 5 Daemon units for your army for that battle. This represents that most lesser daemons are amorphous and tend to fade back into the Realm of Chaos once their short-lived existence has ended.

As is very fitting for Nurgle you get 3 unique quests to try and achieve for your force in games. Each are fairly simple to achieve but completing them gives you different bonuses.

The Garden of Nurgle

Like other new tomes, you have a few new territories to play around with. If you roll a 61-66 on an exploration roll then you get access to unique Nurgle territory, which corresponds to one of the stock options but has more powerful effects. If you don’t care what you get, you can choose a base option, choosing a roll of 21-42 instead. The unique ones are:

In addition to discovering new territories as normal you can also seed your territories by completing the Gardener of Nurgle or Spread Contagion quest. If you play the Encroaching Corruption battleplan then you may be able to seed a territory as well!

Seeding a territory is easy, if you are given the opportunity to then at the end of step 6 of aftermath then choose a territory you control and replace it with the Nurgle version (listed above).

On the opposite end of that if your opponent is given the opportunity to revert a territory after it’s been corrupted then instead of you making an exploration roll in step 6 your opponent picks one  of your territories and reverts it to its original form. You still keep the territory but it’s no longer all slimy and gross.

If you’re using the Path to Glory battleplans from the core book and you are designated the role of Defender then you must use the Blighted Landscape rules. You’re the defender if the battleplan lists you as ambusher, custodian, guarding, or ritualist. Playing on a Blighted Landscape adds additional rules to the game as follows:

Hidden Corruption – In your own hero phase choose D3 different units within 3” of any terrain features and on a 4+ that unit is given 1 Disease Point if it’s an enemy unit, or if it’s friendly then you receive 1 Contagion Point instead. Being able to punish enemy units that are hiding in terrain or being able to bring more daemons to the table a little quicker is a pretty big boon either way, since it’s for free.

Aid Me, Grandfather! – Once per battle when a Nurgle Hero is slain (mortal or daemon) before removing it from the table you beseech Nurgle for help by rolling 1 dice. On a 6 the hero is not slain and instead all of its wounds are healed and any other further wounds yet to be allocated from the same attack are negated. On a 3-5 the hero is slain as normal. On a 1 or a 2 though the hero is still slain but before you remove it you add 1 Beast of Nurlge unit to the field.

Tearing Down the Garden – If your opponent wins the battle then they roll a dice and add 2 to the roll if they won a Major Victory. On a 6+ they can revert one of your corrupted territories.

Whenever one of your units gains access to a Veteran Ability then instead of choosing one of the ones from the Core book you can use one of the following instead. These are still limited to being used once per game by that unit and only one Veteran Ability can be used each turn as well across your army as per usual.

The book gives us 2 new Path to Glory Battleplans to play in place of the Core Book ones.

If you have completed the Gardeners of Nurgle Quest then you can choose to use this Battleplan instead of one from the Core Rules.

Deployment is set up lengthwise with the opposing player having ¾ of the board as their territory and the Nurgle army set up along a short edge in the last ¼ section. The nurgle player is the Gardener and the opposing player is the Defender. The Defender can set up 1 faction terrain piece as normal but the gardener cannot set up any before the game starts. The armies start potentially close too with the Defender set up 9” away from enemy territory and the Nurgle player able to deploy anywhere in their own. One objective (cessnode) is placed dead centre of the table with 2 more cessnodes further back into Defender’s territory. The Gardener can change a cessnode into a rotnode by setting up a Feculent Gnarlmaw within 1” of the centre of it. The best way to do this will be with Horticulous Sliux or simply by summoning them in. 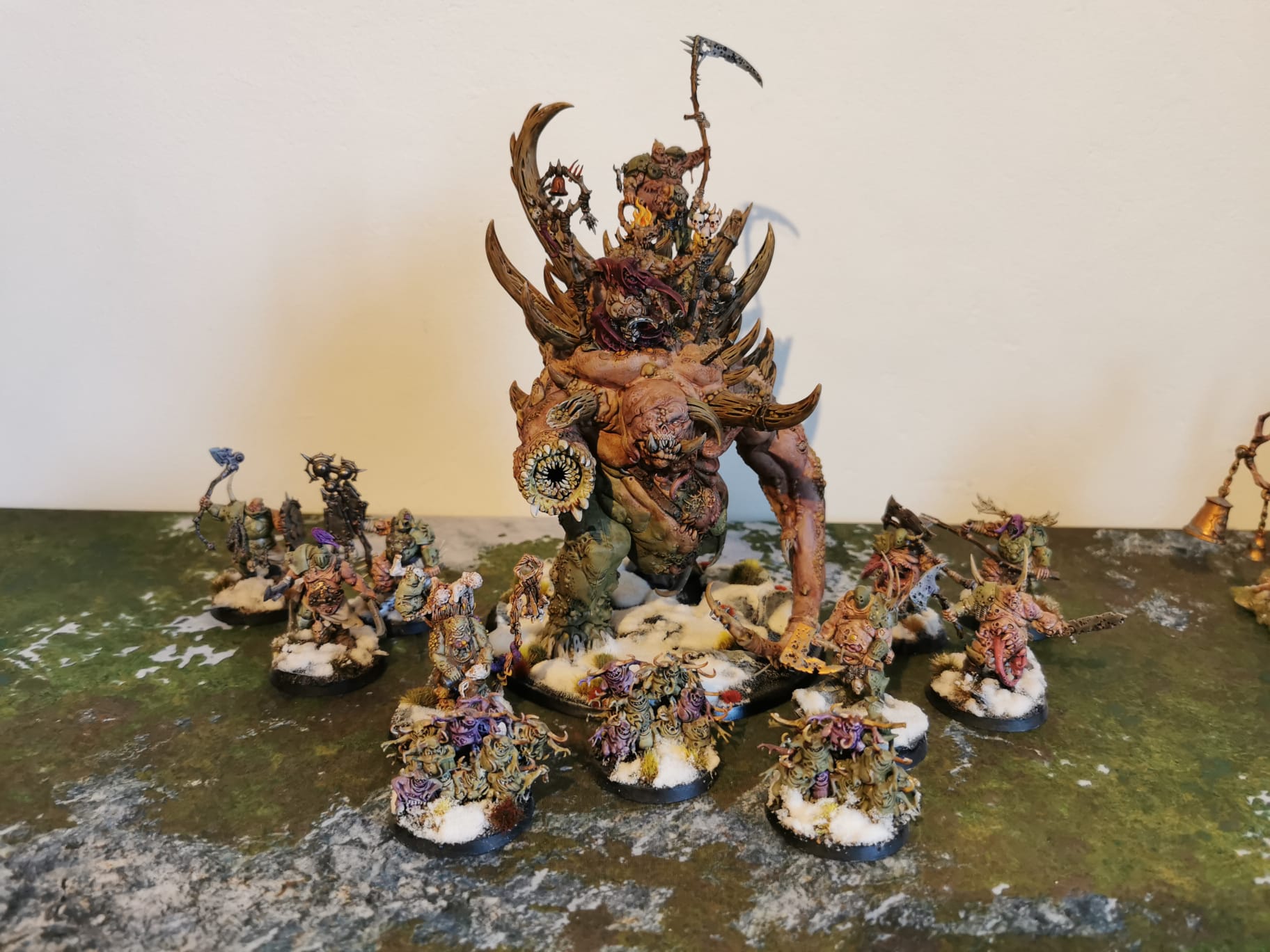 This battleplan doesn’t require a quest to be played and can simply be chosen if one player is using a Maggotkin of Nurgle army instead of one from the Core Book.

One player is the Corruptor and the other is the Defender. The Maggotkin player is always the Corrupter always and their list must include a Great Unclean One, Horticulous Slimux, The Glottkin, Festus the Leechlord or a Feculent Gnarlmaw.

The board is split into two equal halves with units being deployed more than 9” from the opposing territory and each player allowed up to 1 faction terrain piece.

The defender has access to a command ability for the duration of the battle called Burn Out the Rot! which is ordered to a unit within 3” of a Feculent Gnarlmaw and more than 3” from all enemy units. The ordered unit rolls a dice and on a 2+ the gnarlmaw is removed and the unit that removed it suffers D3 mortal wounds. This is important though as these plague trees can win the corruptor the game.

The corruptor has to have at least one Great Unclean One, Horticulous Slimux, The Glottkin, Festus the Leechlord or a Feculent Gnarlmaw within both their own and their opponents territories to claim a major victory. If any of these are only present in enemy territory then it’s a minor victory instead. The defender instead wins a minor victory if there are none of the listed units in their own territory and a major victory if there are none on the table at all.

Also, any unit in enemy territory at the end of the game gains 1 extra renown point.

This seems like a fun mission to play but if the corruptor brings multiple of the units listed to gain victory can be a really tough fight for the defender, especially as the battle goes on and Gnarlmaws can be summoned to the table to add more issue but at least they can be removed easily through the command and through monstrous rampages.

Putting the Play in Plague

Path to Glory is a very different way to how a lot of people look at Age of Sigmar, which is usually through the Matched Play rules. It’s great to see that each battletome is getting its own set of unique and very fitting rules to incorporate and change how campaigns are played. The Maggotkin book definitely doesn’t disappoint when it comes to it’s unique rules and I’m looking forwards to starting a campaign next month with it!