G’day all. Today we want to bring you the news about the new edition of the sci-fi skirmish game Deadzone. In their latest livestream, Mantic announced not only the 3rd edition of the Deadzone rules, but also new terrain, models, mats and more! All of this will be available on the 25th of October, with pre-orders opening up next week.

Watch the recording of the livestream here, but read on for all the info and our thoughts.

Before we get into all the releases, we thought it would be good to introduce the premise of the game Deadzone. Set in a cyberpunk future, on a world under quarantine (the titular Deadzone), the players control bands of elite soldiers as they fight for survival and control of the Deadzone.

Similar to the old iteration of Games Workshop’s Necromunda, the game focuses heavily on three-dimensional movement around city-scape terrain. The terrain itself plays a major role in the game, and Mantic has a range of affordable terrain sets that completely fill up your battlefield in styles from derelict ruins to military installations.

Currently there are 10 factions to choose from including the venerable space dwarfs known as Forge Fathers and the terrifying disease-enhanced mutants referred to as the Plague. Some harken to popular sci-fi tropes, but others, like the Asterians, are completely unique.

The rules of the upcoming 3rd edition of Deadzone are no major departure from the beloved rules of 2nd edition. However, with all the FAQs, erratas and supplements (both Outbreak and Escalation) that have come out, this new rulebook brings them all together. This will make navigating the rules as a new player to Deadzone much easier, and veterans of the game will now have everything in the one place.

The primary focus of this new edition is to streamline the game rules of Deadzone with a few key changes:

All-in-all, nothing here that’s too different from what we see in other games. Just some good quality of life changes that make it easier for new players to get into the game, and keep veterans happy, and Mantic are definitely trying to build their player base, so good work there.

A Tale of Two Books

The rules of the upcoming 3rd edition of Deadzone will be contained within two books; the Core Rule book and the Force Lists book. This separation of the core rules and the faction rules means that if new factions need to be added, this does not invalidate the core rule book, and vice versa. The price for both the books together is £30.

The Core Rule book will be 88 pages of background, main rules, campaign rules and 16 different scenarios. The book boasts a sleek design full of new artwork and helpful gameplay diagrams.

Mantic is particularly proud of the background section, going into the lore of the Deadzone universe; what is a deadzone and why fight over it? They also expect that upcoming global campaigns (like the recent Fight for the Rift campaign) will move the lore forward in a way that the community can influence.

The Force Lists book will be 127 pages long and will contain all the stats for every unit in the 10 different factions of Deadzone. This will not only update all the current models to the new rules, but add in some new entries as well. There will also be an extensive showcase of all the miniatures, including the identification of all the different weapons and equipment (there’s a lot!).

Glad to see Mantic is sticking with the “few books” format. Makes it easier to understand your rules and travel to games when you don’t have to lug around 6 books. Easier to play when you know what book to look in as well. Updating and expanding the lore is excellent, too. Mantic hasn’t had 40 years of existence to develop their worlds, yet seeing the background grow, and being able to help shape the direction it develops in through their global campaigns; this can give a lot of investment for the players.

Coming with the new edition of Deadzone is a two-player starter set featuring the over-sized rodents that are the Veer-myn facing off against the brave troops of the GCPS (Galactic Co-Prosperity Sphere). Part of the starter forces in this box are two new models in the form of faction leaders. The GCPS get a Ranger Lieutenant which can also be the unique character Therese Washington. The Veer-myn bring a hulking Pack Leader; good luck bringing that beast down easily.

The starter set also contains hard-plastic city-scape terrain and a new gaming mat all in the style of cyberpunk. There’s neon signs, a sushi bar, advertisement billboards and lots more that really bring this city to life. This terrain is designed to work with all previous terrain sets, so maps can be a mix of terrain types to make truly unique battlescapes. 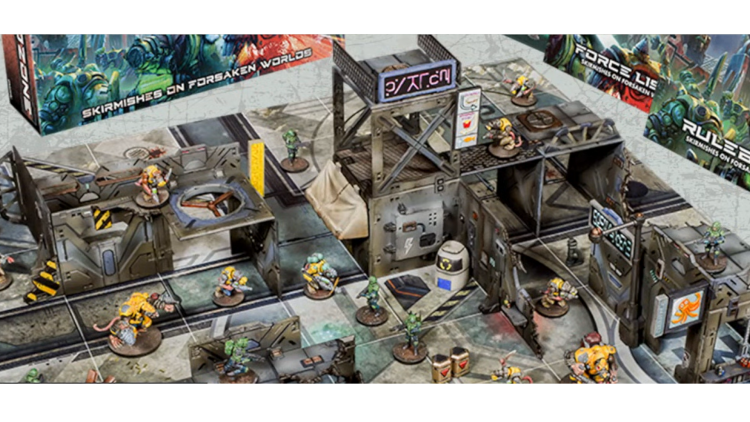 If that wasn’t enough, the set also comes with both the new books as well as a range of tokens and unique Deadzone dice.

New plastic terrain sets are interesting. The one shown in this preview looks great, and has been designed to be closer to the initial shutdown of a city, so there’s much less of the usual “destroyed sci-fi buildings” you see from most terrain makers. The new models look great, especially the Pack Leader. This starter set is definitely a great starting point for new players.

Anyone familiar with Kings of War and Armada will know just how fantastic Mantic’s EasyArmy is for army list construction. This official tool of Mantic ensures that every list you build in your games is up-to-date and tournament compatible. As we have mentioned in our Kings of War articles, this army construction tool is free to use, but a small subscription unlocks the ability for special rules to be printed along with the army list, as well as the ability to save multiple lists (up to 100).

Up until now, Deadzone army construction has been a fan-supported endeavour primarily via apps such as Battlescribe. As Warhammer 40K players know, this app is only as good as the fans that work tirelessly to update it. With Mantic EasyArmy, updates will always come with each rules update, which will support Deadzone tournaments to come immeasurably.

The redesign of the unit profiles combined with Mantic EasyArmy will make army construction the easiest it has ever been for Deadzone. Expect a lot of new players coming in now that the whole process has been streamlined.

EasyArmy is probably the best list building tool out there. While it only supports Mantic’s games, being an officially supported tool makes it always up to date. For Kings of War, it even had the Halfling Beta list up for subscribers. We never make lists by hand anymore, so this will be great for everyone.

What would a new edition be without some new models? In addition to the new leaders in the Starter Set mentioned above, a few other models will be coming to the Deadzone battlefields on the 25th of October:

To accompany this new edition, the various starter and booster boxes for each of the factions have been repackaged to make it even easier for new players. The previous faction starter sets contained many miniatures, to the point that new players felt a bit overwhelmed with choice. Now, these boxes have been condensed into an easy to manage army right out of the box. Furthermore, this helps bring down the starter box prices so that the cost of entry for new players is even lower.

Not sure about the change in faction starter sets, but with a drop in price it probably is going to be good for newcomers. The new models do look good though, and updating the materials older ranges will bring them some new life. It’s a nice bonus to see the new Overdrive minis make their way into Deadzone, too. We’re hopeful there will be some more crossovers in the future!

October will be an exciting month for Deadzone. The 3rd edition books, starter set and new models will all be coming out, as well as the terrain, tokens and dice being sold separately.  In addition we will see the repackaging of multiple factions as described above including the Veer-myn, the GCPS, the Enforcers, the Forge Fathers and the Asterians.

In November, the long awaited Artificer models for the Forge Fathers will be released, bringing support to all the mechanized weapons of war the ancient dwarfs can muster.

In 2022 (which isn’t that far away anymore, what happened to the year!?) the Plague will have all the PVC models updated to resin, bringing the Mantic resin crispness to the awesome range of Plague miniatures. After that, the long awaited update to the Marauders (space orcs) will come, introducing hard plastic miniatures to the range, as well as new models with all sorts of new weapon options.

Just good news here. Lots of stuff coming and coming fast by the looks of it!

It certainly looks like October 2021 is the time to get into Deadzone if you haven’t. With the Starter Set containing literally all you need to have dynamic games, why wouldn’t you? For those with other sci-fi miniatures, this new ruleset makes it even easier to integrate your other minis into this fantastic game. Buying the starter set even just for the books and terrain will be worth it (and who doesn’t like some space rats?). We will certainly be getting into this new edition of Deadzone!