Alright everyone! My name is Craig Sniffen/MasterSlowPoke and over the last two years my primary army has been the Rainbow Warriors. I’ve always been partial to the more fun/jokey armies – previously I’ve played Catachans (before they were good!), 2nd Edition Necrons, and the canonically Bad Army: The Lamenters! Rainbow Warriors is a faction I’ve always wanted to play, and the release of 8th edition was the perfect impetus to get started.

I’m currently prepping for the Nova Open 2019 Narrative. My original idea was to try and get a new army ready in time, but there’s only less than 6 months in between Adepticon and Nova. I didn’t really want that much stress in my life. It is early May and I’ve got 15 weeks to whip my army up into shape. Plenty of time! In fact, I’m getting a tired, I might go to bed a little early today.

Oh shit, it’s the end of June?! There’s only 9 weeks until the first day of Nova?!

Luckily, I don’t think I have an overwhelming amount of stuff do to before Labor Day weekend rolls around. One thing that I’d like to do is update my army. I started painting them in February 2018, and in a little more than a year my painting skill has evolved.

There’s about a year of difference between the models in the center of that image and their squadmates to the side. It’s not a crazy difference, but it’s definitely noticeable. That’s something I’d like to fix with my Rainbow Warriors. I also have to complete the box set from Shadowspear. Speaking of which… 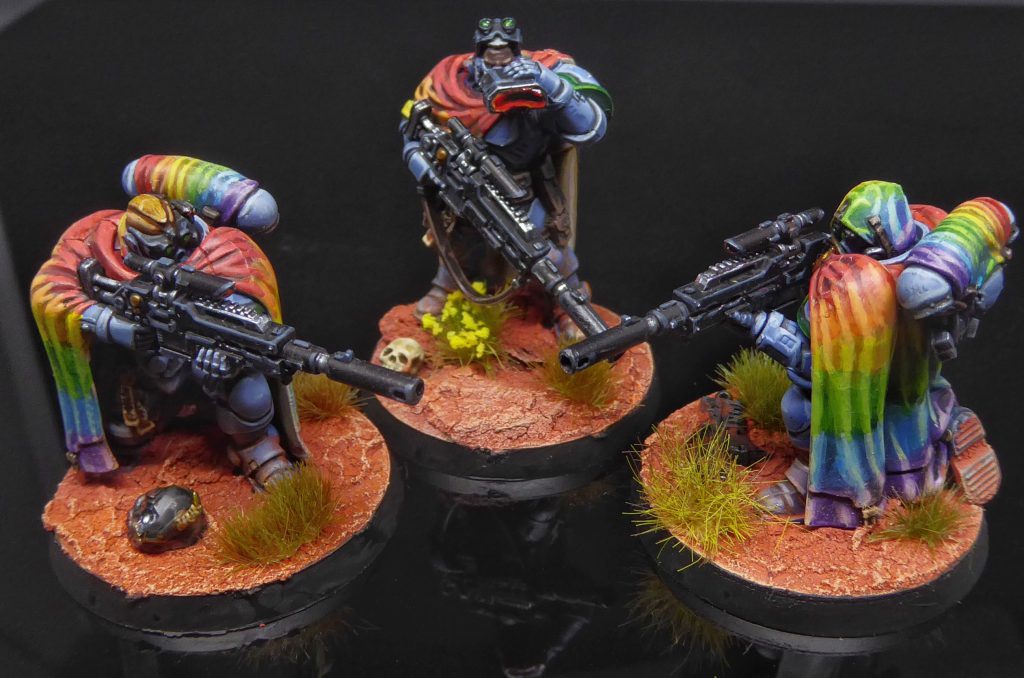 I’ve been wanting to revisit my actual rainbows for a while now. Before, I largely just did an airbrush gradient and called it a day. However, they were never really as bright as I was hoping, and my army was constantly being mistaken for Ultramarines. That simply cannot stand. This is after trying to teach myself wet blending and thin layering. It definitely looks better, and I now have ideas on how to do it without so many harsh lines. Once I figure it out I’m going to revisit all of the rainbows in my army.

Going forward, beyond Shadowspear, I don’t have a whole lot to add to the army. I’m getting a Repulsor Exterminator day one for sure. The hint about Las Fusils for Eliminators makes me excited to paint even more rainbow cloaks, should they show themselves before Nova. One thing I’ve been lacking is small marines in my army, and after reading NovemberMike’s excellent article on Space Marine Kill Teams, I’ve dug into my closet and built out some tiny, well armed dudes to add to my Command Roster.