Hello everyone, MasterSlowPoke here, and I’m starting to get nervous! We’re at one month until I fly out to Nova!

Over the past few weeks I’ve been able to get some pretty decent time into painting. I’ve finished up the 5 Primaris Infiltrators: 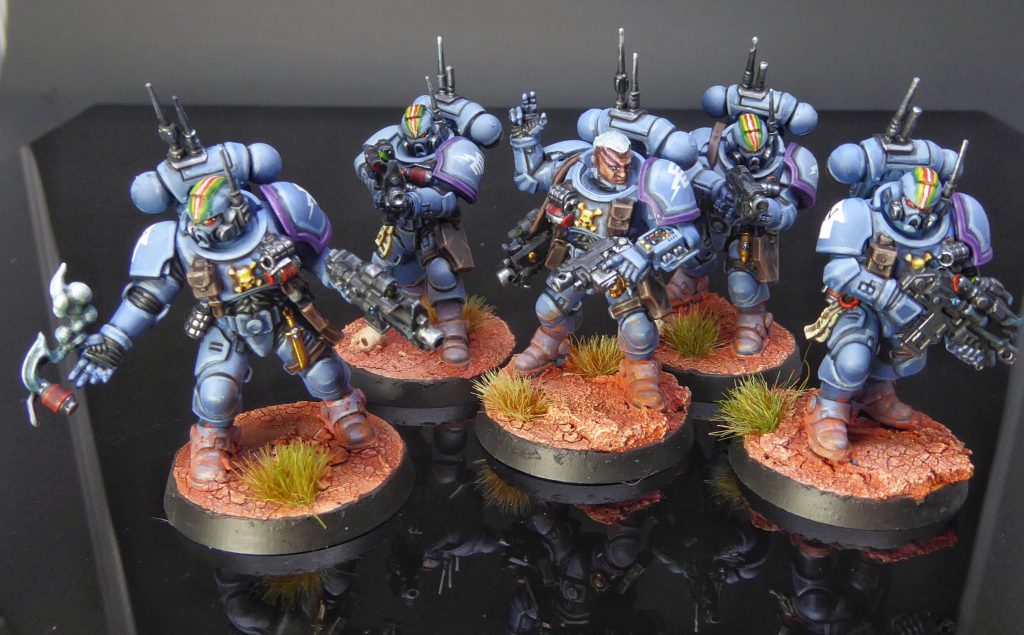 The Infiltrators are definitely my favorite of the Primaris infantry models. The monopose sculpts are way better than the Intercessors found in Dark Imperium, and the cut back armor is just really appealing to me. Sergeant Scratchface there might have my best face painting that I’ve done.

In addition to these Phobos-armored marines, I’ve painted their boss, Lieutenant Stab: 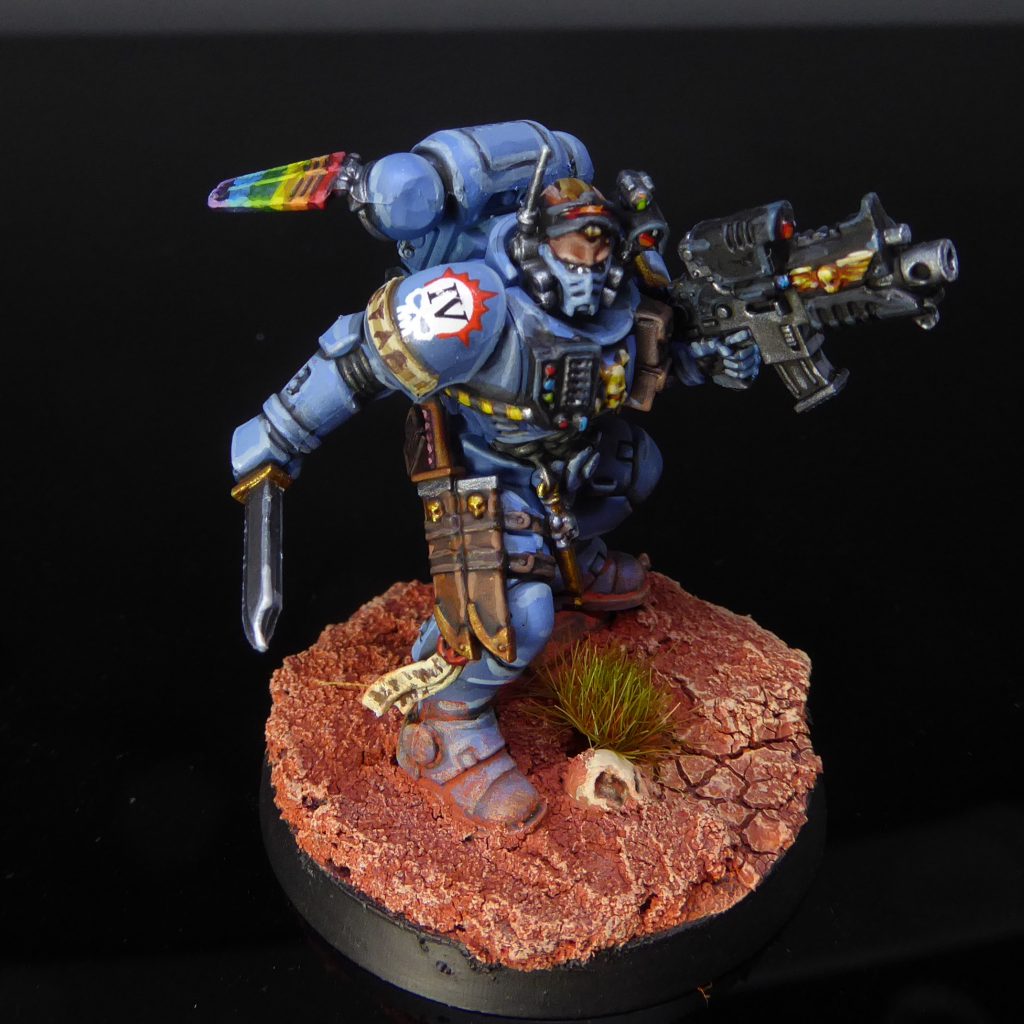 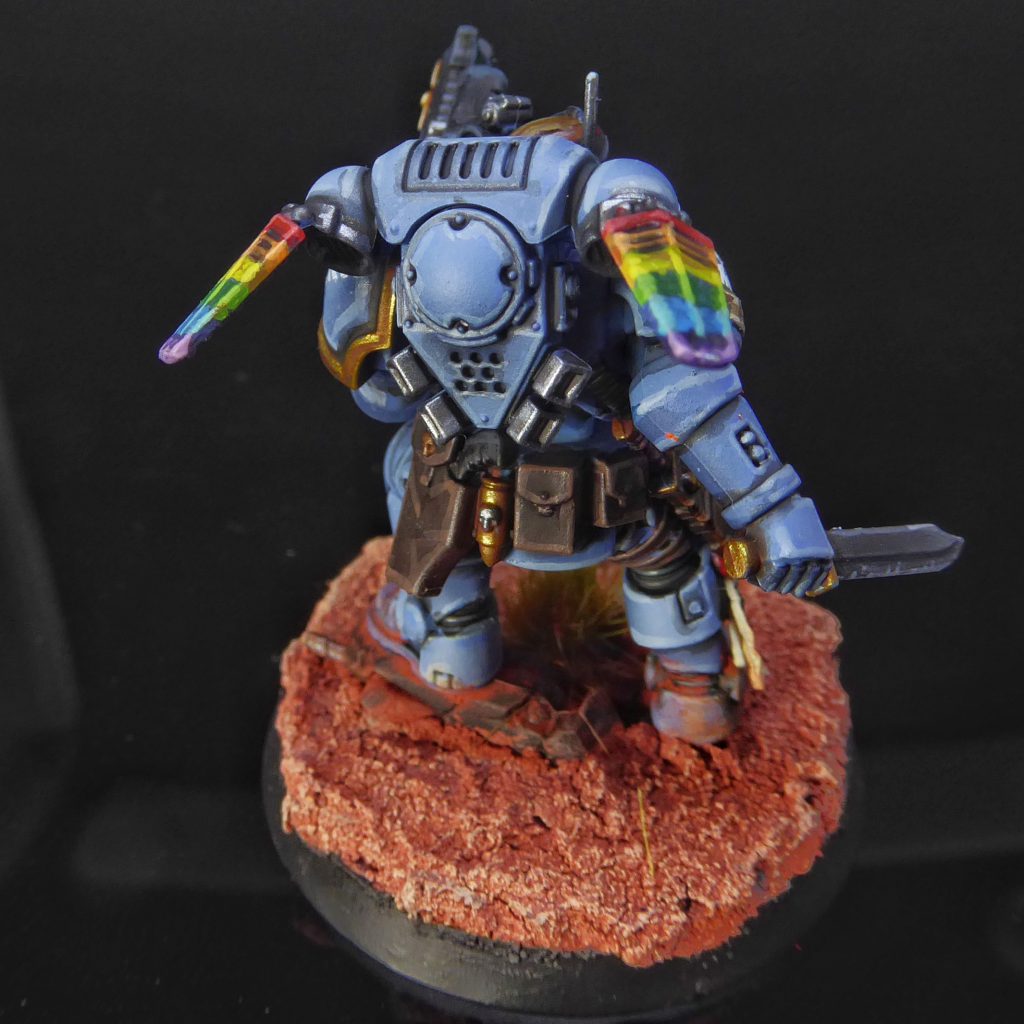 Shadowspear is a box with incredible models, and chief among them is the Phobos Lieutenant. His pose exudes so much character, and personally I think he’s way more intimidating than the overly dynamic new one that GW has been teasing. This model was also one of my first forays into using Contrast paints – what little skin he has is basecoated Gulliman Flesh, and his hair is Snakebite Leather. The black casing on the gun is Black Templar. I was happy with it with the skin and hair, but having to re-undercoat the gun with white paint really made the gun not worth Contrasting in my opinion.

On Wednesday of last week I realized that I was out of Kantor Blue and would have to drive down to the GW to pick up some more. I figured that if I was making the long drive, I might as well enter the Everchosen contest. I didn’t think that any of the other models I’ve painted recently have enough pizzaz to wow a crowd, so I quickly painted up another Shadowspear model, the Phobos Librarian:

This model is kind of the end game of doing my new rainbow scheme, and I think I pulled it off pretty well! Compared to my Eliminators and my Phobos Captain, it is much less ‘scratchy’ looking.

I did drop this model off at my local store for Everchosen but didn’t place, but that’s probably because I had to get there late and got there 4 hours after it started.

Now that Nova is only a handful of weekends away, I really need to start working on a list! On Monday night I finally decided that I felt the new Space Marine book was going to be post-Nova and that it was safe enough to write a list. I spent a couple hours trying to write a double Repulsor Executioner list, and went to bed happy with it. When I woke up I was 62 points over! The overnight points change was pretty distressing and, in my opinion, uncalled for, but I must move on. We here at Goonhammer have already done a great overview of the impact of the points increase, and I think I have a basic double Battalion double Executioner list I’ll be happy with:

I might swap out the 7 man Vet Intercessor squad for an Infiltrator squad for the better painted models and deep strike protection, I’m not yet sure.

On the painting side that leaves me with the Relic Contemptor and two Repulsors Exterminator to finish. The one bad thing about painting Repulsors is how many pieces you really want to paint it in, as Dan from the 40k Badcast can attest to:

With a month to go I’m confident that I’ll be able to get everything I want finished well before Nova, as long as I don’t go crazy and want to add something time consuming!