It’s a complex world out there of animal products, and Goonhammer is here to help. Whether it’s ranking the staple animal-based proteins on the market, or when a new type of meat drops and shakes up the game, we’re here for you, our loyal readers.

Look, we know what you’re thinking: This is by far one of our worst pun-based ideas. But Greg gets real pissy if we don’t let him just go to town roasting something, both literally and figuratively, every thirty days or so. And so we present: CRAB.

It was inevitable that we’d cover this one. A force no less powerful than evolution itself can’t seem to stop creating new crabs, and who are we to argue with that? The internet’s newest word of the day – carcinization – describes the process by which the moral arc of the universe is long, and bends toward crabification. It’s absolutely wild that you and everyone you love will one day sprout claws and return to the sea from whence we came, but it’s true.

But also, I live in Baltimore. It’s crabtown, baby (no one calls it this). Perhaps best known for having more murders than New York City despite being 12 times smaller (note: I did not say more murders adjusted for population, I mean in absolute terms), our local food scene is on a constant boom-bust cycle. That’s broadly true everywhere, but the seas here seem overly high, their peaks and troughs washing through the streets and sweeping them clean, like so many unmarked sewage pipes letting out into the harbor, which is a very normal thing that happens here. I can’t seem to get through one of these without being a downer for at least part of it, so at a certain point you have to wonder whether the tide is coming in or out – are the good times the fits and starts of a rust-belt city tipping into a renaissance, or its last ragged gasps for air before sinking beneath the waves permanently.

In any given year we either have access to a glut of fine artisanal charcuterie spots, or a choice of shuttered storefronts to crash dirtbikes into. To give you an idea of where the curve is now, we just got a new ramen store, owned by a man from Osaka who showed up in town and was so shaken by the state of things that he immediately flew home, became an expert in the craft, came back, and comprehensively dumpstered the two other places in town. Good times, but two years from now I expect to be eating one of our enormous rats from under a truck. The one constant presence, dumped out of a bucket onto folding tables wrapped in rolls of crisp brown paper, is succulent Chesapeake Blue Crabs. I’m not from here originally, and I will readily admit that Baltimore objectively sucks, but once you start busting up small crustaceans to feast on their innards, the place does tend to grow on you.

Steamed, with a heavy-handed dump of Old Bay, Chesapeake Blues are the only crabs you need and, in fact, the only ones you should accept. However, in passing, we’ll address the other crab types, because Meatwatch stands for thorough reportage. I don’t want the King crab due to my views on the monarchy (although boiling and devouring them is technically praxis). I will never respect that trash of the Pacific, the Dungeness. I firmly believe that no one living has ever eaten the Coconut Crab, because it is too huge and too scary to defeat. All other types of crab are beneath mention, or I forgot about them in my lust for Chesapeake Blues.

It’s not even really about the crabs. It’s about the shared experience of whacking the stuffing out of something. The search for tiny flecks of delicious meat comes secondary to the Crab Feast itself, a platonic ideal of goofing around with family and friends on the patio or rooftop deck on a hot afternoon – why not have some cheap beer, if you’re into it? Yeah it takes all day and you barely get any food for your work, but who cares. Have some claw meat, then a little bit of body meat, maybe try and suck meat out of the legs like a hideous goddamn freak, it’s all good. And it’s about the spices, that find their way inside all the cuts and scrapes your hands will inevitably pick up while bashing open shells, and burn like hell. The main idea of Maryland is that if we can eat it, it gets covered in Old Bay, and if we can’t eat it, we screen-print our lovably garish state flag on it. Learn these two simple rules, and you too can pass for a native.

I don’t have a larger point to make here this time, I just really like crabs. They are good to eat, and you should do so when they’re in season again. Crab dip is fine too.

Here I’m going to introduce Goonhammer supporter Rocco Gest, or WinstonWolfey on social media, who is building his very own crab-themed chapter of Space Marines, The Emperor’s Carapace. I hit him up recently to ask some questions about this, and about crabification in general: 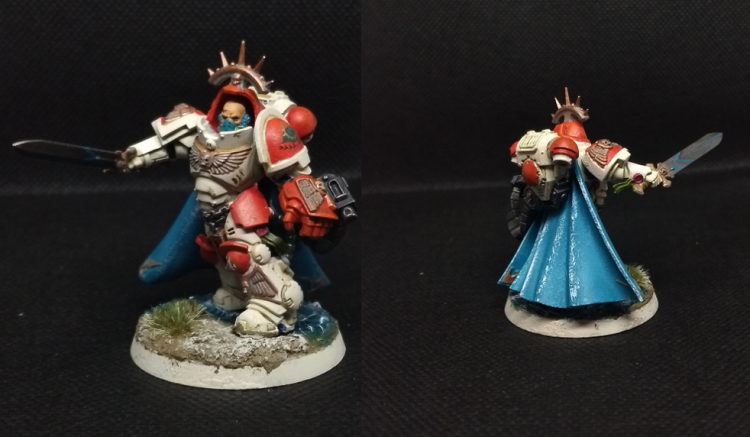 Goonhammer: So what inspired this? Other than the obvious.

Rocco Gest: Well for starters, that gif of the crab with a knife made a huge impact on me. It imprinted its energy onto my soul. I should also cite the Baltimore Crabs, a team participating in the cultural event known as Blaseball, as a source of inspiration for my crustaceous ravings. So, one night I was trying to decide what Space Marine successor I should use for gameplay. I was mostly looking for canon chapters and came across a lot of bad ass looking heraldry and thought “Are there any crustacean-based chapters?” I scoured the wikis and any documentation I could find, and discovered that there was in fact not a crab-based successor chapter. I decided to, as Big Weld (played by Mel Brooks in Robots) always says, “See a need, fill a need.”

GH: Can you talk about the specific ways you chose to include the noble and delicious crab in your army’s rules, models, and fluff?

RG: The first and most obvious way that I included the most regal of bottom feeders in my models is to use Gravis and Dreadnoughts out the wazoo. The reveal of Heavy Intercessors felt like GW was looking over my shoulder. I’ve since conceded that crabs can be nimble and slightly less armoured, and have been using Incursors to great effect.

As for rules, I decided to use the Stalwart chapter trait, not being able to wound these crabby bois on anything less than a 3 felt very fluffy.

As for the fluff, the chapter is a Raven Guard successor (simply my favorite founding chapter – Corax kicks ass) founded as part of the 26th founding, just before Primaris were introduced. As soon as Cawl revealed the Primaris, the chapter flocked to cross the rubicon because they saw it as their chance to molt into bigger and more durable shells. The only members of the chapter who refrained were veterans specializing in the use of Terminator armor. Since then, they changed the chapter structure to keep marines in the 10th company even after a neophyte has their final implant, only moving to more specialized companies when they cross the Rubicon Primaris as a rite of passage. I also gave them a gene-seed flaw loosely based on the Sable Brand that the Raven guard suffer from. I call it The Drowning, and it’s triggered whenever a marine sees a battle brother fall in battle. Latent psychic power causes the dead marine to force his brothers head-first into battle with no regard for their own safety. This is meant to symbolize the idea of crabs in a bucket stopping their shelled brothers from climbing out.

GH: How do you feel about crabs, as a friend animal?

RG: As stated above, crabs can wield knives. This is pretty kick ass. Any animal that can stab me is pretty cool in my book. Also they move all sideways and shit. I like that. They are cool little exoskeletal fuckers.

GH: Same question, but as a food animal.

RG: As a non-resident of Maryland most of my crab consumption is done through imitation crab in store-bought sushi, and sometimes real crab from good sushi. Crab cakes kick ass. Crab dip also kicks ass. Breaking open crab shells is a hassle but always worth it when I get my hands on some snow crab. Soft shell crab gets around this, but then you are forced to consume all the removable bits of the crab like the poop sack. I don’t wanna eat no poop sack.

GH: It’s pretty fucked up how everything eventually evolves into a crab, right?

RG: I beg your pardon? If by fucked up you mean “Why have humans not yet reached this pinnacle of evolution?”, then yeah it’s pretty fucked up. Where is my carapace, God, you sky bastard?

GH: This being Meatwatch, do you have any tangentially-related Hot Takes that we can torment our readers with? It doesn’t have to be about crabs at all.

RG: The Black Album is overrated and St. Anger is underrated.

GH: Now that is how you do a Hot Take.

Thank you, Rocco, for whatever it is you’ve done here. And thank you, dear reader, for enjoying Meatwatch, which I assume you do, but you probably don’t.