Mentor’s Road Past NoVA: Y’all were just dying to know.

Long time no see right? After dropping a paragraph in the initial Road to NoVA I kinda dropped off the face of the world. I’m sure you’re all dying to know if I managed to grind through the massive swarm of half-painted ‘stealers right?

Well short answer, I didn’t. Not by a long shot.

More than anything else, NoVA has been a learning experience. I had a ton of fun of course, hung around with cool Hams and got absolutely shitfaced, but most of all I learned one very important lesson:

Advice we could all live by.

Like seriously, after all that worry and all-nighters, after lumping a case full of paints over to try and get some frantic hotel-room painting done, after fretting about my list a million times over the months leading up to NoVA, I get there and it’s the chillest place on earth. Nerds playing games with nary a care. We got absolutely sloshed and threw dice around, it owned so hard.

Let’s break the con down:

After a pretty gruelling 10 hour flight sat next to a pair of Eastern European gentlemen who would just not stop bellowing at each other every hour on the hour, I slammed my bags in my room, grabbed a much needed shower and went out to meet some goons. Many drinks were had, many names were struggled to be put to faces and I had a quick look around the convention hall. With its multi-level set up, the whole place resembled a bustling hive of nerds. I’ve been to the occasional anime con back home, but nothing compared to the sheer scale of this. It’s overwhelming at first, but then you realise you’re surrounded by every sort of wargame possible and it becomes all sorts of comfy.

Woke up bright and early, then promptly got hit with a dose of jetlag and was forced back into bed. Managed to eventually heave my carcass up to have another browse of the place before the BADCAST BEATDOWN started. Went nuts buying a bunch of Turbo Dork metallics/colourshifts after hitting a brick wall of tax charges trying to order some earlier in the year. No regrets, they’re awesome paints.

2pm strikes and the BADCAST BEATDOWN begins. Got matched up against Scott Horus Heresy and the terrible majesty of his tacticool kimono. His Imperial Guard stomped all over my poor Genestealers, the Shadowsword did me proud by murdering the shit out of Commander Pask before crumpling under the weight of artillery fire, and the Kellermorph whiffed salvaging the game with his VIP clinging onto a single wound. Good game though, and Scott’s a cool dude.

After chilling in the aftermath and grabbing some dinner, I toddled along to the Community Seminar only to be stuck waiting 20 mins or so outside an empty lecture hall. After one more enterprising nerd did some digging, we found out that the Community gang in charge of holding it had forgotten about the whole thing and had gotten themselves tied up with other obligations. Whoops.

Luckily it wasn’t a total wash, as the NoVA staff managed to grab one Pete Foley and Robin Cruddace to hold an impromptu Q&A (who incidentally, did a little interview with Goonhammer here). Not exactly what I paid for, but still worth it. ` 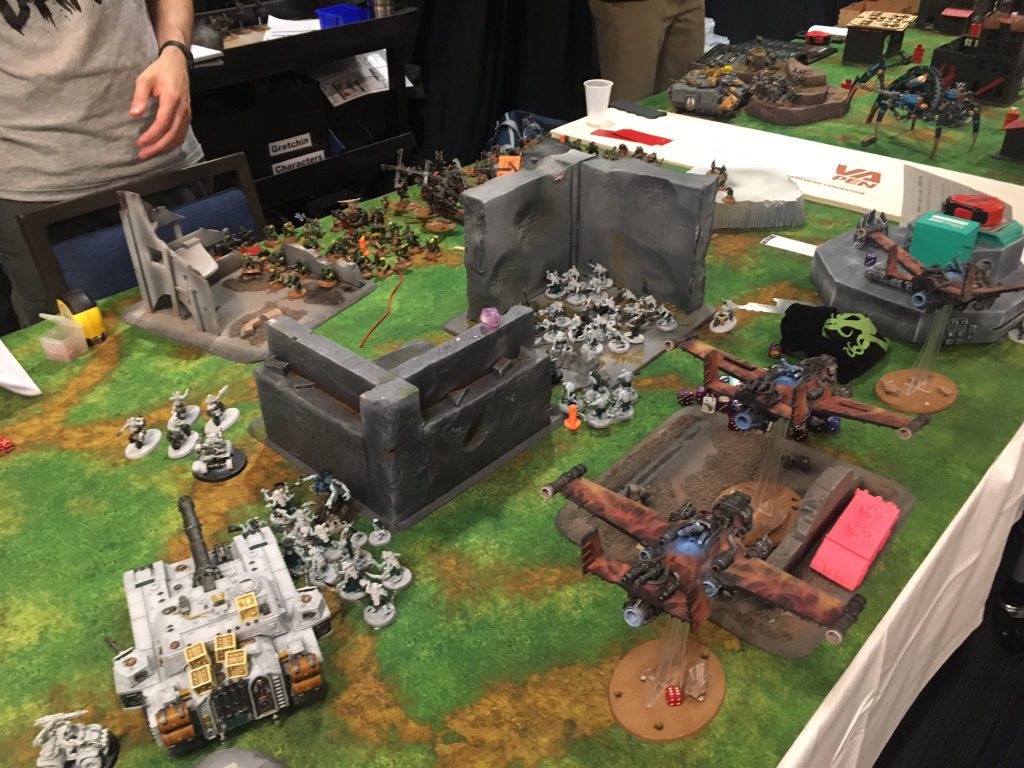 Nightfight 1: Those jets did more damage to each other than anything actually worth shooting at. Datz proppa Orky.

9pm bears down and the first Nightfight of the 40k Narrative kicks off. I volunteer for team Humanity like all Cool and Datable individuals should and get squared off against Ames with their Ork mob, playing the convoy mission. He takes one look at my trio of flamerbombs and pulls his deployment far back, daring me to come to him while his squadron of Wazzbombs pour shot after shot into the Shadowsword and only manage to chip the paint.
This goes on for three turns until I decide to dice it and move in. We get a proper bloody brawl in the centre of the board with both our armies getting mangled and it’s neck and neck. At this point, both of us realise that we’ve completely forgotten about the objectives and the Shadowsword promptly blows his truck sky-high from across the board. We drag to about 1:30 in the morning with our last scraps of units slapfighting until we decide to call it, with the Cult managing to secure a win on objectives. Good stuff right there. 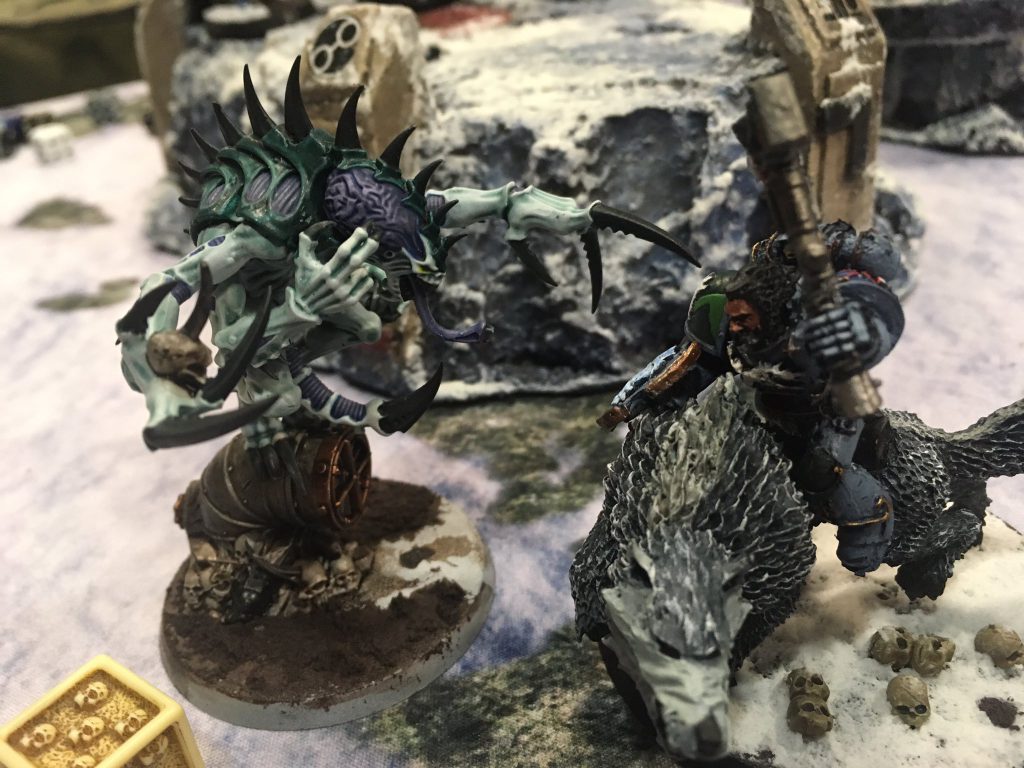 In a miracle, I actually manage to get a decent night’s sleep and wake up decently early to boot. Dayfight 1 is against Space Wolves in a 1000pts match. Unlike the previous game, he deploys aggressively and we’re in melee by turn 1. Every activation leads to something dying miserably. Intercessors get splattered by the Patriarch only for him in turn to get his head golf-clubbed off by the Wolf Lord. Wulfen and Aberrants manage to mutually slaughter each other and the Sanctus pops the Libarian in the head, leading to all sorts of Perils-based hilarity. By the bottom of the game we’ve only got the Sanctus and a completely mauled Acolyte squad desperately weathering Long Fang fire to secure just enough points via Interrogation. Another win and another good game to boot, feeling good going into the next.

Even before the second Dayfight starts shit goes wrong. We run out of tables in the tiny corner the Narrative is crammed into so we have to go scavenging around the GT hall for a spare table, getting guff from the judges who think we’re playing a pickup. Then my opponent shows me his list.
It’s a rancid T’au castle list, painfully similar to the one that would eventually go on to win the GT. On top of that, the mission we’re playing demands we deploy short table ends. Even with the ubiquitous NoVA lineblockers in the centre of the board, that gives him essentially two free turns of adjustment and shooting while my poor cultists slog up the board to meet him. I can’t even Kellermorph the VIP for a sneaky win because he’s got them surrounded by a sheer tide of carefully spaced Fire Warriors and Pathfinders.
Needless to say this all goes very one sidedly. I think in the end my final kill count was a handful of Drones and like four Fire Warriors. Grim. At least we got a good view of Rob’s Kytan blowing up his own dudes. 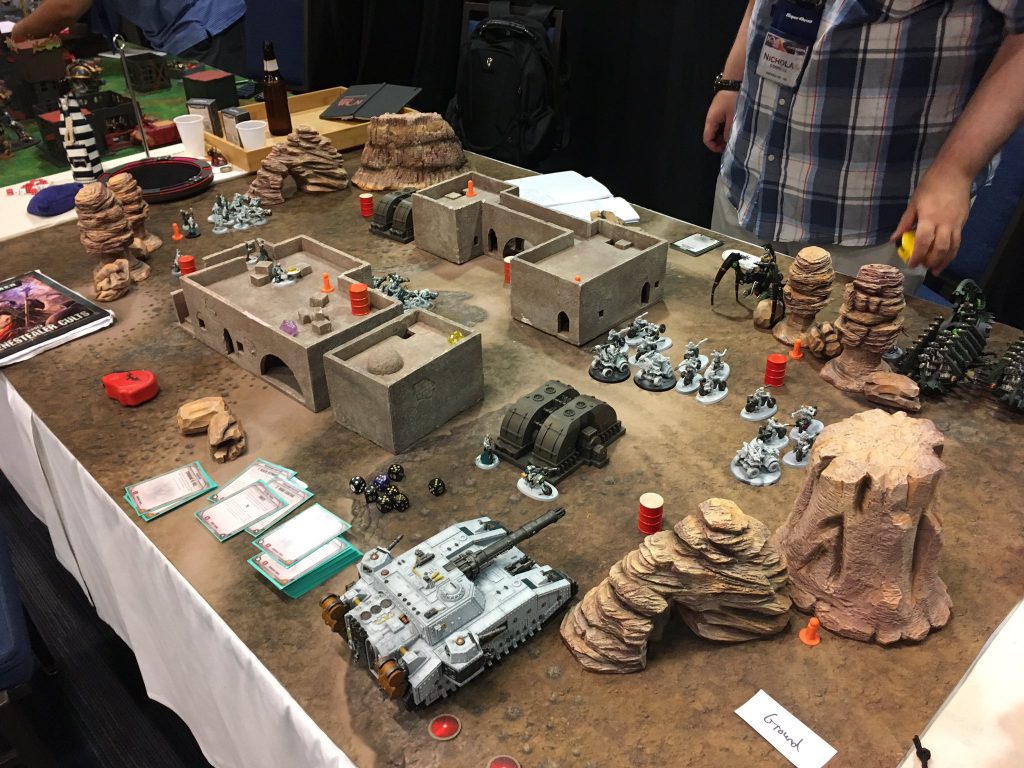 After a pretty damn good kebab lunch with Goons and some retail therapy picking up a new airbrush, I’m ready to go again. Heading into Nightfight 2 with a better mindset squaring off against Nicholas’s Necrons, squabbling over some delicious, delicious oil. Things kick off well, with blip shenanigans pulling off a successful refused flank and forcing his Overlord and his Lychguard nurses to emergency Nightmare Shroud into a bad position at the risk of hobbling across the board all game. The Lychguard pile into the Shadowsword leaving the OL on his lonesome. The Kellermorph drops in to draw out his Deathmarks and bravely eats sniper fire so the Patriarch can drop in unmolested, the Maguses take turns tag-team Smiting the Overlord, who’s finished off when the Patriarch Mind Controls a Deathmark into turning around and shooting Space Grandpa in the back. With near total board control and his Monolith only able to drop in at the opposite end of anywhere to be of any use, it’s a quick win and an early night spent watching the new Dark Crystal show to recover from the previous three days. It owns btw.

I didn’t originally have anything planned for Saturday, figuring that I’d use it as a rest day. By midday I’m so restless I jump at the chance to snag a spare Doubles spot, getting paired up with gunline Ad Mech against a deeply unholy T’au/Nurgle alliance. 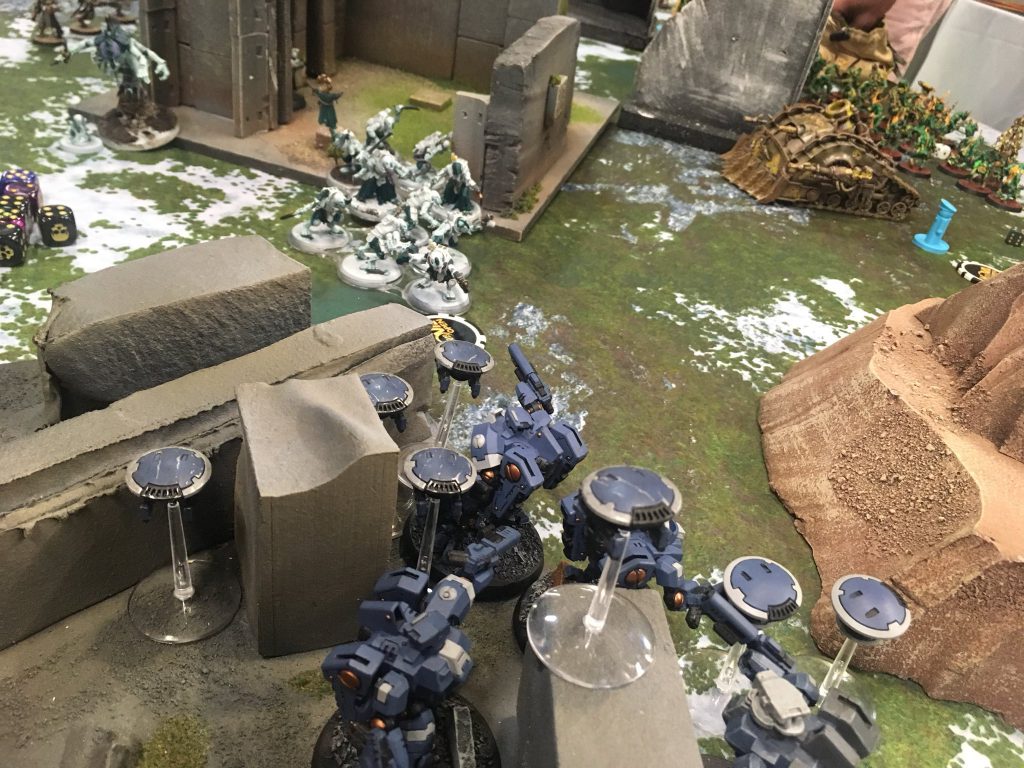 This game is a textbook case in tunnel-visioning in on a single, but admittedly dangerous threat at the cost of ignoring everything else on both sides. In our case, a massive Plaguebearer bomb that in the end did nothing but shuffle back and forth, and in theirs, hyperfocusing my force down while ignoring the massive firing line of Ad Mech advancing up the board. My poor bugbois got slaughtered by the combined fire of both the T’au and the Plagueburst Crawlers, leaving me with only my reserves left to play with, with the AdMech returning the favour in slagging both the slug tanks and blenderizing the bulk of the T’au. Our reserves squabble over the now empty right flank, with only my Patriarch left standing as the T’au commander flees from the objective and the AdMech securing everything but the central point, securing enough for a win. A tough game, but well fought.

Rest of the day was spent partying it up. Much drink was had, paella was devoured, horrible horrible names were given in Discord and I spent way too much on Malifaux minis that I’ll never play with. Admittedly, it was hard to justify buying much else while there. GW stuff is cheaper over at home, I don’t play in the house so MDF terrain is a heavy waste of money and the remaining Turbo Dork stuff was completely decimated by the second day.

BUT HEY I COULD HAVE MADE A WORSE PURCHASE 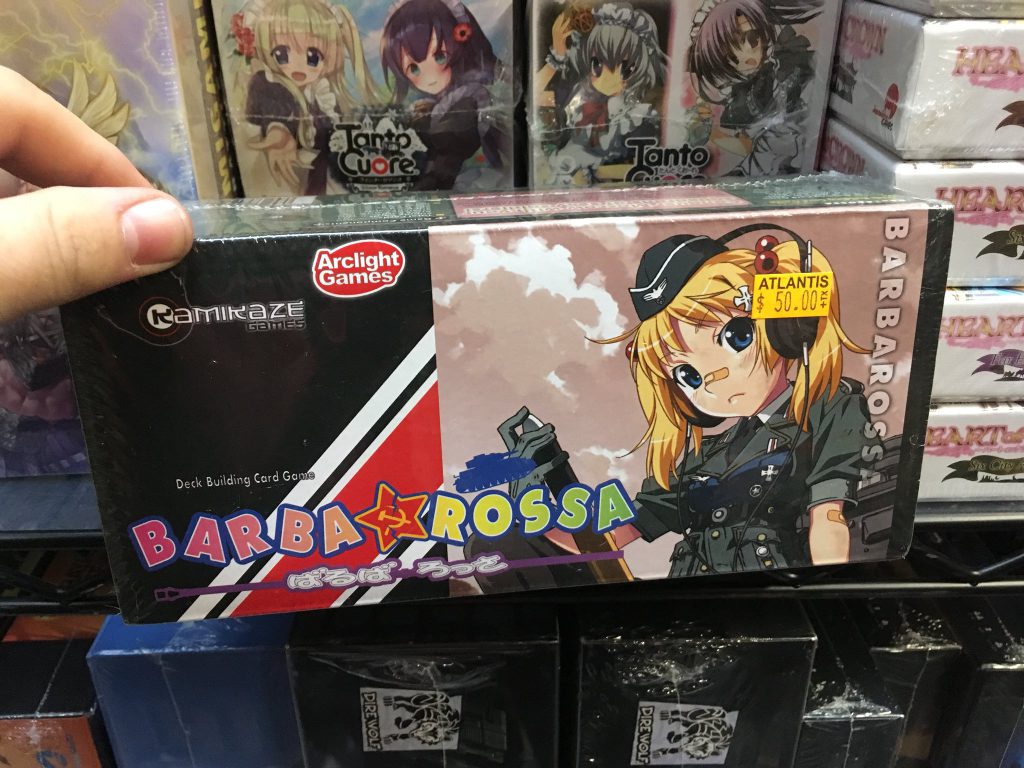 I still can’t believe this is real. What the hell. 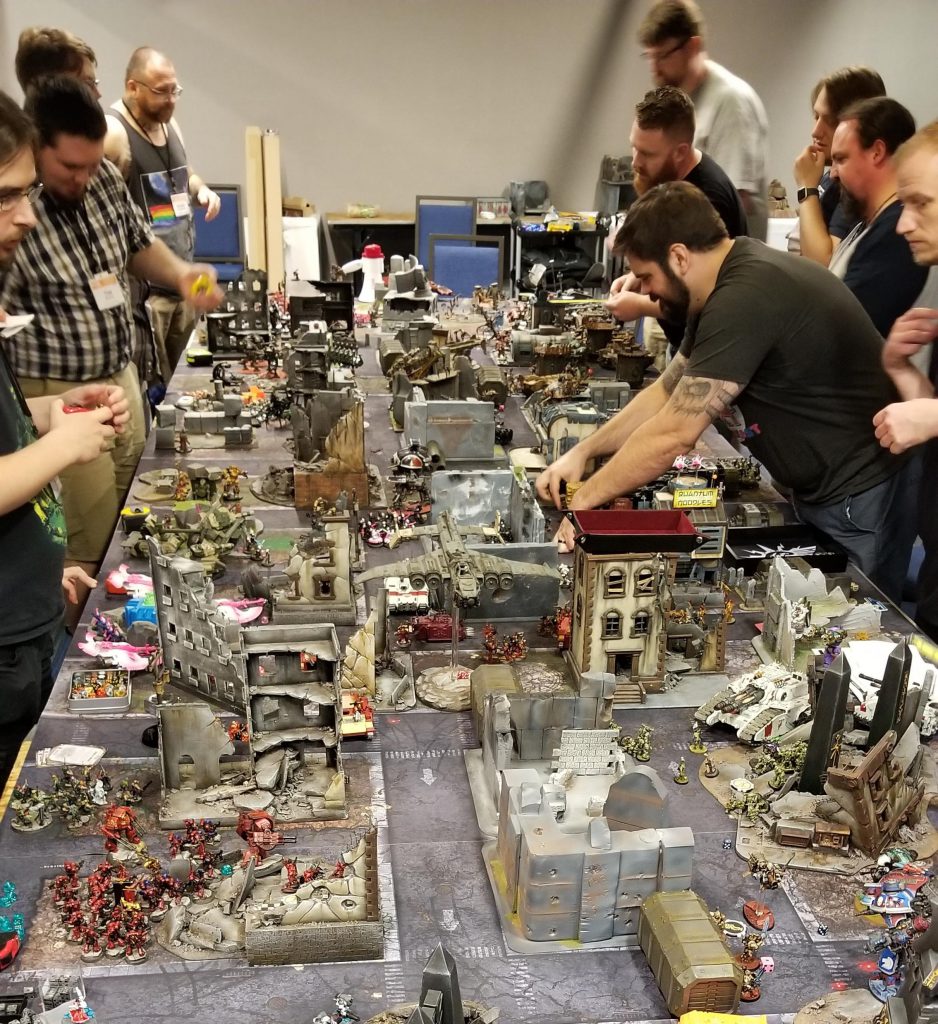 One final clash between Humanity and The Virtue. I wish I knew what the hell was going on. Credit: Fake James

Final day, an aura of exhaustion seems to linger across the entire hotel. All weekend I’ve been debating whether I’ll grit my teeth and power through the Narrative Apocalypse. Originally I bought a ticket for it in a fit of sleepless mania, then got a little more excited as new Apocalypse came out and turned out to be actively enjoyable, only for my enthusiasm to deflate when it was announced that Narrative would be using old Apoc rules for this year. Feeling jittery and irritable, I elect just to sit it out, poking my head in to watch occasionally long with a few other Goon games rolling on the barren sea of tables that hall has become. Admittedly, the Apoc did look superbly organised and ran smoother than I’ve ever seen old Apoc ran before, so there is a twinge of regret there. Ah well, at least got to see a Manta full of T’au detonate spectacularly, and the post Apoc sesh in the rooftop bar was the stuff of legends.

NoVA is unreal. Like, not only in that it owns bones and was a ton of fun, but also as in it half doesn’t feel real. I’ve never experienced a Hams event with this level of organisation and polish behind it and I’ve gotta applaud the NoVA staff and all their volunteers for what must be a monumental undertaking in making it such an awesome event. Big shout out to all the Goonhammer crew I met for being such cool and shockingly normal Hams as well as all the other chill attendees I met across the week. I’m seriously hoping to come back next year, perhaps with something a little bit… louder.