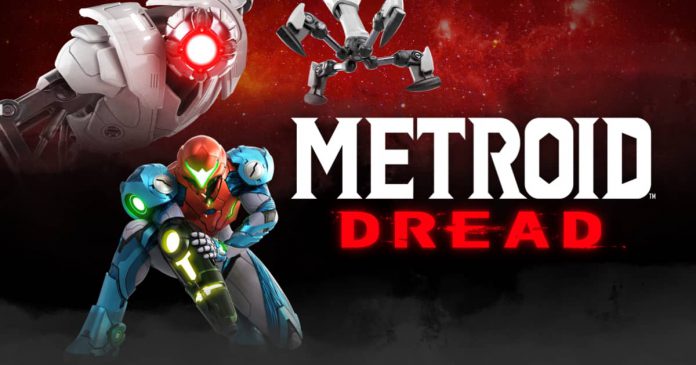 I’ve been a Metroid fan since the early days, having Justin Bailey’d my way through the NES adventure and spent time in the deserted labyrinths of SR-388 hunting metroids on a Gameboy long before the series’ most beloved instalment released. I enjoyed but never quite got into the Metroid Prime series; they just weren’t offering anything I felt was particularly compelling for the Metroid formula and so Fusion remains my favorite of the post-SNES adventures. So I was pretty excited when Metroid Dread was announced as a side-scrolling adventure on the Nintendo Switch. And it seemed like the right time for it – we’re well removed from those 6th generation console days when the industry demand for first-person shooters and 3D pushed everything in that direction. The success of indie games like Axiom Verge, Guacamelee, Shantae, and Hollow Knight has shown that there’s a clear thirst and path to success for a Metroid-style experience in 2D. The real question at this point is “what can Metroid still bring to the table that these late-stage innovators haven’t already covered?”

Enter the E.M.M.I. robots. Metroid Dread picks up after the events of Fusion – finally moving the series forward chronologically – and sees a Metroid DNA-enhanced Samus traveling to the planet ZDR on a tip that surviving X parasites have been found there. Once on the planet she’s promptly beaten and stripped of her powers by an unknown Chozo (birdman) assailant and then left to pick up and defend for herself. Oh, and there are six nigh-indestructible federation robots (called E.M.M.I.) that were sent there ahead of her and have been reprogrammed to kill her.

These robots are essentially where the “Dread” in the title comes from, and they’re thematically and mechanically the core of the gameplay experience here. Each of the major sections of the underground map you’ll visit has a large, connected zone that’s being patrolled and policed by one of these robots. You’ll travel through them multiple times as you wind your way through the map, evading the EMMI each time until you finally find the means to destroy them. The EMMI can “hear” you and once they lock on to your scent, you’ll need to either get out of the section quickly or find a way to hide long enough for them to give up the chase. Getting caught is typically instant death, though there is a way to avoid it – more on that in a bit. These sections of the game can be pretty tense, and early on they’ll definitely have you on the edge of your seat. After dying a few dozen times however, not so much. The good news is that the game is smart enough to end these right around the time they start to make the transition from “hair-raising” to “tiresome.” As such the EMMI end up being a cool mechanic that don’t overstay their welcome but they did leave me wishing for something a little more involved. There’s a definite tug of war here between giving you the freedom to explore and making you feel the pressure of being chased. In that sense the EMMI feel more like a more evolved version of the SA-X encounters from Fusion than something like say, the Mr. X mechanic in the Resident Evil 2 remake. The game probably could have used a Mr. X-like sequence at some point, since while the feeling of going through an EMMI-patrolled zone is intense, you’re also very much aware that you’re safe once you get outside that zone and that robs the game of a lot of the intended dread.

The core mechanic of Metroid is exploration and its core atmosphere one of isolation and mystery and on those fronts Metroid Dread mostly delivers. The planet ZDR feels appropriately large and varied, split into several large areas connected by various elevators, teleporters, and shuttlecraft and you’ll move back and forth between them as you traverse the maze and attempt to move upward. These areas are generally thematically connected – there’s an area with lots of lava and magma pipes, an underground forest, a water section, and so on – though here’s where the game’s current-gen graphics sell it short. Areas that should be visually distinct struggle to distinguish themselves. This is in part because most areas also include lava and cold rooms to prevent you from moving through them too early in the game, and because every section also devotes a large portion of its area to its EMMI-patrolled zone. These all share the same light gray aesthetic and basically rob half the game’s area of a distinct visual style. When you do get to see the unique parts of the map, the quality of the art direction shines through. Unfortunately, most of the time the sameness of the EMMI corridors and the zig-zagging elevator system meant I ended up losing track of which section I was in on more than one occasion, and needed to refer back to the map often. The music and sound also suffer in this regard – the majority of the game’s music has been backgrounded, kept muted with occasional hints of some of the series’ more memorable scores. It’s not a good effect. The muted sounds help some areas feel more isolated and desolate, but it’s overused and again, helps prevent areas from standing out from each other by taking away their ability to do so musically. The Metroid series has always had great music so this was one of the more disappointing aspects of the game.

The whole thing ends up making it inadvertently more difficult to develop a mental map of ZDR and navigate it, since you don’t quite have the auditory or visual landmarks you’ve been able to depend on in the past. This isn’t helped by the elevators, which can go to anywhere in a particular region rather than being forced to drop you off at the top/bottom of that region.

One reason I brought up being a Metroid veteran is that it’s important to understand where I’m coming from with regard to the game’s controls. I’ve replayed games in the series pretty often, including a stint earlier this year when I went back through Zero Mission and Super Metroid; the latter is a game I’ve beaten in under 3 hours with 100% items on more than one occasion, using some of the more basic speedrunning techniques like the mockball. So it’s worth noting here that I found the game’s controls to be frustratingly complex – even three hours in I found myself hitting the wrong button at times, and that’s likely a byproduct of a control scheme that requires the active use of all four face buttons and all four triggers. This is most egregious when it comes to the grapple beam. The process of grappling and swinging is needlessly complex controls-wise when it should have been fun, though thankfully the game seems to realize this and only has you swinging once or twice during the game. Outside of the grapple beam there were still some areas where I found myself hitting the wrong button and paying for it.

One area that was less welcome were the quick-time events. People who played the 3DS update of Metroid 2 will remember the melee counter mechanic. That returns here along with quick-time events in some boss battles. These are probably my least favorite mechanic in the game, and they will cost you a life or two as you miss them on a boss battle the first couple of times you play one. Otherwise the difficulty is… fine. The game feels a little hard in points, mostly on boss fights where it feels like you’re meant to die several times figuring out patterns rather than being given enough runway to make a few mistakes during the fight, even with a stockpile of energy tanks to buy you some breathing room. This mostly ends up annoying when you have to continually re-skip the same intro cinematic but on the whole I didn’t die enough to become frustrated and when you do beat a boss it looks great and is pretty satisfying.

I haven’t said much about the story; it’s alright, and just kind of there. It plays up some potential revelations about Samus’ past but none of that really matters. There’s an interesting but predictable twist mid-way through the game. The voice acting is fine. Really, these things are less important in a Metroid game than getting the atmosphere right.

If it feels like I didn’t like Metroid Dread, that’s not really accurate. I enjoyed my time with the game but a number of niggling issues kept this from being the world-class return to the series I was expecting. Metroid Dread is an enjoyable enough game and makes me glad they decided to revisit the Metroid franchise but doesn’t quite feel robust enough to justify a $60 price tag. It brings some interesting new ideas to the table and succeeds at making the EMMI a scary opponent to take on but undeniably loses something in the transition to modern graphics, sacrificing a lot of atmosphere in the process. As a Metroid game this is a solid entry, but unlikely to be anyone’s favorite. I’ll likely give it a second playthrough at some point and I’d generally recommend playing it, but I’d recommend waiting on a price drop if you aren’t hard up for games to play.