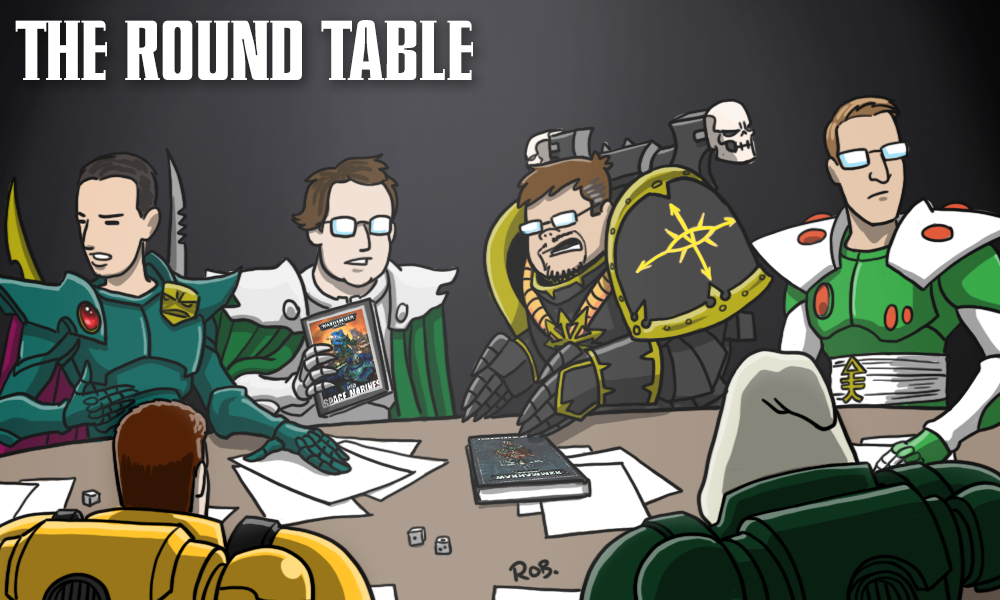 While Middle Earth Strategy Battle Game has had pretty consistent support, it’s generally been a named captain here or there. This past weekend GW previewed a wealth of releases for the game: a new starter, battleforce boxes, and a range of Elven heroes.

What are you excited about from this preview?

Lupe: Honestly I’m always surprised and delighted when MESBG gets some love. I think in Hobbiton all know that our beloved game isn’t the poster child it once was, so it’s heartening to have new investment made into it and attention paid to it.

Thundercloud: I’m happy that they’ve recognised that the rules are in an incredibly solid place at the moment, after (I think) 9 editions, and that no major changes need to be made that invalidate people’s piles of hardback books. A rulebook that includes the FAQ is nice, but it isn’t a compulsory purchase.

Fowler: While I have a few models purchased for a potential Angmar force, this is going to be my first actual dive into the game! It seems like a great time to get in, as the starter and army boxes have models I am very interested in.

RagnarokAngel: The new .5 edition is neat. I kind of wanted a new edition, because new editions tend to get people more excited which means more people might be willing to start playing. Still, a book that consolidates all the errata is still handy, and it does remove the necessity to buy a new book as I already have them.

GW has revealed that the new starter is Battle Of Osgiliath. Is this a good place for someone to start with the game?

Lupe: A much less intimidating block of stuff than the previous, plus some more coherent forces. It seems solid, especially with a rulebook refresh and some nice looking terrain. Plastic terrain in a starter is wonderful. Gothmog was so deeply badly in need of a refresh and it’s fantastic to get him, especially both mounted and unmounted. The Gondorian heroes also look fantastic, and it’s nice to see a modern Faramir.

Thundercloud: I’d agree with this. As a pile of stuff to get going it’s much more of a “here’s two 500 point forces” than Pelennor Fields, which had a coherent Mordor force but a mixed Good force. The Gothmog model is very nicely done, and a great Orc general. The trio of Minas Tirith heroes gives you a general in Faramir, but two named captains, and named captains are the staple of most armies (being better than generic captains and not much more expensive in points). Including terrain makes it a true starter set, where it gives you literally everything you need to start playing, and with just the contents of the box you can play reasonably sized games.

RagnarokAngel: It’s an iconic scene in the movies and as stated above the forces are a bit more coherent. Minas Tirith forces will probably sell better than a mixed bag of Good forces, though Gothmog feels less impressive than the god damned Witch King.

Fowler: This is precisely what I want out of my first inroad to MESBG – solid good and evil forces, an “updated” rulebook, and some neat terrain.

For the first time, MESBG is rolling out battleforce boxes. Does this make sense for the game?

Lupe: We’ve really been needing something like this for ages. Yes the troop kits are long in the tooth now but considering they stand up astonishingly well. The choice of pairing a modern hero kit with some of the older troops is great, and all of these boxes are actually a good starting place for the army. Overall, solid.

Thundercloud: Combat Patrols but for LotR were an idea that should have been done ages ago, especially with the need to provide a budget friendly point of entry. Centering the boxes around the new modern sculpting standards characters is a great idea, and everything being two sprues infantry/sprue of infantry & set of cavalry means you’re painting about 25 models tops. You’ve got a big exciting hero who can do lots of stuff, and some cavalry/fast troops, and some normal footsoldiers, so it’s a pretty balanced force and a taste of the different types of basic unit in the game.

RagnarokAngel: My immediate reaction was that the battleforces were exactly what the game needed. The game’s a bit intimidating to start – specifically because you probably will need to go online and order stuff. It’s hard to tell at a glance what you need. Handing you a grab bag of stuff from some of the most popular forces from the movies is perfect and may pull in some folks who were too intimidated to start.

Lupe: Elrond in plastic is extremely exciting but my true hype is reserved for the most noble and powerful of elf lords. Because he doesn’t make an appearance in the movies, Glorfindel has generally been lower on the priority list… so it’s wonderful to see him get a lush, modern sculpt.

Thundercloud: Elrond in plastic was a good move, as now it seems like every major faction has a plastic character set available to it. Rohan and Minas Tirith have the most, but there’s stuff for Mordor, Isengard, etc. More elf heroes give more depth in force selection, and Glorfindel is a great centrepiece model for a Rivendell force while Lothlorien has received more named captain level heroes. Replacing the finecast elite troops with Forgeworld resin is also welcome, even if the FW models will be more expensive.

RagnarokAngel: I play Rivendell so this is exactly what I wanted. Elrond being my favorite character in the setting means I’m especially happy about him having a beautiful plastic model. Glorfindel is also a fantastic get.

Thundercloud: Overall reasonably happy with this. LotR releases continue, and a new starter with only errata in the rulebook means no ‘new’ edition for the next few years. I hope that some of the tooling time showered on Specialist/Boxed games with the opening of the new tooling room makes it’s way to LotR and we get some new plastic basic troops, but I can also understand if new Orcs waited to see if GW got the licence for the Amazon series and did Orcs based on the look in that, along with 2nd Age models (where we might logically find Gil-Galad at the height of his power). But seriously GW, the Mordor Orcs aren’t great by modern standards and we need some new ones.

RagnarokAngel: I like the game a lot. I am baffled by its continued existence, but I want more people to play it. I’m not…sure it’ll get us there, as only a “half edition” isnt as exciting, but if it allows me to get a few more games in I’ll take it.

Fowler: Some combination of this stuff is likely to be my first inroad to MESBG. I’ve watched some games at my local club and it seems like it’s the right time to dive in!