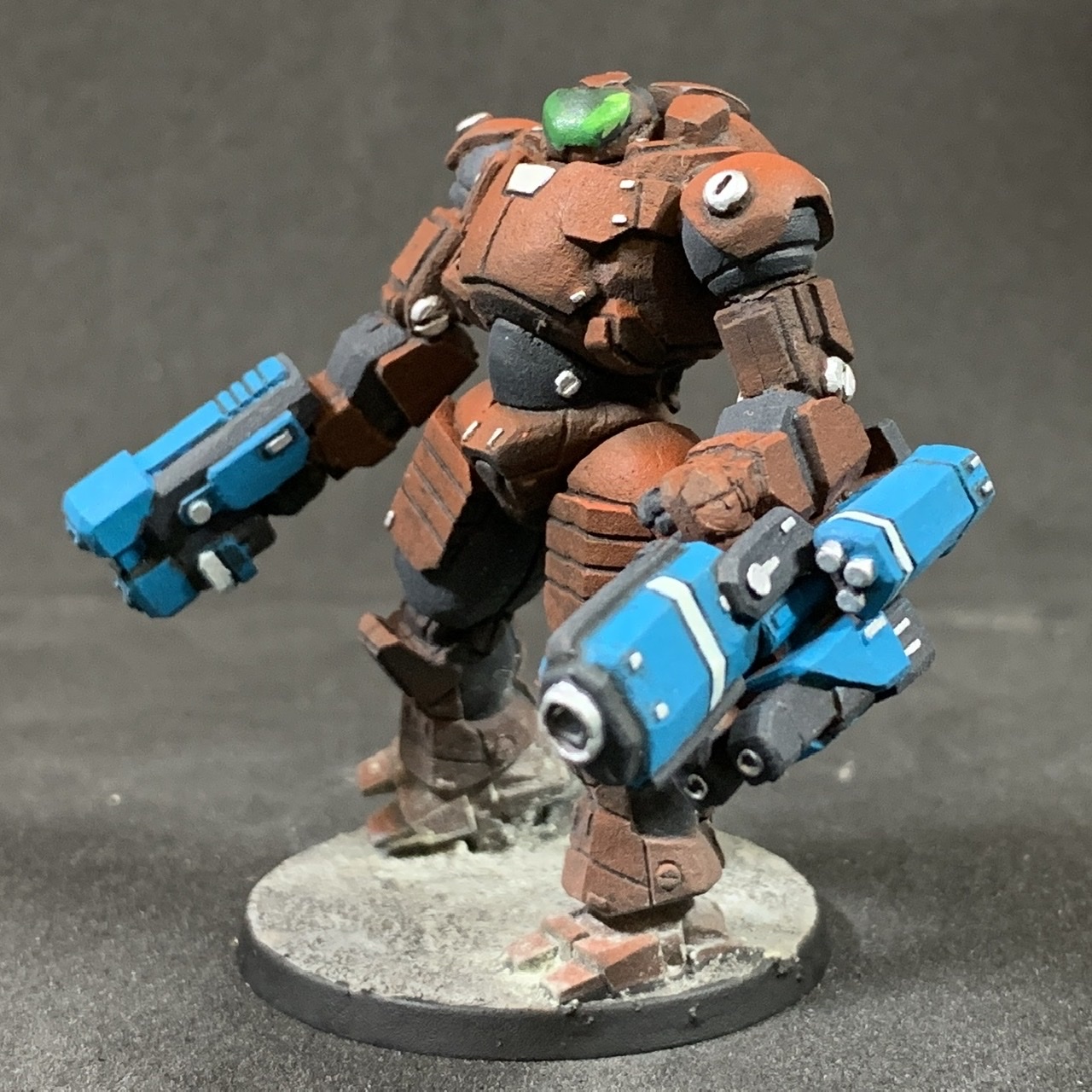 Welcome to Goonhammer’s new Miniature Review series, where we look at the wide world of tiny soldiers for cool stuff to share with all of you. This week, Mike is reviewing the Satria battlesuit from ZandrisIV.

Disclaimer: The miniatures in this review were provided to Goonhammer.com by ZandrisIV Miniatures.

ZandrisIV Miniatures produce a range for figures in both 28mm and 6mm scale. In 28mm, they provide traditional hand sculpted miniatures inspired by movies such as Appleseed and the work of Masamune Shirow. In this review, I’ll be taking a closer look at the Satria Battlesuit pictured above, which costs £14.

The model arrived in a small padded envelope, with the pieces contained inside a ziplock bag. Given the weight and sturdiness of this metal miniature, the packaging was appropriate.

The cast itself has very few mould lines and required very little clean up. Even the finish of the metal was relatively smooth after cleaning with a brass brush, and I likely could have gone further with fine grit sandpaper and steel wool. There are a number of options when posing the Satria Battlesuit, with limbs having ball and socket joints and a relatively fixed hip. There’s a variety of weapons to build out and it’s left to the modeller to decide how to go about this. I went for the biggest, most imposing main gun I could, mounting missile pods and the smaller blaster to the underslung arm cannon. Assembly instructions aren’t included with the kit, but given the relative simplicity of the build I don’t think that’s a bad thing.

Anyone familiar with metal miniatures knows they require some extra special care and attention, especially with a kit this substantial. All of the major joins on the kit have been drilled, pinned and secured with greenstuff. You should carefully dry fit and pose the model before pinning, the limb joints are relatively shallow so it’s worth taking the extra time. I didn’t quite get one of my pins in the correct place, which resulted in a slightly awkward pose on the left leg. All that being said, I still had this kit fully assembled in an evening and was ready to paint it the following day.

This is an imposing kit, fully assembled it has a real presence and with some careful positioning you can get some cool poses. The raised panels make for clean lines and the sci-fi rivets add some nice surface detail. Due to the way I’d positioned the right leg, I ended up bracing it with Blu-Tac until I was ready to base it properly. Thinking ahead to next time, I’d definitely want to pin both feet before painting.

This was a great mini to paint, with the wide and flat panels providing easy surfaces to lay down my layers. I used an airbrush for the majority of this, painting the undersuit with VMC German Grey and then using progressive zenithal shades of VMC Hull Red, VMA Air Red and finally Citadel Clear Angron Red to up the saturation.

Going back for the clean up pass was straight forward enough, retouching the undersuit. Taking the advice of one of my fellow writers, I wanted a weapon colour that would pop and VGC Turquoise was settled upon. With the base colours down, I gloss varnished and then panel lined the model to bring the details out. At this point I was feeling pretty good about the paint job, with sharp clean lines being brought forward by the high contrast recesses.

Speaking to ZandrisIV about the mini at this point, they encouraged me to add a little more detail to the kit and I’m glad I did. We figured out a spot colour, and I picked out the rivets.

Overall, this kit was a treat to paint but comes with the usual caveats metal minis have. They require a little extra care and effort when assembling, but nothing too onerous. It was easy to clean up, with minimal mould lines on the cast I received and the details were sharp and easy to pick out. The kit comes together pretty fast, and you’ll spend more time waiting for greenstuff to cure than anything else.  With a moderate sized hero rock, or some scenic basing, I could see this model being a cool alternate sculpt for a Tau Commander, standing around 70mm tall including the base.

Overall this was a fun kit to pull together and very satisfying to paint.You can pick up your own Satria Battlesuit at ZandrisIV Miniatures (http://z4miniatures.blogspot.com/2009/10/online-shop-main.html).