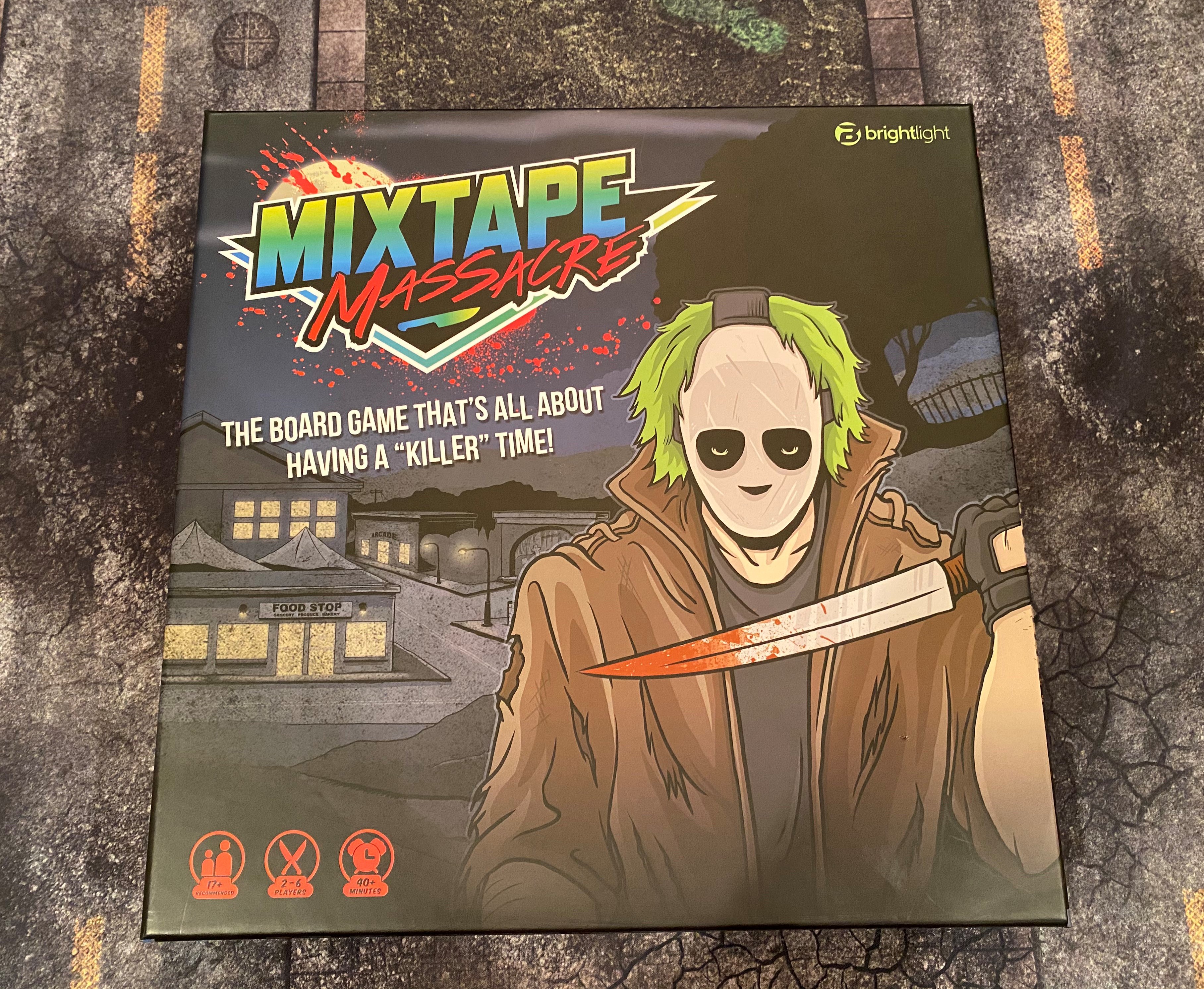 Greetings again readers! I hope everyone’s livers have properly recovered from all the Halloween and Election fun of the last two weeks, as I am here to drop a short review on you.

In the lead up to Halloween the Facebook algorithm saw fit to bombard me with a game that on first glance seemed right up my alley. Mixtape Massacre! This was advertised as a 2-6 player game where each player controls a classic 80s horror movie archetype in a race to either be the last monster standing or collect 10 victims as they rampage across the fictional town of Tall Oaks. After a quick glance at their web page I figured this game would be worth taking a chance on and made sure to have it in hand on Halloween night, so that I could play it with friends. Come that night we were not only able to get 4 solid games in, but with the maximum number of 6 players, which was more than enough to get a good feel for this game. So without further ado! 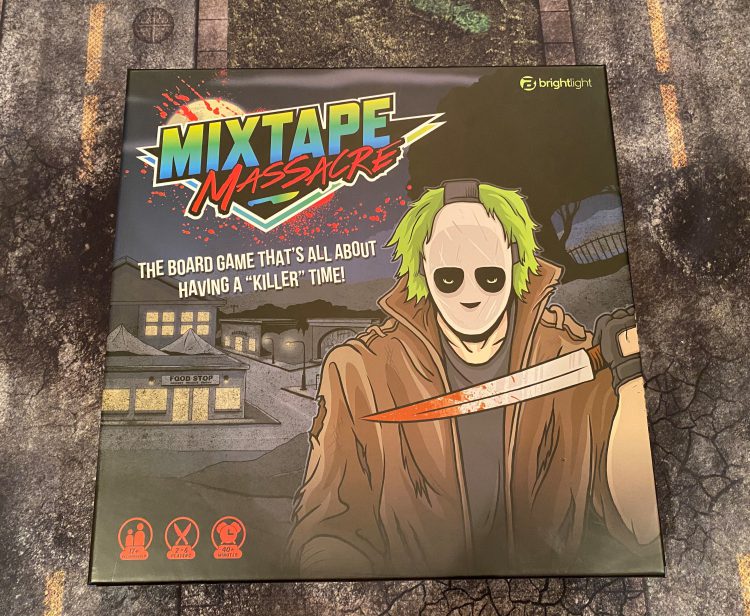 Before I get into gameplay the first thing that needs to get covered is how this game looks and feels. It has a cartoony and simple art style that gives it a very relaxed feel despite the topic of the game (killin teens!). Basically, this game is meant to be fun and while it says “+17 of age” on the box, this is 100% not an adult game, both in presentation and complexity.

The board is simple enough. The town of Tall Oaks is laid out with over a dozen key locations, the sort of places you’d expect to find in an 80s horror movie: The Mall, The Arcade, etc. It is worth noting that this is largely cosmetic as the specificity of the locations rarely matters. Each character/monster archetype is appropriately cartoonish but easily identifiable with at least a couple well known horror movie properties.

The game is awash with references to not just horror movie tropes, but also the general culture of the 80s, which you would expect from a game that has “MixTape” in its title. The game comes with what feels like the “right” amount of pieces and aids to justify its price and set the mood without going overboard with loads of rarely used or unnecessary parts that games like Betrayal at House of the Hill have. 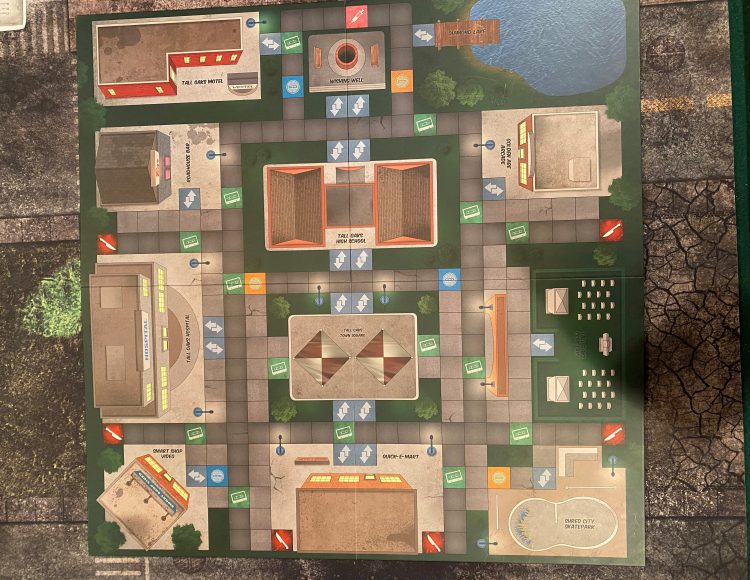 Each player selects their killer and then rolls off to place them at one of six fairly equivalent starting spots. The game is then played by each player rolling a D6 to move their character around the board in an effort to kill one another or go to one of the dozen or so locations described earlier so that they may draw from the “Killer Scene, DUDE!” deck which is how one acquires victims. Cards in this deck come in two flavors, one where players are trying to murder a victim or victims, or defend themselves from said victims who decide to fight back. This is all presented from the viewpoint of the killer, and are almost always direct references to horror tropes. You’ll see: people splitting up to cover more ground, taking a shower, getting drunk at a party, the final girl, or even get your degree [Ed: not really]. This is done by rolling 3 dice, that each have 3 different types of symbols on them: a knife, a fist, and a pentagram. Knives are required to claim victims, fists to defend yourself when victims attack, and pentagrams do nothing unless you get 3 of them at which point you automatically beat your drawn scenario, and get extra “points” in the process.

Scattered throughout the town are a few other types of tiles: sewers that act as warp paths, a healing location, and bonus tracks. The first two being somewhat self explanatory, and the third being a deck of cards that produces random harmful or helpful effects. 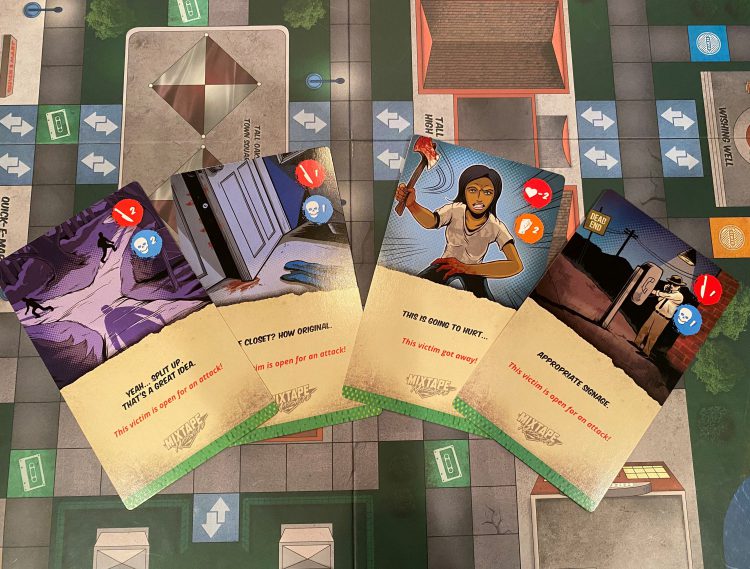 Each player has six health points to start and with very few healing options the game can be very lethal if the players decide to attack one another. This occurs when the players end up adjacent to one another or try to occupy the same location and is performed by a roll-off, the winner being the player with the most knives, which in turn deals a single point of damage and returns the loser to the nearest starting location.

Each character type also has a single use special ability, which admittedly varies wildly in their usefulness, some being very situational, while others are always useful. I am happy to say that none of these abilities are game breaking and while the better ones provide an “edge” they by no means are anything like a guaranteed victory. In fact, I have chosen the better character in every instance I played, lost spectacularly, and then only won once I had randomly chosen what I considered a lesser character.

Lastly, when players claim a victim they enter into a killing spree which basically allows them to take another turn by rolling the D6 to move and doubling the result, and largely the primary strategy to winning the game by positioning yourself on the board in a way that allows you to keep a continuous killing spree going. 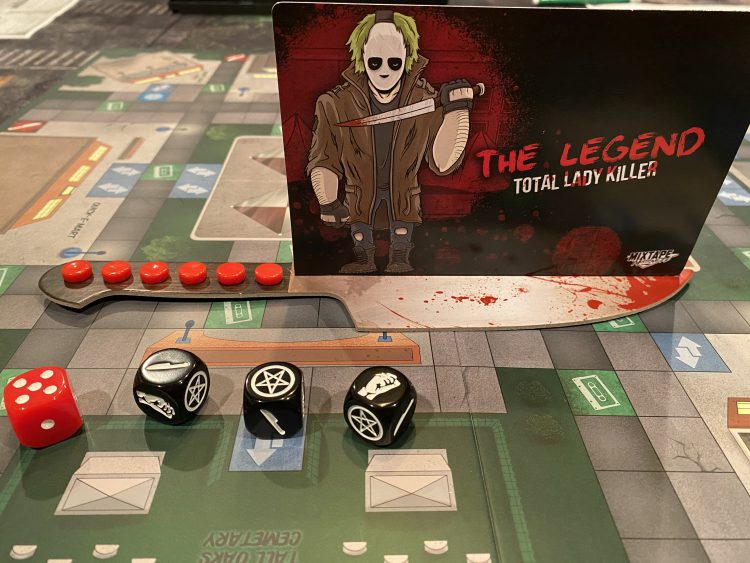 In a word, yes. While it lacks the complexity of some other board games, it is a perfect party game. Matches last only 30 minutes on average, and it is very easy to learn. In addition, it has some interesting alternative win conditions and play styles in the back of the rulebook to keep things fresh. As a testament to its simplicity, said rulebook is only about 4 pages long, and new players can very easily win and not feel like they’re at a disadvantage against more experienced ones. I give it a 4 out of 5 stars, not a 100% buy, but perfect if you enjoy horror and like having games that are easily accessible for friends and children. I played this with my 8 year old, and they had zero issue understanding the rules.