Among the wave of new plastic kits for the Horus Heresy is an all-plastic version of the humble Deimos Pattern Predator, formerly a resin/plastic hybrid. Games Workshop sent us one to review; let’s check it out.

Most of this kit is the same basic build as the Deimos Pattern Rhino. If you’ve built one of those, much of the early part of this will be identical, with the exception of the door pieces being replaced by the mounts for the sponsons. Those pieces come from one of the three frames specific to this kit: 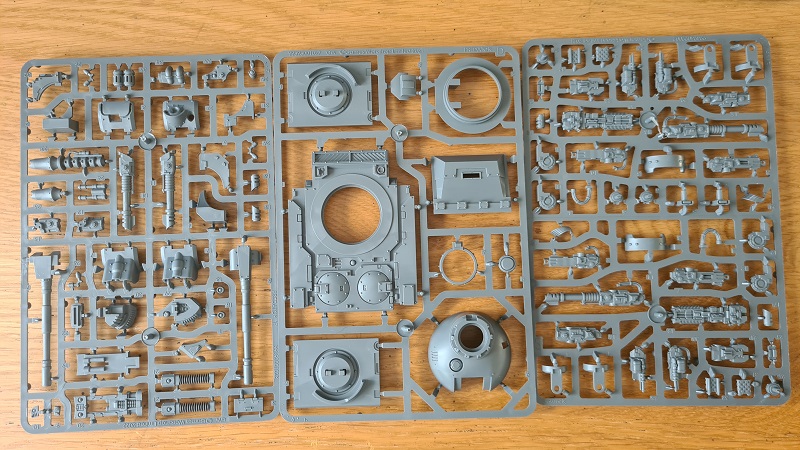 One contains the structural bits for this kit – the top plate of the hull, sponson mounts, and turret – while there’s one sprue each for main guns and sponsons.

Sponson-wise you’ll get everything you might have hoped for here. It’s a complete set of the options available on the unit’s profile – heavy bolters, heavy flamers, lascannons, volkite culverins – on a similar sponson design to the ones we saw previously on the Land Raider Spartan. Great news for anyone who built the 40k Predator and watched in despair as the tiny little sponson join inevitably snapped off, bad news for anyone who doesn’t want to build their sponsons in 9 pieces each.

On top, you get a choice of main guns, but not an exhaustive one. On this sprue you get the Predator cannon, volkite macro-saker, twin Gravis lascannon, and graviton cannon, and that’s your lot. No sign of the magna-melta cannon, flamestorm cannon, executioner plasma destroyer, heavy conversion beam cannon, or neutron blaster. Presumably these will be along in another kit later down the line, a bit like the Leman Russ Battle Tank/Leman Russ Demolisher situation in 40k, or perhaps they’ll continue to only exist in resin form. Personally, I plumped for the classic “all the lascannons” approach, with las sponsons and twin Gravis las on the turret; if I’m going to run this thing it’s going to sit at the back spitting lascannon fire at things and hoping everyone has bigger Contemptor-shaped problems to deal with.

Besides the sponsons being a bit fiddly and the well-known stiffness of the bottom of the hull from the Rhino kit, it’s a straightforward enough build. Neither the sponsons nor the turret really encourage magnetisation in the way the Dreadnought kits do; there’s no conveniently-sized magnet holes or anything, so if you do fancy magnetising you’ll need to break out the drill and get to it yourself. With this many options it may well be worth it.

Overall it’s a kit that does exactly what you expect it to; you purchase one Deimos Pattern Predator and you get one Deimos Pattern Predator. The only real criticism that can be levelled at it is that it would have been better to have all the guns, rather than four of a possible nine, but for now my little lascannon tank will make do by inefficiently shooting a Contemptor before being meltad off the table.