Ruleshammer: Moving Whilst Near The Enemy

Although we love Warhammer 40,000, the game’s complexity can be daunting, particularly for newer players. In Ruleshammer, we look at the nuances of the game’s rules and how they affect gameplay, clearing up potential issues and helping make sense of some of the game’s less common interactions. In today’s Ruleshammer, Rob “Vre’kais” Chilton covers some of the quirks of the movement phase, specifically the rules about moving around enemy models.

First let’s look at the movement rules themselves!

A model can be moved in any direction, to a distance, in inches, equal to or less than the Move characteristic on its datasheet. No part of the model’s base (or hull) can move further than this. It cannot be moved through other models or through terrain features such as walls, but can be moved vertically in order to climb or traverse any scenery. [Core Rules Pg3]

The line I’ve highlighted in bold is important as it establishes something about moving models, when you move a model it doesn’t leave the board. It has to take into account what’s in the way and move around those obstacles if possible. Some models might have a rule or keyword that helps do this, such as INFANTRY which can move through the walls and floors of Ruins. This article will be about how this fact interacts with the Enemy Models rule;

All models in the same army are friendly models. Models controlled by an opposing player are enemy models. When you move a model in the Movement phase, it may not be moved within 1″ of any enemy models.

Now that the fact that models don’t leave the board is established this rule becomes clearer. It doesn’t just say that models can’t end the move within 1”, it more broadly than that says they may not be moved within 1”. Just like how models cannot be moved through other models.

So they can’t be closer than 1″ during or at the end of the move.  What does this look like? 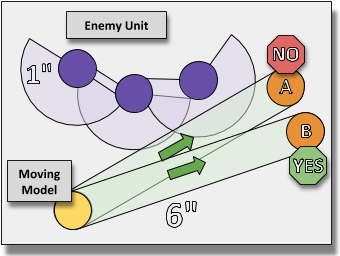 Models need to move around as shown and can’t just casually stroll past the enemy as if they weren’t there. In the diagram above the model can’t move to position A because it would pass too close to the enemy unit. You don’t have to move in a straight line like in this example though, so you could find a position closer to A if you wanted by moving around.

Are they any exceptions?

There are; one of the most common ones is the FLY keyword. This has been FAQed a few times so here’s the latest wording.

This sets up FLY to work differently in each phase, it wasn’t like this from the start though and it’s led to some confusion. Here’s a slightly more succinct summary of how FLY affects movement in all the phases. 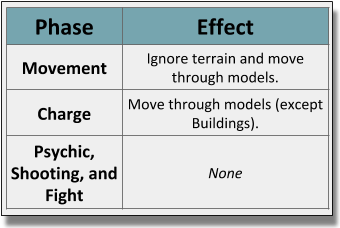 The changes to FLY were drastic, but mostly put in place to avoid 0” charges from the base of a Ruin to an upper floor. There are a few interesting things about these effects though:

The other fairly obvious exception is the Fall Back move;

Units starting the Movement phase within 1″ of an enemy unit can either remain stationary or Fall Back. If you choose to Fall Back, the unit must end its move more than 1″ away from all enemy units. If a unit Falls Back, it cannot Advance (see below), or charge later that turn. A unit that Falls Back also cannot shoot later that turn unless it can Fly. [Core Rules Pg3]

This allows the movement so long as you can end the movement with the entire unit more than 1” away from enemy models. It’s important to note that if even only one model in the unit is unable to end that move more than 1” away, then the entire unit is unable to fall back. You can’t use the Fall Back rule to move the rest of your unit to a better position for the next charge and fight phases.

I plan to do a more in depth article on this keyword and on the FLYER battlefield role in general, but they are definitely worth a mention here based on how much GW has added to the rules for them since launch. Here are the relevant AIRCRAFT rules;

If, when a unit is selected to move in the Movement phase, the only enemy units that are within 1″ of it are Aircraft, then it can still make a move (i.e. it does not have to Fall Back in order to move).’ [Core Rules FAQ Pg1]

Essentially when moving near enemy AIRCRAFT you do just need to end the move more than 1″ away from them. You still can’t move within 1″ of other types of enemy model though. The rule does go a step further and say that even if you do start a move within 1″ of enemy models which all have the AIRCRAFT keyword; you can move normally and it doesn’t count as falling back. That’s just the bits relevant to today’s article though, the AIRCRAFT keyword has plenty of other quirks to cover.

What else does this affect?

Well it can lead to some interesting mechanics for particular models which on the surface might seem odd, like the Space Marine drop pod. It’s been FAQed a few times, here’s the latest;

Q: Which part of a Drop Pod should I measure distances from and to, especially if the model has been assembled so its doors can be opened or closed?

A: Measure all distances to and from any part of the model, including its doors. If this model has been assembled such that you can lower and raise its doors, then when this model is first set up in the battlefield choose whether the doors will be lowered or raised – you cannot raise or lower the doors thereafter during the battle.

What does this mean? It means that the Drop Pod creates a pretty wide and frankly oddly shaped area around it that models can’t move through. You can’t climb over the doors of a drop pod because it’s not scenery, it’s a model. If you were to drop two of these so that their doors were less than 3” apart then enemy models can’t pass through that gap.

This is effectively using drop pods to create an impassable wall for the enemy but not their own army. Models from the Space Marine force would need to filter through this gap, so it does form a bit of a bottle neck. 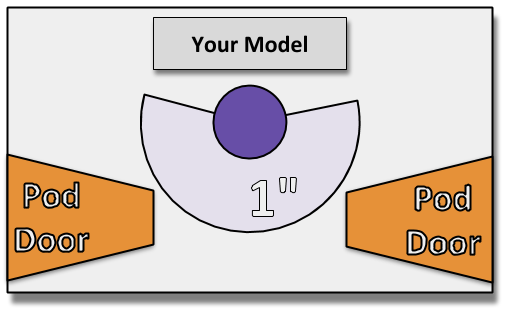 What about embarking in Transports?

This one might seem obvious but it was vague enough to get an FAQ. The core rules lay out a rather simple criteria for embarking in a transport.

If all models in a unit end their move within 3″ of a friendly transport in the Movement Phase, they can embark within it. [Core Rules FAQ Pg2]

However this doesn’t mean you can move through models to get into the transports still, as answered by this FAQ.

Q: Can a unit that is within 1″ of the enemy and entirely within 3″ of a friendly Transport embark into that transport without having to move? For example, because they cannot Fly and would have to move through enemy models?

This makes it pretty clear that despite how the embark rules are worded, your models need to be able to reach the transport to get in and they still can’t move through enemy models. Unless they have an ability/keyword to do so such as FLY, my guess is they jump over and use a another door? Maybe a top hatch?

As ever there’s more discussion on this and all other Ruleshammer articles here. Or drop us a note in the comments below or email us at contact@goonhammer.com.