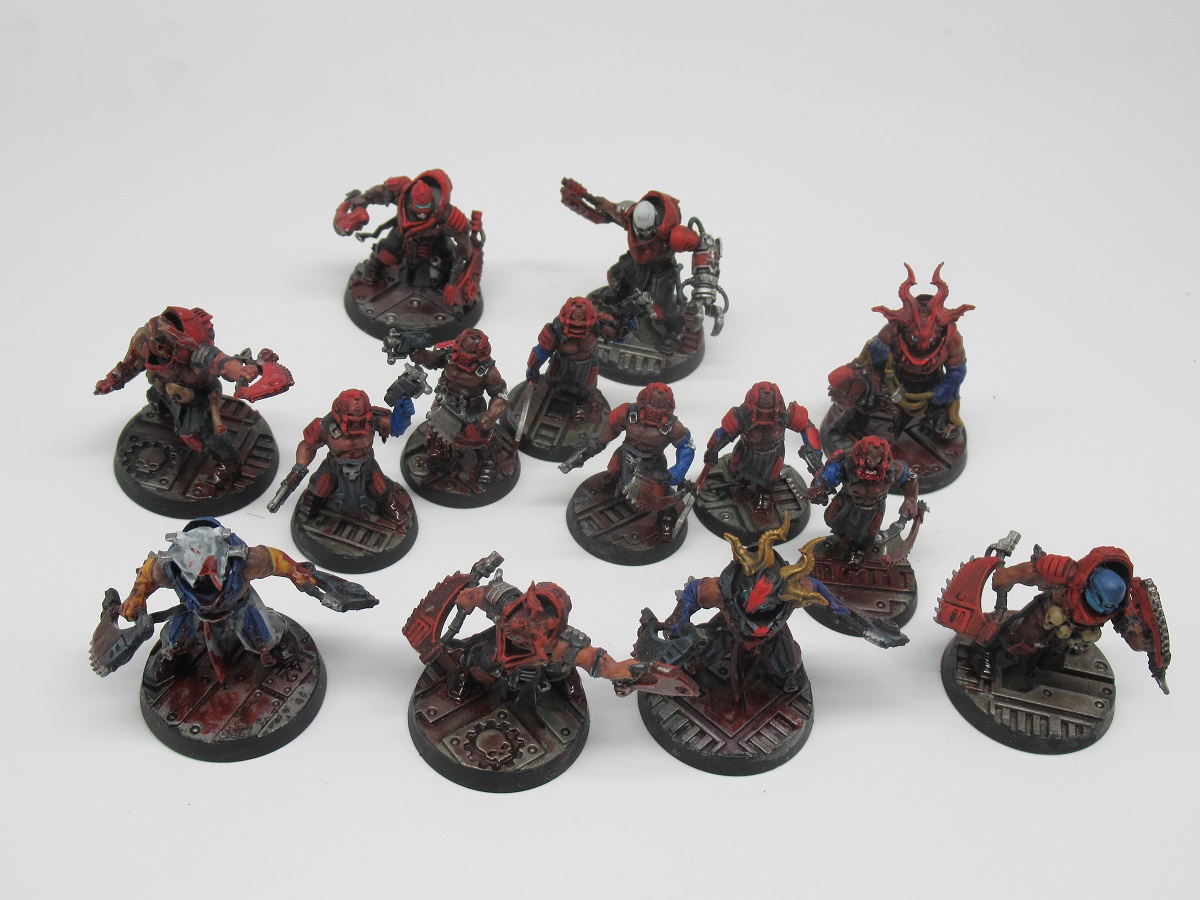 From time to time we take a break from tactics and strategy articles to look at the gangs that make the underhive a wonderful cacophony of violence. This week we’re looking at Thanqol’s Corpse Grinders gang.

When working on the final sections of my gaming table for Infinity, the Zone Mortalis scenery caught my eye. The fact that miniatures came in the box was an afterthought as I didn’t have a local group that I could play Necromunda with. Nothing is wasted, though – I often buy two faction boxes and harvest the less favoured force for conversion parts or use them as a basis for experimental painting projects. I find sticking to a single scheme for a long period of time to be a drag so I often like to do palette cleansers of random warbands, necromunda gangs, Infinity squads and so on. These Corpse Grinders were one such experiment.

I love working with the colour red, but when it came time to work on these Corpse Grinders I knew I wanted to do something different with it.

See, the default GW-Tutorial process to do a bright red is to highlight it with colours other than red – you start with a base of Mephiston Red, highlight with Wild Rider red and then go on to Trollslayer orange. That creates a great effect but I wanted to try getting a red that was highlighted with a brighter red, keeping it more firmly inside the original hue range. A Necromunda gang seemed like the perfect place to try that out. 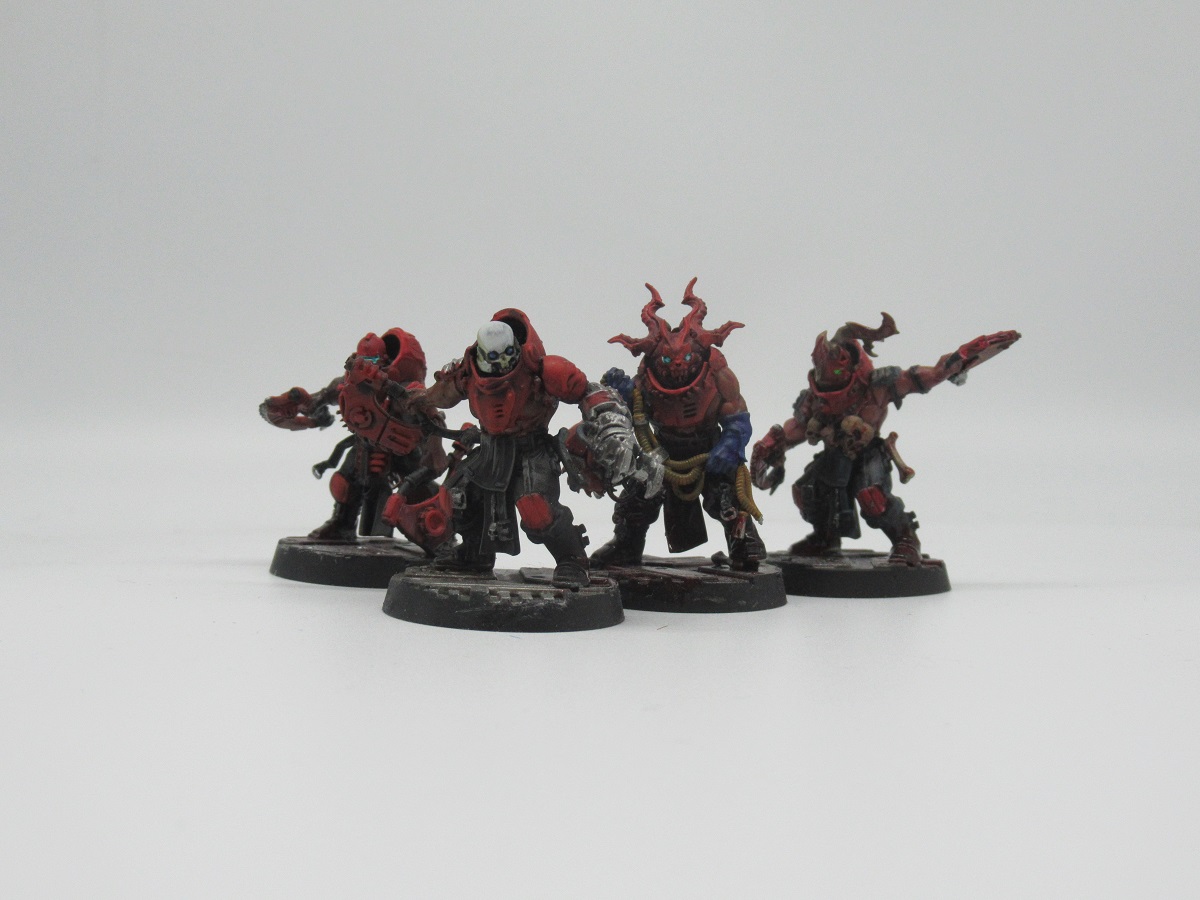 So I decided to experiment with glazes. I primed all of these models black and then sketched all the highlights in white. After that was done I thinned down Mephiston Red (which is as close to a 255/0/0 pure red as a paint ever was) until it was a glaze and gently went over the armour panels with successive layers. Eventually it built up a red that had an almost eerie character to some of the highlights that I really liked.

But this method is a *lot* of work. It’s very time consuming and very demanding compared to base-wash-highlight. I definitely wouldn’t do it for anything larger than a Necromunda gang, and even within that I was getting fatigued of it towards the end. 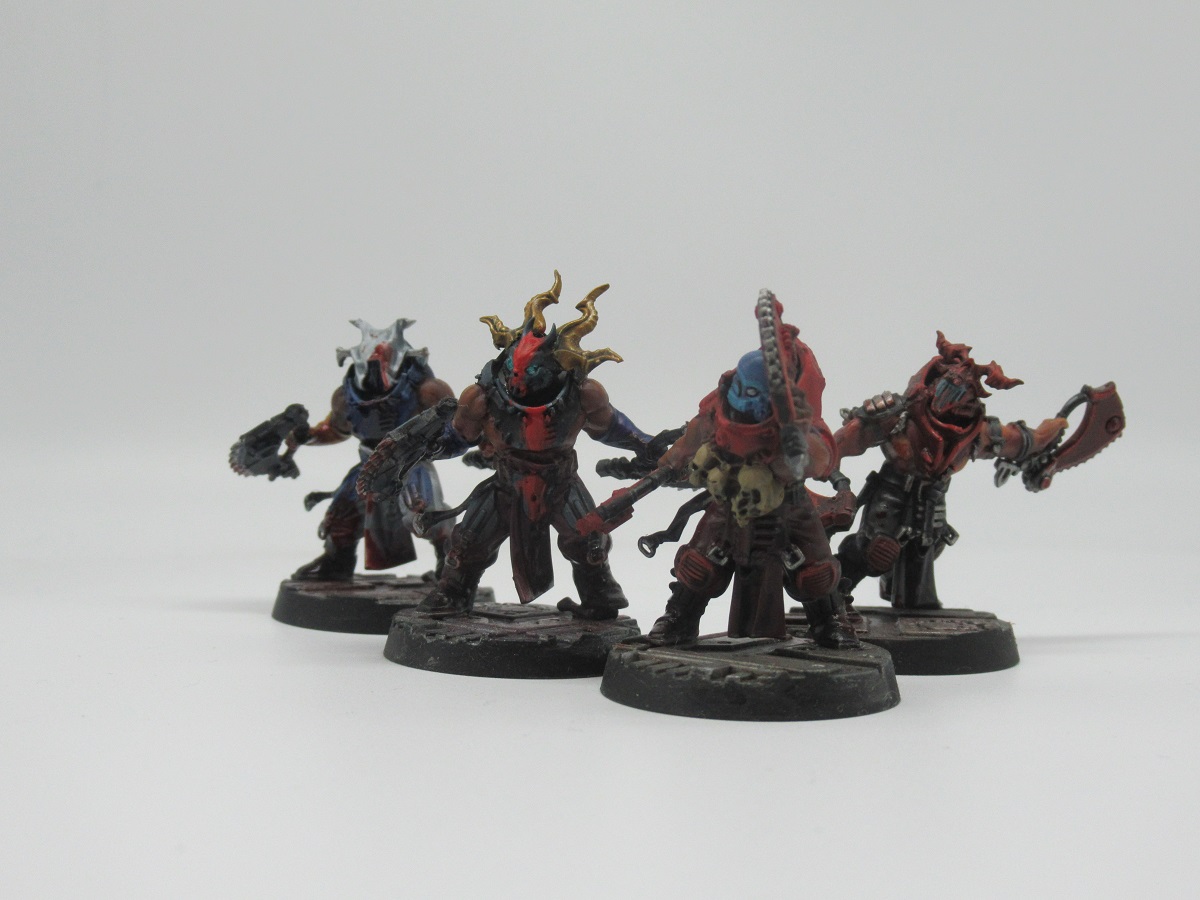 As I build and paint little narratives emerge. I keep a limited selection of colours on my desk when working on a project but switching them up or inverting the scheme for a model or two can give a figure a lot of individuality without losing the coherence of the force. The blue and white one in the back was me using the colour of the blue rubber gloves worn by many of the butchers as the primary colour; I decided from that this one was The Health Inspector, the man in charge of making sure that the meat was only ever the highest quality. The one in black and gold was The Demon, a latent psyker who had visions of the Black Legion and considers himself their earthly representative. Hungry Man, the one with the white skull mask and the servo-arm, got his name after a memorable incident where he got home to find the fridge empty and figured he only needed one arm to operate a frypan. 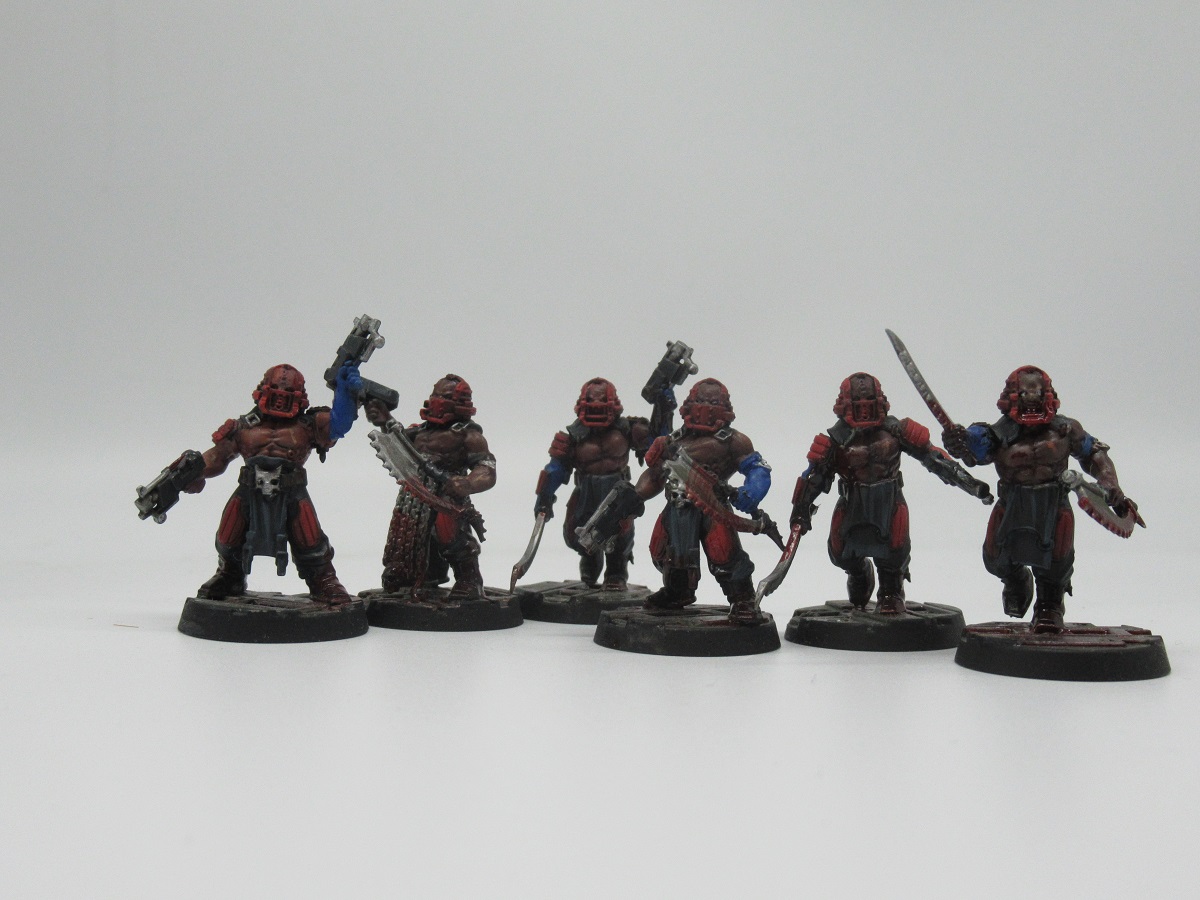 My other little discovery in this project is how easy it is to add scars, especially on dark flesh. if you paint a model in a dark skintone a simple line of Bugman’s Glow makes a really effective one-brushstroke scar. Likewise, you can and often should thin Blood for the Blood God down with water and otherwise generally do all the things you shouldn’t do with a paint to it. Random stippling, streaky drybrushing, watering it down until the surface tension breaks and then dragging it in a downwards direction, mixing it with other colours – just because it’s a technical paint doesn’t mean it stops being a paint and you can get all kinds of weird and cool effects if you mess around with it. At one point I mixed a little of it with some watered down Carroberg Crimson and it got a really cool dried bloodstain effect on the bases. Less is more with blood effects, but less doesn’t necessarily always mean just using less paint.

That wraps up our look at Thanqol’s Corpse Grinders but if you’re looking for more about how to play them, how to paint them, or how to avoid them at all costs to avoid getting turned into a fine pink mist, check out one of the following articles:

Haven any questions or feedback? Drop us a note in the comments below or email us at contact@goonhammer.com.