What’s this?! It’s not Monday! Who let the Necromunday idiots out of their sewer pipes? Well, dear Scummers, when GW releases a FAQ document for our favorite game, we’re here to guide YOU through its important points. GW even forgot to do the thing where they put all the new text in magenta, but we got you, Scummers.  We studied each FAQ document closely to find all the changes and let YOU know about them.

You can find the brand new FAQ here. It seems to be working, so drop GTW a line over at necromundafaq@gwplc.com and keep asking those questions!

For today, here’s what you need to know:

In a huge ruling, Hired Guns’ (Bounty Hunters, Hive Scum, etc.) weapons and wargear are now explicitly part of their hiring fee, instead of a cheeky secondary charge. This is a great change and makes a ton of sense.
It also codifies how to use free Hired Guns given by a territory, racket, or whatever: Gangs still pay for the equipment given to Bounty Hunters hired normally, since that equipment is part of the hiring fee, but Bounty Hunters recruited for free now come with their own allowance for gear. If a player doesn’t have to pay the hiring fees for a particular Hired Gun, their gang is no longer on the hook for Hired Guns’ equipment. Hallelujah.

We had been running it this way in our campaigns, but now it’s for real and Hired Guns are finally starting to feel right.

Previously, the framework for what weapons Enforcers could use from the Trading post was not very solid. Now, GW have given us a concrete ruling: any Enforcer can use anything they buy from the Trading Post without restrictions. Rookie with a Melta Gun? Check. Patrolman with a Yu’Vath Puzzle Box? Send it. Sergeant in a full servo harness with Kharn the Betrayer’s personal chainaxe Gorechild? What? How did that get here? Kharn’s gonna be PISSED. Finally, Precinct Missile Launcher can live up to its name. 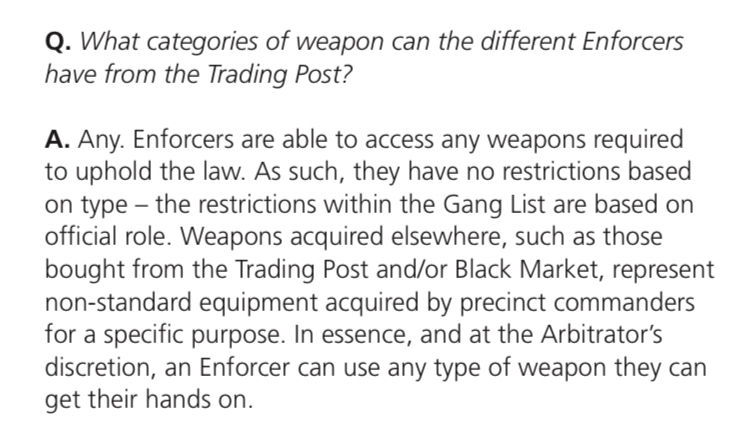 Now, this doesn’t mean that you or your Arbitrator has to allow this! Weapon access for Enforcers can still be houseruled as restricted, just as easily as it was house-ruled as okay before.

Some minor clarifications for Corpse Grinders:

Honestly, there’s not much to see here. The Fighter-type change is a sentence added on to that initial FAQ answer, and the Mask thing makes sense when compared to how Fighters change over the course of a campaign.

A few pretty minor fixes for the Brand New House of Blades book that came out four days ago. Kudos on getting these out so quickly, GW!

There’s only one change for Goliaths and friends, as Djangar ‘Gunfists’ from House of Chains can finally live up to his name. His Custom Stub Cannons now have Sidearm, allowing him to take full advantage of his Gunfighter skill and live out his Matrix cosplay dreams.

This FAQ is nowhere near as meaty as the December 2019 FAQ, which made some pretty big changes to the game. It does, however, offer up some important clarifications.

The Bounty Hunter clarification goes a long way to make this oft-maligned choice actually usable, and we’re very glad to see it happen. Enforcers being able to use whatever weapons they want from the Trading Post makes sense for the reasons they’ve given, but Dan has reservations on how this will impact game balance, such as it is. The rest of it is all pretty minor, but we’re glad to have it anyways. And again, it is awesome that GW was able to put this out 4 days after the House of Blades hit stores. Good on ya, GW!

All in all, we’re more than happy to be surprised by this FAQ today. There’s always more to fix and fine-tune in Necromunda, so we’re not going to hem and haw about GW not going far enough, but at least we didn’t have to wait over a full year for a FAQ this time!

Today, GW made a couple changes that took some of the jankier rules in the game and made them play out more akin to how the players desperately wanted them to function already. Necromunda has an ungodly amount of mechanics already, and the less time we have to spend saying “no that rule is dumb, let’s run it this way instead,” the better.

Thanks for reading, Scummers! We’ll be back in our regular slot next week with our updated guide to House Escher, so until then, stay frosty!