Necromunday: An Introduction to Alliances

Happy Monday, Scummers! Do you ever feel like your gang is missing something? Maybe you’ve lost a few fighters over the course of your campaign, or one of your opponents lucked into some serious weaponry, and you’re lagging behind. Fear not, for there’s a quick and easy way to get caught up: Alliances. This week, we’re kicking off a multi-part series where we do a deep dive into one of the most controversial and powerful aspects of our favorite game.

Previously the domain of those mad kit-bashers and conversion artists, the optional rules for Alliances were mostly a browsed-past novelty to players and Arbitrators alike. Now, with spiffy new official models for the Mercator Sanguis and the introduction of Strong Alliances in House of Chains, more players are becoming interested in dabbling in the system. There’s a ton of depth to these rules, both on the narrative and gameplay side, so we’re going to be devoting a decent amount of time to Alliances. For today, let’s drill in and figure out how the whole thing works! 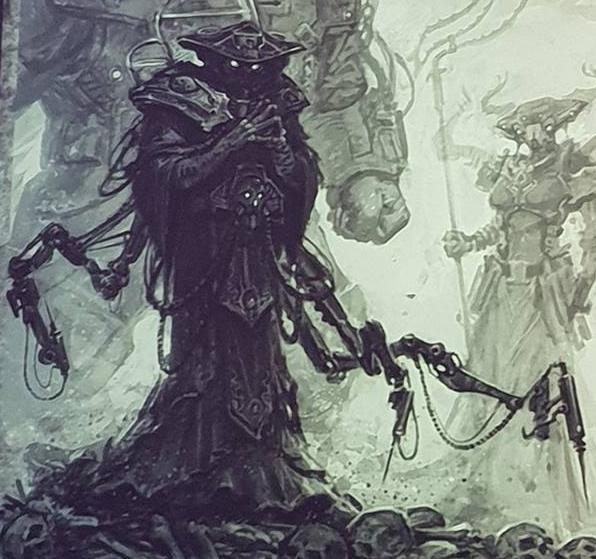 Gangs and Houses aren’t the only organizations in the Underhive. There are mercantile guilds, criminal enterprises, and scions of wealthy nobility, all with agendas and goals. Occasionally, these goals can temporarily align with those of a common street-level gang, and a mutual understanding can be struck.

On their own, entering into an Alliance is pretty straight forward – just do it! Assuming they haven’t been restricted by an Arbitrator, players may start off a campaign in an alliance of their choice or sign on to one before the beginning of any game. If the alliance is broken (either willingly or unwillingly), though, the player will be restricted from entering into another or reforming the failed compact until at least the next campaign phase. These guys are the big leagues, and they require dedication!

Alternately, in a Law and Misrule Campaign, certain Rackets will automatically form an alliance with a designated guild when gained.  These alliances aren’t automatically broken if the player loses control over the racket, but will provide the guaranteed option to field that faction’s in-game retinue of Guild Representatives whenever desired. These rackets are of lesser use to players already in a different alliance or of the wrong alignment in the campaign (Guilders won’t work with Outlaws, go figure!), but in that case a consolation prize of free Hive Scum and Bounty Hunters helps lessen the embarrassment. 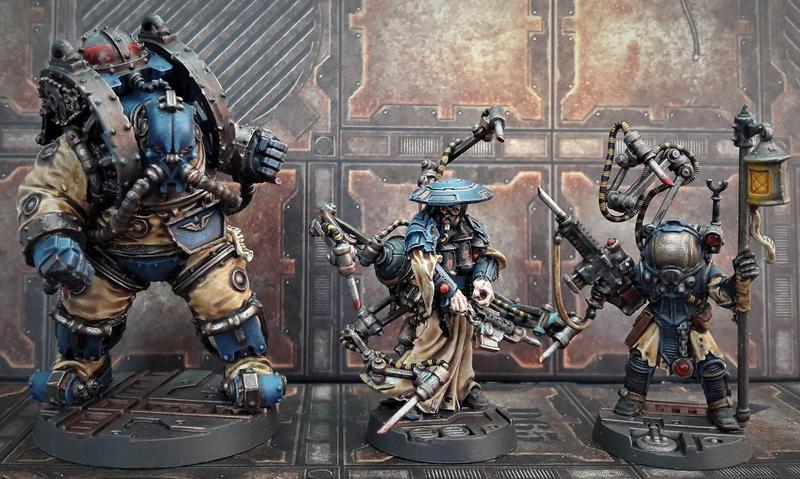 We’d assumed for the longest time that it was all an excuse to kit-bash up some insane conversions and get as close to the rad concept art as our bits boxes would allow, but it turns out that all of these factions bring some potentially game-changing buffs to the battlefield, and some occasionally crippling penalties when you don’t follow their lead!

When they’re happy, we’re happy. All Alliances offer a blanket bonus to their associated gang, provided that they’ve been following the rules and obeying orders. Certain Alliances grant easier access to rare Xenos weaponry, offer bonus credits for every scenario won, or even full re-rolls on all Lasting Injury rolls!  Depending on a player’s gang and desired play-style, and especially considering that a campaign can be started with an Alliance already active, narratively minded players can even lean in and build their gangs around these buffs, fully intending to claim each victory in the name of their eternally beloved patron.

Those abilities are only part of the carrot for most players, as Alliances can also allow their own representatives to take part in a battle as a sort of Retinue.  These extra fighters provide the muscle and guile needed to advance the alliance’s interests in addition to a gang’s usual complement of crew (certain restrictions apply, for some). Functioning as their own sub-gang, these retinues bring extremely on-brand fighters with their own leaders, champions, and unique abilities.  The Flamer-toting Pyromagir of the Promethium Guild is a terror in his own right, but when the retinue uses their ability to hit the lights and cause the Pitch Black rule? Now we’re talkin’! 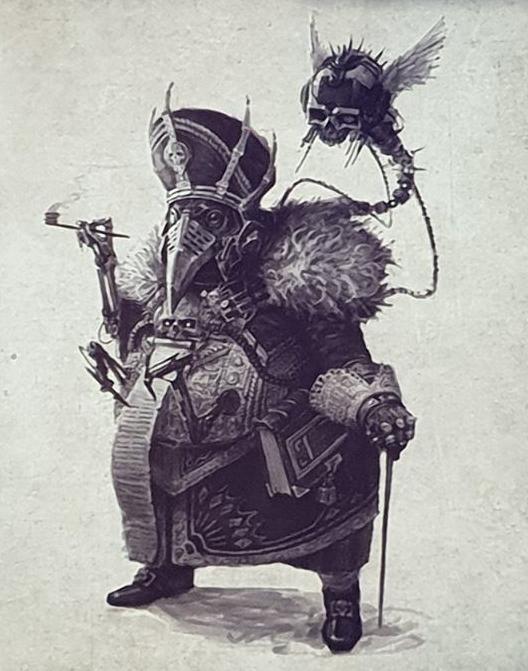 We’ve mentioned the carrot, now it’s time for the stick. As willing servants to the Bigger Picture, every Alliance comes complete with their own quirks and stipulations. While allied, gangs are completely forbidden from taking advantage of Sub-Plots and from rolling on the House Favors table, as their new benefactors frown on their wards having split loyalties. Gangs lose a measure of free will in situations where they’d elsewise be allowed to choose a scenario, instead being compelled into guarding a VIP on an Escort Mission or babysitting a loot-filled Caravan under the watchful supervision of a mandatory allied retinue.

This is in addition to each Alliance’s unique drawback, which ranges from a minor credit tithe after a victory, to their opponents gaining a free Bounty Hunter each game to use against them. These downsides can be severe, but typically the good heavily makes up for the bad. Besides, if you’re feeling cheeky, you can always just tell ‘em to get stuffed and Test the Alliance instead!

Saying no to your superiors can have hefty consequences, especially if you intend to make a habit of it.  Choosing to disregard a drawback, or declining the (secretly not very) optional assistance of a retinue in a chosen-on-your-behalf scenario, may trigger a d6 roll on the Testing the Alliance Table.

Initially, the odds are in a player’s favor that they’ll merely let it slide with no effect. On a 5+, however, for the gang’s next battle all Benefits are shut off, leaving only the Drawbacks active as a harsh lesson on disobedience. Further tests become increasingly difficult, as players add 1 to their rolls for each time they’ve tested before in that cycle. At this point as well, the Ally may just up and leave, breaking the Alliance immediately and permanently on a 7+.

The Fixer Hanger-On can provide a small buffer, subtracting 2 from Alliance Test rolls, making them a wise investment for gangs willing to play fast and loose with the terms of their contract. In general, though, it’s probably better to just follow the rules – surely the Alliance has your safety and best interests in mind!

If your gang has a Strong Alliance with a given sub-faction, the first test of a cycle is automatically passed. This currently only applies to Goliaths when allied to the Slave Guild, the Narco Lords, or House Greim, but we’d expect each gang to gain their own preferred trio as the rest of the House of Chains-style books come out. 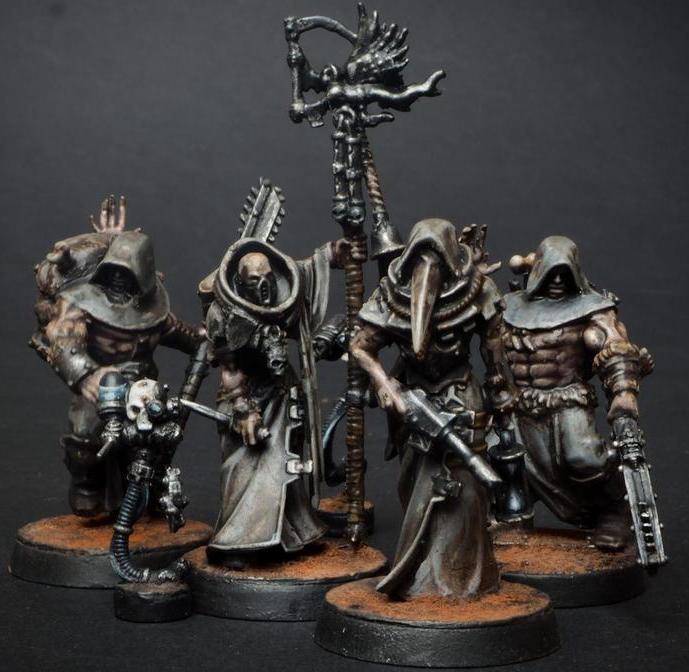 The Corpse Guild she tells you not to worry about. (Insta: @atelierdesnerds)

Between Benefits, Drawbacks, and Retinues, there’s just way too much to cover with Alliances in a way that we’d be able to do ‘em justice in a single article. We’ll be covering each of these factions in depth in upcoming articles and linking back through here soon. For the first two, at least; it’s going to be a while for the Noble Houses to fill up!

The Guilders are what you’d get if you crossed a corporation with a civic organization like a police force. They own their trade, and they have the right to permanently neutralize anyone who interferes with it. If you’ll looking to form a bond with the Merchant Guilds, check out our full breakdown of all six factions Right Here!

The Guild of Coin (Mercator Gelt) 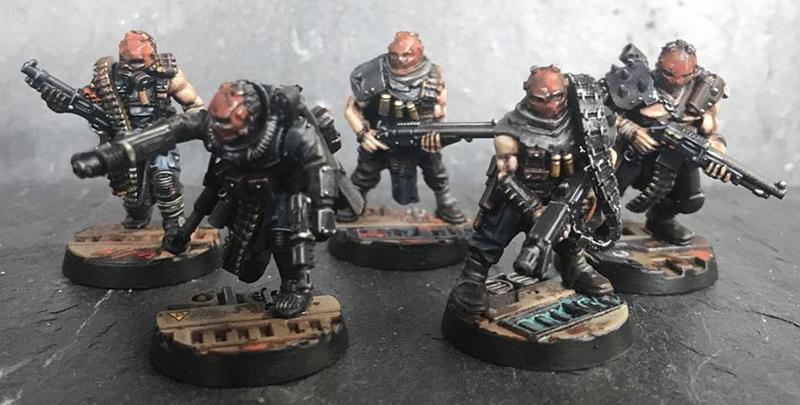 Tougher than the toughies. (Insta: @does_a_bear_paint_in_the_woods)

Necromunda is nominally a planet ruled by Imperial Law, but those remits fall short in many parts of the Underhive. There are any number of criminal enterprises ingrained within the hives, and less-scrupulous gangs will quickly make alliances within the dark underside of Necromunda. We’ve hit on all six of these shadowy organizations, and you can read all about them Right Here! 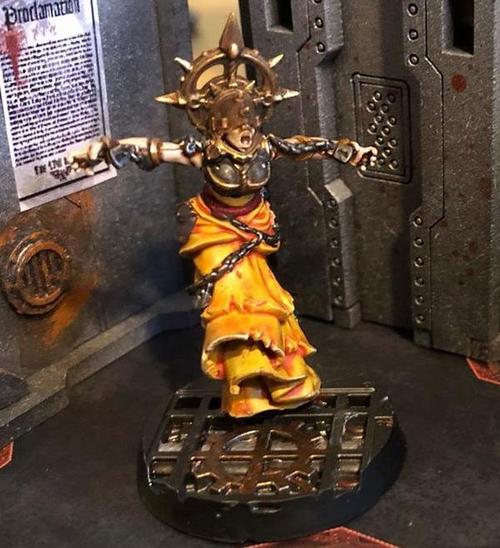 As each of the House Of X books is released, more Noble Houses offer their patronage to the seedy gangs of the Underhive. Their powers are vast and their motives inscrutable, so who’s to say what their ultimate goals are? All Noble Houses will be updated as they debut, Right Here. 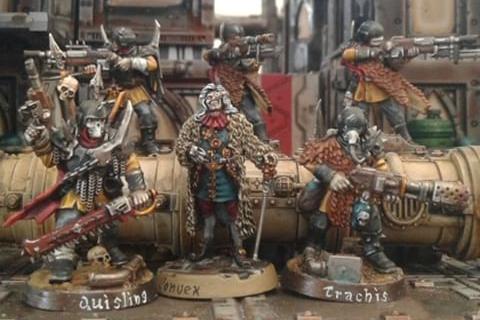 A milita second to none. (Insta: @caliumanderio)

When you consider how mutable and prone to constant modification a typical Necromunda campaign already is, it’s especially telling that the game’s designers have made sure to put disclaimers in each book, stressing that all of these rules are completely optional. They’re not wrong to do so! Alliances are a load of fun, and bring even more variety to the table, but they’re not a system to be implemented lightly.

In all honesty, there’s plenty of valid reasons why some Arbitrators may decide to eschew Alliances entirely. Free buffs and bonuses are always going to contribute to a massive power spike across an entire campaign, even if every player chooses to enter into one. Some of the choices offer outsized bonuses to their gangs and provide devastating retinues, with drawbacks that are laughably minor. Games drag on longer with model counts ballooning to 150-200% the intended crew size of a scenario.

And of course, provided a player meets whatever meager requirements the Alliance calls for, all this is completely free, both in credits and gang ratings. Put two identical gangs in a fight, and then swap out a juve on one side for two champions and two Ogryns, and that other gang is going to have a real bad time.

There’s a discussion in the community that having an Alliance should incur a raised Gang Rating while active, in order to at least allow those other gangs to invoke Underdog Bonuses when fighting crews with extra abilities and hordes of bonus dudes. We think that there’s some merit to this idea, and we’ll be exploring a variation of this when we get into the individual factions and figure out what they’re worth, but we’re not sure that this is the full solution.

Fellow Arbitrators, help us out here! If you’ve been using Alliances in your campaign, either straight-up or with some modifications let us know how it’s been working out for you and your group. Hit us up with your stories, or if you’ve figured out some tweaks to make it all flow a bit more smoothly!

Balance, in all things, for the Mercator Gelt. (Insta: @waaaaghtonio)

There’s no conclusion because we’re not done with Alliances yet, Scummers! This is just the first of five (wait five?!) articles on what we feel is one of the most compelling aspects of campaign play in Necromunda. Next week, we are going on a deep dive into the Merchant Guild alliances. We’ll explore their benefits, drawbacks, and, of course, look long and hard at their retinues.

Did you enjoy this article? Have questions? Did we miss anything? We want to hear about it! Drop us a line over at necromunday@goonhammer.com! We’ll see you next week, Scummers, and don’t forget to check your six!