We’re back, Scummers! Now that all the House books have dropped, the Underhive is a very different place compared to when Gangs of the Underhive was first released. The game has never been very well balanced, but with all this new stuff about, there are an ever-increasing number of rules which can bring a sense of unfairness to your campaigns. That’s very on-brand for life in the dystopian future, but it may interfere with your group’s fun. Today we’re going to talk about what particular things in the game might strike your group as ‘unfair’ and what to do about it.

Necromunda is a campaign game and any gang taking part in a campaign has a hell of a lot of different options to spend credits on after each game. To a certain extent, that’s the game’s balancing mechanism. Unless one gang picks nothing but top-tier, efficient weapons and the best equipment, and their opponents pick a medley of random trash, everything generally works. Most people will build their gangs’ rules to their models and aesthetic taste (the ‘Rule of Cool’) and with player skill and a hefty dose of Necromunda random outcomes thrown in, things balance out. But we have all heard of campaigns which devolve into an arms race of equipment combos, heavy weapons and stacking armour saves. This article is aimed at Arbitrators and players who are concerned about balance issues disrupting their campaigns.

Throughout this article, I will refer to certain things as “imbalances” – options which are very strong in most situations. Others are “mismatches” – when two gangs come up against each other, their rules and equipment may interact in way that favours one or the other disproportionately.

Are you House-Ruling as Needed, or at the Start?

There are two types of Arbitrators. Some want to put extensive house rules in place at the start of the campaign, make everything clear and try to fix the balance issues of the game. Some will only step in as needed, if a player does start to have a negative experience or start to ruin others’ fun. The latter approach saves effort, because there’s a lot of Necromunda rules to re-balance, you want your entire group to buy in and agree with house rules, and it can be a laborious process. Some groups enjoy trying to ‘fix the game’ and some have a strong bias towards playing out of the book without changes. I think this is a very important conversation for the Arbitrator to have with their group before a campaign. As well as understanding what gangs everyone wants to play (which will determine what imbalances and mismatches you need to worry about) you can see what experience everyone wants out of the campaign. Does anyone want to maximise the efficiency of their gang, and damn all other considerations? If one or all of your players have that approach, you may want to start putting some stops in place.

Do you need to worry on a basic level that some players will be at a disadvantage just by virtue of their starting gang type? This is a common question I see asked online by new players. With the ‘House of’ books now complete for the classic six Houses of Necromunda, they all get some unique rules (as well as House equipment lists). In roughly descending power order: Goliaths can do obscene things with Gene-Smithing and Cawdor Acts of Faith (and extra fighters in starting Crews) are very strong and flexible; Orlocks get neat cost-free bonus minor skills and Delaque have Psychic options which can provide a good alternative to normal shooting/fighting; Van Saar have Cyberteknika options which can open up some builds and mitigate injuries and Escher get Chem-Alchemy which is expensive for what it does but can boost some of their signature Toxin and Gas weapons. That’s not a ranking of the gangs in general – that’s a much longer discussion for another article – just how the power of their unique rules shake out. As with any aspect of the game, it’s your most competitive-minded players who will maximise these special rules, and Goliath and Cawdor are the only ones I would consider intervening on:

On the other end of the spectrum Enforcers, Venators, Genestealer Cults, Helot Cults, Corpse Grinder Cults & Slave Ogryn Gangs are all left to stand on their own equipment lists. While this seems unfair on the face of it, all of these non-House gangs have some strengths to leverage: Corpse Grinders especially are notoriously strong; Ogryns S5/T5 stats can have a skew effect if other players aren’t prepared; Enforcers have some good unique weapons and strong skills; Venators can mix-and-match effective shooting and melee profiles and cherry-pick their skill trees; Genestealer cults have a lot of weaknesses but at least get Psychic Familiars; Helot Cults, well, they’re not that great.

What are the Strongest Spammable Weapons?

Our initial recommendation here is that an Arbitrator should, if necessary, have a conversation with their players about spam and whether it’s in the spirit of Necromunda. I have a bias here, I never take the same loadout on two fighters in my gang. It’s one of my personal rules. While there are many weapon imbalances in Necromunda, that kind of guideline stops it being a real problem for campaigns – yes, your Delaque player’s web gun Phantom with the Infiltrate skill is terrifying, but there’s only one of him, he’ll shoot his shot and the rest of the game may go differently. The imbalances show more, and may cause some negative play experiences, when an entire gang is rocking some clearly-underpriced weapon. Some potential problem weapons: 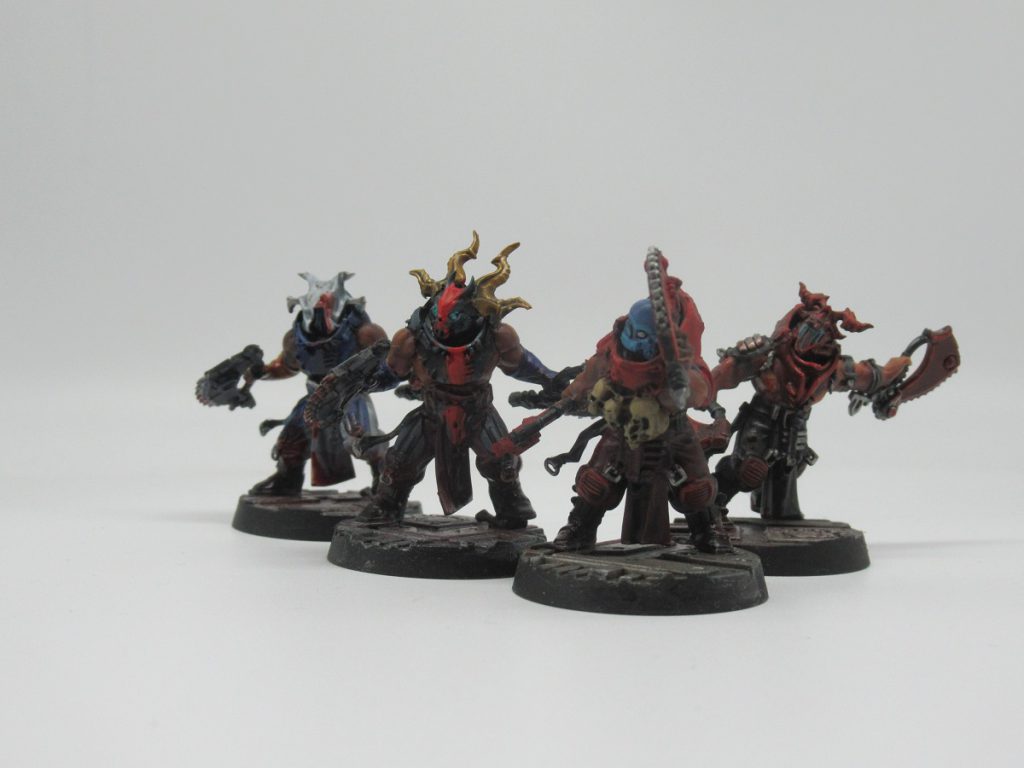 There is a definite theme running through equipment of wargear which is designed to defend against certain weapons. This is an interesting one as such tailored upgrades aren’t usually good value in a theoretical discussion. But if you know exactly who you’re facing, e.g. in small groups for a specific campaign, they can lead to a rock/paper/scissors effect which some players may not enjoy. Respirators give you a significant boost against Gas weapons, but they don’t nullify them completely, and they’re 15 credits each. Hazard Suits stop Blaze, which is very nice, but is it worth giving up the better armour save of Mesh Armour? These are more on the minor end and most competitive players won’t be leaning too hard on such match-ups. There are a few types of match-up which may have a more pronounced effect:

Some Equipment is just Bonkers

The Book of Judgment is a real culprit here. There is some bonkers stuff in the Trading Post section there. As a general rule, consider a ‘one per gang’ rule for a lot of the super esoteric equipment. The book introduces some really cool, RPG style equipment for gangs, but the best items are very open to abuse. Some particular problem children:

As mentioned at the start, there’s not necessarily any need to sit down and thrash out every balance issue in Necromunda before beginning a campaign. You’d go mad and spend weeks doing this before you could start playing games! Firstly, does your group need or want this kind of pro-active approach? Some players like to be assured everything is fair before they start, and some prefer to play ‘by the book’ unless it’s manifestly unfair. A few players want to win, and/or want to use all the best toys available to them, and damn the consequences. If your group all fit into one category, then it’s all good. If they’re a mix you want to either get everyone on the same page, or sort out a method that’s agreeable to everyone.

If you think we’ve missed anything off the list of potential imbalances/mismatches, you’ve had vastly different campaign experiences, or you want to tell us we’re dead wrong and a bunch of scavvy scummers, then feel free to write in! You can drop us a note in the comments below or email us at contact@goonhammer.com.