Welcome back to Necromunday, Scummers! This week we’re cracking open the thiccest box in GW History: Dark Uprising! While all the new terrain and models may interest other Necromundans, it’s the Uprising campaign that we’re all about! So join us as we break down all the new stuff! 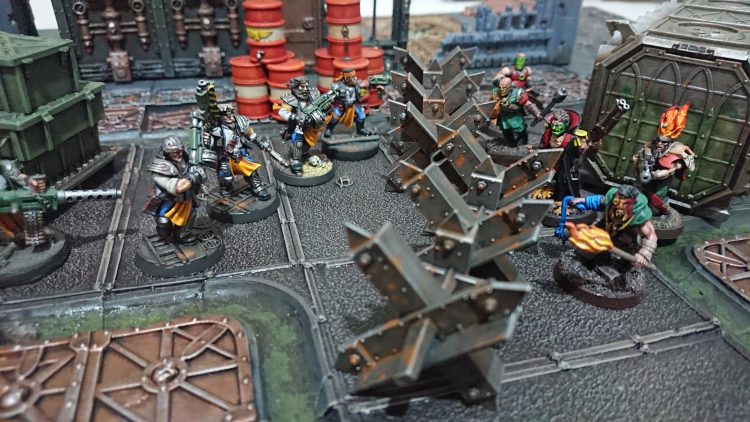 The Uprising campaign is the fourth campaign type released by Games Workshop. It was preceded by Turf War (which pretty much disappeared as it was half-baked), Dominion (Gang War 4/ Gangs of the Underhive), and Law & Misrule (The Book of Judgement). It’s more specific than the previous campaigns as it specifically tackles a Chaos-tainted incursion of violence, insanity, and cannibalism instead of “daily life” in Necromunda.

In addition to its difference in scope and theme, it deviates wildly from the other campaigns in its mechanical changes. While the Book of Peril added optional Campaign-wide effects for players to use, the Uprising campaign mandates their use with the Ascendency mechanic. This campaign also brings in mechanics like starvation and scavenging as the already inhospitable underhive quickly becomes a hellish nightmare realm of roving bands of cannibals that murder and devour their way through the hive. The Uprising campaign really hammers home scarcity and the importance of meaningful choices and makes you feel like you’re a part of a larger, unforgiving environment that the earlier campaigns don’t. 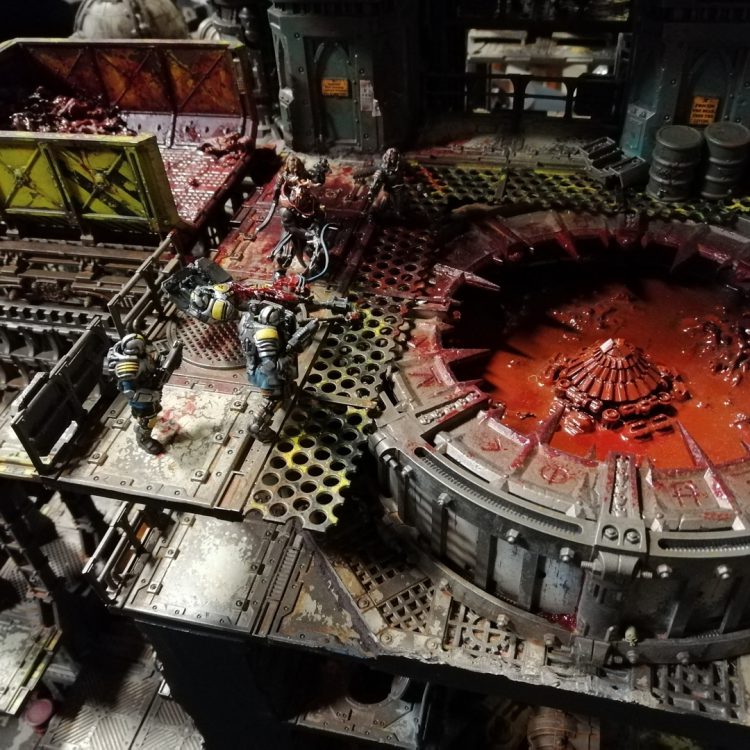 This is genuinely horrifying. Photo credit: jamstraptv via instagram.

Before we get too crunchy, we want to quickly touch on the lore in the Dark Rising Rulebook. It’s…extremely grimdark. It details the fall of Hive Arcos. Arcos was the meat processing center of Necromunda. And, to the uninitiated, meat on Necromunda means human corpses. Most protein consumed by hivers on Necromunda is from “corpse starch” which is the rendered and processed dead bodies of their fellow hivers. There is an entire guild, the Mercador Pallidus or Corpse Grinder Guild (not to be confused with Corpse Grinder Cults! Guild = good [kinda…] and Cult = very, extremely bad), that is dedicated to collecting and rendering corpses to feed the untold billions of Necromunda.

It is easy to imagine that the menial laborers for the Corpse Grinder Guild might suffer from some neurological maladies connected with their work. In a galaxy where technology is rare, expensive, and often misunderstood, biological machines are used to “process” meat on Necromunda. The stress of repeatedly butchering their fellow hivers causes many of these workers to lose their minds. It is the job of the Corpse Grinder Guild overseers to suss out these damaged workers and “dispose” of them before they go too far off the deep end. Invariably, some of these workers slip through the cracks and the insidious tendrils of Chaos find these vulnerable individuals. 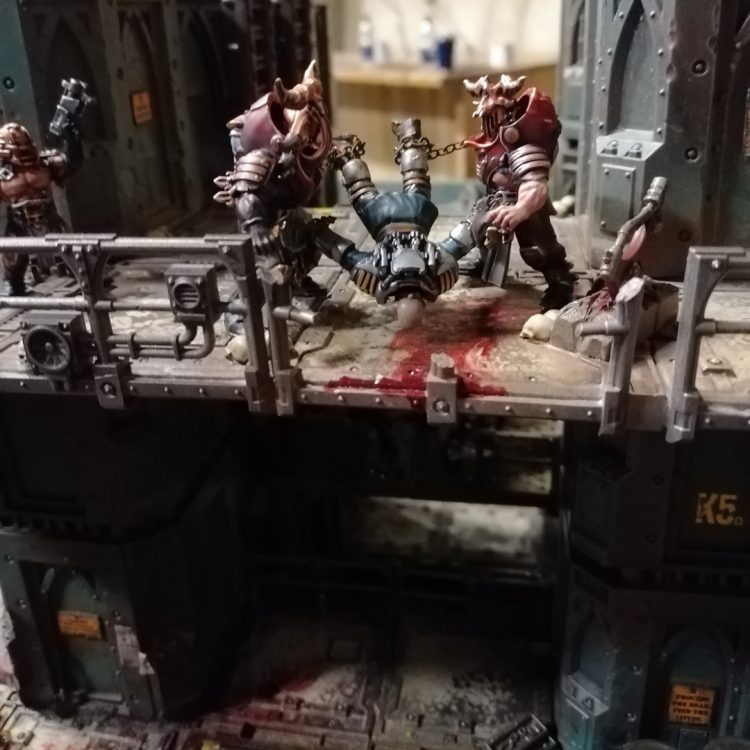 In Hive Arcos, it was a lowly meat-saw worker named Xor who become a host for the Blood God’s avatar on Necromunda. While his followers began their gory rampage, they were initially ignored by Hive Arcos’ noble rulers. This allowed the meat-mad followers of the God of Skin and Sinew to spread their abhorrent “faith” throughout the Underhive, and by that point, it was far too late. The Subjugator clades of the Palanite Enforcers were called in to quell the uprising, but they eventually failed and Hive Arcos became a filth-encrusted abattoir. As the thing that wore Xor’s face burst through him and devoured anyone nearby, the hive’s environmental seals were breached, allowing the toxic atmosphere of Necromunda to bring a final death to Hive Arcos. Now the hive stands as a skeletal, barren warning to the rulers of Necromunda. Its silent halls bear the legacy of the blood-crazed insanity that can spring from inattention and negligence.

So instead of territories or rackets being what the players are battling over, territories in the Uprising campaign are more part of the setting. Each gang starts with 3, and they really only exist to provide Income in the Insurrection phase and Meat in the Damnation phase (more on this later). Territories can change hands, but only if the gang that won the scenario took out three times as many enemy fighters as the loser. This is cool! It can happen, sure, but it won’t every game, and if you end up running away, you’re not gonna get screwed over. Also, there are only 12 territories this time around, unlike 26 in the Dominion or Law & Misrule campaigns, so things are a little easier to keep track of.

These changes are interesting at the very least. Instead of territory and influence being the goal of the campaign, Territories here are just part of the story. It seems like the Uprising campaign is more about the narrative of a hive falling apart than the mechanics of running a criminal empire in the Underhive. 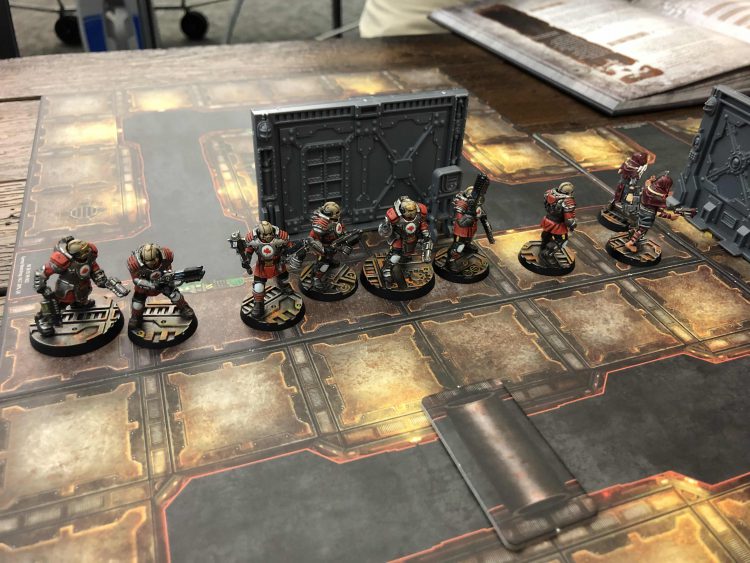 Instead of cops and robbers or house intrigue and politics, the factions in an Uprising campaign are a bit more cleanly drawn. You’re either Order, Chaos, or Unaligned (Much like in Law & Misrule, the usual suspects like Helot Cults and Enforcers don’t have an option). There are standard boons granted to each side for each game, but an overall tally of games won between all Chaos or Order players over the course of a Campaign Week determines which side has Ascendancy.

Ascendancy stands for the overall flow of the campaign. When Chaos is in Ascendency in the Insurrection phase, players have to randomly determine a territory to ruin. In addition, there are campaign-wide effects that occur based on whether Order or Chaos is in Ascendency. The Arbitrator will roll a d6 and consult one of two charts, for Order and Chaos, and that result affects every game in the campaign. These effects are generally pretty wild. A couple of examples:

While these effects aren’t game-breaking, they can easily change the course of a game or even the whole campaign. We think it’s a pretty cool mechanic, especially because campaign-wide effects like the ones outlined in the Book of Peril are almost never used. 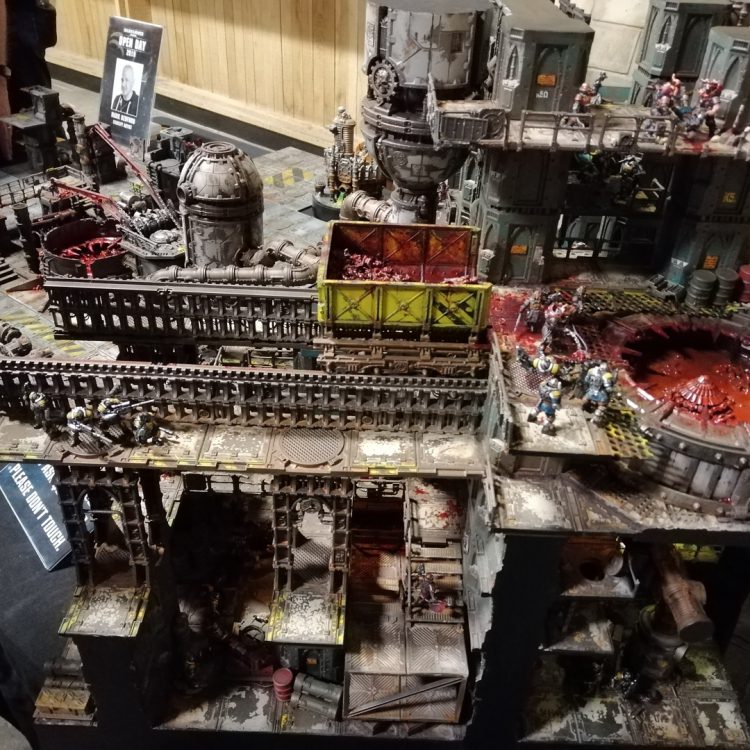 The Damnation Phase in action. Photo credit: jamstraptv via instagram.

The Insurrection phase plays similarly to the campaigns we’re used to, but the Damnation phase gets nuts fast. Income and credits are virtually useless at this point: the only thing anyone cares about is Meat. There are apparently no vegans in the Underhive. Gangs may not buy weapons from their house list, they have to take a special action to Scavenge for weapons as a post-battle action. Additionally, gangs can no longer recruit new gangers, hired guns, or hangers-on. We told you it was nuts. Instead of paying credits to the doc to save a critically injured fighter, the gang must pay the doctor in Meat. And finally, instead of selling captured fighters to the Guilders, gangs may convert their captives into Meat, which is very, very grim.

The Damnation phase also introduces the starvation mechanic. Each fighter needs 1 portion of meat before each battle. If they don’t get it, they fight at reduced Strength, but they can Cannibalise Seriously Injured enemies. If they do so, they’re no longer starving!

The final new introduction to the Damnation phase is Festering Injuries. These are the same as Mutations from the Book of Ruin, which we covered two weeks ago, but they can happen to any gang, not just Chaos ones. It’s a really cool mechanic that adds an “end of days” flavor to the phase.

The Damnation phase really stands out here. It is completely different from previous campaigns. We’re really excited to give it a go and see just how desperate our gangs can get!

We’re saving the biggest for last, here. In the Uprising campaign, there is no Trading Post or Black Market as vendors and Guilders have decided to close up shop and beat feet for safer climes. This means that gangs are all locked into their house lists for weapons and wargear. While Enforcers and Corpse Grinders will be familiar with this situation, House gangs may find this to be a somewhat crippling set of circumstances. However, we feel that this angle is excellent for newcomers to Necromunda. The Trading Post and Black Market are a labyrinth of dice rolls, weird rules, and ambiguous crap. New players will definitely benefit from not having to worry about it and getting a firm grasp on the core mechanics of Necromunda.

What’s not so great?

Not everything’s meat and no potatoes in the Uprising campaign, though. Starvation is neat with cool choices, but sacrificing your own dudes when you’re behind to let the rest of the guys maybe be slightly less shit when fighting gangs way ahead in rankings may feel even more punishing than usual. These survival mechanics encourage an earlier and larger snowball that doesn’t address the million dollar question with necromunda campaigns: HOW DO I KEEP THE PLAYERS AT THE BOTTOM FROM LOSING INTEREST IN THE GAME AND QUITTING? It’s definitely something for Arbitrators to think about.

Also, the vibe in this campaign is oppressively dark. It’s definitely not for the faint-of-heart. While Necromunda is not a fun place, the themes on display in the Uprising campaign might not be appropriate for every gamer. While the campaign is more accessible to newer players in a mechanical sense, the themes actually walk this back a bit.

So What Do I Need the Book of Ruin for?

Well, the Book of Ruin has several ways to adjust and expand the Uprising campaign. We’ll give some short synopses of them:

War of the Gods

Survivors of the Apocalypse

Rise of the four-armed emperor

The Big Question: Should you be playing this?

In a word: Absolutely. The Uprising campaign brings a whole new flavor to Necromunda campaigns that the other iterations cannot hope to replicate. The Dark Uprising box was already a must-buy for the models and terrain, but the campaign included in the box is well worth the purchase, too. The Damnation Phase alone is worth trying out an Uprising campaign. It’s guaranteed insanity every time!

That’s it for this week, Scummers! We’ll see you next week when we tackle Campaign Mission Selection and why it SUCKS. Until then remember to eat your vegetables! And as always, if you have any questions, comments, or feedback, feel free to drop us a vox in the comments below or email us at contact@goonhammer.com.